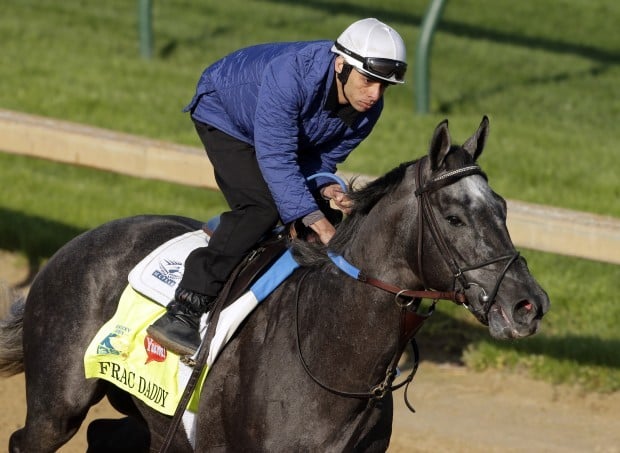 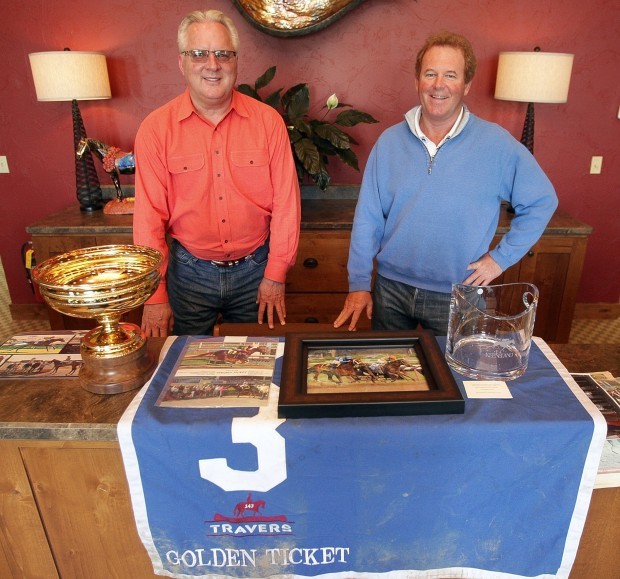 Ken Schlenker, left, and Carter Stewart of Billings, Mont., own a 3-year-old thoroughbred, Frac Daddy, that has qualified to run in the 139th Kentucky Derby on Saturday at Churchill Downs in Louisville, Ky. 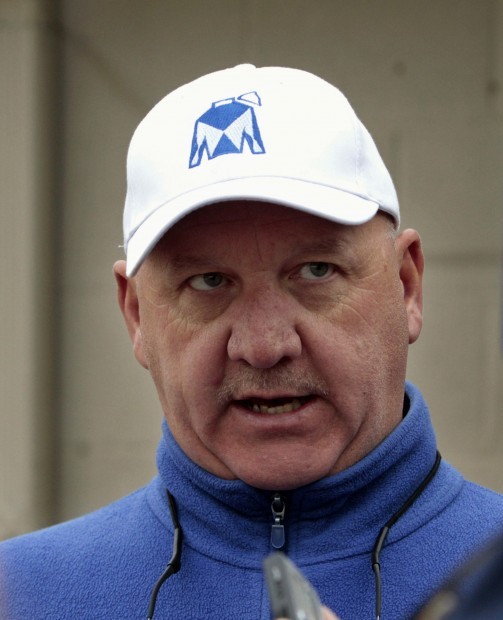 Trainer Kenny McPeek talks about his Kentucky Derby hopefuls, Frac Daddy and Java’s War, as he speaks with reporters at Churchill Downs on Saturday in Louisville, Ky.

By BILL BIGHAUS The Billings Gazette

BILLINGS, Mont. — Carter Stewart has been full of surprises over the years.

As a senior quarterback at Billings West in 1975, he unleashed a 52-yard touchdown pass on the game’s final play to beat rival Billings Senior 9-6 in front of a stunned crowd at Daylis Stadium.

Then two weekends ago, Frac Daddy, a 3-year-old thoroughbred he co-owns with Senior graduate Ken Schlenker, came out of nowhere to qualify for the fabled Kentucky Derby.

“[Trainer] Ken McPeek and I joke about having to call audibles at the line, change directions and then throw deep,” Stewart said with a laugh.

That’s exactly what they did recently in making a last-minute decision to enter the Kentucky-bred Frac Daddy in the $1 million Arkansas Derby with hopes of winding up at Churchill Downs.

The gray colt finished second to Overanalyze in front of a crowd of 66,158 in the Grade 1 stakes race at Oaklawn Park, earning enough points to secure a spot in the final field for the “Run for the Roses” on Saturday in Louisville, Ky.

“Oh boy, that was our goal, and we reached it in two years,” said the 55-year-old Stewart, a petroleum geologist in Billings. “We’re ecstatic. It’s every horseman’s dream to get in the Kentucky Derby.”

“We’ve had really good faith in this horse all along,” added Schlenker, 60, an independent petroleum land man. “He’s had a few medical issues, but when he’s shown his real colors, it was unbelievable.”

Stewart, who has been in the oil business since 1981, is the majority owner in Magic City Thoroughbred Partners, with Schlenker as a partner.

13 thoroughbreds, including 4-year-old Golden Ticket, which finished in a dead heat with favorite Alpha to win the $1 million Travers Stakes in New York last August after running on the Kentucky Derby undercard last May.

Frac Daddy, whose father, Scat Daddy, captured the 2007 Florida Derby and placed 18th in the 2007 Kentucky Derby, is also no stranger to the Churchill Downs track.

He won a maiden race there by over nine lengths last November, and also has a close second to his credit beneath the track’s Twin Spires. Frac Daddy arrived earlier this week to begin training with another McPeek horse, Blue Grass Stakes winner Java’s War, for the Derby.

“He loves the track,” Stewart said. “His best races have been at Churchill Downs.”

Stewart runs Cardinal Oil and Stewart Geological Inc. in Billings. Besides his oil business, Schlenker is an investor in Uberbrew, a downtown Billings brew pub.

When it comes to horse racing, their fast-rising stable was inspired, in part, by the success of the small partnerships of past Derby winners Funny Cide and Mine That Bird.

“It seems like it’s not always the big farms and stables that come through,” Stewart observed. “The little guy can get in there and have his day in the sun.”

It wasn’t that long ago, though, that Stewart was watching his thoroughbreds race at MetraPark’s Yellowstone Downs in Billings — and Schlenker was a regular at the betting window.

Then, Stewart said, he started thinking about how great it would be to have a horse running in the Kentucky Derby — and began implementing a plan.

Now, in rapid-fire fashion, Frac Daddy has proven he belongs among 20 of the sport’s leading 3-year-old thoroughbreds, which will be racing 1 1/4 miles in the 139th Derby. It is also billed as the “greatest two minutes in sports.”

A crowd of about 165,000 is expected to be on hand — along with a nationwide TV audience. Stewart and Schlenker have already received their tickets for the owner’s box.

Both believe they could also wind up in the winner’s circle, even though early odds have Frac Daddy at 50-1.

That doesn’t bother Stewart, who said he has been a spectator at the Derby multiple times in recent years.

“A lot of these good horses get overlooked early, so I’m going to predict a Frac Daddy win.”

“Like Golden Ticket, he’s hung in there,” he said of Frac Daddy. “I don’t have any doubt in my mind that he can run with any one of those horses. Carter and I are in agreement that victory will be at hand.”

Stewart said Orb, which won the Florida Derby and Fountain of Youth races, will most likely be the horse to beat in the $2.2 million race.

“But on any given day, anything can happen in this business,” he added. “It seems to be evenly matched, and the type of race where a long shot can come out of it.”

Frac Daddy, who has had to overcome throat ulcers and a hoof injury in recent months, has made six career starts, with one first-place finish, three seconds and $288,116 in earnings — with $200,000 coming from the Arkansas Derby, which was one of the last major prep races.

He was purchased for $50,000 at the Keeneland (Ky.) Sale in September 2011, and is currently 15th on the top 20 list of leading point earners for the Kentucky Derby with 44. Forty of those points came from his runner-up finish in Arkansas.

“He comes from a great bloodline,” Schlenker said. “It just seems like he’s a horse that wants to get in the limelight.”

“Frac Daddy is a larger horse physically, and that can be a big advantage, especially in a 20-horse field,” Stewart said. “He can stay on the pace, and then he can deliver at the end, too. That’s big.”

McPeek, who lives in Kentucky and also knows his way around Churchill Downs, had Tejano Run finish second in the 1995 Kentucky Derby and a 70-1 shot Sarava capture the 2002 Belmont Stakes.

“We couldn’t ask for any more,” Stewart said of McPeek’s expertise and advice. “We’re basically placing a huge bet on Ken McPeek, and he’s delivering.”

Jockey Victor Lebron, who is a native of the Virgin Islands, will be in the saddle for his first Kentucky Derby.

While Frac Daddy has never been to Montana, the colt, Stewart and Schlenker have plenty of supporters in the state.

“I actually started in the racing business with Jill Lindell (owner of the Won 800 Casino & Sports Pub in Billings) and Kym Espy (a champion jockey at Yellowstone Downs),” Stewart said. “I owned my first horse with those two ladies.”

Stewart and Schlenker haven’t been partners in the racing industry for very long, but they’ve been friends for a long time and have worked together for years on oil field projects.

“Ken and I kind of consider this horse, named Frac Daddy with all the fracking going on, as a tribute to the oil field workers of America,” Stewart said.

“Everybody seems to know Frac Daddy,” Schlenker said. “On Derby Day, they’ll be serving a Frac Daddy beer at Uberbrew. He has a big following down there.”

Frac Daddy, the Kentucky-bred gray colt owned by Carter Stewart and Ken Schlenker of Billings, Mont., drew the outside No. 18 post position.

Before leaving for Louisville on Tuesday, the owners said they thought the strategy would be to run Frac Daddy "a little bit wide" early in the race to keep some of the dirt from flying in his face.

The draw appears to fit their game plan.

Stewart and Schlenker also said they wouldn't be discouraged by long odds -- now set at 50-1.

Asked if Frac Daddy, who has been galloping strongly in pre-race workouts, can win the Derby, Stewart replied, "Yes he can.

Where to watch the Kentucky Derby in Wyoming

Don your favorite hat and head to one of many Kentucky Derby parties today in Wyoming.

Ken Schlenker, left, and Carter Stewart of Billings, Mont., own a 3-year-old thoroughbred, Frac Daddy, that has qualified to run in the 139th Kentucky Derby on Saturday at Churchill Downs in Louisville, Ky.

Trainer Kenny McPeek talks about his Kentucky Derby hopefuls, Frac Daddy and Java’s War, as he speaks with reporters at Churchill Downs on Saturday in Louisville, Ky.