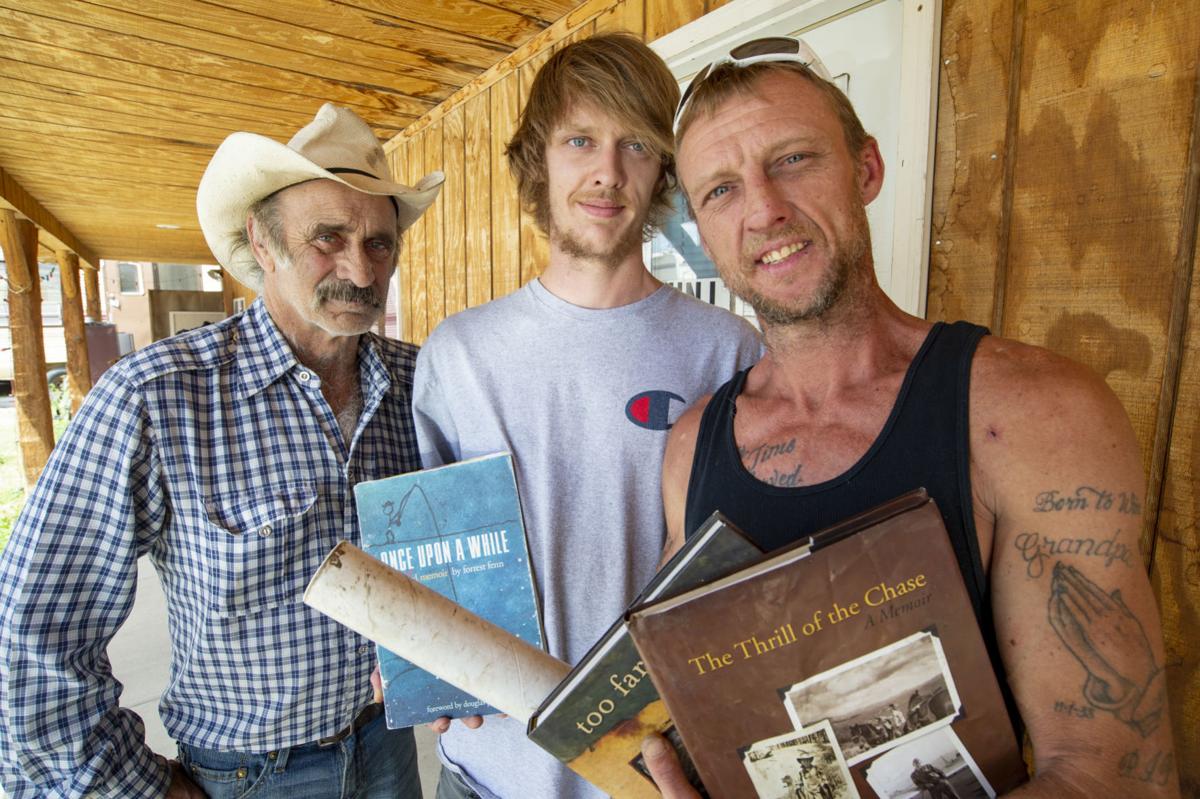 From right, Chris and Christopher Hurst and Bruce Wollschlager are seeking their portion of Forrest Fenn’s gold after they say they located the spot where the New Mexico art dealer hid his "treasure." Fenn announced June 6 that a cache of gold and jewels he hid somewhere in the Rocky Mountains had been found. 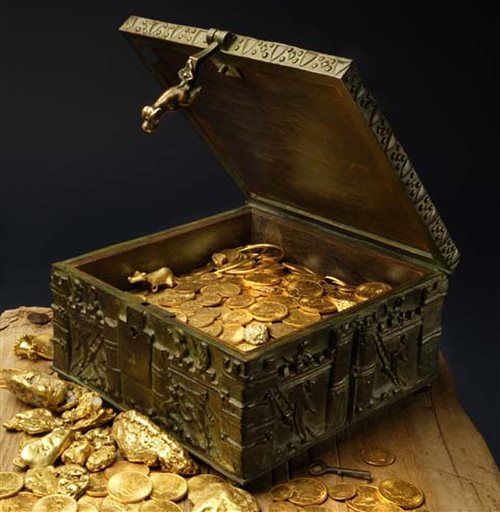 This undated photo provided by Forrest Fenn shows an estimated $2 million in gold jewelry and other artifacts that Fenn hid for treasures hunters to find.

POWELL — A father and son team from Cody claim they solved the clues left by Sante Fe, New Mexico, art dealer Forrest Fenn and are now waiting for their payoff of gold and jewels.

Chris and Christopher Hurst say that after presenting their evidence to Fenn, he announced later that same day that the hunt was over and the riddle solved.

It was on the evening of June 6 that Fenn announced that the treasure — a cache of gold and jewels reportedly worth somewhere between $1 million and $5 million — had been discovered.

“It was under a canopy of stars in the lush, forested vegetation of the Rocky Mountains and had not moved from the spot where I hid it more than 10 years ago,” Fenn said in a message posted to the blog of treasure hunter Dal Neitzel. “I congratulate the thousands of people who participated in the search and hope they will continue to be drawn by the promise of other discoveries.”

Fenn has said the finder is a man from “back East” whom he hadn’t communicated with since 2018. On Tuesday, Fenn shared photos of the chest and treasure, also posted to Neitzel’s blog, but he did not reveal the name of the finder or the location of the gold.

“The finder wants me to remain silent and I always said the finder gets to make those two calls,” Fenn said.

While many joined the search from New Mexico to Montana, the Hursts’ team had been searching for the treasure near the ghost town of Kirwin — a popular place for those hunting for the booty, according to Neitzel.

“The Kirwin area has been a popular search area since very soon after the search started,” Neitzel said.

The Hursts found no gold or jewels in the location.

“We called him and said, ‘Sir, we’re calling bluff,’” Christopher said; they say Fenn has refused to return their calls since announcing the end of the hunt.

The Hursts are originally from Florida but have lived in Cody for about 15 years. The two believe the treasure was the journey in finding the location. They say they presented Fenn with their evidence on June 5 — a follow-up to a call this winter when they were told to let the “snow melt and the mud dry before going after the treasure,” Chris said.

Now they want their gold.

Although Fenn has said he hid an actual chest full of gold coins, and shared images of the booty on Tuesday, the Hursts contend the hidden treasure was an experience and a history lesson. Now they would like Fenn to hand over the promised gold and jewels.

They spent tens of thousands of dollars hiring cartographers and renting equipment through the years, eventually matching clues left by Fenn to find the location they say is the end of the riddle’s journey.

Over the past four years, the Hursts have sold much of their assets, moved to a smaller home and had a benefactor helping in the search. Bruce Wollschlager, a businessman from Cody, has been helping to fund the efforts since “day one.”

The Hursts refuse to release the facts leading to their discovery until “our future isn’t in jeopardy by us telling the real stuff,” Chris said.

They are considering hiring legal representation to force Fenn to hand over the treasure and to protect their story, which they hope to recount in a future book deal.

The lack of details in Fenn’s public announcements has resulted in frustration among many of those who have followed the treasure hunt, some calling the story a hoax or an elaborate ruse to sell books and draw attention to Fenn’s business interests. Neitzel said the amount of people attempting to contact him since the announcement has been “overwhelming.”

Fenn answered a call on Friday, but refused to comment on details or about the Hursts’ claim to have solved the riddle, saying only that, “I do not wish to be interviewed at this time.”

Multiple unhappy treasure seekers have hounded the 89-year-old with lawsuits. Brian Erskine, of Prescott, Arizona, filed a lawsuit on May 26 claiming Fenn’s poem and clues constituted a written contract to deliver the treasure to whomever solved the riddle — and that he had solved it. The case remains pending.

In 2019, David Hanson of Colorado Springs, Colorado, sued Fenn for $1.5 million, claiming Fenn gave “conflicting and misleading clues in order to deliberately misdirect him away from the treasure.” (Erskine attempted to intervene in Hanson’s suit, as well, claiming he had a stake in the case.)

In February, Hanson sent a letter apologizing to Fenn and offering to close the case for $1. “Sorry for being so wrong and please accept my apology. I never needed $1.5 million for my kids … it was my own desire, not (God’s).”

“The Plaintiff is clearly plagued with regret over his decision to drop his case,” the judge wrote, but he said the rule of civil procedure cited by Hanson “is not the cure for his affliction.”

Most recently, Chicago attorney Barbara Andersen filed an injunction seeking damages in the U.S. District Court of New Mexico on June 6. She alleges she solved the puzzle but her information was stolen by an unknown person, who then used that information to find the treasure. The defendants in her suit are Fenn and an unknown man.

Andersen said she was harassed by the unknown man, who texted her multiple comments about “her private body parts” and eventually found the treasure first.

“It will be evident that the unknown defendant found the treasure by stalking/following Andersen and not of his own accord,” she claims in the filing.

Many people have gone to extreme lengths to find the treasure over the years. Five deaths have been attributed to the search, including one death in Yellowstone National Park. Others have been rescued by authorities after becoming trapped, lost or injured, including on several occasions in Park County and inside the park.

A couple from Virginia, Madilina L. Taylor and boyfriend Frank E. Rose Jr., had to receive assistance from search and rescue crews in 2013, 2015 and 2016 after trying to find Fenn’s fortune in the Wapiti area and Shoshone National Forest. After a trip in July 2016 resulted in encounters with grizzly bears, Taylor reportedly told the sheriff’s office that “she was headed back East with no intentions of ever returning.”

Then in early June 2018, Jeff Murphy, a 53-year-old from Batavia, Illinois was searching for the treasure near Yellowstone’s Turkey Pen Peak when he accidentally fell to his death.

David Christensen, of Winamac, Indiana, had to be rescued by park rangers after illegally rappelling into the Grand Canyon of the Yellowstone in search of the Fenn gold last winter. He remained convinced that he had the correct solution to the riddle.

After a 52-year-old pastor from Grand Junction, Colorado, died while searching for the treasure in the Rio Grande Gorge in 2017, New Mexico State Police asked Fenn to call off the search for the gold and jewels.

“Fenn told that sheriff right along with the world there’s been hundreds of thousands of people that invested time, money, heart, soul, blood, sweat and tears,” Chris Hurst said. “’Why would I call it now? It’s just too unfair for them.’”

The state's 48 school districts are all required to submit their own plans in accordance with the guidelines in the coming weeks.

From right, Chris and Christopher Hurst and Bruce Wollschlager are seeking their portion of Forrest Fenn’s gold after they say they located the spot where the New Mexico art dealer hid his "treasure." Fenn announced June 6 that a cache of gold and jewels he hid somewhere in the Rocky Mountains had been found.

This undated photo provided by Forrest Fenn shows an estimated $2 million in gold jewelry and other artifacts that Fenn hid for treasures hunters to find.