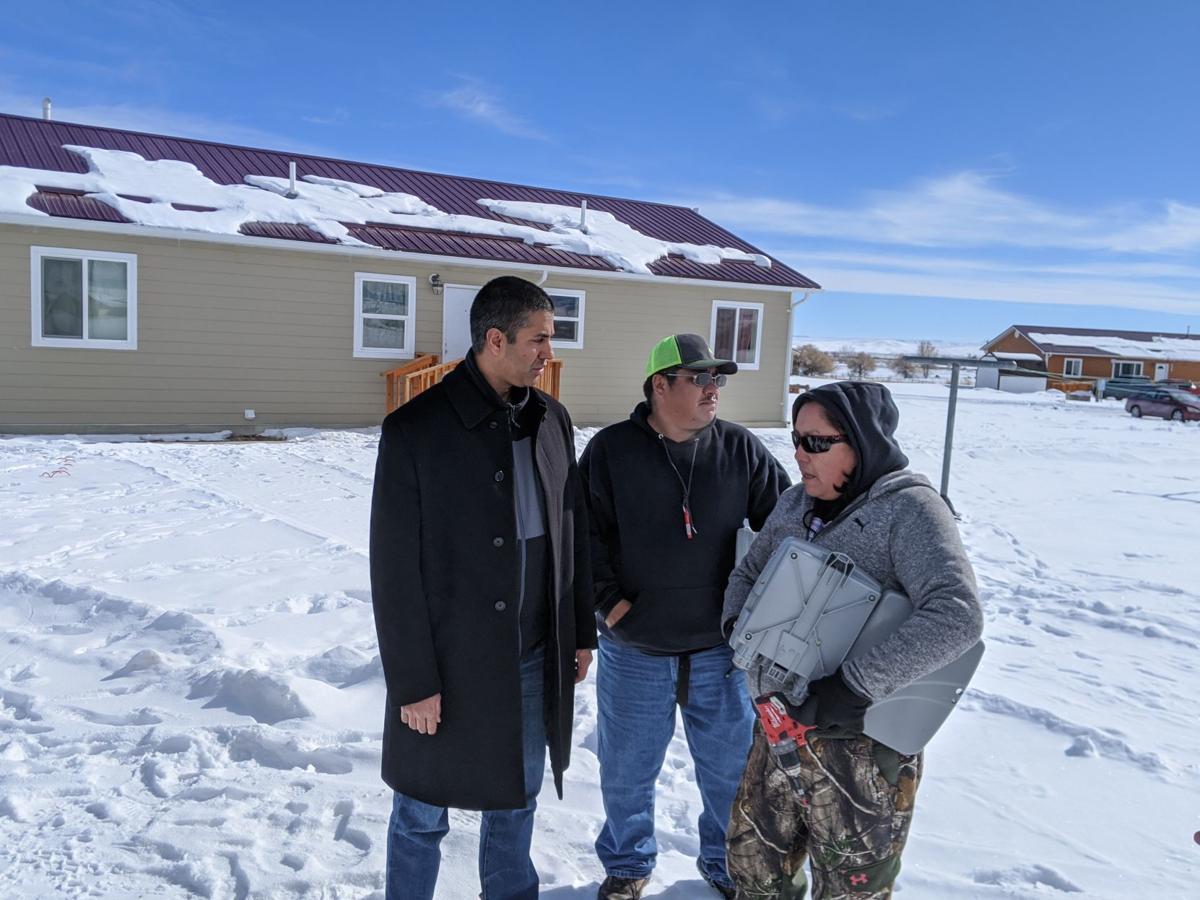 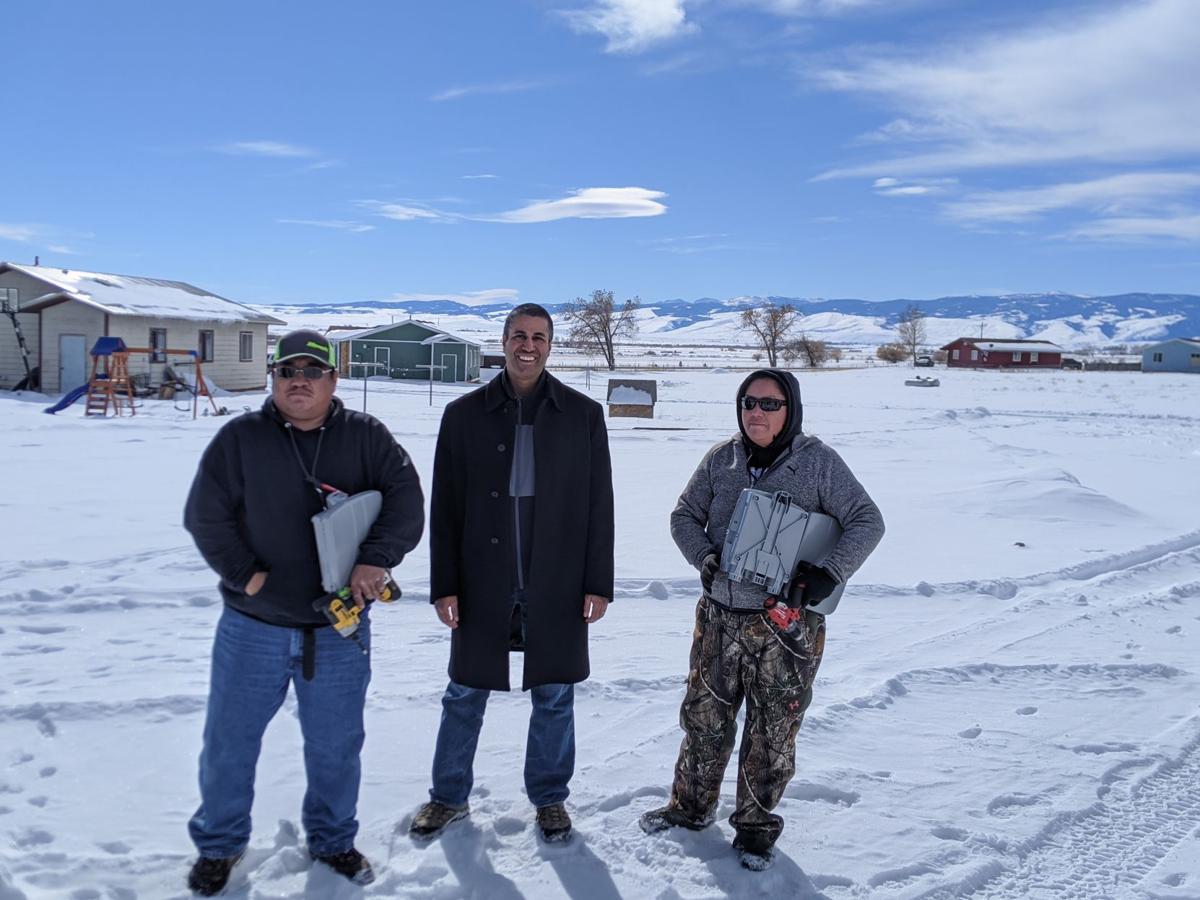 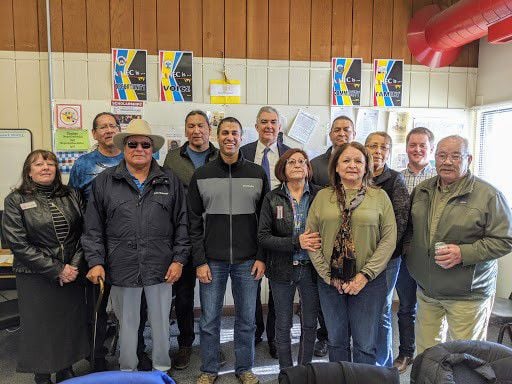 ETHETE — As more homes on tribal lands are poised to gain access to high-speed internet, a top federal official visited the Wind River Reservation on Tuesday to view the project’s progress and discuss the need for improved internet access for tribal members.

Following the announcement of a $4.1 million grant from the Federal Communications Commission in August, FCC Chairman Ajit Pai toured areas that will benefit from lightning-fast, federally funded broadband internet while hearing from tribal leaders and other community members about the benefits of better internet access.

“To come out here to the Wind River Reservation and see how FCC funding … is helping connect folks on this rural, tribal reservation is incredible,” Pai said in an interview on Tuesday. “And to hear from some of the individuals here who have developed the skills to enable them to build this infrastructure, and to hear how consumers are benefiting from it — how kids are able to do homework at home, businesswomen and men can work from home — it’s just a great illustration of the power of the internet.”

The money will help the Northern Arapaho Tribe’s Wind River Internet to connect about 850 homes on the reservation to the speedy internet over the next few years, with plans to hopefully give approximately 3,000 homes on the reservation the ability to connect through fiber-optic cables. Overall, the project will cost about $12 million, with those involved saying Tuesday that they’ll be looking for grants and other ways to help pay for the project.

The money was part of the FCC’s Connect America Fund, which aims to improve broadband access in rural America. Pai’s visit also came after the FCC voted to establish a $20.4 billion Rural Digital Opportunity Fund to increase broadband deployment in rural America and on tribal lands, a top priority of the federal agency.

“The internet and other next generation technologies are intertwined with virtually everything we do now,” Pai said. “All of these things require internet access and that’s part of the reason why it’s so important to get the millions of Americans who have not been able to benefit from the digital revolution on to the network, and disproportionately that’s a rural problem.”

The Eastern Shoshone Tribe's buffalo representative was among those advocating in Washington this week for a bill that would provide money and support to tribes as they reestablish bison herds on their lands.

As of last fall, 280 homes in Arapaho have the ability to connect to the high-speed broadband internet, said Patrick Lawson, executive manager of Wind River Tribal Industries, which operates Wind River Internet. He said about 120 of those homes have signed up for service.

Wind River Internet, which recently opened an office in Riverton, also provides fiber broadband to the city’s main street. Owned by the Northern Arapaho Tribe, Wind River Internet is one of about 15 tribally owned telecommunications and internet providers in the U.S.

Lawson said leaders from both Wind River tribes support the project. Indigenous people and nations have typically been bypassed for the most updated technology by internet providers in the past, he said, adding that the tribe’s project will ensure that reservation residents have not only top-notch internet speeds by today’s standards but also the ability to keep up as technology evolves.

The legislation would give the committee the power to introduce legislation, a major step for a group that has essentially served in an advisory role to the Legislature.

“We’re basically talking about getting the reservation up to speed in terms of internet, so that the citizens, the people that live out here, aren’t left behind,” Lawson said. “The neighboring communities have pretty decent connections. … There’s a lot of areas on the reservation that have little to no internet or internet that just really isn’t good enough to keep up with the demands of today’s needs.”

On Wind River, Lawson estimated that about one-third of homes have internet access through the tribe’s service. He said others — though probably not many — could have an internet subscription through other providers.

The tribe says those living on the Wind River Reservation, especially youth, don't have enough options for safe and up-to-date recreational activities or access to parks and trails.

Download speeds for the new broadband internet will reach at least 1 gigabit per second, with upload speeds hitting 500 megabits per second, according to an August press release about the federal award.

Those speeds will be significantly faster than the internet that many Wyoming residents currently use. According to a state Broadband Advisory Council map of internet speeds created from surveys submitted by more about 2,700 Wyomingites, download speeds currently average a little less than 30 megabits per second, while upload speeds average about 13 megabits per second in the state.

Standing outside of a tribal housing cluster on Tuesday afternoon with Pai and others, Wind River Internet employee Marcus Friday said everybody he helps connect to the faster internet — especially children because they can play and download games at faster speeds — has been happy with the service.

As both Wind River Reservation tribes grapple with a housing crisis, the Northern Arapaho's grant -- part of almost $200 million in HUD money recently awarded to more than 50 tribes -- will be used to build 20 homes for tribal citizens.

“Everybody in the house one way or another loves it — somebody likes sports, some do homework,” he said. “So it’s good all the way around. Kids love the games.”

Pai said his trip to Wyoming wouldn’t end with Tuesday’s tour of the reservation. He will travel to Glenrock to tour a farm that’s an example of one using technology and fast internet to be more sustainable and environmentally friendly. Pai said he also will meet with Gov. Mark Gordon and lawmakers in Cheyenne to discuss internet access on Wednesday.

Tribal housing officials and others spoke with residents of the Wind River Reservation about what's being done to help fix a housing shortage amid challenges like securing federal funding and a young, growing population.

Can Wyoming regulate the internet? Its Legislature is trying.

Wyoming is moving forward with a number of bills intended to tame the Wild West of the digital world. But will it be successful?

Eastern Shoshone and Northern Arapaho landowners will soon get offers to sell their land, allotted to ancestors generations ago, back to the tribes so it can be used more beneficially.

The three-year grant, awarded to the Wyoming Soccer Association, will be used to create and grow a soccer program on the Wind River Reservation, with the Boys & Girls Club in Fort Washakie hosting the program.

With more people cooped up at home, some internet providers have seen up to four times more demand for speed upgrades or new connections.