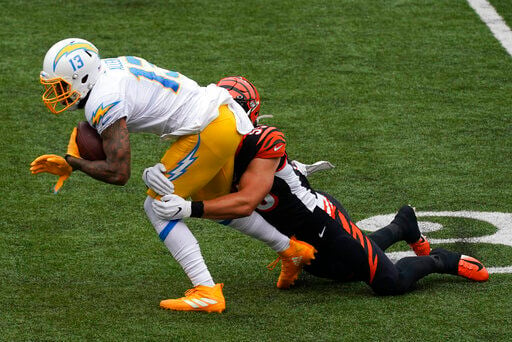 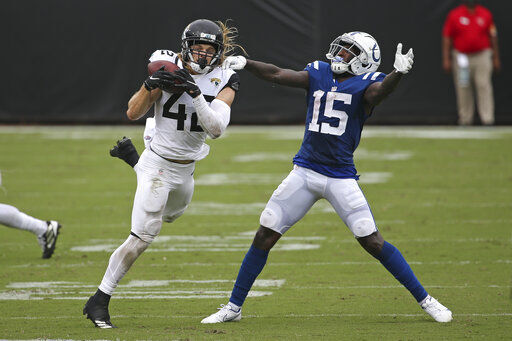 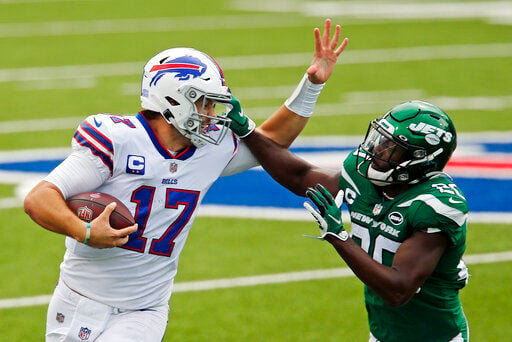 Buffalo Bills quarterback Josh Allen is pushed out of bounds by New York Jets free safety Marcus Maye during their game Sunday in Orchard Park, N.Y., Allen was a two-year starter for the Wyoming Cowboys.

Josh Allen threw for more than 300 yards and two touchdowns and added another score on the ground. Andrew Wingard came up with game-sealing interception. Carl Granderson recorded a sack and forced a fumble. And Logan Wilson, Brian Hill, Marcus Epps and Jacob Hollister all made contributions.

But this wasn’t the 2016 Wyoming Cowboys taking the field at War Memorial Stadium. No, it was the opening weekend of the 2020 NFL season. And those seven players, along with former Cowboys Tashaun Gipson and Eddie Yarbrough, all found their way into the final stat sheets Sunday. And when Mike Purcell takes the field as the starting nose tackle for the Denver Broncos on Monday night, that will make it a record 10 former Cowboys who played in the NFL openers.

Allen had the most impressive day. The third-year starting quarterback for the Buffalo Bills completed 22 of 46 passes for 312 yards (all personal NFL best) and two touchdowns in a 27-17 victory over the New York Jets. Allen also rushed for a team-best 57 yards and a score.

And New Orleans Saints defensive end Carl Granderson might have had the most memorable play. Granderson added his name to the list of players who have sacked future Hall of Famer Tom Brady when he got the Tampa Bay quarterback for a 6-yard loss and jarred the ball loose. Even though Brady recovered the fumble the Saints held on for the 34-23 victory.

Wilson, a Natrona County High graduate, made his NFL debut for the Cincinnati Bengals at linebacker and had two tackles in the Bengals’ 16-13 loss to the Los Angeles Chargers. Wilson is listed as the Bengals’ second-string Sam linebacker.

In Seattle’s 38-25 victory over Atlanta, Seahawks’ tight end Hollister caught one pass for 9 yards and Falcons’ running back Hill ran for 12 yards and caught two passes for 8 yards.

Gipson, a free safety entering his ninth NFL season, finished with seven tackles in helping Chicago rally for a 27-23 victory against Detroit.

Epps, a safety for Philadelphia, and Yarbrough, a defensive end for Minnesota, both had two tackles.

Police say the protester, who was uninjured, complied with an officer's attempt to get him out of the street, but a separate law enforcement agency later cited him in connection with the incident.

Buffalo Bills quarterback Josh Allen is pushed out of bounds by New York Jets free safety Marcus Maye during their game Sunday in Orchard Park, N.Y., Allen was a two-year starter for the Wyoming Cowboys.