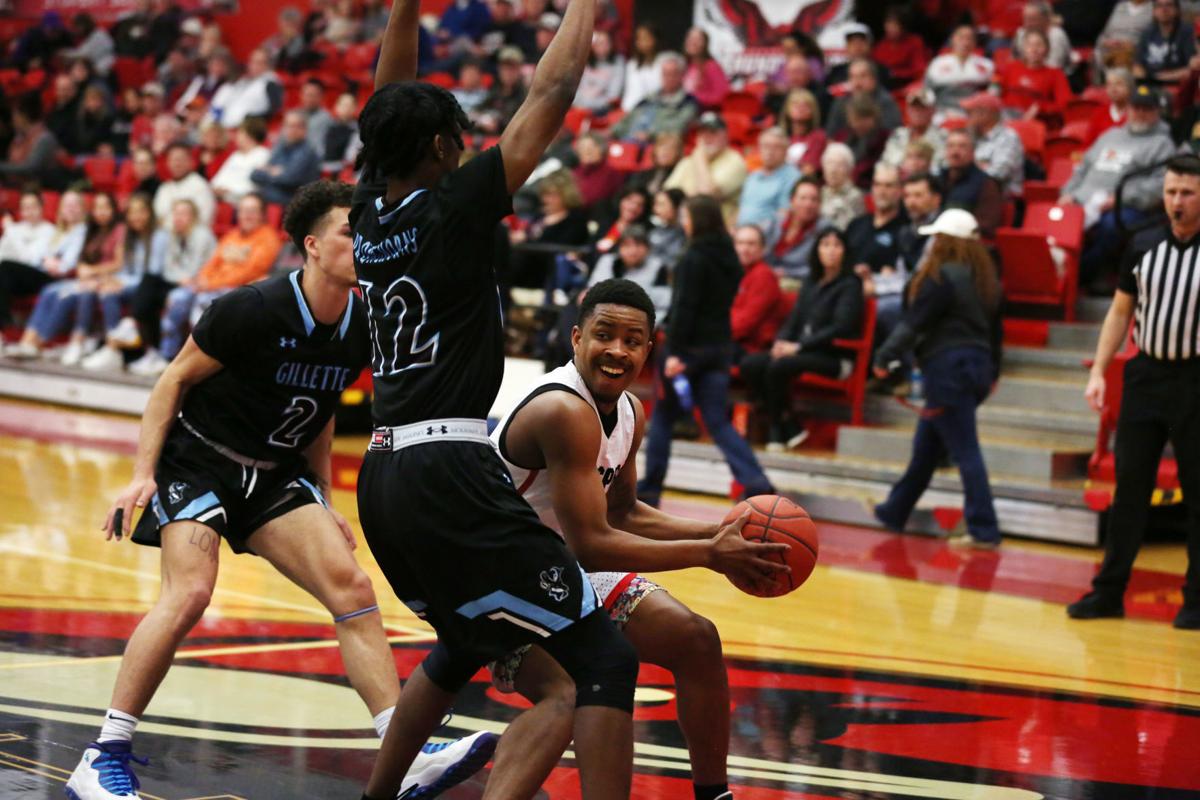 Casper College's Jalen Harris looks for an open teammate while being defended by Gillette College's Gary Solomon on Feb. 19 at Swede Erickson Thunderbird Gym in Casper. Gillette College and Sheridan College announced last month they would eliminate all of their athletics programs, with the exception of rodeo. 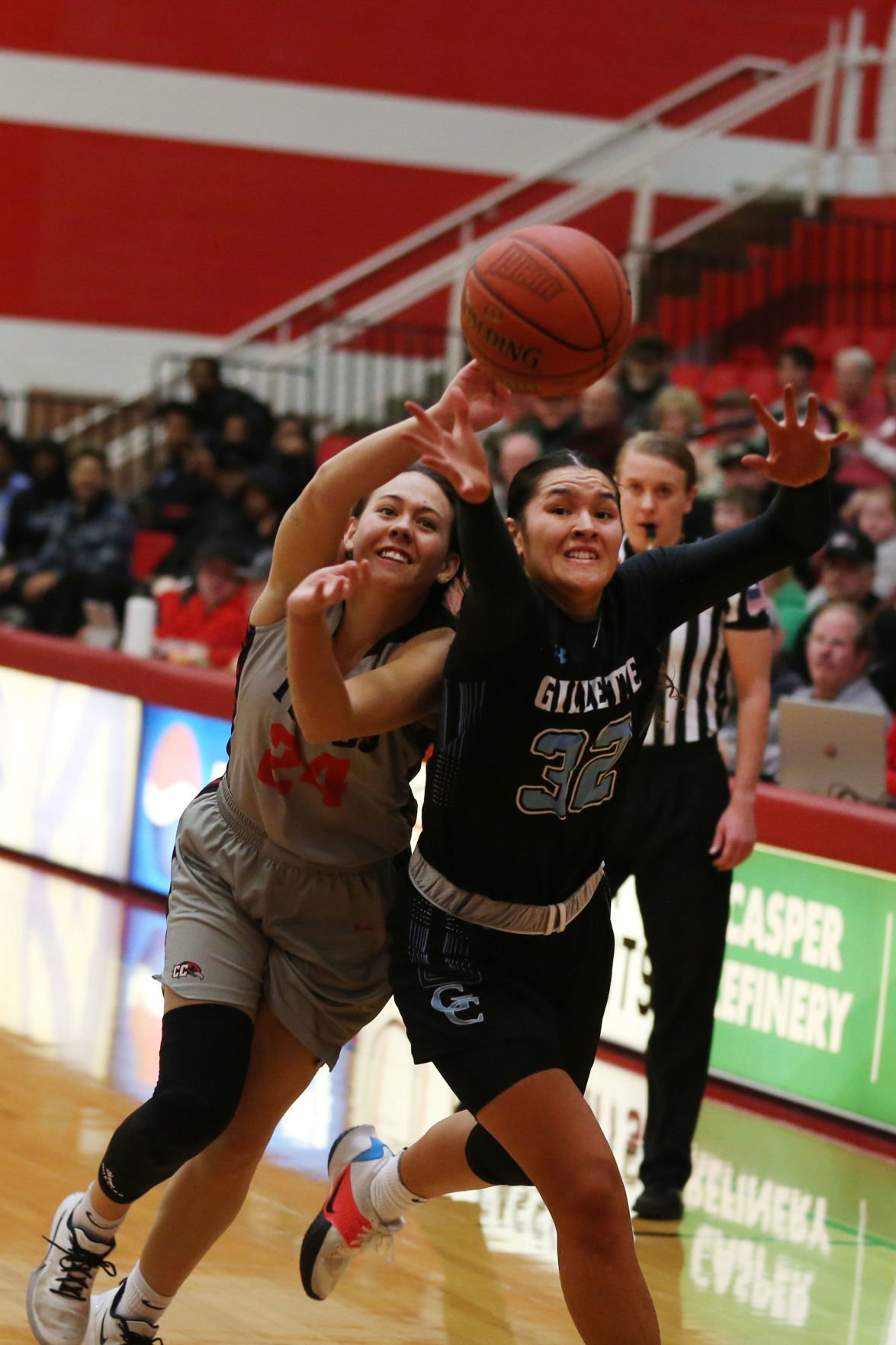 The Northern Wyoming Community College District, in a statement released late Thursday afternoon, said cutting the athletic programs at both schools was part of a $3.96 million reduction prompted by the COVID-19 pandemic and imminent cuts from the state of Wyoming, which is facing a dramatic decline in revenue.

“This decision was far from easy and definitely not something we wanted to take away from our student-athletes,” college district President Walter Tribley said in a statement. “However, we simply cannot maintain a vision that includes full-time coaches, full-ride athletic scholarships coming from our general fund, and expensive recruitment and travel.”

Eliminating the colleges’ NJCAA Division I teams is expected to save the district, which includes both Gillette and Sheridan colleges, $2.8 million. The district also discontinued the Culinary Arts and Hospitality Management programs and cut the budgets of the campus police and district administration.

The district laid off 16 people as part of the cuts. Another seven unfilled positions will be eliminated.

Officials hope long term to bring back additional athletic opportunities via NJCAA Division III teams, according to the statement. Rodeo teams at both schools will continue, but with significantly smaller budgets.

In his statement, Tribley stressed that the programs were not cut because they were failing. Rather, they were chosen because their cost relative to the revenue they generated made them unsustainable amid a financial crisis.

“Our number one priority is our students. While these decisions will impact some students directly, it is the best way forward for our District to minimize negative impacts to the majority of our students,” Tribley said.

Phone calls and emails sent to various coaches and officials at both Gillette College and Sheridan College, which are sister schools in the Northern Wyoming Community College District, were not returned on Thursday. However, some took to social media afterwards to express their feelings.

“I’m gutted for all those involved with Gillette College athletics,” former Gillette College women’s soccer coach Nate Ulness, who is now the head coach at Laramie County Community College, posted on Twitter. “I’ve made many lifelong friends there and wish the best for the players. There is more history to be written with those programs!!”

In separate tweets, the Gillette College men’s and women’s basketball teams thanked the local community for their support over the years. The women’s team finished No. 21 in the nation this year while the men’s team won Region IX titles in 2016-17.

Word of the firings traveled quickly around the state.

“There was no indication that this was going to happen,” Casper College men’s basketball coach Shaun Gutting said. “We were sitting in a CPR re-certification training class this morning and all of a sudden I was getting texts left and right from coaches.

“Their coaches were in a meeting yesterday, trying to figure out upcoming schedules and how we are going to operate with the COVID (pandemic), so they had no idea this was going to happen. It kind of puts a damper on everything.”

“This came as a complete shocker to everyone,” said Dwight Gunnare, the head women’s basketball coach at Casper College.

Not only does Thursday’s decision leave a number of coaches and assistant coaches without jobs, but it also could leave a number of student-athletes at both schools without a sport to play in the upcoming school year. While both Gillette College and Sheridan College are expected to honor athletic scholarships, no official word has been made regarding that decision. Nearly 20 in-state athletes had officially committed to either Sheridan College or Gillette College, according to the Star-Tribune’s 2020 recruiting tracker, and both schools already had a number of in-state athletes on their respective rosters.

“Now those kids have to try to find somewhere else to go,” Gutting said. “It’s one of those decision where you wonder if the powers that be actually realize how many people it is going to affect. Not only does it affect the coaches and the players, but it affects the entire region.”

Both Gutting and Gunnare stated that there has been no discussion of eliminating athletic programs at Casper College. Likewise, there were no reports of any athletic programs being eliminated at any of the state’s other junior colleges.

The biggest challenge right now for coaches and administrators is figuring out game schedules.

Former Gillette College standout will play for the University of Texas next year.

Casper College's Jalen Harris looks for an open teammate while being defended by Gillette College's Gary Solomon on Feb. 19 at Swede Erickson Thunderbird Gym in Casper. Gillette College and Sheridan College announced last month they would eliminate all of their athletics programs, with the exception of rodeo.