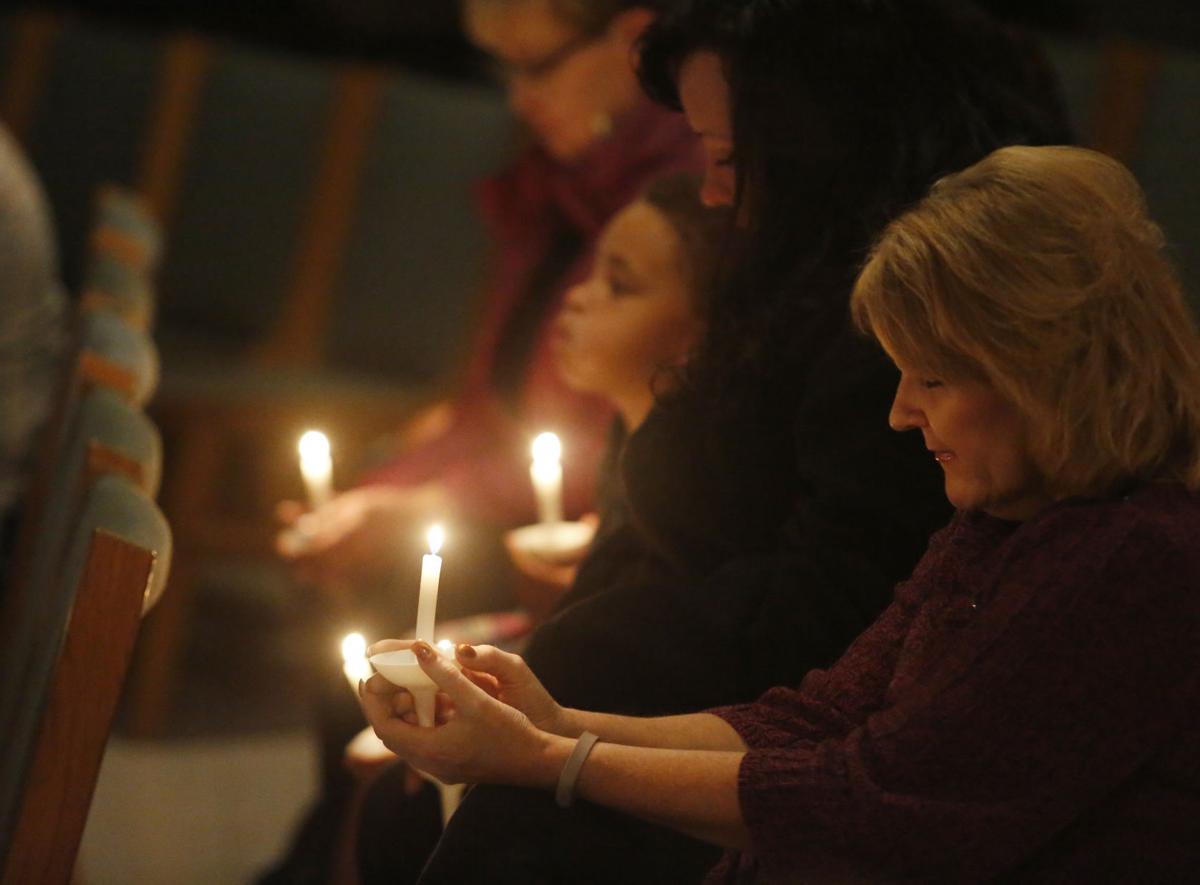 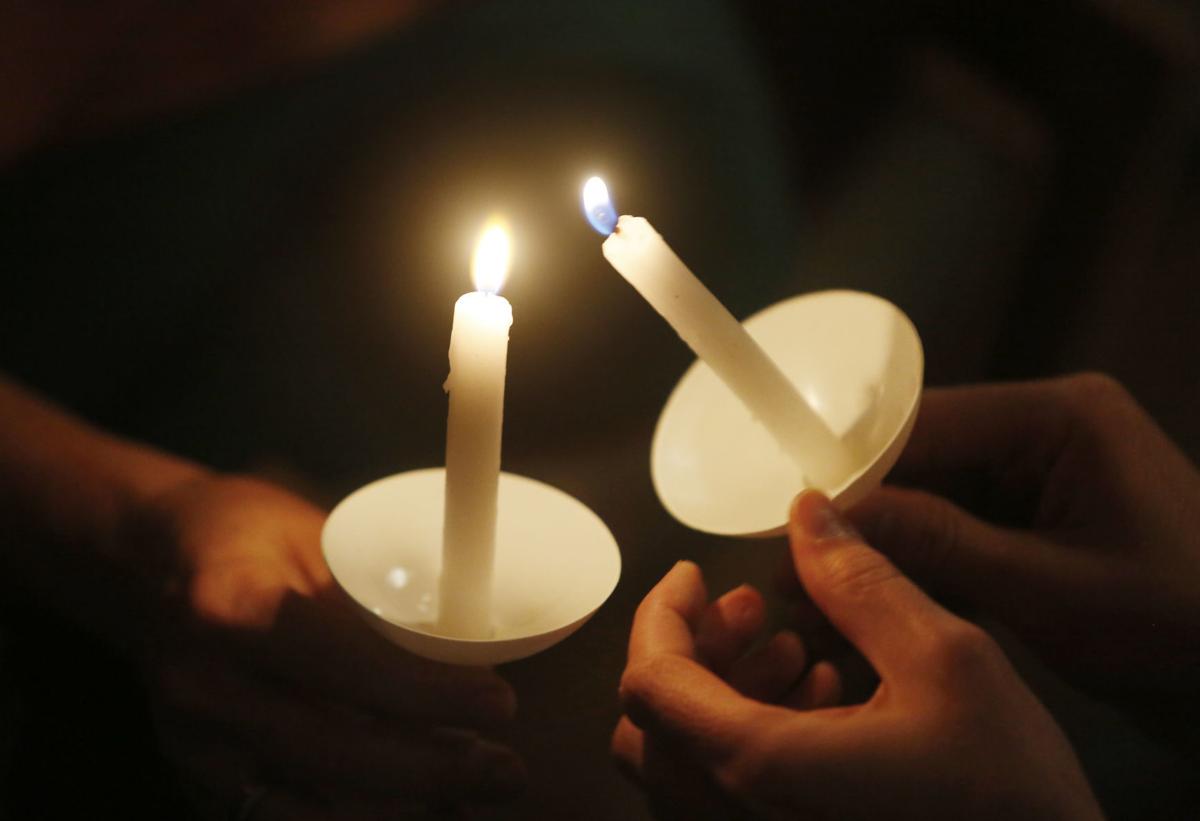 People light candles Monday night during a vigil for victims of the Las Vegas shooting. 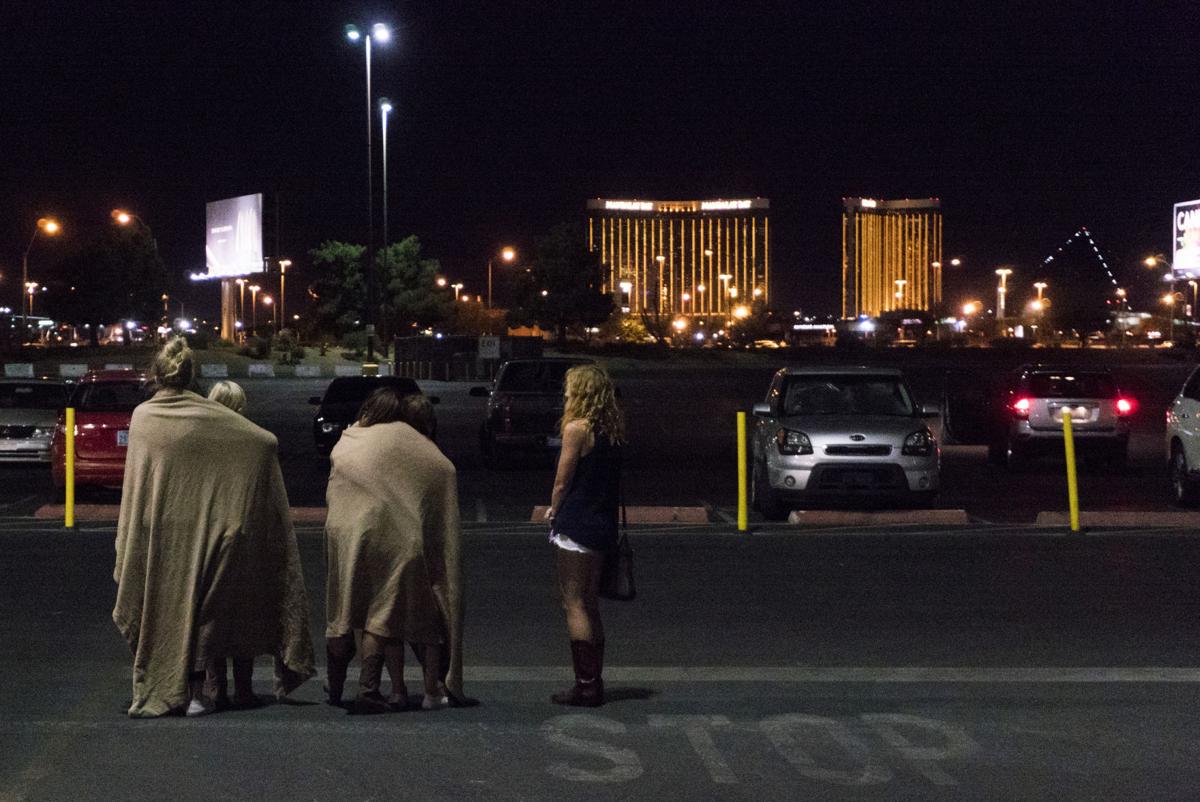 A group of women wait for their ride Monday outside the Thomas & Mack Center, which served as a refuge following a mass shooting at the Route 91 music festival along the Las Vegas Strip. 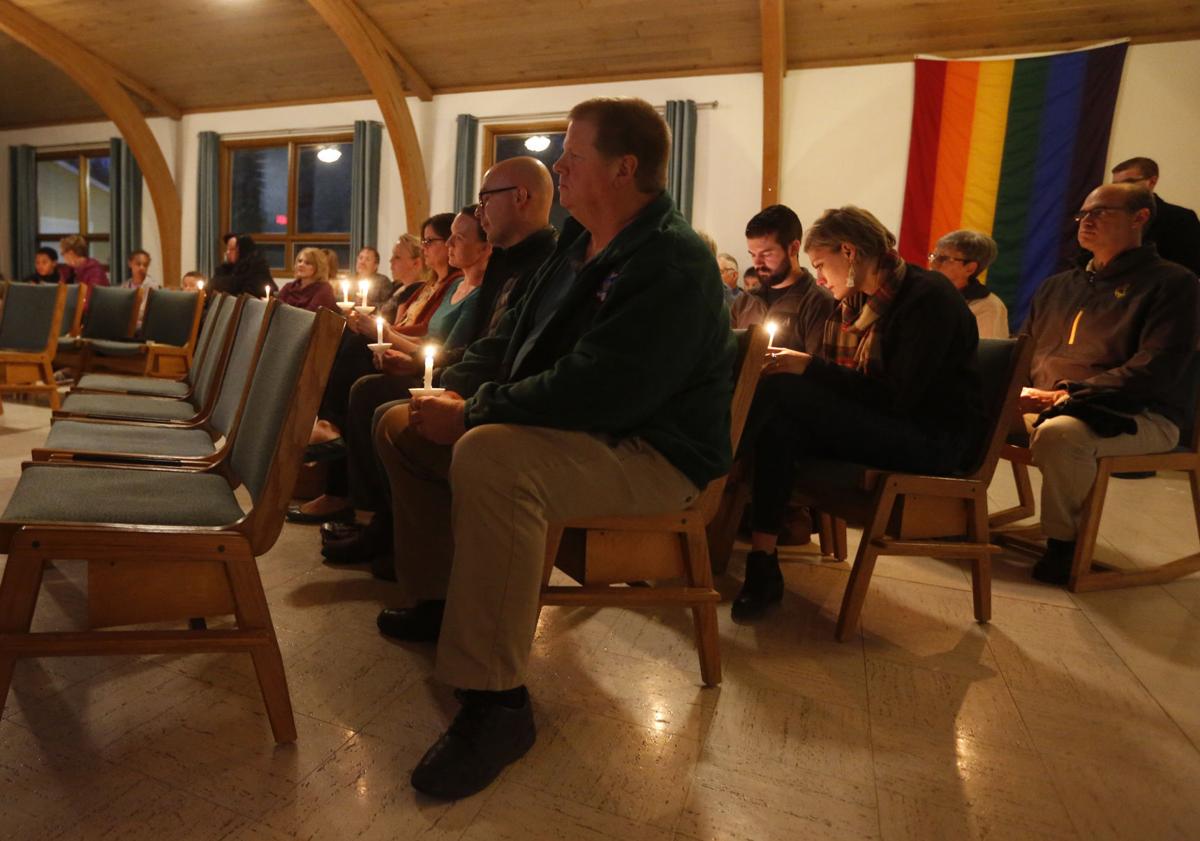 Campbell County firefighter Bayelee Burton was returning from the restroom Sunday night when he first heard the popping noise.

It wasn't until the noise started again and the music stopped that the 20-year-old Gillette man realized the noise was more than a cap gun or fireworks. He fell to the ground as the bullets sliced through the crowd of more than 22,000 people at the Jason Aldean concert, the culmination of a three-day country music festival in Las Vegas. The smooth country pop was replaced by the sound of screams.

The shots stopped and Burton crawled forward, looking for shelter from the attack. He froze when they started again and crawled when they stopped, all the while trying to help those around him.

Finally, he paused his escape. Crouched behind a cart used to haul supplies, he took stock of the situation.

People in cowboy boots and hats walked with blood on their skin and clothes. Gates were toppled in the chaos as the crowds attempted to flee the gunman's attack, which killed at least 59 fellow concertgoers and injured more than 520.

He didn't yet know that his father, 50-year-old Clint Burton, had been shot in the leg. For hours, he wouldn't know where the rest of his family — his mom, aunt, uncle and three cousins — were hiding or if they were alive.

Then, Burton went to work.

Burton moved to a nearby gas station, where an injured man had been taken in a wheelbarrow. He stopped to give the man CPR — he had just been certified on Wednesday — but the man died. He went back into the complex, dodging teams carrying the injured and dead on metal gates and tables, and helped rescue people still hiding behind folding chairs and in portable toilets. He held IV bags in the first aid-tent-turned-makeshift-emergency-room and searched for scant medical supplies.

After a while, he retired to his room in the nearby Excalibur hotel. He connected with the rest of his family, who were on lockdown in a hotel across the street. They were all uninjured, but nobody had heard from his dad.

It wasn't until after midnight that they got a call from the hospital. Clint Burton had been shot in the back of his thigh but was conscious and stable. About 4:30 a.m., the family reunited at the hospital, United Medical Center.

By 6 p.m. Monday, Bayelee Burton was exhausted but relieved. His family was safe. Everyone was together. They were ready to go home to Gillette.

“It was just a crazy event. Crazy," Burton said. "Never would have thought something like that would have happened.”

For many Wyomingites, the lights and chaos of the Las Vegas strip offer a radical change from the silence of the sagebrush and dark nights of the mountains. It’s impossible to know how many Wyoming residents were at the concert Sunday night. But based on Vegas’ popularity as a weekend getaway and the state’s widespread love of country music, it’s a fair guess that the Cowboy State was well-represented in the crowd.

And so, the loved ones of the concertgoers were left in limbo late Sunday and early Monday as the news of the shooting broke.

They waited to hear from their wives, brothers and children who were at the concert. Waited to see if they would join the thousands of others across the country who have lost loved ones in seemingly senseless shootings.

Cheyenne resident Charis Kipper heard the news about 4:30 a.m. Monday: All five members of her family who attended the concert were alive.

Her sister, who was born and raised in Laramie but now lives in Nevada, as well as her niece and nephew and their spouses are big fans of country music and had been at the three-day Route 91 Harvest Festival since Friday.

Information about their whereabouts trickled through social media — they had all lost their phones in the scramble. Kipper spoke to her niece briefly but said the woman was still shaken.

Uncertainty remained for the family, however. Kipper's niece's husband, a firefighter in Lake Havasu City, Arizona, was shot in the leg while shielding his wife from the bullets.

He's stable, Kipper said, and is waiting for surgery while others in more serious condition are treated. All of her family members were still in Las Vegas on Monday morning.

“You just are happy that your family is OK, but still worried about what kind of mental state they were in and what they’re going through," Kipper said. "You wish you were closer.”

Monday night, once again, Casper residents gathered to remember those killed in a mass shooting, to pray for those who survived and to attempt to comprehend the unimaginable.

More than 30 people traveled through sleet and rain to gather in the dim light of the United Church of Christ's sanctuary for a candlelit vigil just before sunset. Rev. Dee Lundberg did not offer platitudes. She spoke to the difficulty of rationalizing evil, the need for change, the hard work that is grief and the necessity of pursuing peace, regardless of it all.

"We can't let this darkness win," she said. "That's unacceptable."

People in the crowd responded with questions of their own: How can we feel safe? How do we make sense of evil? How do you explain this world and its evils to your children, your grandchildren? How much do you let them know?

Is it bad that these shootings feel normal now?

Lundberg noted that Casperites had gathered in the same sanctuary a little more than a year ago after a gunman killed 49 people in an Orlando nightclub.

These vigils have become a dark American tradition — each rendition of flickering candles and bowed heads reminiscent of the last, though the victims’ names change and the blood-soaked venue is different.

A calendar item published in the Star-Tribune a few days after a gunman killed 26 at Sandy Hook Elementary School in December 2012 lists numerous recipients of one such remembrance: “A candlelight vigil in honor of the victims of recent violence in Casper, Connecticut, Oregon and Colorado will be held at 6 p.m. Friday at Conwell Park.”

At the end of the service Monday, the group passed flames from white candle to white candle, like so many before them.

Then the 30 people, young and old, bowed their heads over their dripping, glowing candles and sat, the only noise the battering of the storm outside.

How to donate blood in wake of shooting

Want to donate blood in the wake of the mass shooting in Las Vegas? United Blood Services in Casper and Cheyenne are accepting donations.

The company said its center in Las Vegas has provided almost 200 units of blood and blood products to hospitals treating shooting victims, according to a news release. So far, they haven't needed blood from other areas, but the Wyoming branches are ready to provide more supplies if needed.

“We understand that people want to come forward now to show their support, however, to effectively manage the blood supply for patients, we are asking donors to make appointments to give blood throughout the coming days and weeks," Anne Burtchaell, division president for United Blood Services, said in the release.

The blood types O-positive, O-negative and platelet donations are always most needed during tragedies, the nonprofit said.

To schedule an appointment in Casper or Cheyenne, call United Blood Services at 877-827-4376 or online at bloodhero.com.

Do you know a Wyoming resident who was at the concert in Las Vegas during the shooting? The Star-Tribune is attempting to contact Wyomingites who were there to hear about their experiences. Contact features editor Elise Schmelzer at 266-0574 or elise.schmelzer@trib.com if you or somebody you know was present.

Floating on a gondola through a Las Vegas hotel’s faux Venetian waterway Saturday evening, Daniel Davis got down on one knee and asked his gir…

For the past three years, Sarah Cox and her friends traveled to Las Vegas for the annual Route 91 country music festival.

People light candles Monday night during a vigil for victims of the Las Vegas shooting.

A group of women wait for their ride Monday outside the Thomas & Mack Center, which served as a refuge following a mass shooting at the Route 91 music festival along the Las Vegas Strip.