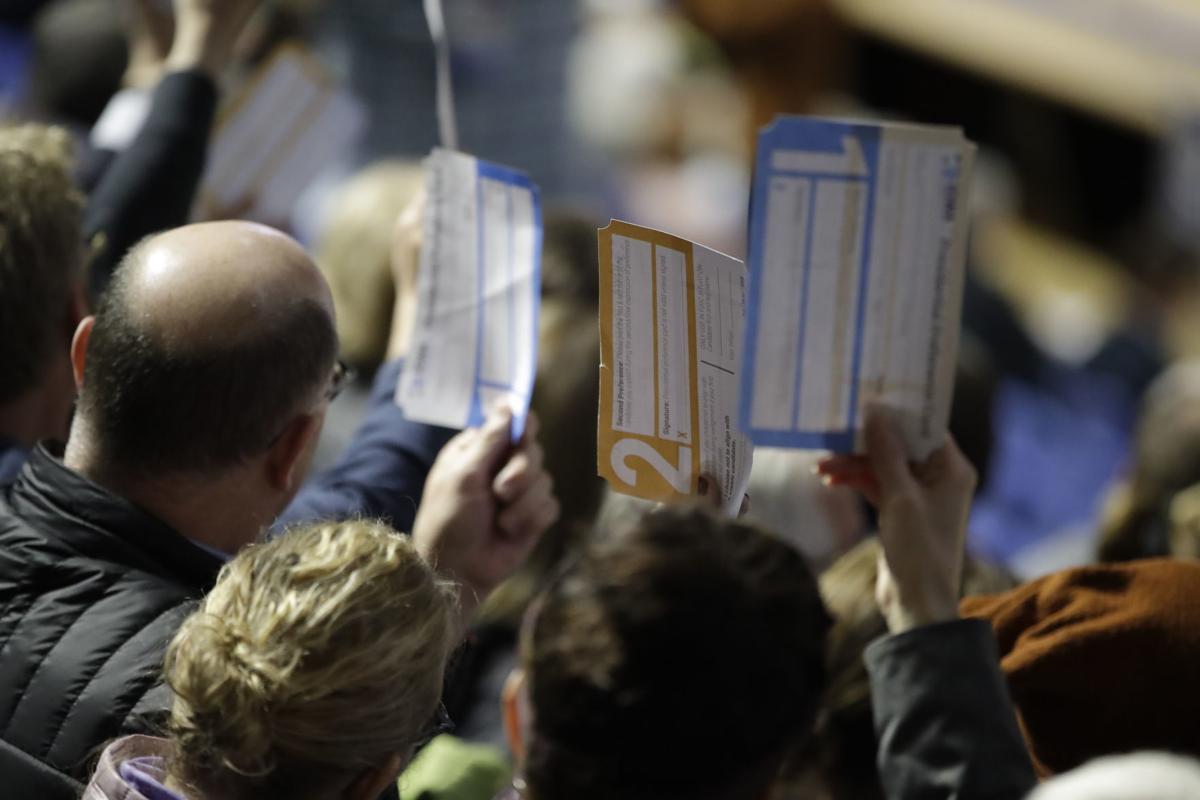 Precinct 68 Iowa Caucus voters seated in the Biden section hold up their first votes as they are counted Monday at the Knapp Center on the Drake University campus in Des Moines, Iowa. The Wyoming Democratic Party says it's confident the state — one of the few others that will also hold a caucus in 2020 — won't deal with the same problems Iowa did. 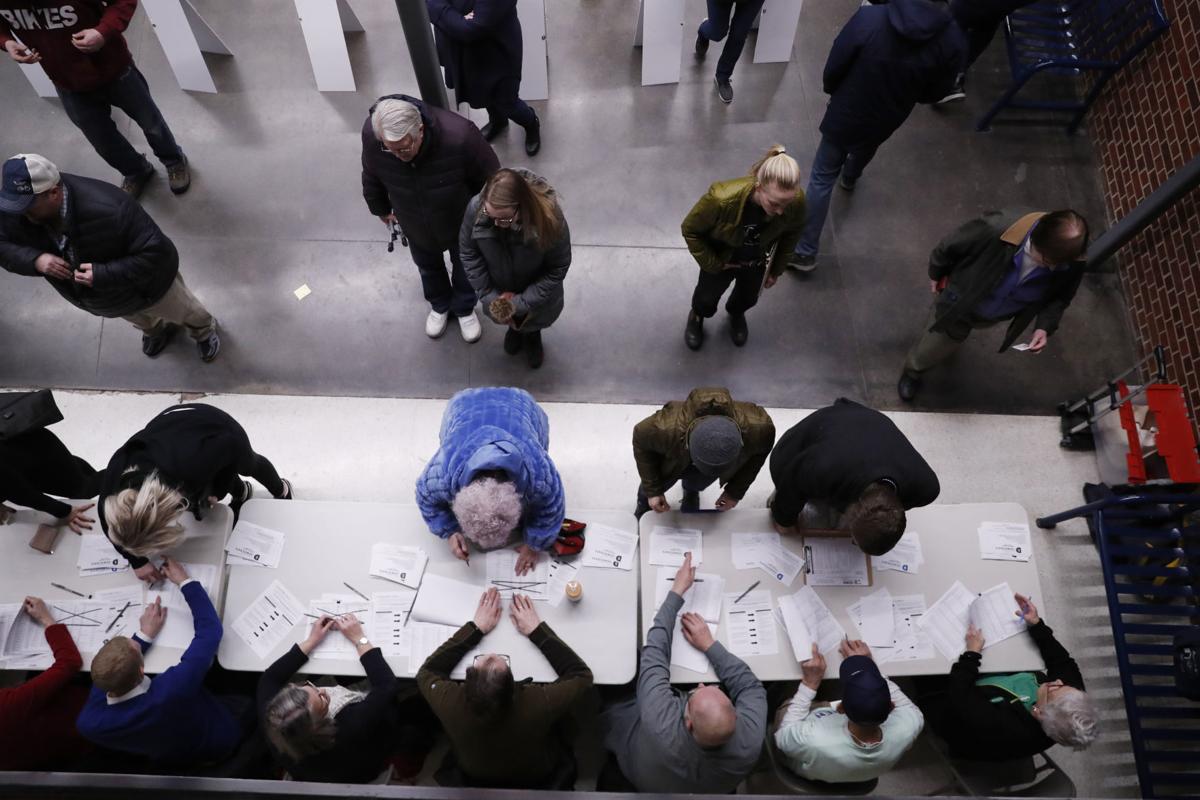 Caucusgoers check in at a caucus at Roosevelt Hight School on Monday in Des Moines, Iowa. The Wyoming Democratic Party says it's confident the state — one of the few others that will also hold a caucus in 2020 — won't deal with the same problems Iowa did.

As chaos reigns in the Iowa caucuses this week, the Wyoming Democratic Party wants to be perfectly clear: A similar debacle will not be happening on its turf.

Following the systemic failure of the Iowa Democratic Party’s new app-based method to canvass delegates in the first presidential caucus of the year (and the subsequent call from Democratic National Committee Chairman Tom Perez to recanvass the state after a nearly weeklong delay in reporting results), Democrats in the three other caucus states around the country — Nevada, North Dakota and Wyoming — have been examining their own processes to see what risks they may be open to.

However, Democratic Party officials in Wyoming, who will also be testing out a new means of tallying votes this year, say they do not share those concerns.

“We don’t have any concerns about the logistics of our caucus,” Nina Hebert, communications director for the Wyoming Democratic Party, said in an interview with the Star-Tribune on Wednesday. “We’ve gone through a secure ballot transmission system with a recognized and trusted vendor who is well-respected in the field, and we have built in three separate fail-safes in the event there is a failure with our software.”

“At this point, we are excited for our caucus and expect everything to run smoothly and have our results reported in a timely manner,” she added.

Depending on the state, parties decide their chosen candidates through either a caucus system — which political parties in some smaller states like Nevada, North Dakota and Wyoming use to commit delegates early on in contested elections — or a primary system, where party elections are typically administered by the state.

“It really is up to the parties under Wyoming law,” said Will Dinneen, a spokesman in the Wyoming Secretary of State’s office, which oversees elections. “There was some talk after the 2016 elections over whether we should switch to a primary system, but that’s really a decision that’s considered by the parties and the Legislature.”

Wyoming to take look at regulated gambling in 2020 legislative session

While primary elections are typically consistent in how they are carried out, party caucuses — where the political parties themselves run the show — can vary widely, not only in how they commit their delegates but how they tabulate the vote as well.

Iowa chose this year to introduce several unique elements into its process, including the release of three separate sets of results to more accurately track voter preference and the use of a smartphone application developed by a company called Shadow, which was intended to streamline the reporting of those results. However, the application ran into issues in collecting the data on Monday night, disrupting the reporting of results on all levels and delaying the assigning of delegates.

Barrasso calls impeachment a 'stunt;' Enzi says it was conducted in 'haphazard manner'

Wyoming, however, will do things differently, allocating delegates for the first time with a ranked-choice system that allows voters to list up to five candidates. The system will be administered in cooperation with the state and county parties at reporting stations all across the state. To tabulate those results, which will be filled out manually, the Democrats’ State Central Committee will be using scanning software by a firm called ClearBallot, which has been used to administrate elections in numerous, high-profile jurisdictions throughout the country.

To offer additional redundancy in the process, the scanned ballots will also be available for Democrats to verify that those counts were correct with the hard copies retained by the county parties in the “unlikely event” a hand recount is necessary, Hebert said.

“This software has been tested in multiple actual elections in multiple states and municipalities,” Hebert said. “We’re not going to run into an issue where we realize that, ‘Hey, this hasn’t actually been beta tested.’”

While the secretary of state’s office can help to facilitate that process — providing voter information to the parties, for example — the office’s role is largely a supporting one, Dinneen said, adding they’re there to help spread awareness of how the process works for both parties.

What about the Republicans?

While similar issues were absent with the Iowa Republican Party in its caucus, where incumbent President Donald Trump faced minimal competition, county officials within the Wyoming Republican Party have already spent the past several weeks educating its members on its own caucus — a low-tech and multi-leveled intraparty affair that takes place at the state party’s annual convention.

The process of nominating individuals to the convention takes place in a series of meetings at both the precinct and county levels over the course of several months, where everything from resolutions to representatives to the state convention will be discussed and debated.

The former director of a Wyoming progressive group is eyeing the seat of longtime Rep. Cathy Connolly.

WILSON – As the architect of the party’s “blue wave” election in 2018, Democratic National Committee chairman Tom Perez has quickly risen to p…

Wyoming Democratic official calls for senator's resignation after she is accused of comparing homosexuality to bestiality, pedophilia

Several weeks ago, reporter Nick Reynolds wrote a column asking for your help in deciding what issues are the most important ones to cover in the 2020 legislative session. Here are your top concerns.

Precinct 68 Iowa Caucus voters seated in the Biden section hold up their first votes as they are counted Monday at the Knapp Center on the Drake University campus in Des Moines, Iowa. The Wyoming Democratic Party says it's confident the state — one of the few others that will also hold a caucus in 2020 — won't deal with the same problems Iowa did.

Caucusgoers check in at a caucus at Roosevelt Hight School on Monday in Des Moines, Iowa. The Wyoming Democratic Party says it's confident the state — one of the few others that will also hold a caucus in 2020 — won't deal with the same problems Iowa did.