The candidates hoping to unseat Gov. Mark Gordon have their work cut out for them.

A Morning Consult poll released Tuesday showed Gordon tied with his counterpart in Vermont as the nation’s most popular governor. The same poll showed Gordon with a minuscule 17% disapproval rating, the lowest in the nation.

On Wednesday, two candidates hoping to unseat Gordon tried to convince a crowd at Washington Park that a governor with a 74% approval rating needs to be replaced. Gordon, meanwhile, made his case for why voters should keep him in Cheyenne for another four years.

“Well, I’d hope I’m accessible and responsive to the people of Wyoming,” Gordon said afterward, when asked about the poll. “I mean that’s very nice to be ranked that way but, you know, I’m just going to keep working as hard as I can to make sure that we keep moving this state forward. It’s nice to hear that, but that’s not what I’m resting on.”

Gordon was joined at the Politics in the Park forum by Republican challengers Rex Rammell and Brent Bien. Candidate James Scott Quick was unable to make the forum for reasons unannounced.

Neither Rammell nor Bien seemed deterred by the popularity of the man they are hoping to defeat.

“I guarantee he doesn’t have enough support,” Rammell said when asked about the poll results. “I find very little support for Mark Gordon, and I’ve been all over the state. I’ll bet you, I could count on both hands, a number of people that have stood up for Mark.”

For his part, Bien said if he was elected he would be able to maintain the highest gubernatorial approval rating in the nation.

“Wyoming will lead. We will lead hands down,” Bien said. “My No. 1 goal is to make this the freest state in the nation ... it’s taking more of a stand on certain issues. We are one, all 580,000 of us, man. We are Wyoming and we should be No. 1 and we should be leading this nation in so many things. And we can, you know, we can.”

Those attending the forum were invited to write and submit questions for candidates to discuss on stage. Issues included addressing the ownership of federal land, combating veterans’ suicide and diversifying Wyoming’s economy.

“This was the most popular question submitted by far, about 30 to 40% of all questions had a variation of this one,” the moderator for the event said. “To try to cover all of the variations ... I’m gonna phrase this question, if another health care crisis or pandemic occurs in the future, how would you manage this?”

All candidates on stage expressed disapproval of “shutting down” the state, or implementing strict mandates.

“When I got a call from [Trump Chief of Staff] Mark Meadows, that said, you, Wyoming, need to issue a stay at home order. I told him, ‘nuts,’” Gordon said. “And there were only about five of us governors who said that ... we’re gonna open up. We’re gonna go. And that is why your school kids had more days in person in the classroom than any other state in the country. We stood to make sure that we have those freedoms ... we’ll never do what we did again.”

Afterwards, Rammell took the front of the stage. With a background in veterinary sciences, he said he’d be sure to explain the risks and the medical side of the issue to citizens.

He then turned to address Gordon.

“I would never, never shut the government down, and I don’t think a governor has the authority to do it,” Rammell said. “You were wrong, Mark, and you’re blaming it on everybody else. You need to take responsibility for your actions.”

Gordon began to respond before being cut off by the moderator, warning candidates not to address each other and to keep the forum civil.

The candidates also addressed rising property taxes in the state. A majority of the views corresponded with each other, but plans to solve the problem differed.

“Can I just see a raise of hands,” Bien asked the crowd. “Did anybody’s property taxes go down this year?”

Those in the audience laughed.

“It’s something that needs to be addressed yesterday,” Bien continued. “This is all part of the big budget thing that we’ve got to do, because all this ties together to a better and more responsible way of budgeting in Cheyenne, because we know that property tax is just one means of getting revenue in.”

“I’ve asked our Legislature to make sure that they step forward and do what we tried to do about eight years ago,” Gordon said in his response time. “When we need to have a different class of property owner in Wyoming statute because we may not be able to amend our constitution to require the way it’s appraised. But we can make sure that we have a legislative solution that will lower that property tax rate for those people who need it.”

Rammell had a different approach to the issue.

“I think we can eliminate it. I really do,” Rammell said, when it was his turn to address the question. “This is a very wealthy state, extremely wealthy, maybe the most wealthy state in the union. I literally believe there are trillions of dollars of assets in this state. Why don’t we take the taxes off those and eliminate the property tax? We could do it. We would run this state on sales tax and that would be the only tax, no income tax, all these other taxes gone.”

The dollars Rammell referenced throughout the debate correlated with the state’s income from natural resources. The taxes paid by coal, oil and natural gas companies have helped Wyoming keep other individual taxes low. Because the state exports more than 90% of the energy it produces, however, it’s subject to market forces beyond its control.

As utilities move away from coal-fired power generation amid concerns about climate change and falling costs of other electricity sources, Wyoming’s revenue from coal has plummeted. Oil and gas companies, meanwhile, say current prices are enticing, but Biden administration policies have left them unsure about the future of drilling on Wyoming’s high proportion of federal land.

The Republican gubernatorial candidates will again take the stage for the Wyoming PBS debate at 7 p.m. on July 28.

“We’ve been incredibly busy. I worry every day about how we’re doing, but, but I have a job to do, and that comes first,” Gordon added. “I’m constantly trying to fit campaign events into my more normal course of work. And that’s up to the people, but I would hope they would wait for me because of what I’ve been able to accomplish.”

The primary election date is Aug. 16. Instructions to register to vote within Wyoming can be found at https://sos.wyo.gov/elections/state/registeringtovote.aspx.

In a race viewed largely as a referendum on Cheney, she is trailing her Trump-backed challenger badly, a new poll shows.

It's election day in Wyoming: Here's what you need to know

Eyes around the state — and around the nation — will be watching the race for Wyoming's lone U.S. House seat.

Republican secretary of state candidate Chuck Gray said Monday the $300,000 he loaned a previous campaign came from his own funds that were legally given to him after the death of his grandfather.

Exactly who dominates and what defines the Wyoming GOP is in flux, but there’s a wing of the political right, who fashion themselves as the “true conservatives.”

Republican voters in House District 51 will choose between a moderate-leaning incumbent and a farther-right challenger, echoing a pattern seen in races across Wyoming.

Lummis and Barrasso said the American people deserve more information about the search of Trump's estate.

Entering the final stretch of her primary campaign, Cheney hasn't backed down. She released a video on Thursday with a closing message reinforcing her criticism of Trump.

This adorable red panda at a U.K. zoo is a 'miracle'

This adorable red panda at a U.K. zoo is a 'miracle' 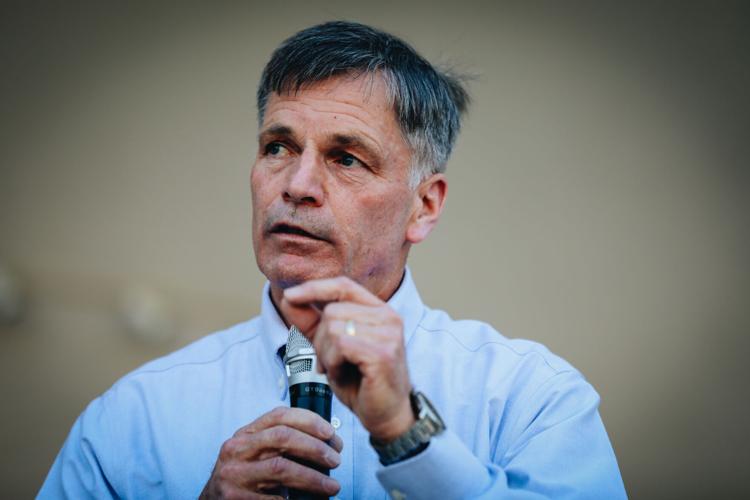 Gov. Mark Gordon speaks to the crowd at Politics in the Park on Wednesday at Washington Park in Casper. A poll recently showed that Gordon is tied for the nation's most popular governor. 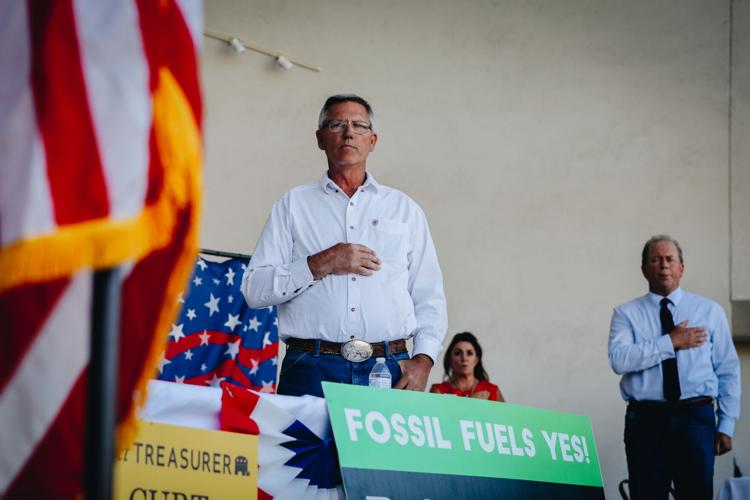 Gubernatorial candidates Rex Rammell, left, and Brent Bien stand for the pledge of allegiance during Politics in the Park on Wednesday in Washington Park in Casper. Both are seeking to unseat Gov. Mark Gordon. 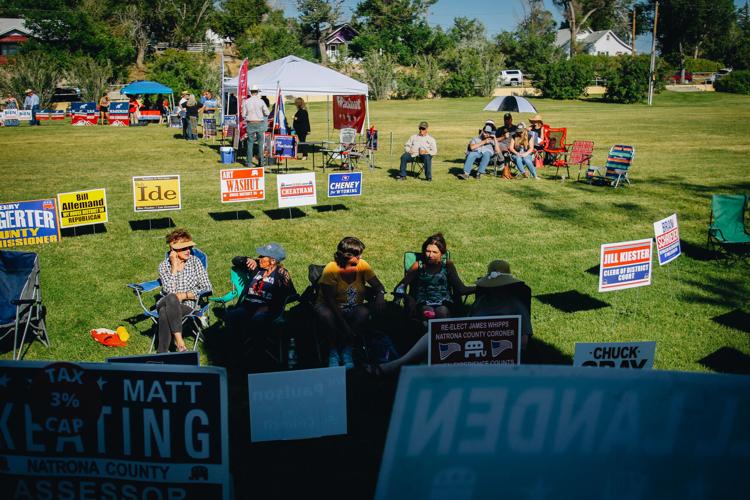 Attendees are surrounded by candidate yard signs at Politics in the Park on Wednesday at Washington Park in Casper.