As Wyoming nears a bid on Occidental-owned land, watchdogs still have questions
View Comments
Share this
Return to homepage × 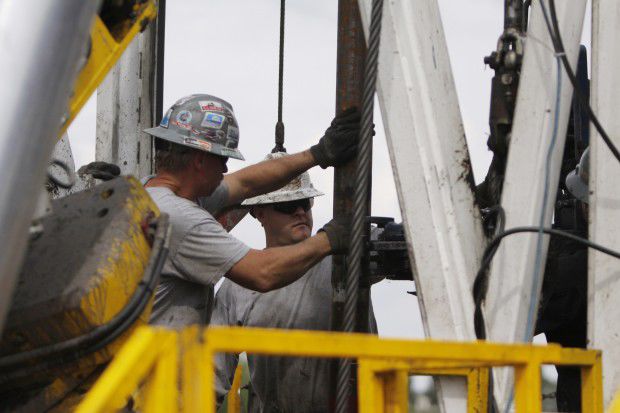 Crew members with Anadarko Petroleum Corp. work on a drilling platform in 2009 on a Weld County farm near Mead, Colo. The state of Wyoming is considering purchasing land in southern Wyoming, Colorado and Utah that once belonged to the company. 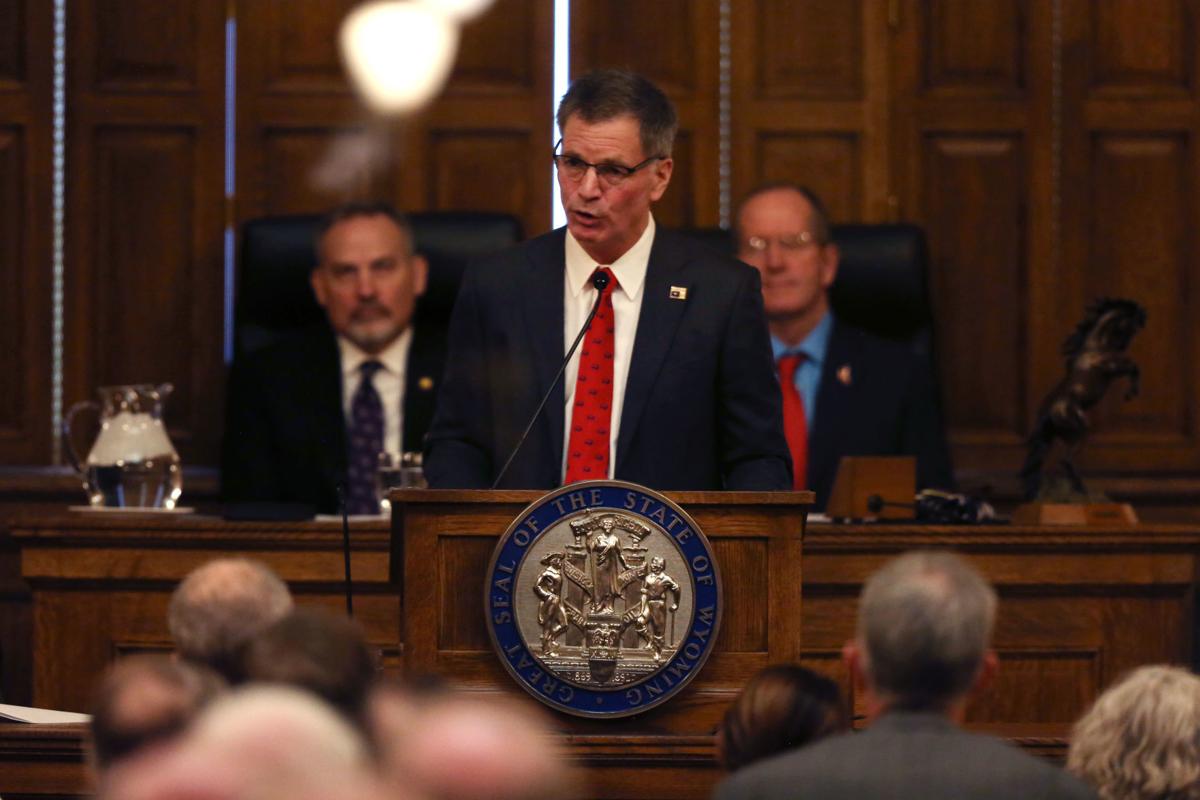 Gov. Mark Gordon gives his State of the State address before a joint session of the Wyoming Legislature on Feb. 10 at the Wyoming Capitol in Cheyenne.

Gov. Mark Gordon’s office says it could submit its first formal bid for 5 million acres of Occidental Petroleum-owned land in southern Wyoming next week in what would be the first official step in closing one of the largest public land purchases in American history.

Wednesday was the initial deadline for the state to bid on the property — which includes one million acres of “checkerboard” surface lands as well as 4 million acres of mineral rights. The State Loan and Investment Board would have needed to convene publicly to approve an initial, non-binding bid for the land.

After some complications, however, that date has been extended by one week after the state was unable to issue a public notice of the bid in time to meet the initial deadline.

“The state has been granted an extension to bid until July 8,” Michael Pearlman, a spokesperson for the governor, wrote in an email. “This is a new process for a public entity to be involved in and we are grateful to Occidental for recognizing the public requirements that allow the state to consider this opportunity.”

The State Loan and Investment Board, which is made up of the state’s top five elected officials (governor, treasurer, auditor, secretary of state and superintendent of public instruction), is charged with making investment decisions on behalf of Wyoming taxpayers and has been the group leading the state’s foray into a potential purchase of the Occidental-owned land in an effort to bolster the state’s finances.

The potential deal was first made public this winter and was pitched by Gordon as a way to “invest in ourselves” and reduce the state’s dependency on more volatile forms of revenue in the state’s investment portfolio. However, the expected cost of the land deal — estimated to be upward of $1 billion — has given pause to many, particularly as the state faces unprecedented declines in revenue over the next several years.

Others have reservations about the lack of transparency in the deal which, because of the involvement of a private company, is not subject to the same public meetings regulations as other investments made by the state.

After the governor vetoed a bill that would have given the Wyoming Legislature oversight authority over the deal, the executive branch has regularly met in closed-door meetings in an effort to evaluate the purchase and determine whether it is a prudent investment for the state. Next week, likely Monday, will be the first time the group will meet publicly to discuss the sale and, potentially, vote on what might be the largest public land sale since the Alaska Purchase in the 19th century.

To date, all of this has been done without extensive input from the Legislature at a time when the state finds itself in dire fiscal straits.

“There is a separation of power and the legislature does not operate the state’s investment portfolio,” Pearlman wrote in an email. “The Governor has been providing legislative leadership with regular updates.”

The announcement comes on the heels of numerous concerns by lawmakers and transparency advocates who have criticized the deal, which is being carried out by the executive branch under a process requiring no legislative oversight. To date, little public mention of the deal has been made, with most conversations on the deal taking place in executive session of the investment board.

While Gordon said in an interview Tuesday that he has kept legislative leadership apprised of new developments in the deal, rank and file members suspicious of the deal, like Rep. Chuck Gray, R-Casper, say they have received insufficient information around the purchase — a particular concern as the state faces down a more than $1.5 billion decline in revenues over the coming biennium.

Of concern has been the recent public disclosure of an April contract between the state of Wyoming and Barclays Bank for consulting services on the deal that would guarantee the investment bank a fee of up to $2.5 million in public money, with up to $8 million more guaranteed if the state pays at least $1.5 billion for the land.

“It is absolutely wrong for this exorbitant contract to be carried out,” Gray wrote in an emailed statement to the Star-Tribune. “This is a time of economic and budgetary challenges in our state. It is wrong for politicians to use taxpayer funds for this insider consultant contract. Taxpayer funds should be used for the people of Wyoming, not for insiders.”

The Powder River Basin Resource Council, which initially acquired a copy of the contract, has raised concerns that the deal is structured in a way that rewards the bank based on how much money the state decides to pay. Jill Morrison, the executive director of the Powder River Basin Resource Council, said in an interview that this is of particular concern given Barclays Bank’s long-established history of loaning bonds to Occidental over the years, which she said presents a potential conflict.

“I’ve seen contracts like this, and this is not unique,” said former Commissioner of Natural Resources of Alaska Bob LeResche, a member of the group’s board and a former investment banker. “But as far as I’m personally concerned, it is totally inappropriate for a public entity to enter into such a contract. It’s problematic because Barclays’ compensation increases if they talk Wyoming into paying more for the asset. That’s something that, as a taxpayer, gives me great pause.”

A spokesperson for Gordon, who ultimately approved the contract in consultation with Attorney General Bridget Hill, said that the governor was aware of the relationship between Barclays and Occidental prior to signing off on the deal, writing in a statement that Barclays “was the best option for the state” to build an understanding of the revenue-generating potential of the land and that their proposal was “competitively priced.”

On top of all of these considerations is the sheer sum of money that could potentially be committed to the deal, particularly at a time the state is looking at unprecedented budgetary shortfalls from the impacts of COVID-19 and the continued underperformance of traditional sources like oil, gas and coal.

While the state would likely finance the deal using investment funds — which are constitutionally limited and would not be usable to offset the state’s budget shortfall — some are concerned about the potential opportunity cost in expending dollars, which have helped generate reliable investment income for the state, on oil- and trona-rich lands with unknown earning potential.

Gordon downplayed this characterization of the deal, saying that other factors in the financial markets have shifted in a way that could make the deal more lucrative to the state. While Occidental has been struggling with the downturn in oil prices, interest rates on fixed income assets within Wyoming’s current investment portfolio — like bonds — have fallen nearly to zero, while other stocks with higher earning potential still maintain some degree of volatility.

While some have characterized the purchase of the land using investment dollars as an opportunity cost that could potentially backfire, Gordon said that the land, once thoroughly evaluated for its maintenance costs and earning potential, could help reduce volatility within the state’s investment portfolio.

“In this case because of what’s going on in the world, fixed income investments — unless you’re getting very risky, you know into junk bonds and that kind of thing — doesn’t really return that well,” Gordon said. “So what we’re trying to figure out is, you know, if this investment makes sense at a price that will return more than what the portfolio returns now, and that the assets that are associated with it are at least as dependable as what we have already in the portfolio.”

Then there are the intangible considerations. Wally Johnson, a Sweetwater County Commissioner whose county has long relied on payments from large swaths of Occidental-owned land there, said that he continues to support the deal, particularly after meeting with Gordon two weeks ago.

“I think it’s in the best interest of the state of Wyoming to own that land,” Johnson said. “I believe that if it’s in the hands of somebody like Occidental or Chevron or whoever it is, we as a commission have very little input or control what they might want to do with that.

“But as I told the governor, I would rather deal with the state of Wyoming than I would with any private company. I do realize there is some loss of revenue we might experience — and I don’t know the details of the deal — but on the surface, I think this is a potentially good deal and I think the governor and the state of Wyoming should pursue it.”

The governor is using a process that won’t require legislative approval on the bid for 5 million acres of land and mineral rights.

Edmonds: A revenue source, if we can handle it

The primary focus of the Wyoming Legislature’s biennial budget session is of course, the budget. This year was notable in the sheer variety an…

The editorial board says our leaders deserve credit for creative thinking. But they must be thoughtful and transparent as they explore a massive land purchase.

The state of Wyoming is pursuing a massive land purchase. What exactly is at stake?

CHEYENNE — As it turns out, purchasing 5 million acres is not as easy as simply signing a check.

The governor says the state has a once-in-a-lifetime opportunity to buy 1 million acres of land as a strategic investment.

307 Politics: What an unusual straw poll says about Wyoming politics, and other news

The surprising results have some questioning the decision to hold and publicize the poll, which favored Bryan Miller over Cynthia Lummis.

If Wyoming plans to double down on minerals to save its future, then trona – one of the Equality State’s most critical natural resources – is …

Wyoming's bid to purchase 5 million combined acres of land on Wyoming's southern tier has been put on hold after its owner, Occidental Petroleum, announced it would be moving forward with another bidder.

Crew members with Anadarko Petroleum Corp. work on a drilling platform in 2009 on a Weld County farm near Mead, Colo. The state of Wyoming is considering purchasing land in southern Wyoming, Colorado and Utah that once belonged to the company.

Gov. Mark Gordon gives his State of the State address before a joint session of the Wyoming Legislature on Feb. 10 at the Wyoming Capitol in Cheyenne.