Facing aggressive Biden agenda, nation’s most gun-friendly state looks to get even friendlier
View Comments
Share this
{{featured_button_text}}
1 of 2 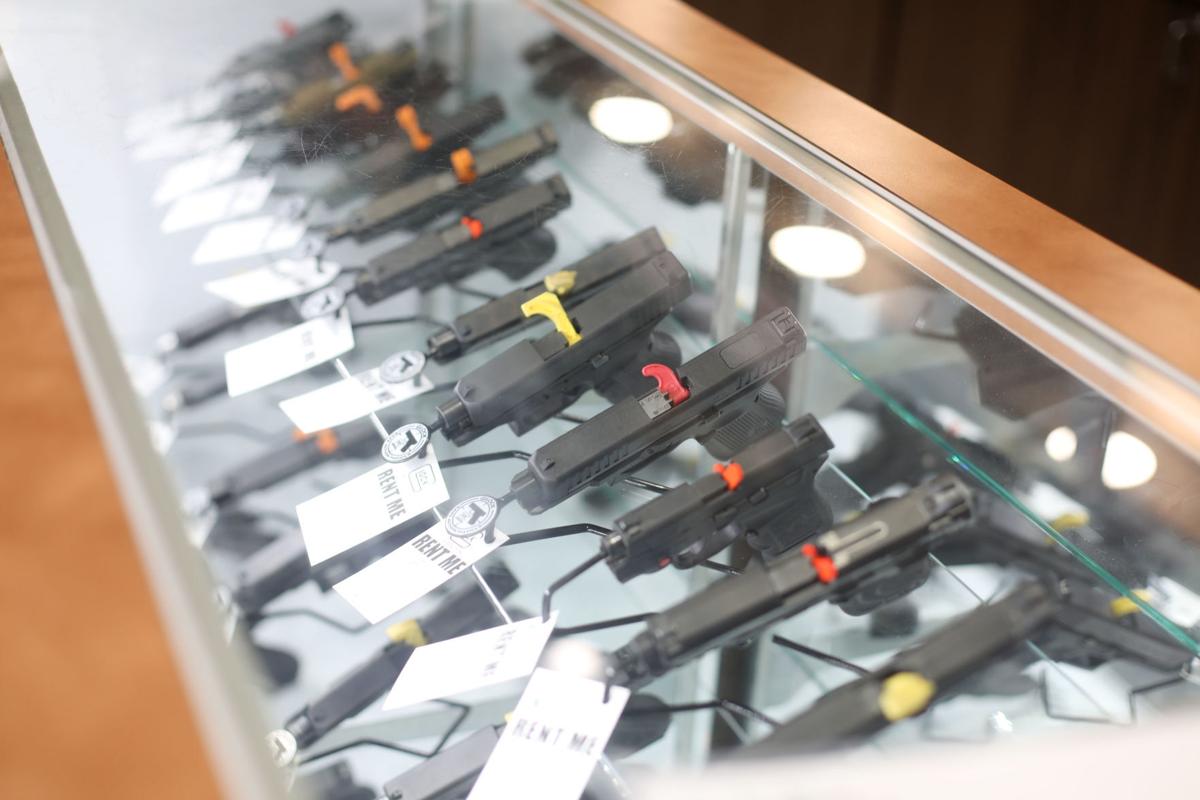 Rows of handguns sit in the display case at Wyoming Gun Company in Casper on March 26. Wyoming lawmakers will back several pro-Second Amendment bills at the upcoming legislative session. 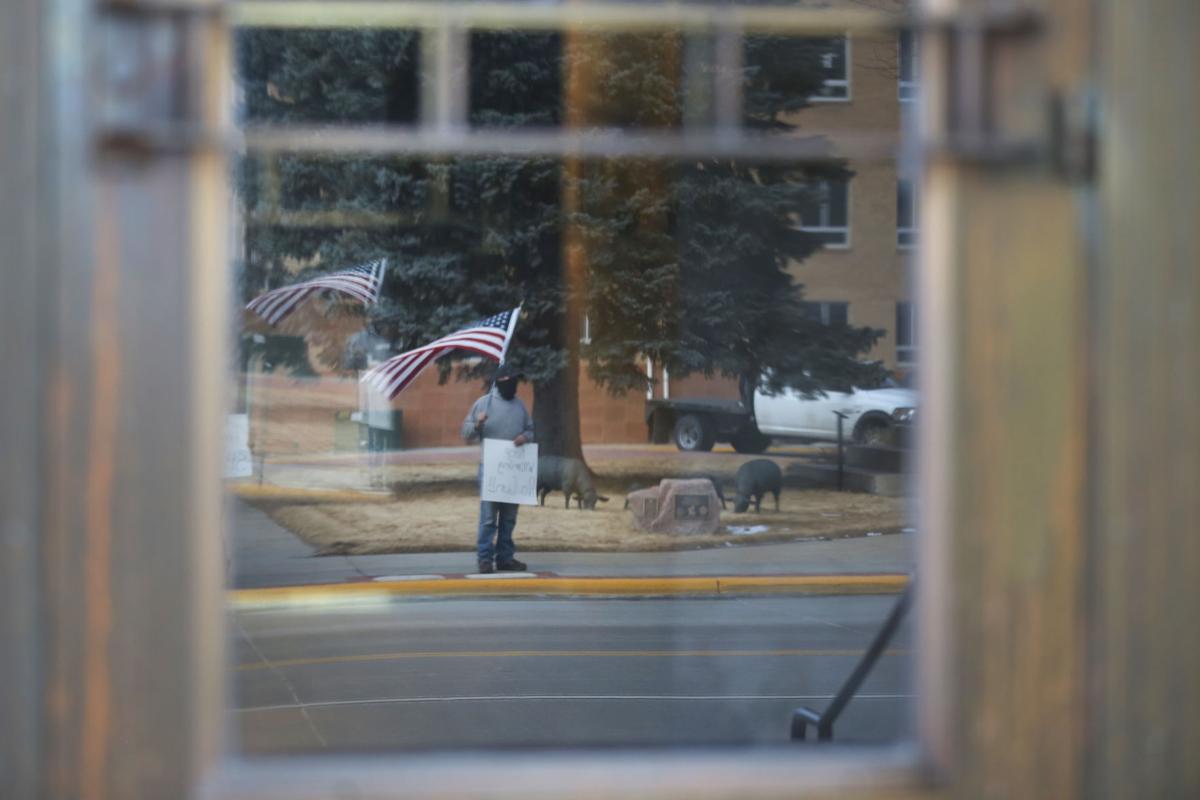 Khyler Cunliffe is reflected in the doors to the Natrona County Courthouse holding an American flag and a sign that reads "Keep Wyoming Pro Gun" in the second day of pro-Trump protests in Casper on Jan. 7.

In a nation largely enamored with guns and people’s right to own them, few states can compare to Wyoming and its commitment to the Second Amendment.

Depending on who you ask, Wyoming’s gun control statutes also have the distinction of being among the strongest or the weakest in the nation, simultaneously ranked as the 48th weakest gun control state by pro-gun control advocacy group the Giffords Law Center and among the nation’s best states for gun owners, as judged by numerous trade publications.

Wyoming also has the distinction of holding the highest rate of per capita gun ownership in a country with more firearms in circulation than the next 24 highest gun-owning nations in the world combined, according to the most recent edition of the international Small Arms Survey. Even Democrats in Wyoming own guns and, in the last two legislative sessions, some of their membership would occasionally caucus at a local shooting range during lunch breaks to talk policy and strategy, their conversations punctuated by a shotgun’s blast.

In the last several legislative sessions, however, Wyoming has been reluctant to take the additional steps needed to become the most pro-Second Amendment state. While numerous pieces of gun legislation — including a controversial “stand your ground” law — have passed in the years since, then-Gov. Matt Mead in 2017 vetoed legislation that would have allowed the concealed carry of firearms on government property, while the Legislature has been reluctant to support other legislation to repeal gun-free zones and transform Wyoming into a Second Amendment “sanctuary state.”

Of course, that was all before President Joe Biden — a Democrat — was elected on one of the strongest gun control platforms to be pursued by a candidate for the nation’s highest office, backing policies that include national bans on high capacity magazines, limits on firearm sales and provisions to hold firearms manufacturers civilly liable for products used in crimes.

But Biden’s positions on what type of weapon a person can own — which remain widely unpopular with the public and gun owners, according to an extensive study by the Rockefeller Institute of Government earlier this year — prompted a swift response, even before Biden’s Jan. 20 inauguration.

Last year, gun sales nationwide skyrocketed and they remain well above pre-2020 averages, while Republican-led state legislatures — including Wyoming — have given renewed attention to steeling themselves against federal gun control laws.

That enthusiasm appears to be crossing over into the Statehouse. This session, lawmakers will take up numerous pieces of Second Amendment legislation, including bills by freshman Rep. Robert Wharff, R-Evanston, to repeal gun-free zones and eliminate residency requirements for concealed carry permits. Longtime Second Amendment activist Sen. Anthony Bouchard, R-Cheyenne, will be taking another swing at implementing a preemption bill called the “Second Amendment Preservation Act,” a version of which narrowly failed passage last year due to numerous concerns over its constitutionality.

The political pressure is likely higher this year as well. The 2020 campaign season saw numerous Republican incumbents felled in their primaries from attacks from the “no compromise” dark money gun rights group Wyoming Gun Owners for their support of a bill colloquially called “Fix NICS,” which was pushed for by some firearms retailers to improve issues with the National Instant Criminal Background Check System.

Another target of Wyoming Gun Owners, Sen. Ogden Driskill, R-Devils Tower, has stepped up from being a co-sponsor of a gun-free zone repeal bill in 2019 to its chief sponsor in the Senate this session, though it is unclear whether it had anything to do with the organization’s involvement in last year’s elections. (Driskill did not respond to two emailed requests and a voicemail seeking comment.)

“Nobody I’ve ever spoken to in WYGO’s membership supports gun control,” Aaron Dorr, the Iowa-based policy adviser for Wyoming Gun Owners, said on the conservative podcast Cowboy State Politics earlier this month. “On the contrary, they’re getting sick and tired of seeing moderate Republicans who claim to be pro-gun attack them and attack their freedoms during session. And at election time, our members are ferocious and definitely hold these people accountable. And we’ve had a very, very successful run of doing that over the last several cycles now.”

Others in Wyoming, however, see the heated rhetoric surrounding firearms policy as misguided, forcing lawmakers into passing potentially unconstitutional legislation like the Second Amendment Preservation Act, which groups like Everytown for Gun Safety — which has opposed the bill in the past — say could do more harm to the state than good.

“We’ve seen this happen before in Wyoming,” said Linda Burt, a gun owner and the group’s Wyoming director. “They pass unconstitutional laws and they end up in court and there’s a court fight, which costs Wyoming money and time. And they lose. That’s exactly what’s going to happen with this bill.”

“What we want to promote is responsible gun ownership and smart gun policy,” she added. “People can still have their gun rights and still support smart policies.”

Now in a minority position, how will Wyoming's delegation respond to Biden's aggressive climate plans?

The sway Wyoming enjoyed in Washington under Trump has dwindled. But the state’s congressional delegation plans to fight back.

Rows of handguns sit in the display case at Wyoming Gun Company in Casper on March 26. Wyoming lawmakers will back several pro-Second Amendment bills at the upcoming legislative session.

Khyler Cunliffe is reflected in the doors to the Natrona County Courthouse holding an American flag and a sign that reads "Keep Wyoming Pro Gun" in the second day of pro-Trump protests in Casper on Jan. 7.