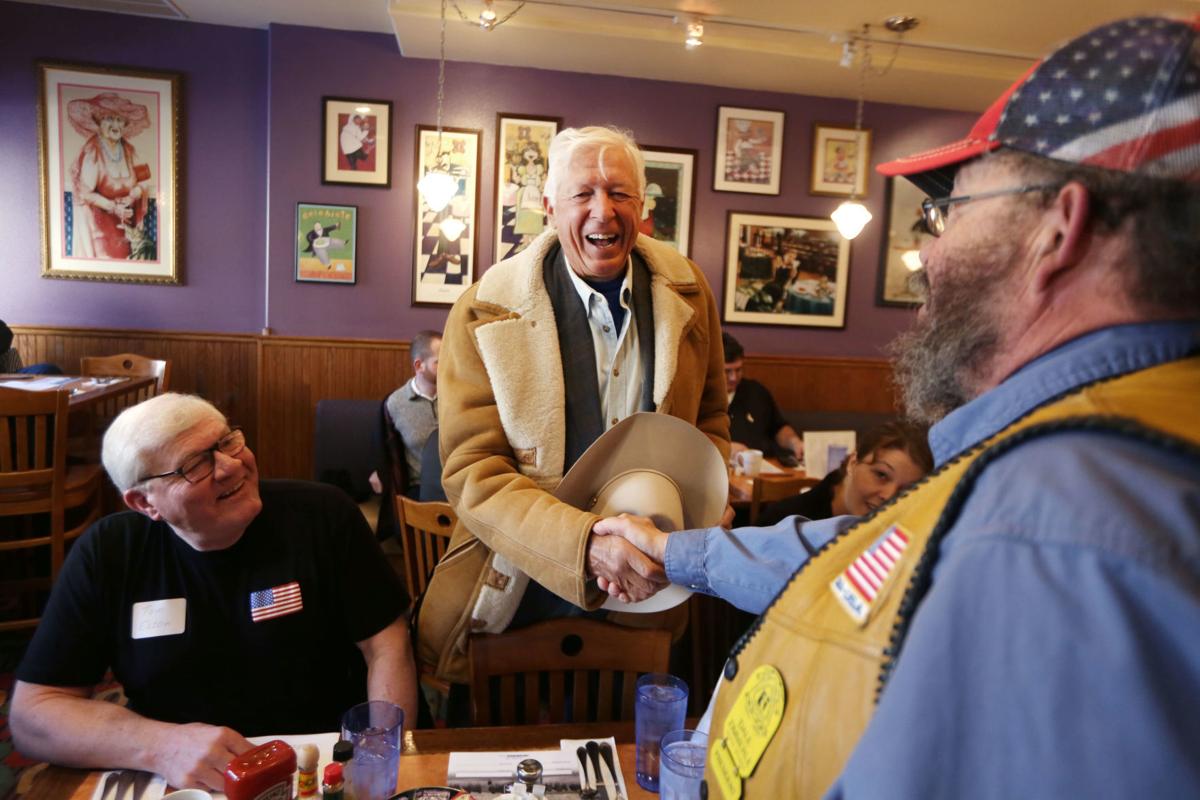 Foster Friess arrives at Eggington's on Friday in Casper, where he greets supporters and shakes the hand of Dale Zimmerle, right, as part of his "listening tour." Friess, who is considering a Senate run, answered questions from community members in attendance. 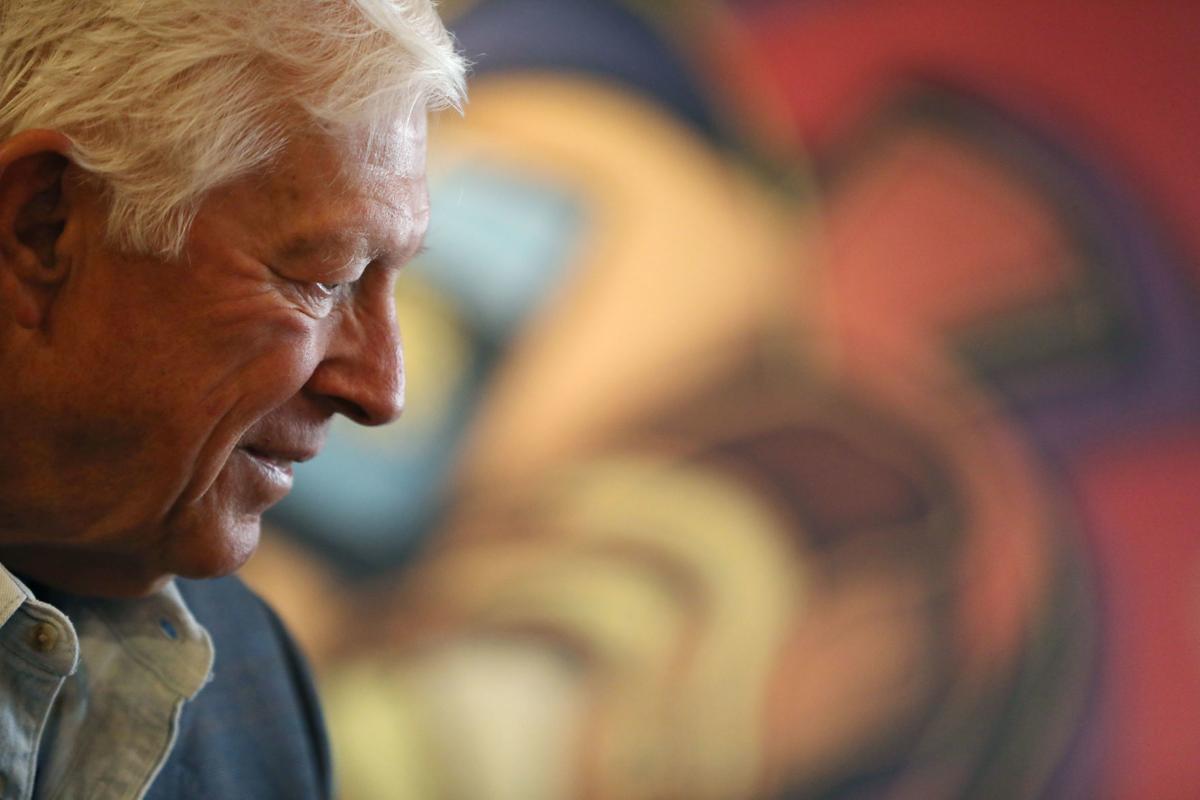 Businessman Foster Friess holds an event at Eggington's in downtown Casper where he spoke with members of the community about issues facing Wyoming Friday. 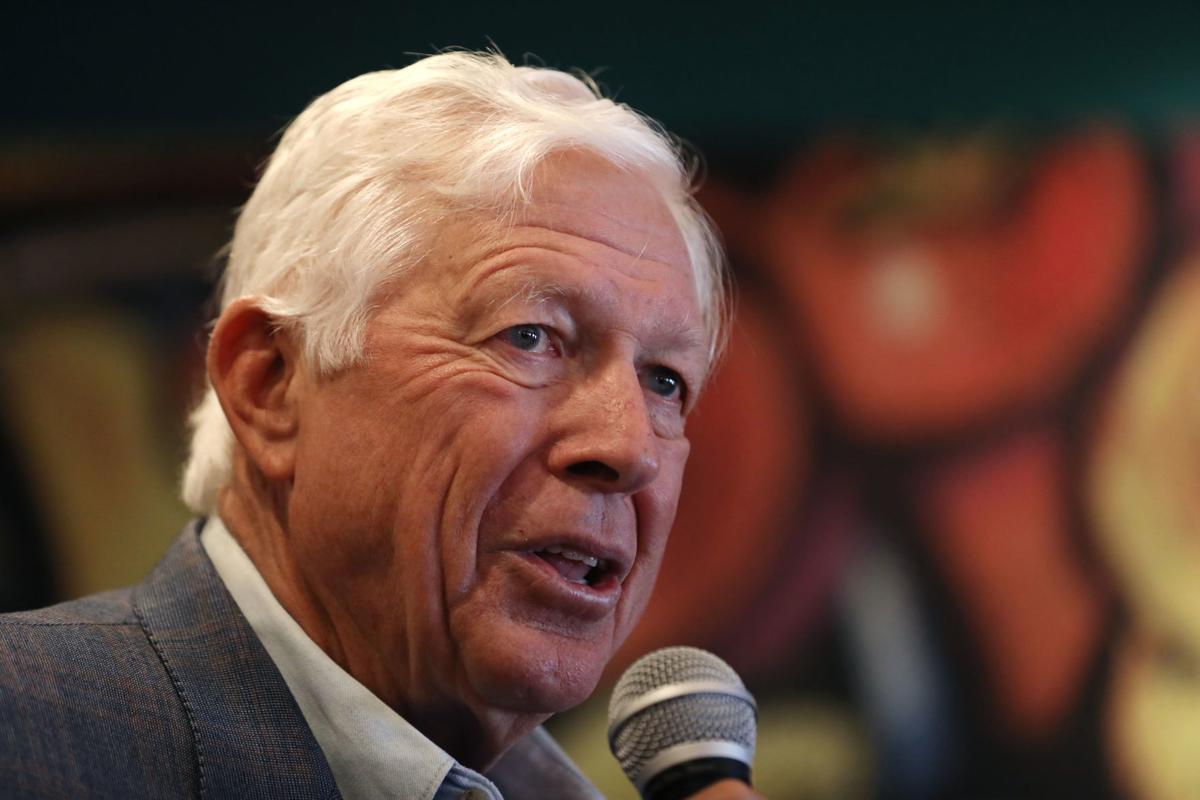 Foster Friess speaks to members of the community during an event he held at Eggington's in downtown Casper Friday. 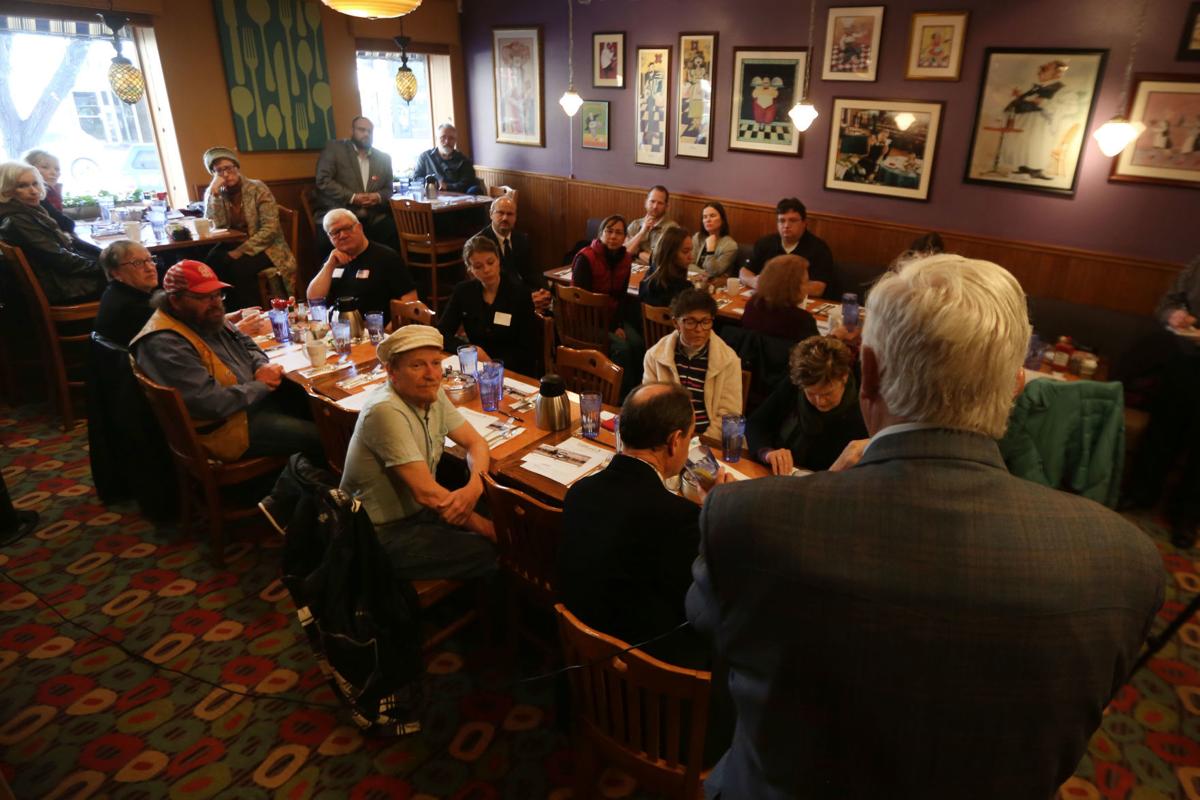 Foster Friess is getting closer to an answer.

The Wyoming multimillionaire and GOP megadonor has been considering a run for U.S. Senate for months, and now he’s putting the question directly to his supporters on a cross-state listening tour that brought him to Casper on Friday morning.

Friess’ question is simple: Should he run for U.S. Senate or should he use his money and influence to further private endeavors?

Friess ran for governor in 2018 and was unsuccessful but came in second in the state’s Republican primary for the top office. If Friess were to run for Senate in a bid to fill the seat Sen. Mike Enzi will vacate upon his retirement, he would face former Rep. Cynthia Lummis, as well as a handful of other hopefuls who have already announced their candidacy.

When Friess announced the listening tour in January, he issued a statement saying he wanted to know what Wyoming voters thought first.

“I’ll be asking Wyoming voters what they are looking for in their next Senator. Do they want a businessman and political outsider willing to disrupt the status quo in Washington?” the statement reads.

So Friday morning, Friess gathered a handful of supporters into the back corner of Eggington’s and asked what was on their mind.

Flirting with a Senate run, Foster Friess to kick off 'listening tour' of Wyoming

In answering questions from his audience, Friess invoked everything from “the evil of socialism” to privatizing medicine and education to Wyoming’s energy future to the U.S. military’s role in global affairs.

Friess’ first question came from a small business owner who worries about the mounting costs of health care and health insurance.

In response, Friess touted a measure he’s championed, announced by the White House in November, that would force hospitals and medical providers to list their prices, in cash, online and at the point of sale.

Wyoming Rep. Liz Cheney will not run for Senate

Friess said he knows the issue is larger than one policy measure, but his hope is to approach the problem incrementally.

“Let’s take one bite at a time and not eat the buffalo all at once,” he said.

Friess also propped up Christian health care sharing ministries as a potential solution to the devastating cost of healthcare. Those ministries are not technically insurance programs but rather split the cost of medical services among the members. Groups like Samaritan Ministries and Medi-Share fall into this category.

Friess adamantly opposed the idea of “socialized” anything and said the issue would be better addressed through private means.

In keeping with his desire to privatize everything, and in railing against “socialism,” Friess pointed to public schools as the reason so many young people are moved by proposals like “Medicare for All” and federal student loan forgiveness. He said the school systems distort facts and teach students through a liberal bent.

Friess also fielded questions about Wyoming’s energy future, saying coal’s future would depend on developing the market overseas. He also said nuclear power could be “an additional ingredient to our economy in Wyoming.”

On climate change, Friess invoked the Ice Age and natural disasters recorded in the Bible as evidence of the cyclical nature of shifting global temperatures.

“People should know that all through the generations we’ve had climate change,” he said, adding that those arguing for action on climate change “will do anything devious to distort the truth.”

The vast majority of scientists agree that human-caused climate change exists and is a pressing issue.

Higher education was another key topic during the breakfast. Friess warned against the dangers of student loans, saying that the loans were “worthless,” because the classes students use the loans for aren’t in fields they can get jobs in, he said.

However, federal student loans are not contingent on students taking particular credit hours.

When pushed on the rising costs of college, Friess propped up the trades as a more realistic alternative for kids who can’t afford a university degree.

He adamantly opposes student loan forgiveness because he said it was unfair to those who had already saved the money to pay their own way.

The final policy area Friess touched on was the United States’ role in armed conflict overseas. While Friess said “America should not be the world’s policeman,” he worried who would step in to fill that role if the U.S. did stop intervening in global conflict.

He said the U.S. should have a role in global affairs, but should be “more careful” about what that involvement looks like. He used the U.S.’ ability to provide arms to Kurdish fighters in Iraq as an example of an alternative way the U.S. could support foreign conflict.

With his listening tour nearly wrapped, Friess is expected to make a decision on the Senate run soon. Since losing the gubernatorial race in 2018, he’s remained an active pundit on Fox Business, and his conservative advocacy group, Foster’s Outriders, boasts considerable credentials in national conservative politics. In addition to bankrolling other conservative campaigns for office, Friess is a benefactor for influential groups like Turning Point USA and the conservative news site The Daily Caller.

If he were to run, he would likely see the backing of GOP heavy hitters. Trump endorsed his 2018 gubernatorial campaign.

Friess said he plans to make his decision in the next 10-14 days. If he decides not to run, he will continue supporting private causes, he said.

Foster Friess says he will not run for Enzi's U.S. Senate seat

Friess would have represented a formidable and well-financed challenger to former Rep. Cynthia Lummis.

The former Air Force officer and state GOP official is taking another stab at federal office.

Foster Friess arrives at Eggington's on Friday in Casper, where he greets supporters and shakes the hand of Dale Zimmerle, right, as part of his "listening tour." Friess, who is considering a Senate run, answered questions from community members in attendance.

Businessman Foster Friess holds an event at Eggington's in downtown Casper where he spoke with members of the community about issues facing Wyoming Friday.

Foster Friess speaks to members of the community during an event he held at Eggington's in downtown Casper Friday.