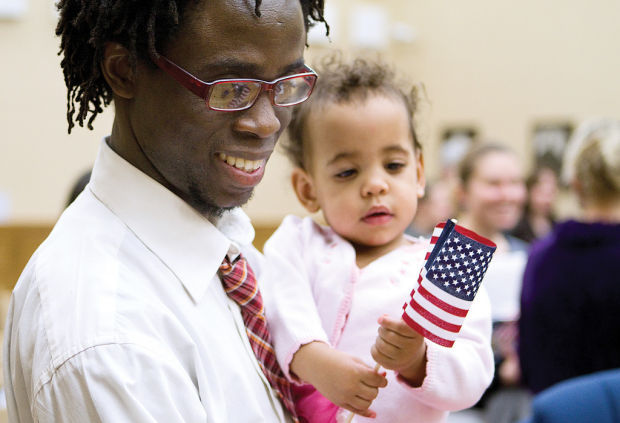 Bertine Bahige holds his daughter in February 2012 after participating in a naturalization ceremony to become a United States citizen at the Campbell County Courthouse in Gillette. Bahige, who was born in the Democratic Republic of the Congo, came to the U.S. as a refugee and has since settled in Gillette, where he teaches math and coaches soccer at Campbell County High School. Bahige has been working to help establish a refugee resettlement program for Wyoming, the only state without such a system in place. 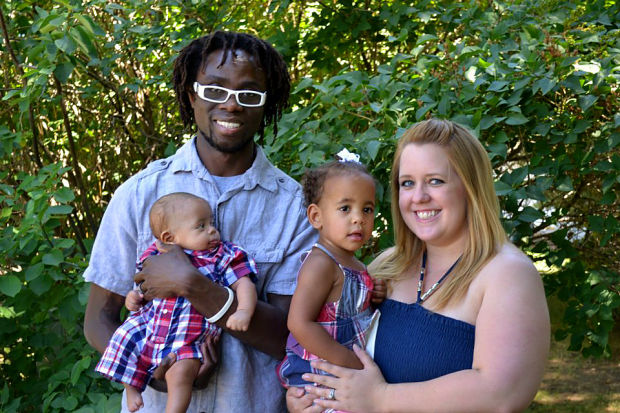 Bertine Bahige is pictured with his family in Gillette recently.

Bertine Bahige hid under his bed while gunshots echoed throughout his hometown of Bukavu in the Democratic Republic of Congo. The sound of his mother’s screams dimmed the pings of bullets when the rebel soldiers entered his home. He watched a rebel smack his mother unconscious with the butt of a gun.

Rebel groups fleeing Rwanda invaded the DRC in the years after the 1994 genocide. They were looking for child soldiers and shares of the country’s mineral wealth.

They kidnapped 13-year-old Bertine and one of his sisters in 1996. He hasn’t seen his mother or nine siblings since.

He was a child soldier for the next two years. Then he escaped to a refugee camp in Mozambique. Five years later, Bahige began an odyssey that brought him to America.

With the help of refugee resettlement initiatives coordinated by the United Nations, the federal government and nongovernmental organizations, Bahige was able to start a new life in a Maryland suburb outside Baltimore and Washington, D.C. He learned English, worked at Burger King and found a job as a teacher’s aide in a local school.

The University of Wyoming offered him a scholarship in 2006. He moved west and hasn’t looked back. Today, he’s a math teacher at Campbell County High School and married to a Gillette native.

Bahige would see glimpses of Western life on television as a young boy in Africa. He never let his imagination run too far with the fictional version of the American dream. But today, he’s deeply rooted in the middle class – a socioeconomic category unattainable for most in the DRC. Bahige owns a home, has two children and coaches soccer at the high school. Wyoming, he said, is an ideal place for a refugee to take roots.

Sprawling cities and congested suburbs are a far cry from life in Africa, he said. When he moved to Maryland, he felt detached.

“When you come from nothing, it’s not easy to find your way in a big community,” he said. “That’s the beauty of Wyoming: small and family oriented communities. If you fall, people will pick you up.”

The state, though, isn’t a landing pad for refugees who escaped torture, war, human trafficking and other horrors unseen in the United States.

Wyoming is the only state in the nation that doesn’t have a refugee resettlement program.

Bahige is hoping to change that.

He is Wyoming’s delegate for the United Nations Refugee Congress. Since 2010, he’s reached out to the Wyoming congressional delegation, state lawmakers and Gov. Matt Mead in hopes of creating a resettlement program in Wyoming.

Despite roadblocks, he’s pushed the ball in motion.

He’ working with the UW School of Law to draft a plan that Mead will consider for adoption.

No state dollars would fund a refugee resettlement program. The federal government would pump money into state agencies and a nongovernmental organization to oversee the initiative, said Suzan Pritchett, co-director at UW’s Center for International Human Rights Law Advocacy.

The state recently began its review of the federal guidelines for starting a refugee program, she said.

The governor’s office doesn’t have a timeline for when it will review the draft plan.

States like Colorado and Utah received more than 1,000 refugees in 2013. Wyoming would open its doors to a smaller number, Pritchett said.

The state’s low immigrant population may make it difficult for refugees who require certain places of worship and other cultural customs, she said.

“Wyoming is not an immigrant-heavy state,” she said. “It may be inappropriate for some types of immigrant populations to move here. We are thinking about what’s the best fit for Wyoming and the capacity it can handle. It won’t be on the 1,000 per-year end of the scale.”

Refugees who arrive in the U.S. aren’t arbitrarily picked. After the UN chooses candidates, the Department of Homeland Security vets their backgrounds. Then the State Department chooses what cities will be best for the candidates.

When the refugees arrive in cities, members of a nongovernmental organization pick them up at the airport, take them to an apartment stocked with donated goods and find them jobs, begin learning the language and enroll children in schools, said Jim Barclay, president and CEO of Lutheran Family Services Rocky Mountains, a nongovernmental organization that works with the federal government and state agencies to provide refugees with services in Colorado, New Mexico and Montana.

The goal of resettlement is not to enlist people on government welfare programs, Barclay said.

“It’s about self-sufficiency,” he said.

The refugees are enrolled in federal assistance programs like food stamps, but after eight months the federal government begins to wane support for most refugees. Within the first four months, refugees are required to have jobs. One stipulation is that the immigrants have to repay their plane tickets.

“I would expect in Wyoming there would be a higher percent because it would settle fewer and the economy is strong,” he said. “This is not a long-term benefit program. This is a short-term program helping people flee persecution and build new lives.”

Bahige received his U.S. citizenship in 2011 and is proud to call himself a Wyomingite. In the classroom he helps students with their pre-calculus. On the soccer field, he trains young athletes.

Wyoming lawmakers are proposing to spend $5 million to build walls on the southern borders of Texas and Arizona and to move people who are not citizens to sanctuary cities.

Wyoming's Rep. Harriet Hageman will serve on a congressional subcommittee tasked with investigating the "weaponization" of the federal government following Republicans' takeback of the House.

After unfruitful attempts, the ban on abortion drugs has found more support among a new crop of lawmakers.

The Freedom Caucus has focused on changing some of the ways in which Wyoming government works on a more fundamental level.

As well as changing the minimum age, it states no individual would be able to marry anyone under the age of 16.

Despite conversations of unconstitutionality, infringing upon property rights and risk of estranging foreign investors, the bills will head to the House floor.

Seidel has served as UW’s 28th president since taking over in July 2020 following a tumultuous time that saw the university transition through four presidents in seven years.

The legislation would criminalize people in Wyoming who administer gender-affirming treatments, such as surgery or hormone blockers, to children.

Although two bills addressing the expansion and extension of Medicaid coverage passed through House committees last week, leadership in the Wyoming Legislature said they may not get much farther.

Wyoming looks to crack down on violence against health care workers

The bill comes amid increased violence toward health care workers and concerns that workplace hazards may discourage people from entering health care professions that are already spread thin.

Doctor clarifies what gender affirming care is being done in Wyoming

State Department says don't use Uber in areas around Cancun

State Department says don't use Uber in areas around Cancun

Bertine Bahige holds his daughter in February 2012 after participating in a naturalization ceremony to become a United States citizen at the Campbell County Courthouse in Gillette. Bahige, who was born in the Democratic Republic of the Congo, came to the U.S. as a refugee and has since settled in Gillette, where he teaches math and coaches soccer at Campbell County High School. Bahige has been working to help establish a refugee resettlement program for Wyoming, the only state without such a system in place.

Bertine Bahige is pictured with his family in Gillette recently.