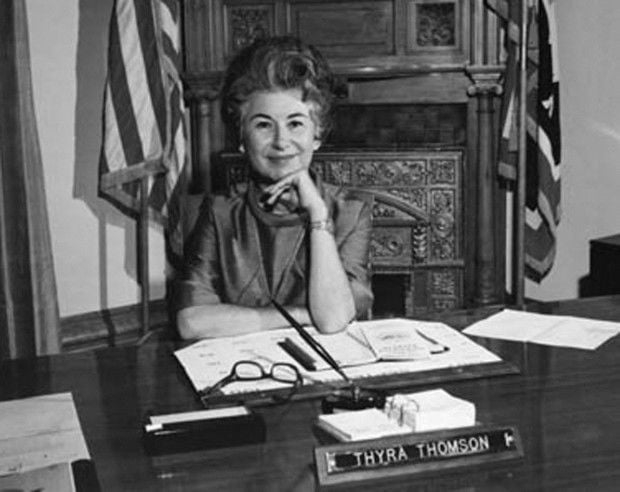 This undated image shows Thyra Thomson in Cheyenne. Thomson served as secretary of state from 1963 to 1987. She died June 11 at age 96. 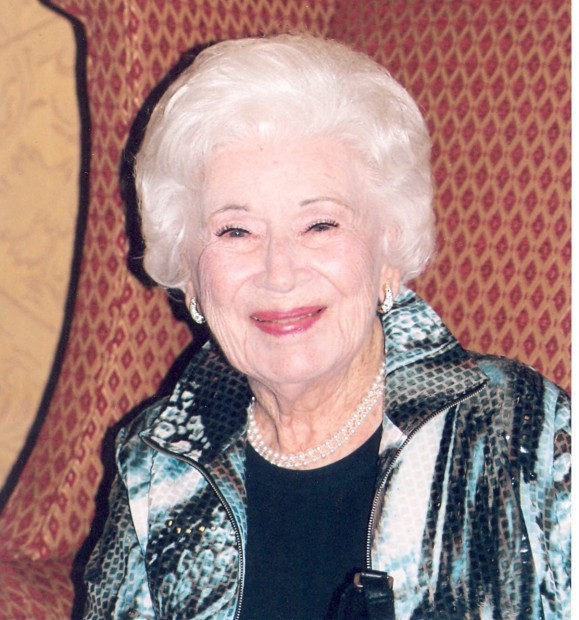 CHEYENNE — Former Wyoming Secretary of State Thyra Thomson was remembered Wednesday as an iconic figure in state government and politics and an outstanding public servant who was widely known as just “Thyra.”

Thomson died Tuesday night at the Cheyenne hospice, according to her oldest son, Bill Thomson. She was 96.

Gov. Matt Mead described Thomson on Wednesday as a trailblazer. She was the first woman elected secretary of state in Wyoming and served from 1963 to 1987

“I have known her since childhood as a wonderful person with an immense amount of character and an abiding love for Wyoming,” Mead said in a media release. “Carol and I will miss her — the entire state of Wyoming will miss her.”

Thomson, a Republican, worked with Govs. Cliff Hansen and Stan Hathaway, both Republicans, and Ed Herschler, a Democrat. She served as acting governor when the chief executives were out of the state.

Thomson was elected president of the North American Securities Administrators Association in 1974 in recognition of her regulation of the sale of new issues of securities. Thomson served in a number of international groups and associations.

A statement from Thomson’s family stated that she led efforts for equal pay for women and recognition of the comparable worth of women’s jobs. It also stated that she was vocal that adequate daycare at affordable prices was essential.

An interview that historian Mark Junge conducted with Thomson in 1993 has been posted by The Wyoming State Archives. In it, she states that she quickly saw while working in state government how it was a “man’s world and a woman’s place.”

Thomson said women then made up about 80 percent of the workforce, but only 2 percent of those employees receiving the highest salaries were women. She noted the irony of that fact in Wyoming, the first state to give women the right to vote.

“There were so many things going on in which there was not justice,” Thomson told Junge. “And, it was natural for me to pursue it, not only in the state but nationwide because Wyoming was the Equality State.”

Her greatest joy, she said in 1986, was her daily contact with constituents and being able to help them. Thomson said she loved it when even students called her Thyra.

After retiring in 1987, she sat on the boards of the Cheyenne Symphony, the Buffalo Bill Historical Center in Cody and the University of Wyoming.

On Wednesday, U.S. Sen. John Barrasso, R-Wyo., issued a statement saying he and his wife, Bobbi, were saddened at Thomson’s death.

“In Washington, I have a picture in my Senate office of Thyra and President Ronald Reagan for all to see,” Barrasso said. “It was taken in Cheyenne when she was secretary of state. It is a constant reminder of Thyra’s leadership, her legacy and her commitment to our state and our nation.”

Maxwell said that when people who have had some contact with state government come into the secretary of state’s office, “They always ask about Thyra.”

“Right up until the end she was going to events. She had that award-winning smile,” Maxfield added.

Jack Speight is a semiretired Cheyenne attorney who was an aide to Gov. Hathaway, who served from 1967-75.

Thomson, he said, “was a great lady, an exceptionally classy woman who could play in the sandbox with the boys and hold her own.”

She was a great supporter of Wyoming sports and the state, he added.

Michael Sullivan was elected to the first of two terms as governor in 1986, as Thomson was leaving state government.

“She was a unique personality who did many things of great credit for the state of Wyoming and represented us well and never quit representing us,” Sullivan said.

“The state and the university have lost a true pioneer and a visionary leader. After graduating with honors from UW in 1939, Thyra Thomson led a remarkable life of service to her state. When she was named a UW Distinguished Alumna in 1969, she held the highest elected executive office of any woman in the country,” Buchanan said

“Thyra was truly one of the outstanding women in Wyoming’s history. We honor her legacy – a modern, well-functioning state department,” Hill said in a release.

Thomson was born on July 30, 1916 in Florence, Colo., the only daughter of Mr. and Mrs. John Godfrey. She was the youngest of seven children, all boys except her.

Her father was a mine superintendent for the Colorado Fuel and Iron Co. He died in a mine explosion when she was 3. When Thomson was in her teens, her mother brought her and her youngest brother to Cheyenne. She graduated from Cheyenne Central High School.

In 1939 she married UW law student Keith Thomson, who grew up on a ranch in Crook County.

Keith Thomson was a highly decorated World War II veteran. After the war he served three terms as Wyoming’s only congressman. In 1960 he was elected to the U.S. Senate but died of a heart attack that December before taking office.

Thyra Thomson returned to Wyoming and was elected secretary of state in 1962. In 1966 she was re-elected by the biggest majority ever received in Wyoming by a candidate for a partisan office. She retired at the end of 1986 after 24 years in office.

Thomson is survived by sons Bruce, Bill and KC and four grandchildren.

She was preceded in death by her husband, her parents and six brothers.

Funeral services are scheduled for 1:30 p.m. on June 21 at the First Presbyterian Church in Cheyenne.

Funeral held for 'queen of Wyoming'

CHEYENNE — Governors, past and present, all three members of Wyoming’s congressional delegation and other dignitaries turned out Friday aftern…

This undated image shows Thyra Thomson in Cheyenne. Thomson served as secretary of state from 1963 to 1987. She died June 11 at age 96.