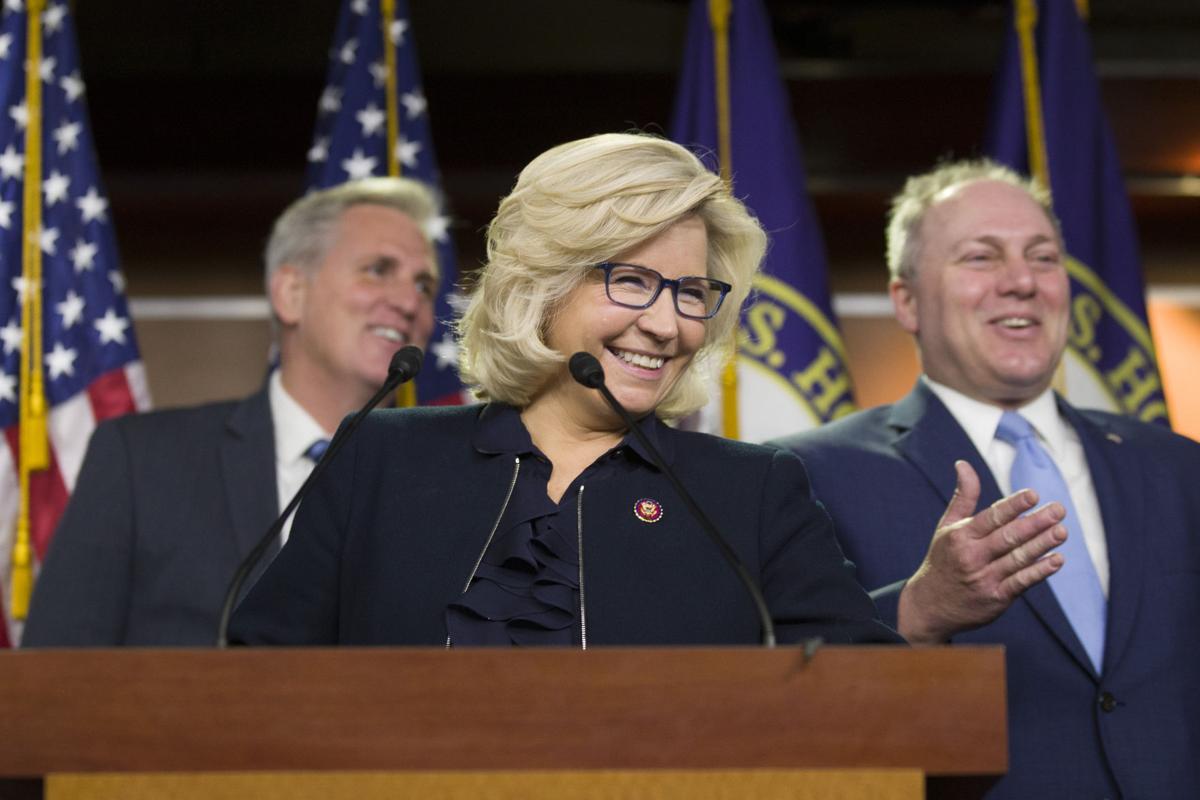 Rep. Liz Cheney arrives for a news conference along with House Minority Leader Kevin McCarthy of California, left, and House Minority Whip Steve Scalise of Louisiana in in Washington in January 2019.

WASHINGTON — House Minority Leader Kevin McCarthy amplified the renewed pressure on No. 3 House Republican leader Liz Cheney on Tuesday, citing rank-and-file concerns about “her ability to carry out her job” after she traded insults with former President Donald Trump.

McCarthy's comments on the Fox News Channel underscored the continued, if not growing, hold that the former president has on the House GOP. Rather than standing by Cheney, McCarthy essentially landed himself in the camp of her critics, whose increasingly outspoken attacks on her suggest her hold on her leadership job may be in renewed peril.

“I have heard from members concerned about her ability to carry out her job as conference chair, to carry out the message," said McCarthy, R-Calif. “We all need to be working as one if we’re able to win the majority. Remember, majorities are not given. They are earned.”

McCarthy was interviewed a day after Trump went on an offensive about his false claims that last November's presidential election was stolen from him. Despite his assertions otherwise, numerous state and federal courts and local election officials have never unearthed evidence of widespread fraud in that voting,

Trump critics have labeled his unfounded claims “The Big Lie,” and he issued a statement trying to use that moniker himself.

“The Fraudulent Presidential Election of 2020 will be, from this day forth, known as THE BIG LIE!” he wrote.

But Cheney, R-Wyo., quickly fired back. She was among 10 House Republicans who voted to impeach Trump for his role in encouraging the Jan. 6 attack by his supporters on the U.S. Capitol, and she used Twitter on Monday to respond to Trump.

“The 2020 presidential election was not stolen. Anyone who claims it was is spreading THE BIG LIE, turning their back on the rule of law, and poisoning our democratic system,” she wrote.

In response to Cheney, Trump issued a fresh statement reiterating his desire to see her defeated by another Republican in next year’s Wyoming GOP primary and claiming that people in Wyoming “never liked her much.”

The divisions come with Republicans optimistic about their chances of winning back control of the House in the 2022 elections. The GOP believes it has a trove of issues to use against Democrats by attacking President Joe Biden's handling of the huge numbers of migrants trying to cross the Southwest border and for not prompting pandemic-shuttered schools and businesses to reopen faster.

In February, conservatives unhappy over Cheney's confrontations with Trump overwhelmingly lost a secret ballot vote of House Republicans aimed at ousting her from her leadership job, 145-61.

But in recent weeks, Cheney's continued willingness to speak out against Trump has prompted fresh criticism of her. Cheney is a daughter of former Vice President Dick Cheney and like him is viewed as part of the GOP establishment, making her a natural target for the party's pro-Trump conservatives.

McCarthy had told reporters that during the House GOP's closed-door meeting that resulted in Cheney keeping her job, he had defended her.

“People can have differences of opinion. That’s what you can have a discussion about. Liz has a right to vote her conscience,” McCarthy said then.

McCarthy struck a completely different tone on Tuesday. He said GOP lawmakers are concerned about the party's messaging, which is part of the No. 3 leader's job.

“What’s our best step forward that we could all work together instead of attacking one another,” McCarthy said.

Copyright 2021 The Associated Press. All rights reserved. This material may not be published, broadcast, rewritten or redistributed without permission.

Wyoming to opt out of federal supplemental unemployment benefits

The decision, which Gov. Mark Gordon said is intended to address high rates of unemployment, will end the weekly $300 payments made available through the CARES Act.

The decision to oust Rep. Liz Cheney from leadership comes after she repeatedly criticized former President Trump for undermining democracy.

"I will not sit back and watch in silence while others lead our party down a path that abandons the rule of law and joins the former president’s crusade to undermine our democracy,” Cheney said.

Wyoming Secretary of State Ed Buchanan has no current plans to run for Rep. Liz Cheney's House seat in in 2022, despite multiple speculative reports that he might enter the race.

McCarthy has signaled his desire to remove Cheney for several weeks. His Monday note seemed designed to provide whatever cover wavering GOP lawmakers might need to toss Cheney from her position.

Cheney actually has a more conservative voting record in the House than Stefanik, a onetime Trump critic who evolved into an ardent ally. She previously opposed Trump's tax cuts.

The growing scrum, ranging from a retired Army colonel to a rural kombucha brewer, is on the minds of Cheney allies and opponents alike.

Other suggestions included establishing new centers on campus like an “entrepreneurship and innovation center” and developing a cultural competency curriculum.

Rep. Liz Cheney arrives for a news conference along with House Minority Leader Kevin McCarthy of California, left, and House Minority Whip Steve Scalise of Louisiana in in Washington in January 2019.