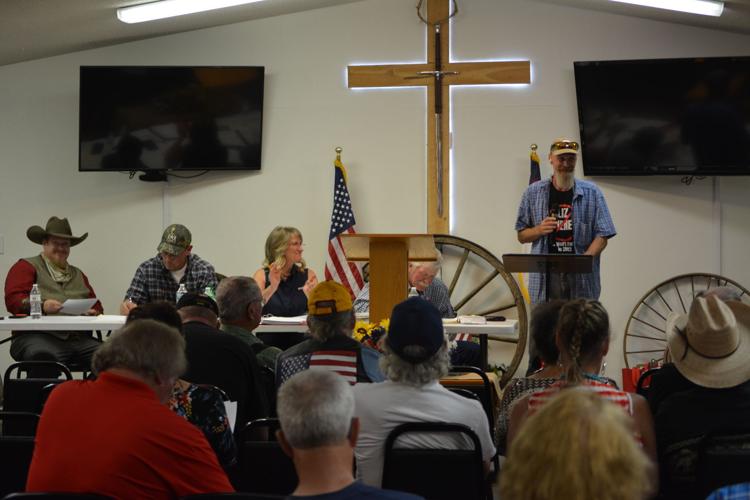 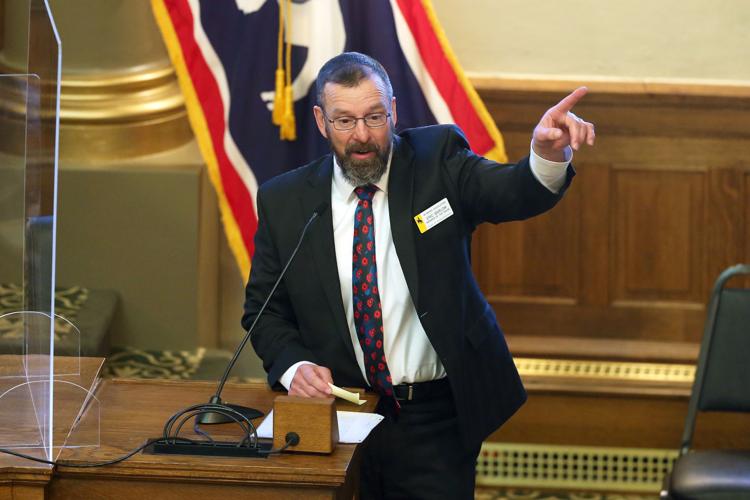 Speaker of the House Rep. Eric Barlow, R-Gillette, gives a speech during the first day of the 66th Wyoming Legislature on March 1, inside the state Capitol. Barlow and Senate President Dan Dockstader, R-Afton, are calling for Troy Bray's resignation after the Park County GOP committeeman sent an obscene email to Sen. Tara Nethercott.

After a Republican official in Park County sent an email to Sen. Tara Nethercott telling her that if he was as “despicable a person as you, I would kill myself,” legislative leaders have spoken out and asked the official to resign.

Now, Speaker Eric Barlow, R-Gillette, and Senate President Dan Dockstader, R-Afton, are calling for the “immediate resignation of Troy Bray from his position as a Park County Precinct Committeeman,” the statement read.

“We further call upon the leadership of the Wyoming and Park County Republican Parties to join us in seeking the immediate resignation of Troy Bray,” the statement continued.

Legislative leaders aren’t just focusing on Bray, however, they’re using this as a moment to tackle a bigger issue they see.

Dockstader and Barlow are in part calling for his resignation because Bray holds an elected position on the central committee, meaning that he can’t be removed by leaders — he must resign to relinquish the position.

But that statute is subject to change.

“We will be assisting the Republican Party in ensuring there are appropriate statutory means to remove an elected official for such egregious behavior in the future,” they said in the statement.

Barlow confirmed to the Star-Tribune that a bill draft of this sort has been requested.

“It seems like a body should have a means, an authority to police its own,” he said.

Bray’s email was nothing short of obscene.

“If I were as despicable a person as you, I would kill myself to rid the world of myself. You sicken me. Thank you for ensuring that the people of Wyoming are subjected to tyranny once again,” Bray wrote in a Sept. 12 email.

He ended his email to the state senator, “ F—- YOU C—-” and signed it with his official titles: “Precinct Committeeman, Park County (9-7)” as well as “Secretary, Park County Republican Men’s Club.” A precinct committeeman is part of the county GOP’s central committee.

Kimmet previously told the Star-Tribune that Bray did not send the email in his official capacity.

“He sent that on his own. He may have signed it as a precinct person because that’s what he is,” Kimmet said. “He did not sign that in the capacity of the central committee.”

As of Tuesday, prior to the statement from legislative leadership, Bray was standing firm in his position.

“I have apologized to Senator Nethercott for the language I used,” Bray said Tuesday. “No, I will not resign my elected position, and have not been asked to by leadership,” he sad in an email to the Star-Tribune.

Bray did not respond to further request for comment.

Bray’s email started off relatively mellow, discussing Nethercott’s handling of a bill that died in the last legislative session that would have barred the state from requiring COVID-19 vaccines. The Senate Judiciary Committee voted the bill down 4-1 in March. Nethercott, a Cheyenne Republican and lawyer, is the chairwoman of the committee.

“I would just like to express to you how I feel about your handling of the bill that would already have negated Biden’s dictatorial actions for Wyoming’s citizens,” the email, which the Star-Tribune obtained, states. “You have never been my favorite person, but you have made a lasting enemy of me with these actions. Your shortsightedness and ignorance are astounding, and only your moral turpitude can compete with them as your defining character feature.”

“Thank you for your email. I appreciate hearing from you and sharing your concerns about the troubling vaccine requirements from the Biden administration. I share your concerns,” her email began.The state senator then went on to explain the intricacies involved in Wyoming’s fight against the federal vaccine mandates — She noted that the legislation Bray referenced, Senate File 94, would have had no impact on the Biden administration’s executive order because it only covered state government actions, not federal.

“Please continue to reach out with questions or comments, we do appreciate hearing from you and I hope you have found this information helpful,” the email ended. Her email did not reference Bray’s mention of suicide or profanities.

This is not the first time Bray had made a violent statement during his time as a committeeman, according to the Powell Tribune.

“There are power-hungry dictators with an MD behind their name that need to be fired — or executed,” he said in March Park County Republican Party Central Committee meeting that was called to discuss mask mandates. “I’m good with either one.”

Dockstader and Barlow’s statement spoke on behalf of the entire state in their statement.

“Mr. Bray’s bullying and intimidation have no place in Wyoming.”

A Republican official in Park County told Sen. Tara Nethercott in an email that if he was as “despicable a person as you, I would kill myself.”

Speaker of the House Rep. Eric Barlow, R-Gillette, gives a speech during the first day of the 66th Wyoming Legislature on March 1, inside the state Capitol. Barlow and Senate President Dan Dockstader, R-Afton, are calling for Troy Bray's resignation after the Park County GOP committeeman sent an obscene email to Sen. Tara Nethercott.