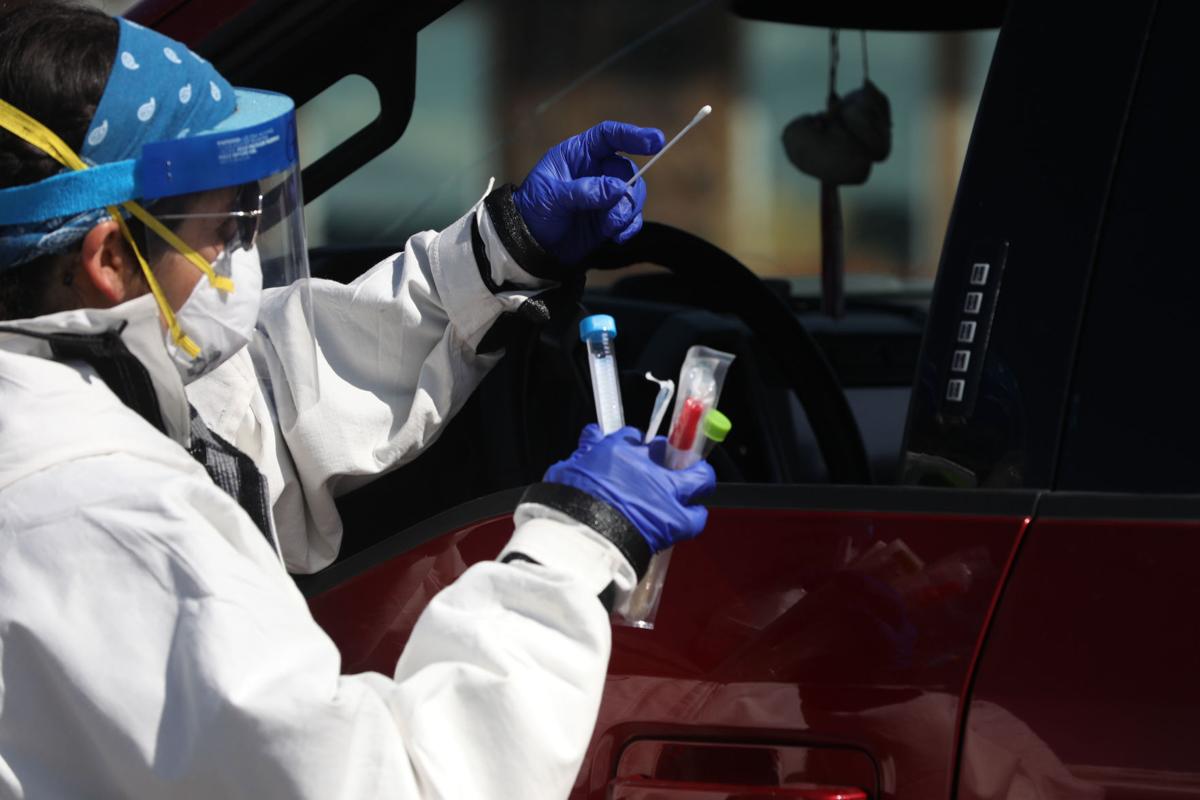 Nurse Cristina Gonzalez takes a nasal swab to be sent for COVID-19 testing at a drive-up clinic in Arapahoe on April 24. Northern Arapaho Business Council Chairman Lee Spoonhunter said Monday that SageWest hospital in Riverton turned away potential coronavirus patients, who were then moved to a transient camp on the tribe's grounds. 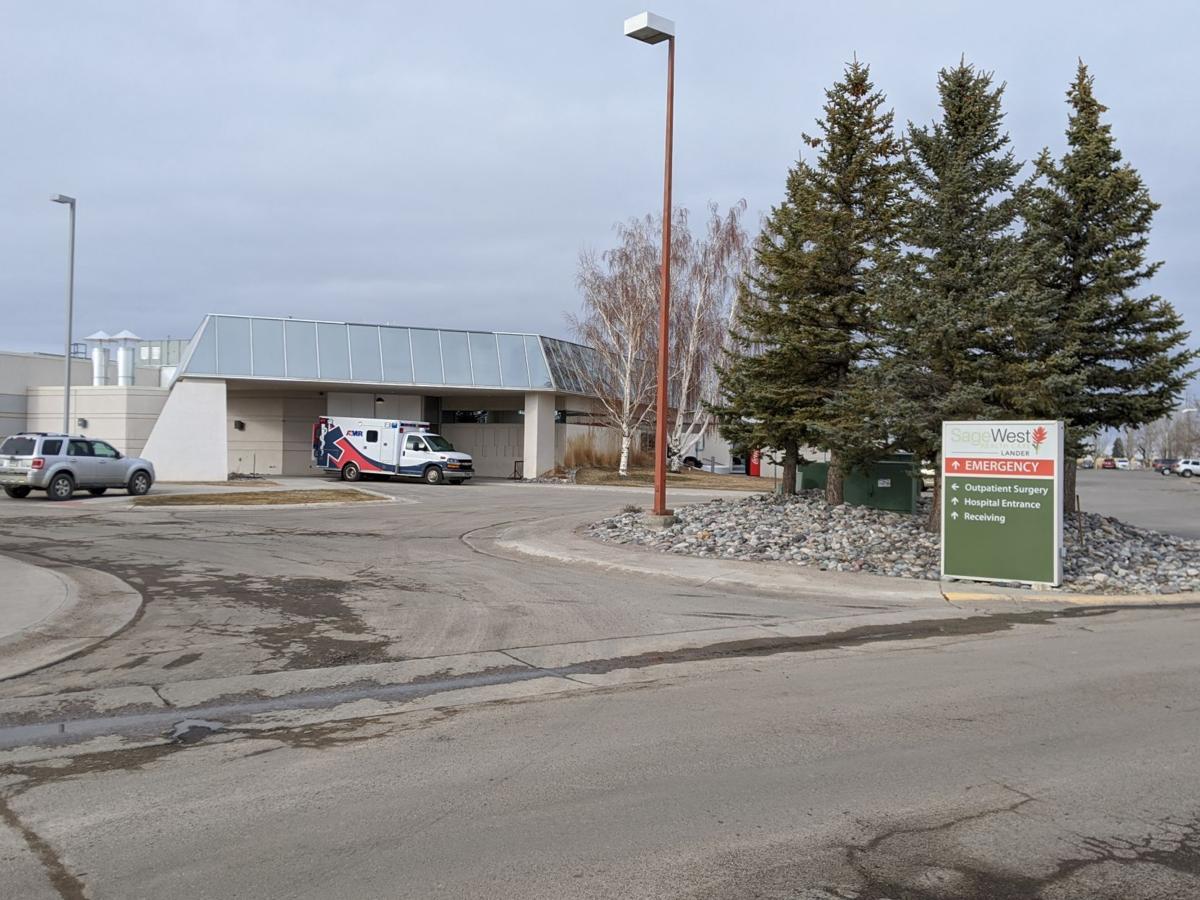 Emergency room staff at the SageWest hospital in Riverton allegedly turned away potential COVID-19 patients from the Wind River Indian Reservation at the start of the pandemic, Northern Arapaho Business Council Chairman Lee Spoonhunter told state lawmakers Monday, leaving tribal members to figure out their care on their own.

Spoonhunter said that tribal members seeking medical treatment were then driven away from the facility in the backs of sheriff’s trucks and placed in the care of the Wind River Health Clinic, which had been treating patients at a transient camp on the tribe’s grounds in Fort Washakie.

“That was very disturbing — that our tribal members had gone to the Riverton emergency room where they were wanting to be treated for being sick and then were told they needed to go to the transient camp, to the powwow grounds,” Spoonhunter told committee members. “And then here comes the sheriff’s office and they’re put on the backs of trucks.”

SageWest denied the allegations in a statement to the Star-Tribune late Monday afternoon.

“This information presented today is without merit,” SageWest wrote in a statement. “SageWest Health Care follows all appropriate regulatory and compliance guidelines for patients seeking care at our facility. To deny care is a violation of federal and state law — as well as our mission of Making Communities Healthier.

“As it relates to the detection, testing, and treatment of COVID-19, we continue to follow guidelines and protocols as outlined by the Centers for Disease Control and Prevention (CDC) — just as we have since March,” the hospital added.

Spoonhunter said the tribe later purchased a van outfitted with personal protective equipment specifically to transport COVID-19 patients and spoke with hospital management to ensure that the tribe was contacted for future transportation concerns.

The news came as part of a Monday briefing on the pandemic’s impact on the Northern Arapaho and Eastern Shoshone tribes to the Legislature’s Select Committee on Tribal Affairs, where tribal officials discussed logistical and social challenges facing both tribes in their efforts to combat the virus.

The Northern Arapaho tribe — which has accounted for more than a quarter of the state’s total COVID-19 deaths — struggled with capacity issues at the start of the pandemic largely due to multiple generations of the same family living under one roof, Spoonhunter told committee members. If one member of the household was exposed to the virus, he said, other people residing in that household would need to be isolated, as would those who were sick.

The tribe initially turned to its main meeting hall, and later the Wind River Hotel and Casino, to isolate individuals displaced by the virus. Eventually, the tribe transitioned to a makeshift transient camp of eight trailers with a capacity of 32 people at the powwow grounds.

Those methods — plus a mask mandate on the reservation backed by both tribes — has helped to reduce the number of infections. According to Spoonhunter, the tribe had reported just one new COVID-19 case last week, down from a high of 35 earlier in the crisis, despite Fremont County’s case count rising in recent weeks.

The main concern, representatives for both the Eastern Shoshone and Northern Arapaho tribes said, centers on the possibility of a second outbreak later in the fall, especially with schools back open. According to Spoonhunter, the tribe will be on the hook for the costs associated with tribal members involved in an outbreak at any of the schools in Lander or Riverton, potentially costing money that could be used to help contain the virus’s spread into the coming year.

This is of particular concern, Spoonhunter said, when the tribe only has the ability to enforce its own public health orders within the boundaries of the reservation, leaving them more susceptible to infection by those outside of the reservation and on the hook for managing the costs.

While virtual learning has already been implemented at the Fort Washakie, Wyoming Indian and Arapahoe districts, as well as St. Stephens Indian School, some residents on the reservation attend classes at other schools in Fremont County, where in-person learning is currently taking place.

“We’re concerned if we have a tidal wave of outbreaks, the responsibility is handed to the tribe,” Spoonhunter said. “This is why we kept our school closed and why we strongly advised virtual learning. We have children we need to take care of, and we don’t have the resources if there is that tidal wave of an outbreak.”

According to a spokesperson for the Wyoming Department of Health, the agency has been working closely with the tribes, and a member of the department’s epidemiology staff was assigned to act as a tribal liaison for COVID-19 matters in addition to providing technical assistance on interviewing cases and conducting contract tracing.

As tribes have public health authority on the Wind River Reservation, both tribes are responsible for issuing and tracking quarantine and isolation orders for contacts and cases, though “nearly all of the testing” from the reservation is conducted by the state.

During the pandemic, tribal members have also faced discrimination in communities such as Lander and Riverton, Spoonhunter said. When testing for the virus began in March, Spoonhunter told lawmakers that tribal members were met with criticism and racism within the community, including being referred to as “those Indians with the virus.”

“Unfortunately, those things happen,” Spoonhunter said. “When we were trying to control the spread of the virus, Fremont County was behind us and lacked the education and knowledge of what we were trying to do.”

As a date for a potential vaccine remains a question mark, both tribes now look to the future with uncertainty. Though the tribes have yet to spend all of their federal coronavirus relief money prior to the Dec. 30 deadline, revenues — and future resources to combat the virus — are still of concern. While the Northern Arapaho Tribe has taken steps to reopen the Wind River Hotel and Casino as a means to generate revenue, the Eastern Shoshone Tribe has yet to reopen its own Shoshone Rose Casino.

In the meantime, Snyder said the Eastern Shoshone Tribe is working on developing infrastructure to combat a second wave of the virus, including working on setting up their own testing facility using funding from state and federal sources. However, she said she’s so far been “dismayed” at the lack of leadership from the state and national level to take more aggressive measures to stall the virus.

“We have something really looming here on the horizon,” she said.

As of Thursday, less than 60% of Wyoming households had self-responded to the survey and about 23% had been counted by census takers during non-response follow-up.

"We’re definitely hitting some spikes and it’s all these social gatherings," Fremont County spokesman Michael Jones said. "You hate to say churches, but it is family and social gatherings where people are inside and let their guard down."

Nurse Cristina Gonzalez takes a nasal swab to be sent for COVID-19 testing at a drive-up clinic in Arapahoe on April 24. Northern Arapaho Business Council Chairman Lee Spoonhunter said Monday that SageWest hospital in Riverton turned away potential coronavirus patients, who were then moved to a transient camp on the tribe's grounds.