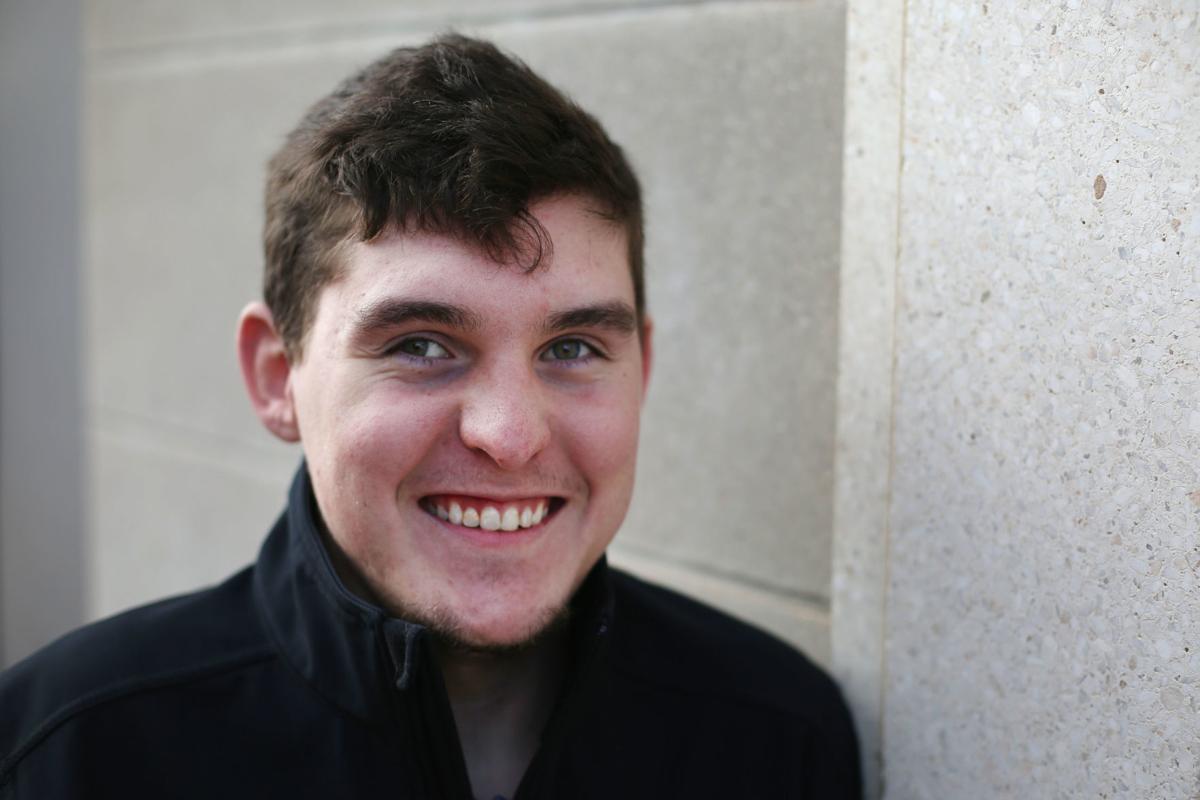 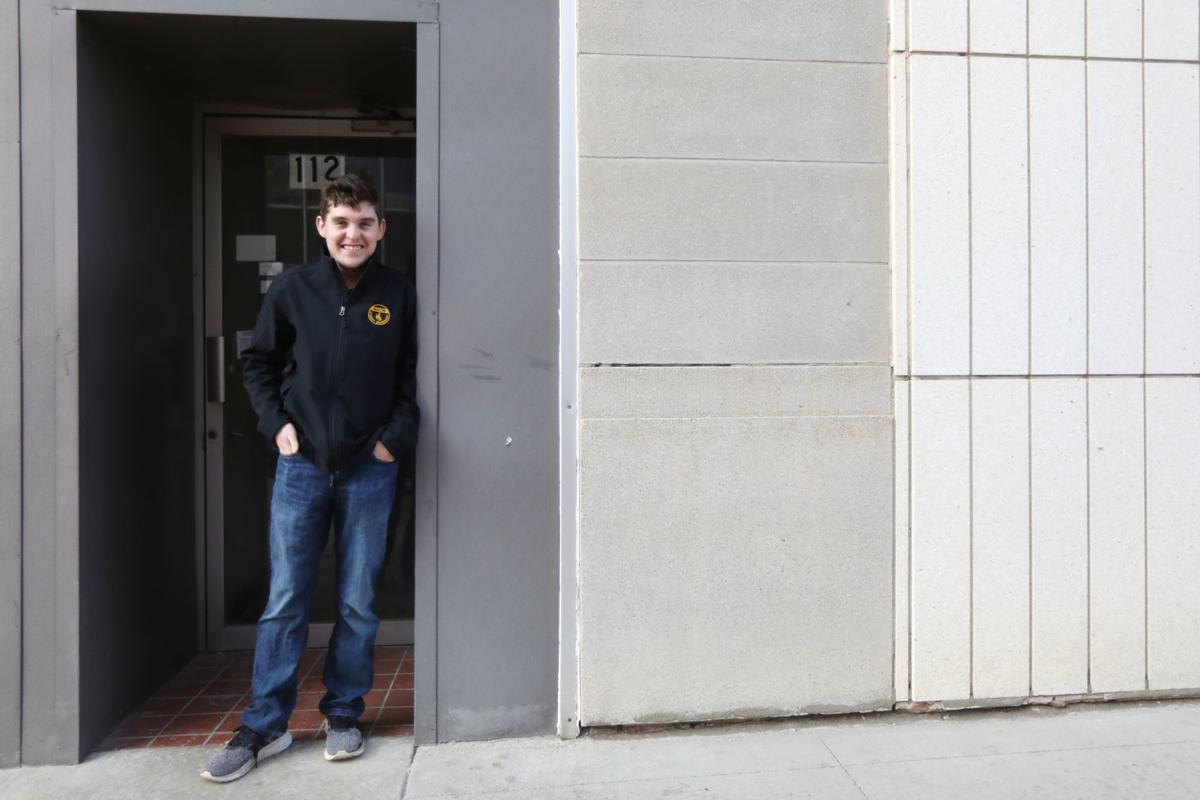 Kevin Millburn, 20, poses for a portrait Thursday in downtown Casper. Millburn is the youngest lobbyist working with the Wyoming State Legislature.

Now a 20-year-old student at the University of Wyoming, Millburn had done well in school, applied for (and received) one of the state’s coveted Hathaway Scholarships and enrolled himself at UW, the state’s only four-year public university.

When he got there, however, Millburn found himself saddled with a classic case of sticker shock.

The scholarship — designed to incentivize Wyoming’s students to attend college within their home state — only covered a fraction of his cost of attendance. Though the scholarship is need-based, a fact he acknowledged, he recognized other students might not recognize that and might not be aware that other options are available to them.

“The biggest issue that I see not only in high school but also in college as well is that we only hear about the Hathaway, and so that’s the only one people really get,” he said in an interview earlier this week. “And then they go into college and it only pays for their tuition. And once they get out of the dorms and everything they say, ‘Well, what do I do now? How am I going to get all this money?’”

This was particularly true given the realities of off-campus living. Food costs money. Rent, utilities and internet access cost money. And together, they begin to add up, particularly on top of expenses of academia like books, lab supplies and even extra printer paper.

Money is out there, Millburn knew. He had applied for an extra scholarship on top of the Hathaway — the API Scholarship — which helped him even further. But for others just like him, awareness was a problem.

“Right now, kids have nothing,” he added. “They just go into college blind.”

Millburn wanted something done about it. So, one day, he decided to go to his representative in the Wyoming Legislature (Casper’s Jerry Obermueller) to talk about it. After some conversation with Millburn around his ideas — more promotional tools for lesser-known scholarships, for example, or a better way to navigate the myriad scholarships that are out there — the second-term representative offered a suggestion of his own: Why don’t you lobby for it yourself?

So Millburn decided to, filing paperwork with the secretary of state’s office earlier this winter. And in between classes this February, Millburn will be making the drive from Laramie as many days as possible, rubbing shoulders with a lawmaker for an issue he feels is worth fighting for.

For Millburn, his decision represents something more than just a single issue but a civic duty to make one’s voice heard in an institution purported to be “The People’s House,” a place where the common resident of Wyoming is encouraged to engage with their leaders and become an active part of the legislative process.

Citizen lobbyists are not uncommon, with some — like longtime Cheyenne observer Bill Winney — registering as lobbyists despite being private citizens. But for Millburn, coming into the legislature unitiated is, admittedly, nerve-wracking. But he also recognizes the importance of getting involved.

“One of the reasons I registered to be a lobbyist is to let people know or to let Cheyenne know that citizens can take on these issue, too,” Millburn said. “You don’t need to be a part of the private sector. You don’t need to be representing a larger branch or anything. You could just represent yourself or represent the average citizen, you know? Just to let people know that if you really want to get stuff done, sometimes you’ve got to put it in your own hands to do it.”

Have an event you’d like highlighted here? Email me with the date, time, and place!

The biggest political story this week was word that Rep. Liz Cheney – long-rumored to be looking at a U.S. Senate bid this year to replace the retiring Mike Enzi – would not be making the jump and, instead, would be gunning for re-election to the House of Representatives.

This played well for Senate candidate Cynthia Lummis who, in the 24 hours following the announcement, received several endorsements from influential conservative groups like the Club For Growth and the Senate Conservatives Fund, which each reached out to members for contributions to her campaign.

But after months on the fence – and so many organizations seemingly waiting for Cheney’s announcement before committing to Lummis – one may be left to wonder whether the congresswoman’s decision was a question of whether she thought she could win, or whether she was simply needed more in her current position in House leadership.

Looking back to last summer, Cheney made headlines after a private spat with NRCC chairman Tom Emmer over the party’s fundraising strategy. As it turns out, Cheney had reason to be concerned: at a meeting of the Ripon Society this week, Emmer announced that the NRCC had been outraised a whopping $40 million by the DCCC in 2019 – the highest such difference in a decade.

Though Cheney told reporters in a press call last week that she had the upmost confidence in NRCC leadership heading into 2020, electing Republicans across the nation – rather than her own political ambitions – seemed to take center stage.

“I believe I can have the biggest impact for the people of Wyoming by remaining in leadership in the House of Representatives and working to take our GOP majority back,” she said in a statement.

Gordon named most popular governor in America: For the first time in his career,Gov. Mark Gordon topped the Morning Consult's quarterly rankings for Most Popular Governor, dethroning Massachusetts' Charlie Baker in a three-way tiebreaker. The winning numbers? 69 percent approval, 11 percent disapproval. (via The Morning Consult)

Legendary political activist "Capt. Bob" dies at 87: Capt. Bob Morris, whose half-century of political activism made him a countercultural hero and one of the most recognizable figures in Jackson Hole, died last week at the age of 87. (via the Jackson Hole News & Guide)

Lawmakers eye LCSD1 as pilot district for Medicaid billing: Wyoming could soon join the rest of the country and use Medicaid to cover K-12 special education services, and the new funding model could get a test run in Laramie County School District 1. (via the Wyoming Tribune-Eagle)

Albertsons buys former Shopko building: After Shopko’s closure in Powell left a gaping hole in the community’s retail sector, Albertsons announced it would be purchasing the property, though no new terms or tenants have been made public. (via The Powell Tribune)

UW gun case sent back to Kricken’s court: A lengthy legal battle over one man’s open carry of a weapon at the University of Wyoming in 2017 hit a new twist this past week, after Albany County circuit court Judge Robert Castor sent the case back to his downstairs neighbor in the courthouse, district court Judge Tori Kricken, whose initial ruling on the case was overturned by the Supreme Court in 2019. (via The Laramie Boomerang)

John Barrasso was the subject of an interesting piece in E&E News this week, in which the Senator was floated as a possible replacement for Alaska’s Lisa Murkowski as chair of the Senate’s Committee on Energy and Natural Resources – an influential seat in the fight over coal’s future. He also spoke on television several times on impeachment as the Senate prepares for its trial against President Donald Trump this week.

Mike Enzi praised the passage of the USMCA trade agreement through the Senate and signed on as a cosponsor to S.Res. 478 - A resolution designating the week of January 26 as "National School Choice Week."

Liz Cheney had an extremely busy week in D.C. On Tuesday, Cheney expressed support for Iranian protestors in the wake of revelations the government had shot down a passenger airliner during attacks on U.S. occupied military bases in Iraq and, later in the week, appeared on a segment with talk show host Hugh Hewitt to rip previous Democratic administrations for their policies in the Middle East.

The congresswoman also signed onto a 17-bill legislative package sponsored by the Western Congressional Caucus aimed at modernizing the Endangered Species Act and met with WYDOT Director Luke Reiner to discuss “how best to use federal resources to address the transportation and infrastructure needs of Wyoming,” a spokesman wrote.

Have any tips or suggestions to make this newsletter better? Let me know! Call me at 307-266-0634, email me at nick.reynolds@trib.com or follow me on Twitter, @IAmNickReynolds

The bill's sponsors believe the change would have a tangible economic and social impact for the people of Wyoming.

Gordon advocated for tens of millions of dollars in spending for a number of new programs he hopes will remain untouched by lawmakers.

Dorrell, of Laramie, is a Trihydro Corporation executive and University of Wyoming graduate.

Amid budget challenges, state retirees call for an increase to their pensions

Paired with an average inflation rate of 1.5 percent annually over the past 12 years, the retirees have seen the buying power of their pensions diminish substantially.

The bill seeks to lock in the reduced rates for college tuition paid by Wyoming residents married to or born to uniformed military members who were stationed in Wyoming during their enrollment.

After the repeal effort’s unprecedented success in the 2019 session, groups like Conservatives Concerned About the Death Penalty and the American Civil Liberties Union have been working to keep momentum going into the 2020 budget session.

The Wyoming Legislature voted against a 2019 bill that would have made the Equality State the third in the country to end the practice.

“It is clear that renewables play an important part,” Gov. Mark Gordon told reporters. “But it is also true that the technologies for fossil fuels have improved remarkably.”

307 Politics: Wyoming’s leadership ambitions, wins for the West, and other news

Boasting just one-fifth of one percent of the nation’s population, Wyoming should be one of the least influential states in the country. Yet, …

The former director of a Wyoming progressive group is eyeing the seat of longtime Rep. Cathy Connolly.

Kevin Millburn, 20, poses for a portrait Thursday in downtown Casper. Millburn is the youngest lobbyist working with the Wyoming State Legislature.