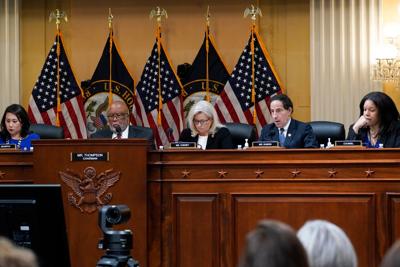 On July 12, Rep. Liz Cheney ended the latest Jan. 6 committee hearing in Washington D.C. by raising the possibility that former President Donald Trump had committed witness tampering. The same day and 1,700 miles to the west, Harriet Hageman, Trump’s pick to unseat her, made her way down Center Street in downtown Casper, waiving to throngs of spectators in one of central Wyoming’s biggest summer parades.

The dichotomy is notable, especially in a state where Cheney is facing increasing criticism that her work on the committee is taking too much of her focus from issues back home. That criticism appears to be hurting her political prospects in Wyoming.

Nearly 60% of Wyoming Republicans who plan to vote in next month’s primary say her service on the Jan. 6 committee makes them less likely to vote for her, a new Casper Star-Tribune poll shows. Even when factoring in Democrats and independents who plan to vote in the GOP primary, only 22% of voters here say her work on the committee makes it more likely that they will support her.

“People could be viewing Cheney’s participation with the committee as a distraction from Wyoming issues,” said Dr. Jim King, political science professor at the University of Wyoming. “Time spent on that is time not spent on something else.”

The Casper Star-Tribune is planning a series of stories tied to its recent poll of likely voters in Wyoming's Republican primary.

Editor's note: The demographic piece had originally been slated to run Friday.

The same poll found Cheney trailing Hageman by 22 points with only a month until the primary. The poll, conducted for the Star-Tribune by Mason-Dixon Polling & Strategy, surveyed 1,100 registered Wyoming voters likely to participate in the primary. It is the first independent, in-state poll to be conducted on one of the nation’s most watched races. It has a margin of error of plus or minus 3%.

Cheney’s political favor among Wyoming Republicans faltered soon after the Jan. 6 attack at the Capitol, when she famously told interviewers that Trump was responsible for the riot.

Cheney was among only 10 Republicans in the House who voted to impeach Trump, and she remains a steadfast critic of the former president, whom she says represents a threat to democracy and the rule of law.

At the time of the Jan. 6 riot, Cheney was the third-ranking Republican in the House. Her consistent criticism of the former president as a threat to democracy led her GOP colleagues in Congress to oust her from leadership. She also angered the Wyoming GOP, which censured her and later symbolically voted to no longer recognize her as a Republican.

Despite the backlash, she continued to speak out against Trump and kept reminding anyone who would listen about the severity of the Jan. 6 attack. Eventually, she landed a role as vice chairman of the investigative committee, one of only two Republicans on the panel.

Voters say Trump’s endorsement of Hageman has had little influence on their decision, the poll shows. In contrast, Cheney’s work on the commission is having a far greater influence on the race.

Half of the people who plan to vote in next month’s primary say that have been following the Jan. 6 hearings closely or very closely, with Republicans being less likely than Democrats to have paid attention to the proceedings.

The poll asked voters whether they approved or disapproved of Cheney’s decision to serve on the committee. Six in 10 people who plan to vote in the primary said they disapproved of her choice, while 29% approved. In a party breakdown, eight in 10 Democrats backed her service, while more than two-thirds of Republicans disagreed.

Questions on the Jan. 6 committee
Infogram

Interviews with voters conducted by the Star-Tribune mirrored those results.

When John Luber, a registered Republican and groundskeeper at Casper’s David Street Station, was asked why he’s not voting for Cheney, he said it’s due to “her basic stance on January the 6th.”

“I’m still up in the air about the whole thing,” he said. “I think they’re making a big thing. It wasn’t an insurrection, it was just a demonstration.”

Lubner said he plans to vote for Hageman, who has called the Jan. 6 hearings a “Stalinist show trial.”

“They hate the fact that she’s on the Jan. 6 committee” said Brad Coker, managing director of Mason-Dixon, the polling company that performed the survey for the Star-Tribune.

Across the aisle, Cheney has far more support for her service on the committee: 61% of Democrats who plan to vote in the primary say Cheney’s service makes them more likely to support her.

“When I saw her comments and her leadership in the Jan. 6 hearings ... I was like, ‘There’s no mistake.’ She represented, for me, a woman with guts and determination, who wanted to look and find out what the facts were before moving on,” said Rob Johnston, who’s lived in Wyoming since 2002 and has been a registered Democrat almost that entire time.

While Democratic support for Cheney may be substantial, the poll’s finding suggest there are not nearly enough Democrats in Wyoming to help her win — unless the vote is decided by a couple thousand ballots.

Despite all of that, Cheney is sticking to her guns.

“I will never violate my oath of office and if you’re looking for somebody who will [then] you need to vote for somebody else on the stage, because I won’t,” she said in a recent debate.

The second Jan. 6 hearing by the numbers

The second Jan. 6 hearing by the numbers

5 witnesses were scheduled to testify in the second hearing

5-10% chance of Trump winning, according to his campaign manager

8,000 dead people were alleged to have voted in Pennsylvania in another false claim

A reported 68% error rate in voting machines in Michigan was .0063% in reality

$250 million was raised by Trump after the election

2 teams emerged from the Trump camp

The poll results are in: Hageman holds commanding lead over Cheney

Cheney does better among women, younger people and those who've spent less time in Wyoming, the poll shows. 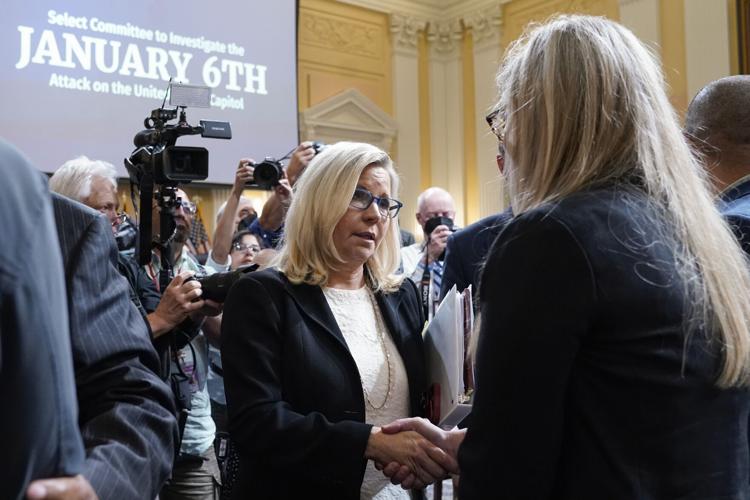 Vice chair Rep. Liz Cheney, R-Wyo., greets Erin Smith, widow of U.S. Capitol Police officer Jeffrey Smith, as the hearing with House select committee investigating the Jan. 6 attack on the U.S. Capitol ends on July 12 at the Capitol in Washington. Nearly 60% of Republican voters who plan to participate in next month's primary say Cheney's work on the committee makes it less likely they will vote for her. 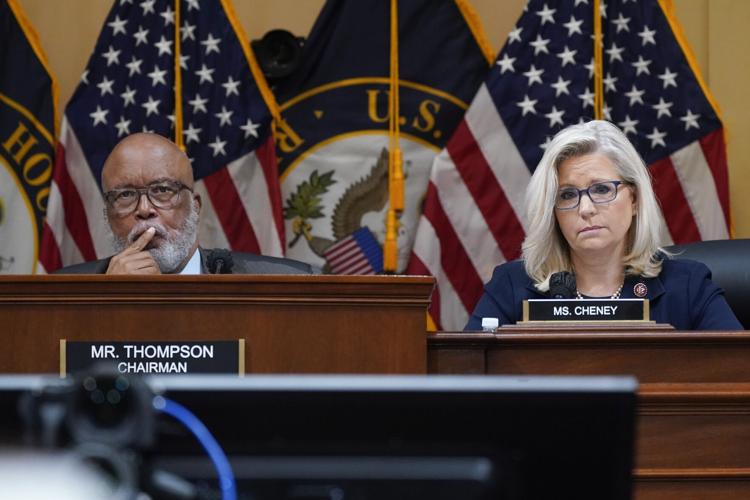 Chairman Bennie Thompson, D-Miss., and Vice Chair Liz Cheney, R-Wyo., listen as Cassidy Hutchinson, former aide to Trump White House chief of staff Mark Meadows, testifies as the House select committee investigating the Jan. 6 attack on the U.S. Capitol holds a hearing on Tuesday at the Capitol in Washington. Cheney has made it clear that criminal referrals could grow out of the committee’s work.