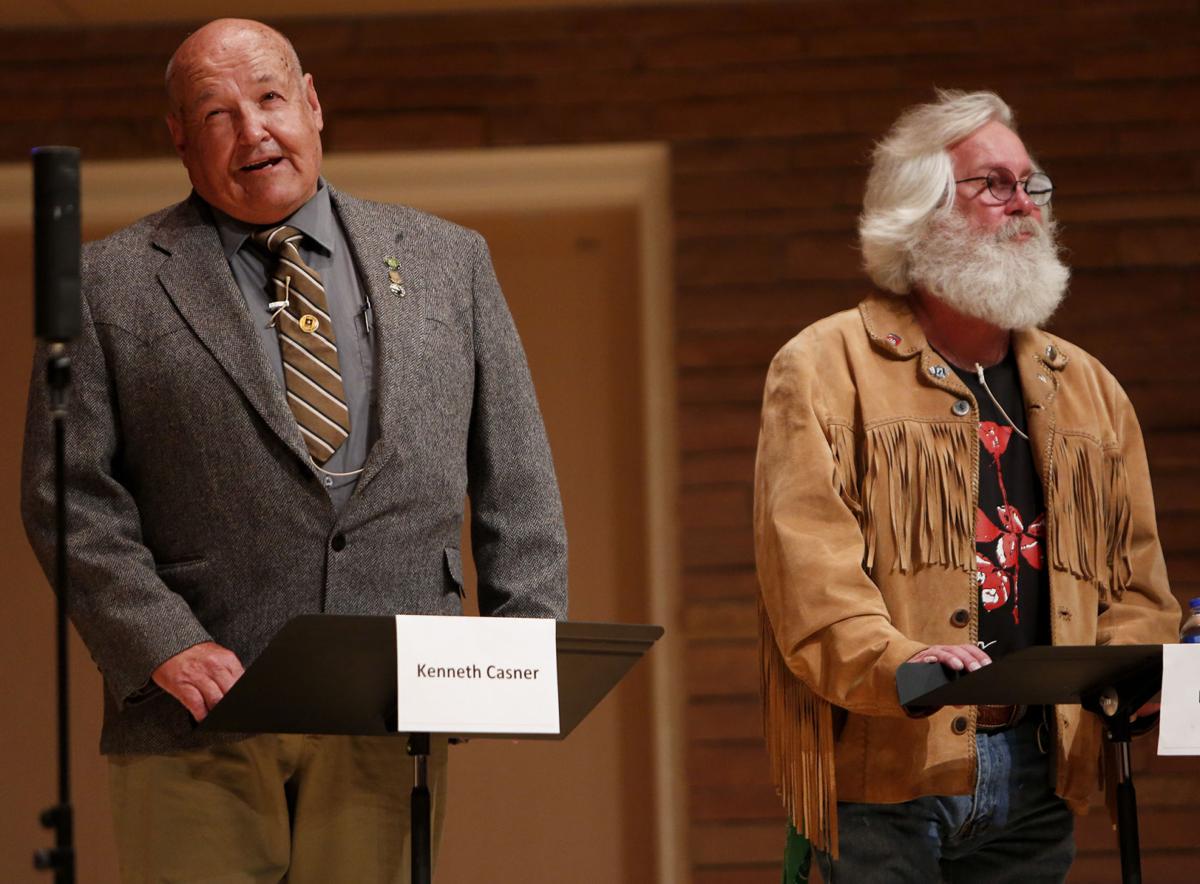 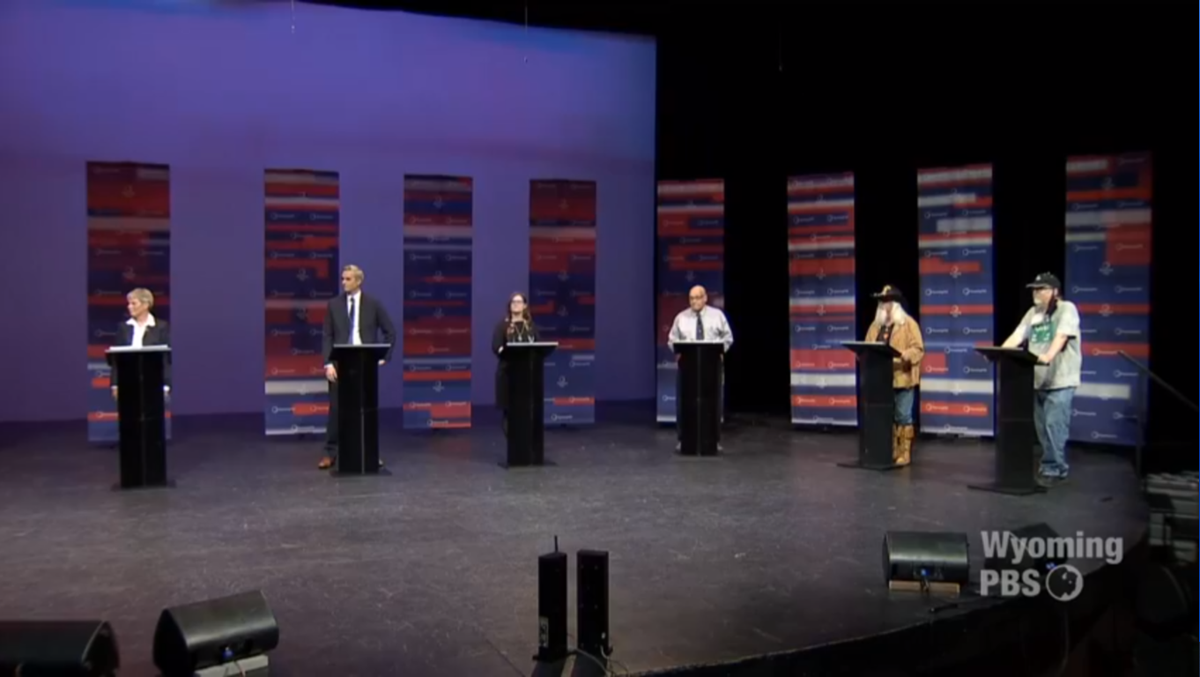 All six U.S. Senate candidates in the upcoming Wyoming Democratic primary took the stage Thursday night in Riverton for a debate. 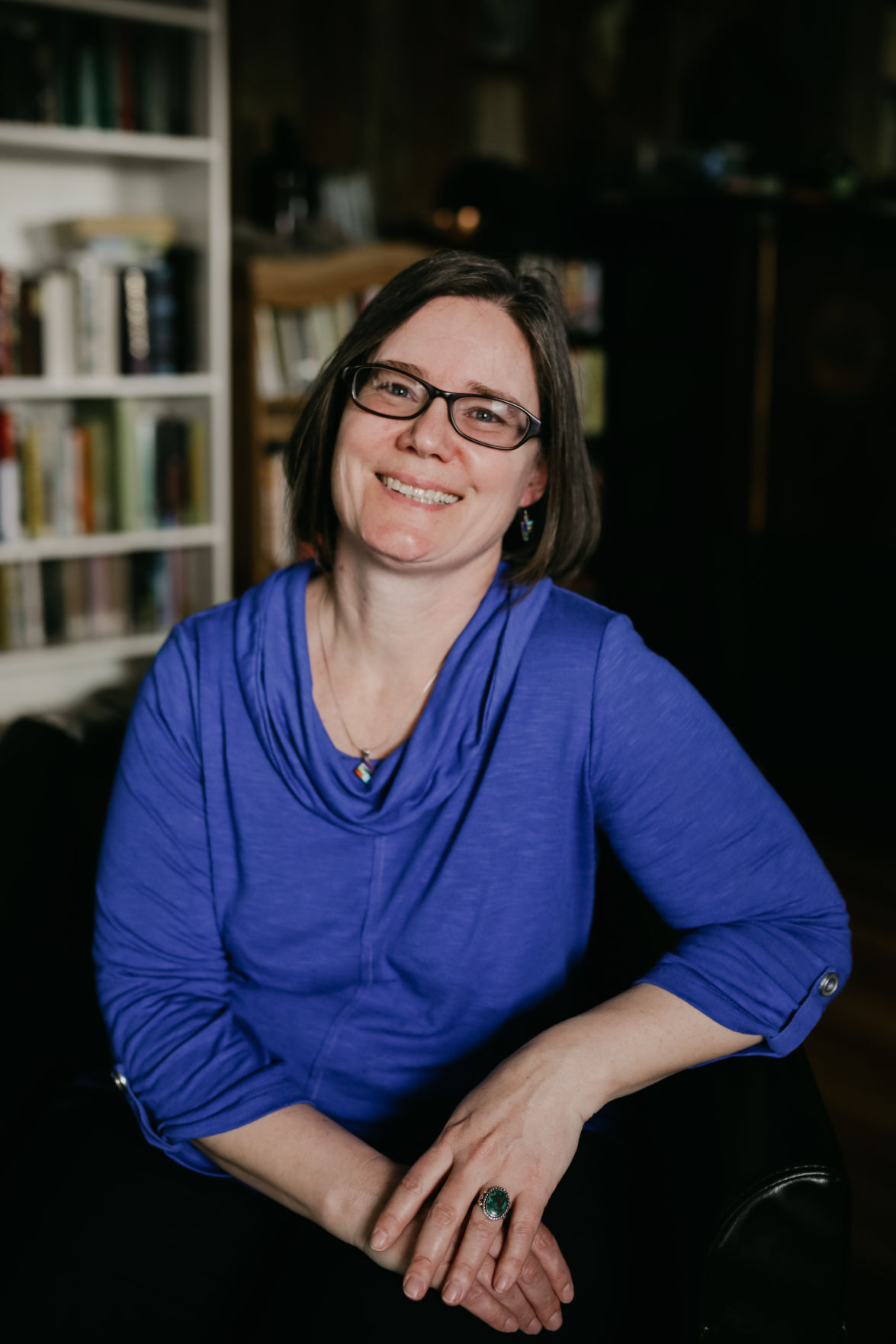 Yana Ludwig was the first person to announce a Senate run in the race to succeed Mike Enzi.

Two days after Wyoming’s Republican candidates for U.S. Senate took the stage in Sheridan to pitch their vision for the country’s future, Wyoming’s Democrats — on stage for their first televised debate this cycle — had their own opportunity to pitch their ambitions for America on Thursday night on the campus of Central Wyoming College in Riverton.

Focusing on policy planks of a brighter future for renewable energy, an expanded public health care option and a science-led approach to the COVID-19 crisis, the debate was an opportunity for candidates to coalesce against the contrasting vision offered by the state’s conservative candidate field, positioning the eventual winner for a policy clash with the Republican nominee ahead of the general election in November.

However, the 90-minute debate also offered an opportunity for the state’s voters to learn more about a diverse field of candidates ahead of one of the most competitive U.S. Senate races the party has produced this decade and, potentially, to define their party’s identity as they seek to build a campaign capable of bringing an end to its 50-year drought representing the state in the U.S. Senate.

The debate stage featured a wide spectrum of candidates, from a rare socialist candidate in Laramie’s Yana Ludwig to the University of Wyoming’s Merav Ben-David, who has pitched herself as a scientist in the public interest.

Also in the field was Jackson-based global affairs consultant Nathan Wendt and a pair of perennial candidates in Cheyenne’s Rex Wilde and Elk Mountain’s Kenneth Casner, both of whom ran unsuccessful campaigns for governor in 2018. Evansville’s James Kirk DeBrine also participated, despite calls from the state party for him to drop out of the race after he disparaged several of his female opponents on social media earlier this year.

Thursday’s debate tested candidates on their beliefs on topics including the removal of Confederate statues, campaign finance reform and access to the ballot, as well as their beliefs in how best to get America back to work. But it also allowed candidates to sell voters on the viability of their own brands of liberal politics in a race many see as a warm-up for a second-place finish come November.

For Ludwig, it was the belief that Wyomingites were actually ready for a true alternative to the conservative politics that have long defined the state, referring back to the past successes of progressive candidates like Bernie Sanders in the state’s Democratic caucuses. (Sanders came in second to former Vice Presidential Joe Biden this year, but only after dropping out of the race.)

For Casner and Wilde, it was the opportunity to bring a new type of leadership and change to a state they’ve lived in for decades.

Fearing the fallout from the COVID-19 pandemic and the escalation of the climate crisis, Ben-David said it was an opportunity to elect a scientist at one of the most critical times in world history. Wendt pitched himself as the perfect moderate, able to go to Washington and break the gridlock between an increasingly partisan Congress because of his loyalty to ideas rather than either party or their platforms.

“If you want to move the needle on these core issues that are unmovable, send a Wyoming Democrat,” he said.

That said, several of the candidates presented ambitious ideas well outside of the zeitgeist of mainstream Wyoming politics. Ben-David and Ludwig both weighed in on their support of a “Green New Deal” for America as an opportunity to not only spur economic development and create a post-fossil fuel economy in the places affected most by those changes, but to also cut emissions and address the existential threat posed to the planet by human-caused climate change.

Ludwig specifically endorsed a larger, 32-page document initially championed by Sanders on the presidential campaign trail that includes a massive public works component to combat climate change and put Americans to work. Ben-David — who stressed that initiatives like planting trees were not enough to reverse the planet’s shifting climate — endorsed other means to fight emissions, including the introduction of semi-nuclear reactors, as a way to raise revenues for Wyoming in a post-coal era while slashing emissions and minimizing nuclear waste.

Others, like Wendt, saw potential in the opportunities of existing resources like coal, building on the promises of a Green New Deal to invest in a national laboratory for carbon capture technologies, in a place like Campbell County, to create thousands of jobs while ensuring the continued viability of one of Wyoming’s most critical resources.

Beyond boilerplate issues like the candidates’ shared support for the Endangered Species Act, legalized marijuana and a general acceptance of statehood for places like the District of Columbia and Puerto Rico, the candidates also pitched a need to fundamentally alter aspects of American society that they say have constrained freedoms. Campaign finance reform was a key topic for many of the candidates, while American capitalism was seen by several candidates as in serious need of reform, albeit worth preserving.

While candidates like Ludwig spoke the most on the subject — advocating increased levels of local determinism in how tax revenues were distributed, for example, or the need for workers to have greater control over their workplace — most were in agreement that something fundamental at the core of the nation’s economy needs changing.

“The market was created to serve us, but now we live to serve the market,” Wendt said. “It shouldn’t be that way.”

Between the months of April and July, the former U.S. representative's campaign did some of its best fundraising yet, raising roughly $360,000 — or 22% of her total fundraising haul this cycle.

307 Politics: What an unusual straw poll says about Wyoming politics, and other news

The surprising results have some questioning the decision to hold and publicize the poll, which favored Bryan Miller over Cynthia Lummis.

In tweets, James Kirk DeBrine questioned the faith of a Jewish opponent and appeared to suggest that a candidate with multiple children would not be able to competently hold elected office.

307 Politics: Moving with the times

The Powder River Basin Resource Council intends to provide the “education, tools, and resources available for a planned transition to a new, diversified Wyoming economy” with its new series.

Attorneys argue that the size of Wyoming’s buffer zones provides a distinct disadvantage to political groups hoping to exercise their free speech and engage in the political process.

All six U.S. Senate candidates in the upcoming Wyoming Democratic primary took the stage Thursday night in Riverton for a debate.

Yana Ludwig was the first person to announce a Senate run in the race to succeed Mike Enzi. 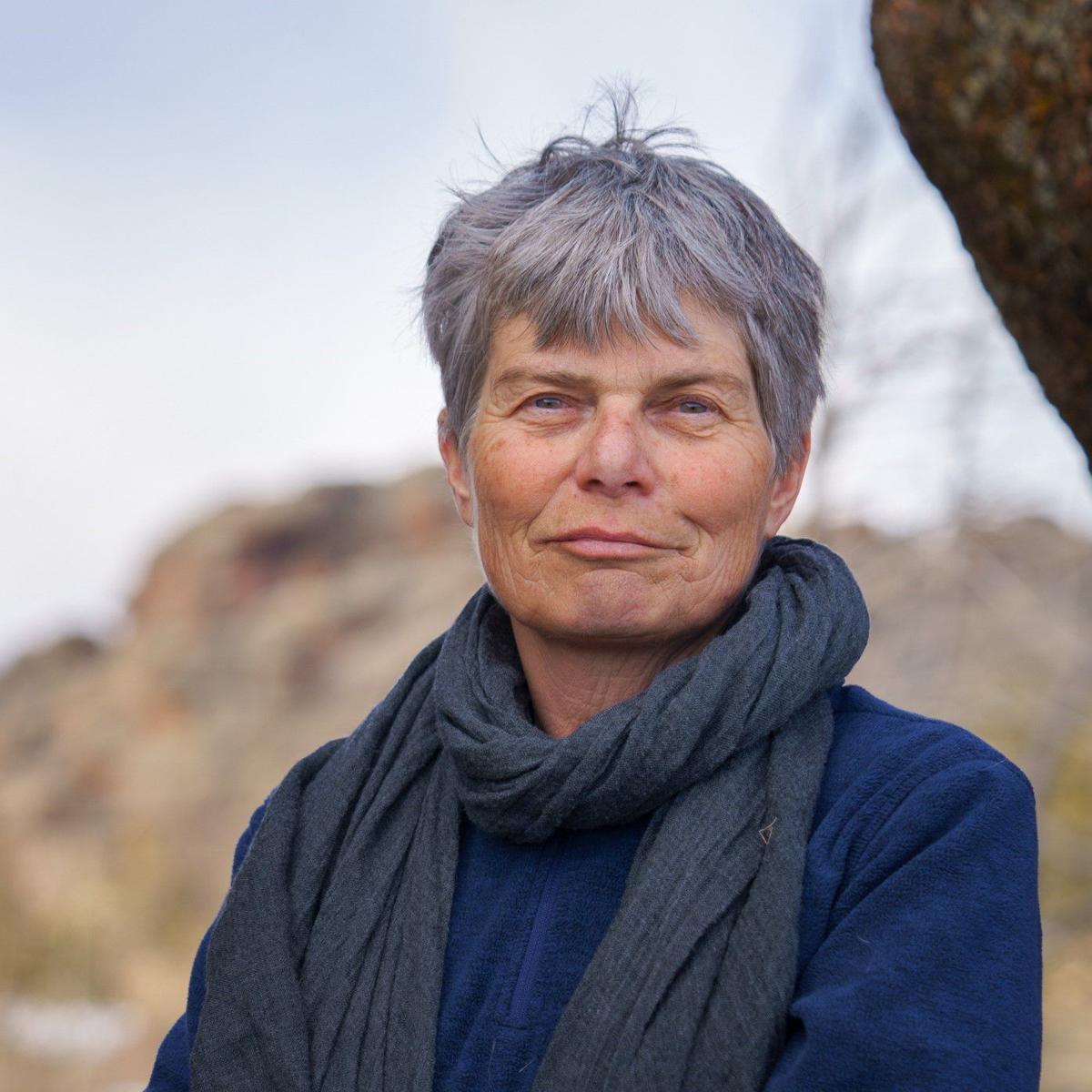 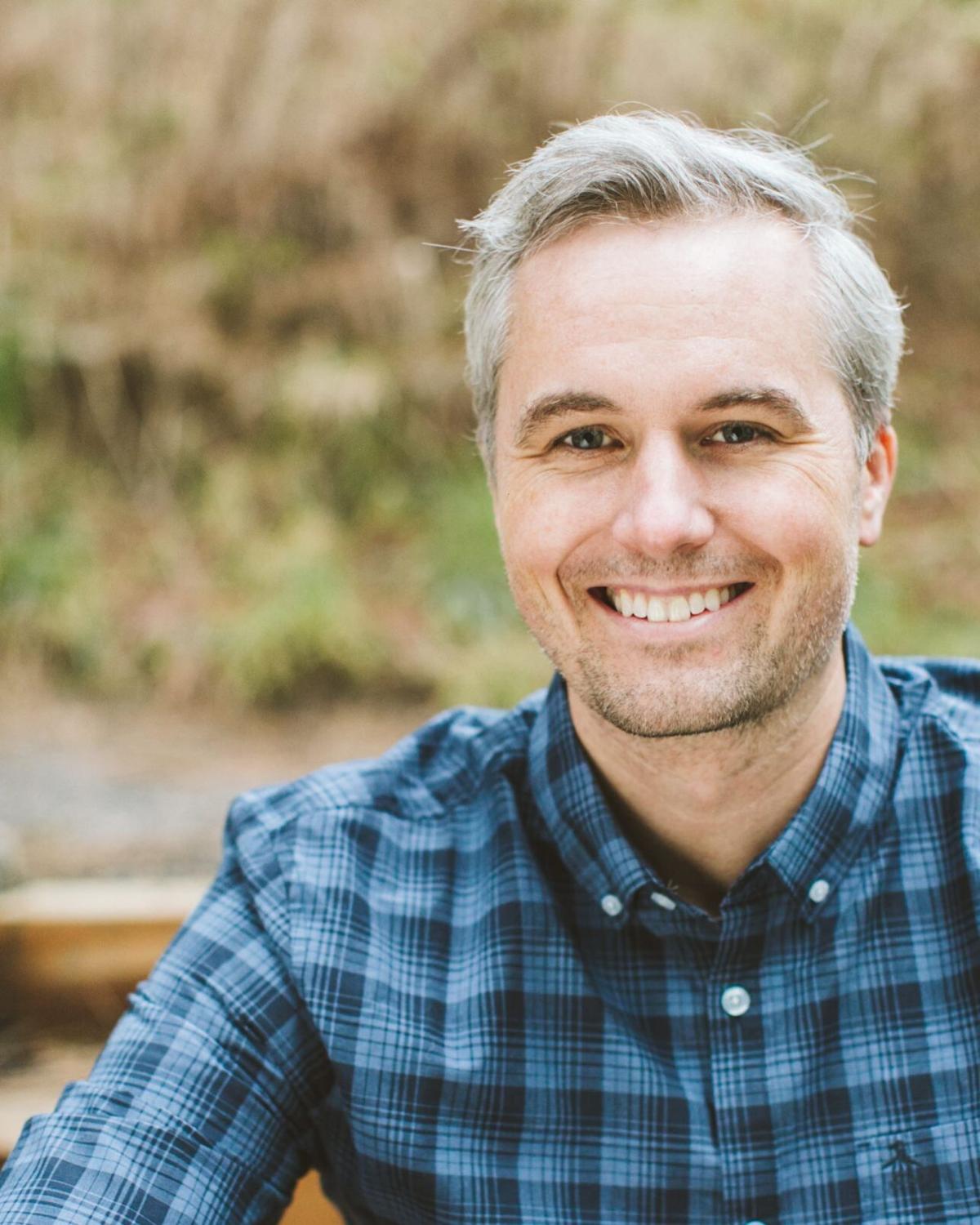