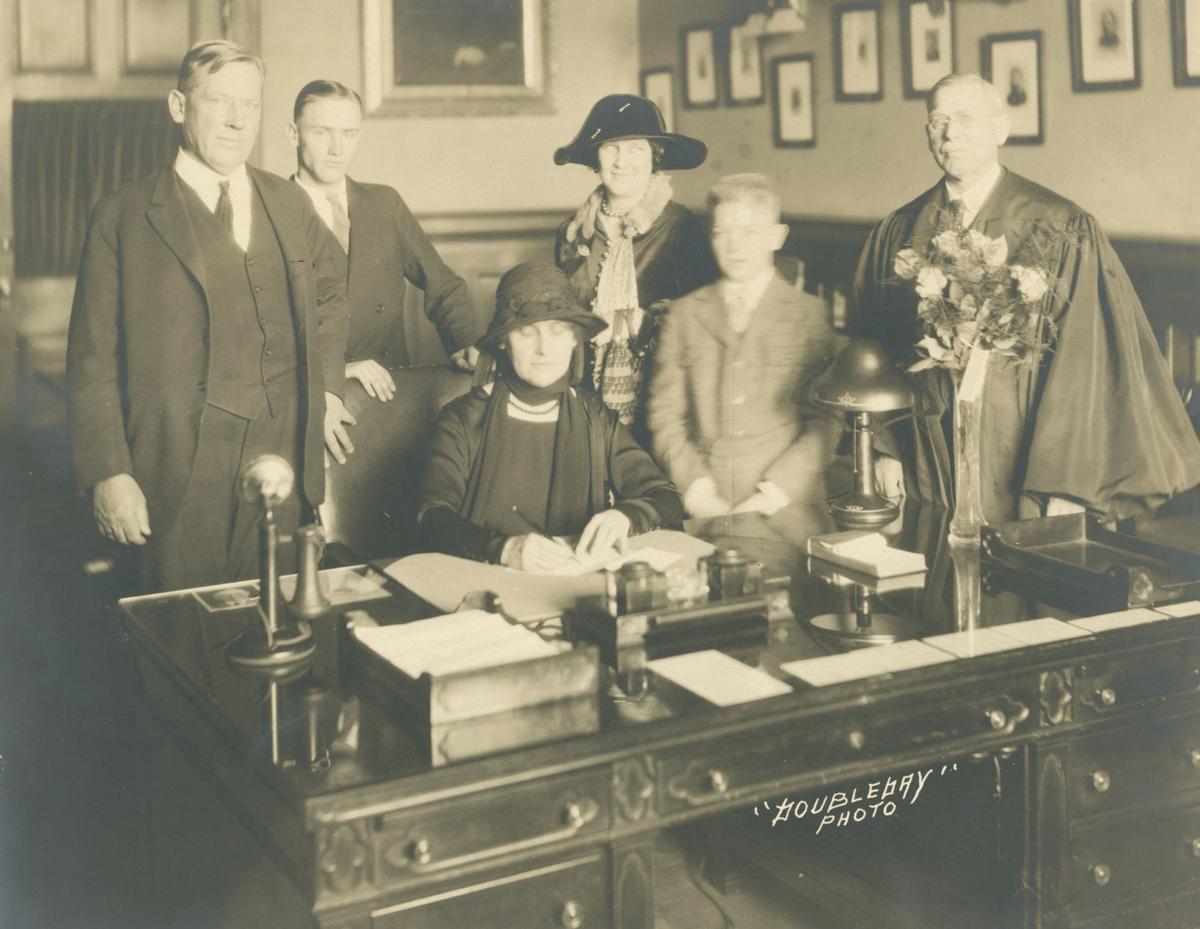 Nellie Tayloe Ross signs her oath of office in January 1925 to become the first woman governor in U.S. history. 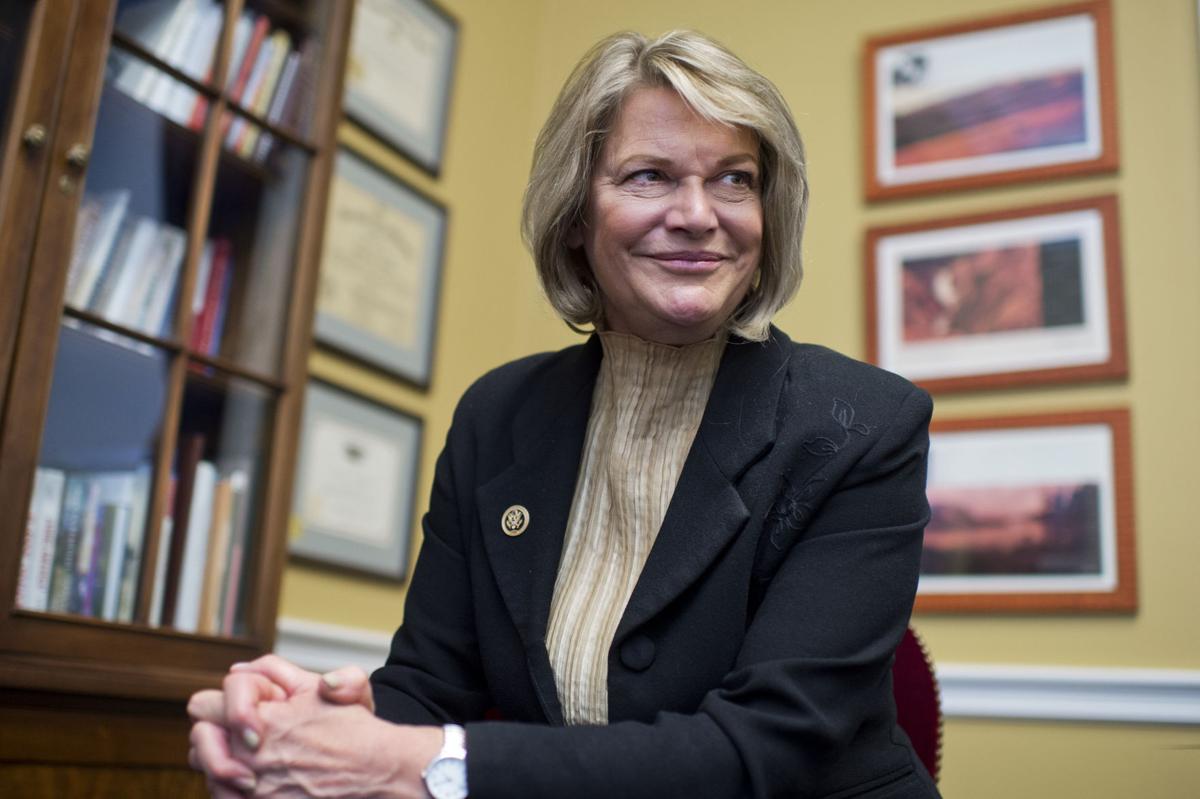 Former U.S. Rep. Cynthia Lummis is Wyoming's Republican nominee for Senate in 2020. She is also a former state lawmaker and treasurer. 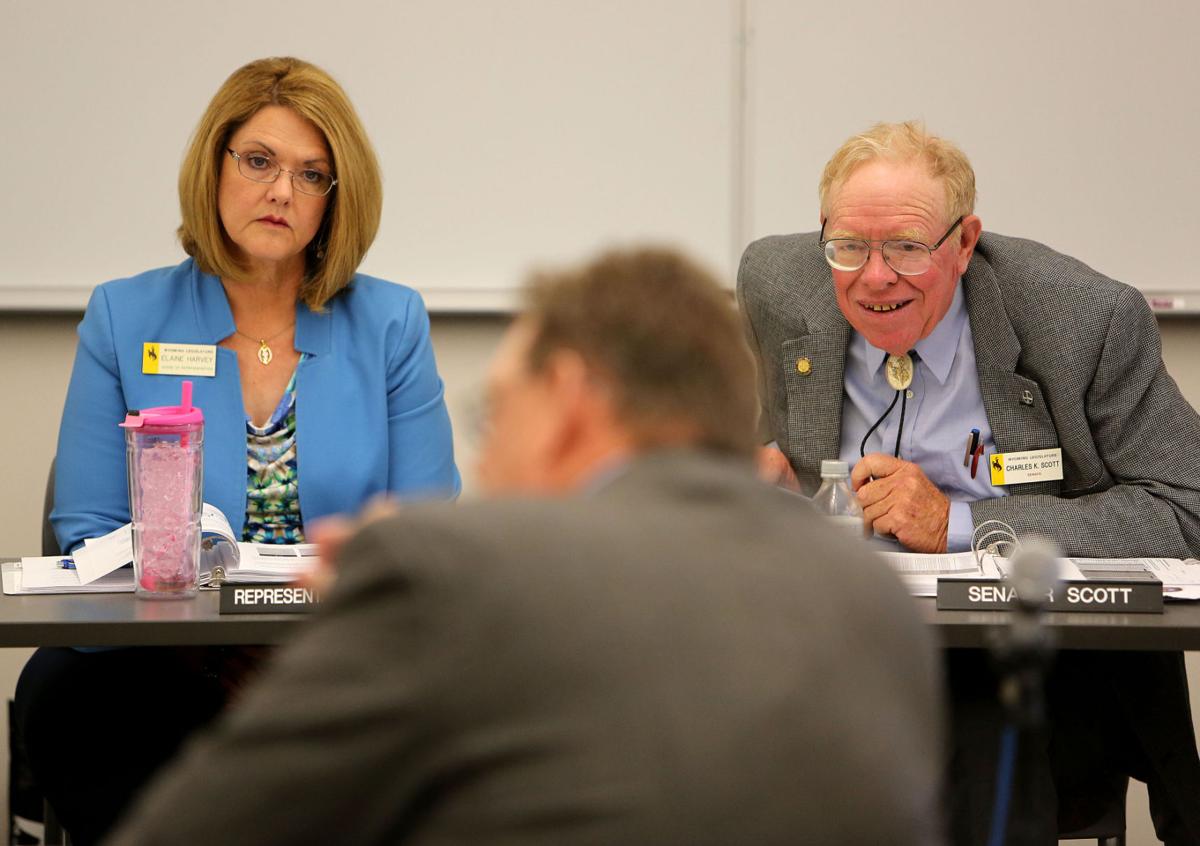 Nearly 148 years ago in Rochester, New York, suffragette Susan B. Anthony and 14 other women were arrested by local authorities for attempting to vote.

It was a bold act of defiance at a time when women across the United States were barred from casting ballots or holding public office. It would be another 47 years before the 19th Amendment granted women the right to vote.

In Wyoming, however, the situation was different. The then-territory established women's suffrage in 1869, three year's before Anthony's arrest.

“If she was in Wyoming,” U.S. Sen. Mike Enzi wrote last week after President Donald Trump pardoned Anthony on the 100th anniversary of the 19th Amendment. “This would not have been illegal.”

Wyoming prides itself on its legacy of justness and egalitarianism, not only for giving women the right to vote a half century before the rest of the nation, but in elevating women to positions of power. Wyoming women served as the nation’s first female justice of the peace, the first female bailiff, the first woman statewide official and the first female governor -- all achievements that helped cement the state’s legacy as “The Equality State.” Last December, the state celebrated that legacy as it marked the the 150th anniversary of women's suffrage here.

“I think back on all the women I’ve known in Wyoming that have broken ground, so many women who have made these opportunities available,” said former U.S. Rep. Cynthia Lummis, who on Tuesday earned the Republican nomination for Wyoming's soon-to-be-open Senate seat. “There are just so many women who have paved the way, that to have the opportunity to be the Republican Party's nominee for the U.S. Senate ... it’s a great honor, an indescribable honor.”

But Wyoming's legacy is an imperfect one. While Wyoming can claim the nation's first female governor, Nellie Tayloe Ross, it has not elected another woman to the post in the nearly 100 years since she left office. The state's citizen legislature – with just 14 women out of 90 lawmakers – remains one of the least representative legislative bodies in the nation. Until Lummis' victory, its Republican Party had never nominated a woman to the Senate.

Meanwhile, the number of women in the Wyoming Legislature could also increase. As of Tuesday’s elections, at least 14 women will serve in the Legislature next year. Another 13 are competing for seats in November.

It’s not a shift that took place in isolation. The number of Wyoming women in office has declined and, until a few years ago, seemed set to languish. That was until groups such as the Women’s Legislative Caucus began an effort to cultivate women in leadership and potentially propel them into public life.

“I wanted to run for the Legislature for years, but timing was a big factor for me,” said Riverton Republican Ember Oakley, who will be taking over for Rep. David Miller. “Two years ago he was going to retire and I wanted to run then, but then he said, ‘Two more years and I’m done.’ I believe anyone can serve their community in some way and from there, you find the best fit for your strengths and weaknesses. For me, that was the Wyoming Legislature.”

After years of women waiting for their chance, this year’s elections seemed to mark a turning point in that discussion.

“This election is the culmination of work that's been going on across the state in a nonpartisan way for years, which is exciting,” said Jen Simon, a senior policy adviser with the Equality State Policy Center and a co-founder of several women’s groups across the state, including the Wyoming Women’s Action Network and the nonpartisan Cowgirl Run Fund, a political action committee focused on electing women to statehouse seats. “There's been a much more direct and concerted effort in the last couple of years to elect more women and to amplify what they're doing, augment that voice and make clear that things have to be different for everyone’s benefit.”

The Equality State, for all the pride of its history, has a complicated relationship with that legacy. For every story of triumph and opportunity – Lummis winning her first statehouse election a year out of college, Reps. Rosie Berger and Cathy Connolly simultaneously serving as house majority and minority leader, respectively – there are examples of the state falling short. While Wyoming’s U.S. House seat has been occupied by women since the 1990s, it took 100 years before voters elected Barbara Cubin, who in 1994 became the state's first woman to hold elected federal office.

And although Wyoming appears poised to elect its first woman to the U.S. Senate this fall, more than half the country has already done so. And even as women make gains in the Legislature, the statehouse remains disproportionately male.

So what needs to change? Part of the change needing to happen is structural. The switch to single-member districts in the 1990s played a significant role in women’s decline in politics here. Wyoming's part-time citizen legislature, with its Spartan level of pay and benefits, makes it more difficult for women to hold office. Meanwhile, biases in areas like campaign finance and within the political parties themselves help put additional weight on the scale.

“You have gatekeepers within political parties, and they're responsible for a lot of recruitment,” said Simon. “If the recruitment strategy doesn't really envision women or people without a certain set of masculine characteristics, you might not have as good a pool of women in your recruiting class. If we can start to again change the donation patterns and change the recruitment patterns, we really can start to change our politics without putting all the onus on women, saying things like ‘Oh, you know, women need to be more politically ambitious.’”

Some areas of the state do that particularly well. This fall, the Wind River Indian Reservation will field three female candidates for office, with Rep. Andi Clifford, D-Fort Washakie, and Valaira Whiteman, a Republican, facing off in a competitive race for House District 33. This year’s biggest name, arguably, is Grey Bull, who said this year’s slate of candidates is representative of the values of both the Northern Arapaho and Eastern Shoshone tribes.

“On the Wind River Indian Reservation, it has become the norm for women to run for tribal office, so both the Eastern Shoshone and Northern Arapaho tribes have both benefited and become accustomed to strong women in leadership roles,” Grey Bull wrote in an email. “I think what you are seeing with Andi, Valaira, and myself is a natural extension of that into the state and federal arena. Bringing effective change to systemic and institutionalized racial bias has to come from the inside-out, it cannot be left to voices on the outside calling for change within.”

To the north in Big Horn County, four of House District 26's previous six representatives to the Wyoming Legislature have all been women, with the latest– Jamie Flitner – set to serve her third term this winter.

Her predecessor, Elaine Harvey, served in the position for more than a dozen years, after unseating a three-term incumbent with nearly 60 percent of the vote in the 2002 Republican primary. That victory, however, may never have happened: in an interview with the Star-Tribune last week, Harvey said she didn’t even want the job at first.

“Sylvia [Gams, a lawmaker from Big Horn County in the 1990s], myself, Jamie… we were all invited to run,” she said. “I lobbied for three years before coming home and saying, ‘We need new blood in there.’ I talked to several leaders in the community – men, actually – that I thought would be thoughtful and contribute a great deal to the Legislature. And after four or five turn-downs, several turned back and suggested that I run. I guess I just never considered myself qualified as a candidate, although I don’t know why I didn’t.”

For Harvey – who would later go on to become a co-founding member of the Wyoming Women’s Legislative Caucus – the factor holding her back was something generational. She used sandlot baseball as an example: When the call for a game goes out, the boys rush out the door with a bat and a glove while the girls, without a mitt and a glove, would stay behind with doubt on their minds, wondering whether they were good enough to compete on the same level.

To get them there, Harvey realized they needed the equipment: Her group began coordinating trainings and travelling to countries like Morocco to understand places where women played key roles in governance. They taught women to change the conversation and to take charge in the room, and to demonstrate their abilities whenever they could.

“Every conference that we held, there was always a plea to get involved, that ‘You are worthy; you are worth it, and you could be contributing member to your community,’” Harvey said. “It was all about giving women the opportunity to feel asked to step up, before the question of what they should get involved in.”

But a truly representative government, Simon said, cannot only be fought for: it needs to be a conscious and collaborative decision.

It turns out, the biggest factors in women stepping up to run come from support, enthusiasm and encouragement from within their own communities. That emerged as a common theme, Simon said, when talking to women who chose to run for office this cycle.

“They almost had to be ‘voluntold,’” said Simon. “Somebody had to come up to them and tell them to run for office. And that’s something that needs to happen. If you are not the candidate, you need to be on the lookout for women in your community who should be, and you need to marshal your resources and support them. You need to get on their committee, you need to raise money and you need to help them get this done. Because if women don’t run, women don’t win.”

Nellie Tayloe Ross signs her oath of office in January 1925 to become the first woman governor in U.S. history. 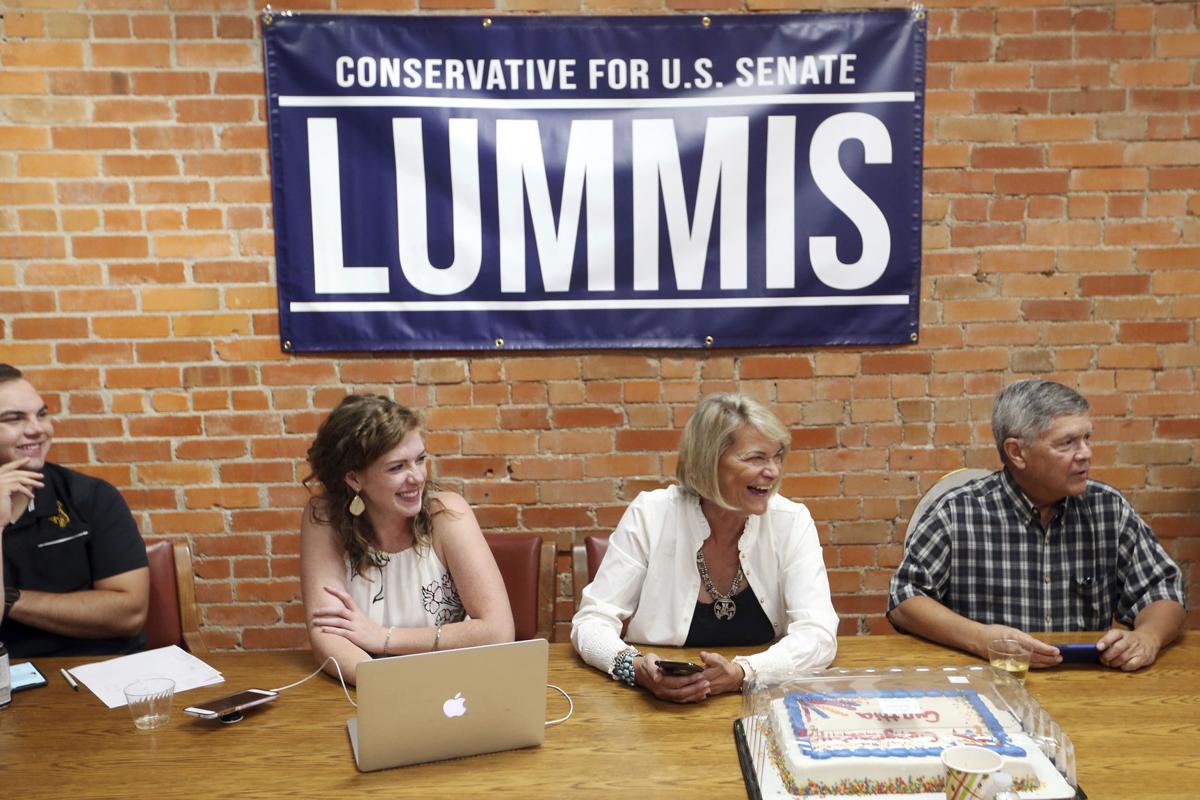 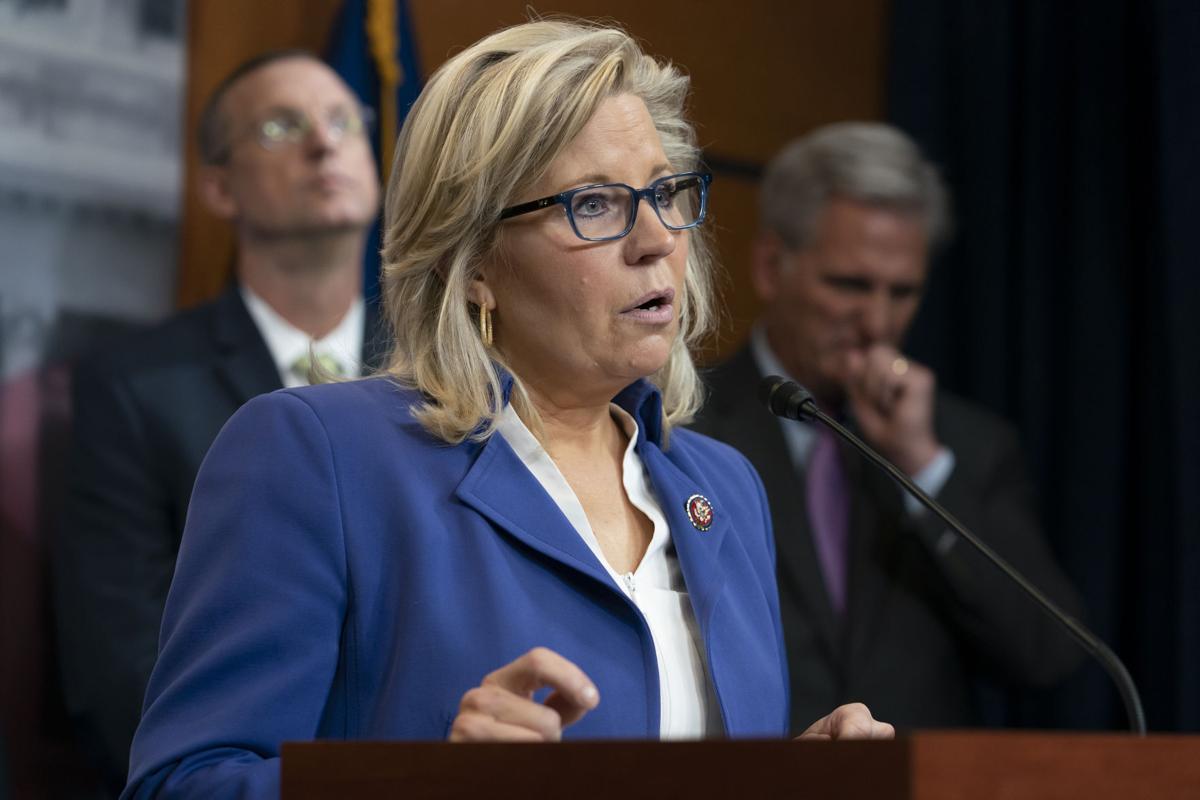 Rep. Liz Cheney has represented Wyoming in the U.S. House since 2017. She coasted to victory in Tuesday's primary. 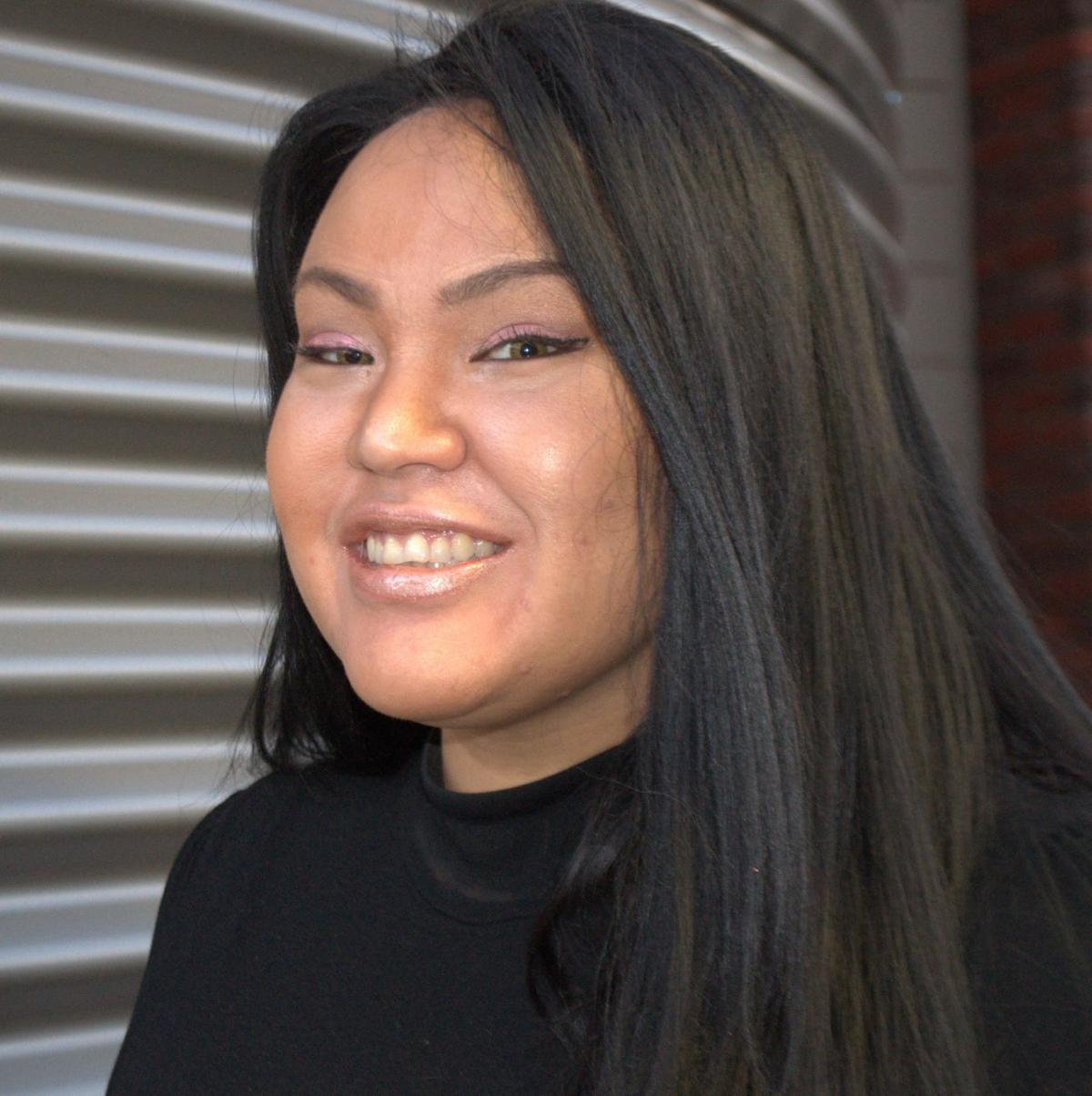 Lynnette Grey Bull won the Democratic nomination to challenge for Wyoming's U.S. House seat. If elected, she would become the first Native American from Wyoming to hold federal office.

Former U.S. Rep. Cynthia Lummis is Wyoming's Republican nominee for Senate in 2020. She is also a former state lawmaker and treasurer.