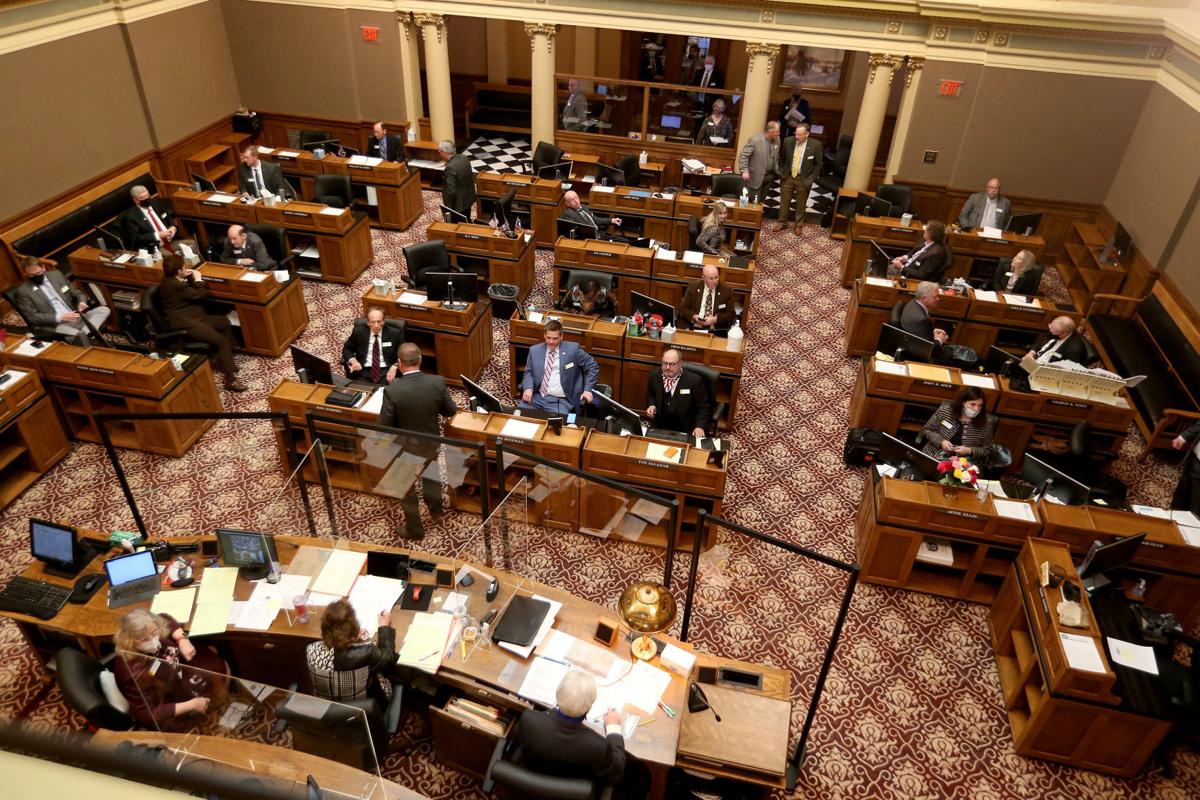 The Senate discusses a bill before voting March 1 during the first day of the 66th Wyoming Legislature inside the state Capitol. The Legislature came to a compromise this week over the state's supplemental budget. 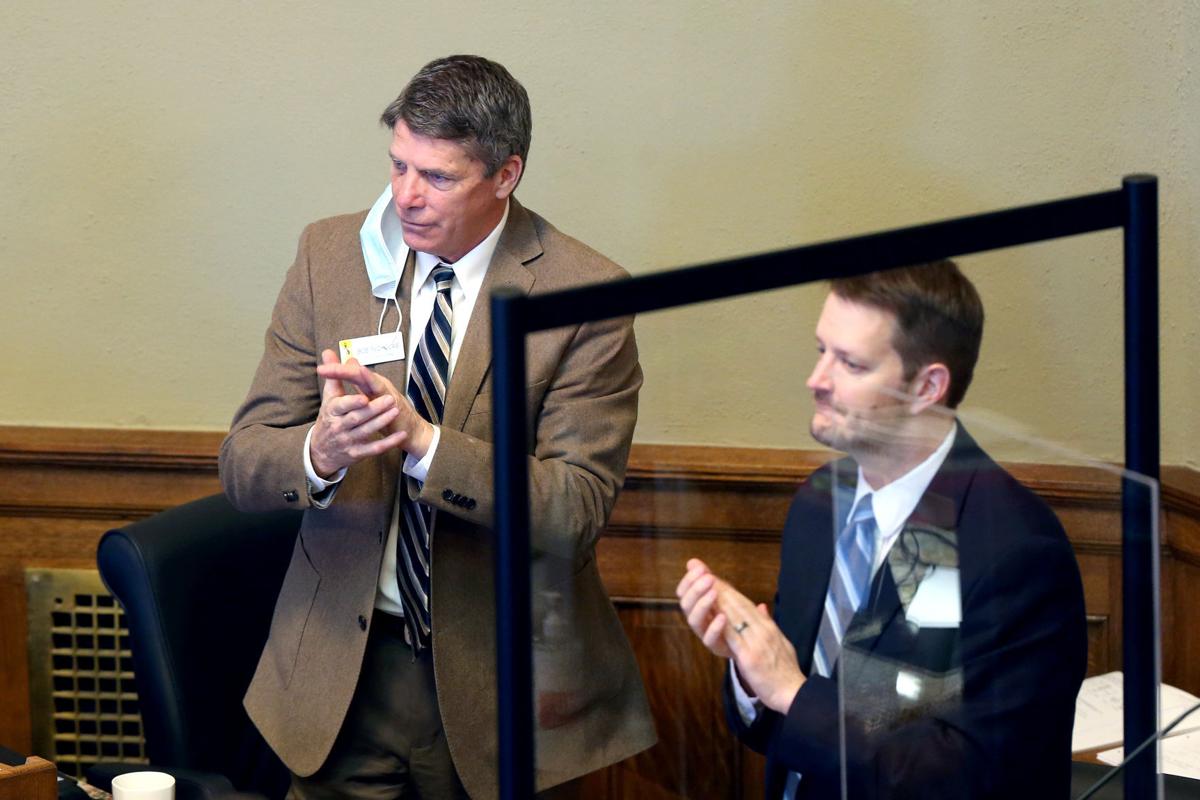 Rep. Bob Nicholas (left), R-Cheyenne, stands and applauds March 1 during the first day of the 66th Wyoming Legislature inside the state Capitol. Nicholas presented an overview of the supplemental budget finalized by joint conference committees on Monday.

CHEYENNE — Wyoming’s 66th Legislature began its final full week of the 2021 general session by agreeing on a supplemental budget.

The House and Senate voted to approve a version of the budget presented by the joint conference committee on Monday. The committee was composed of lawmakers from both the House and the Senate. They were tasked with finding a compromise on slightly different versions of the budget bill passed by the two chambers earlier this month.

On Monday, the Senate passed the joint conference committee budget report in a 26-3 vote, with one lawmaker excused. The House voted 57-4 to endorse the report, with one member excused.

It’s not a typical year for lawmakers to be debating the state’s budget, which operates on a two-year cycle. At the end of last year’s budget session, in March 2020, Wyoming lawmakers had approved a $2.97 billion general fund budget. But almost simultaneously, the pandemic reached Wyoming, the economy nearly tanked, and the governor made a series of budget cuts.

The Legislature was therefore tasked with passing an amended budget this session to carry the state through June 2022, the remainder of the biennium.

About two weeks ago, the House and Senate passed their own versions of the general appropriations bill, after making amendments. Both sides had received the identical budget bill to debate and amend. But only one version of the bill can become law.

So, in recent days, a joint conference committee has been attempting to find middle ground on two versions of the budget.

The resulting compromise, endorsed by a majority of members in both chambers on Monday, wound up looking pretty similar to the original mirror bill presented to the House and Senate by the joint appropriations committee.

According to Sen. Drew Perkins, R-Casper, the final supplemental budget reduces the general fund by roughly $430 million. (The general fund is made up of revenue from severance taxes, sales and use taxes, federal mineral royalties, and investment income. It funds a significant portion of government services and programs.)

House and Senate still at odds over amended budget

That means approximately 96% of budget cuts proposed in the first iteration of this year’s general appropriations bill were maintained in the final budget passed on Monday.

The difference in the two chambers’ recommendations largely came down to fund transfers, according to Perkins.

“One of the biggest issues that we had in this, if you remember our discussions, is we were not all that far apart on general fund and the (Strategic Investment Projects Account) appropriations,” Perkins said. “(But) we were substantially apart, about $160 million apart, on fund transfers.”

“Ultimately, we pretty much split the baby in a lot of respects on (the) general fund,” he continued.

Several of those compromises had to do with funding for health care and education.

For example, while the House initially voted to restore about $18 million in funding to the Department of Health and Department of Family Services, the Senate returned about $8 million.

The joint conference committee settled on restoring about $13 million to the Department of Health.

Why are Wyoming lawmakers talking about the budget again this year?

Instead of accepting the proposed cuts to higher education, the final budget gives both the University of Wyoming and community colleges additional funding, among other revisions.

In addition, both sides of the Legislature proposed to fund up to $10 million in matching grants for carbon capture projects. The Senate version of the amendment was adopted. The funding will come from the state’s rainy day account.

The committee also further revised a total of 10 amendments.

According to Senate and House leadership, the recent $1.9 trillion stimulus act passed by the federal government, expedited the committee’s ability to strike a deal over the budget.

Wyoming to receive over $1 billion from COVID-19 relief package

“(The budget) is done because, one, I don’t think our positions were that far apart,” House Speaker Eric Barlow, R-Gillette, said to reporters on Friday. “Then, there’s the second part of why that happened. And that’s the federal dollars actually made a difference.”

Wyoming’s budget has been chipped away at for several years. The Legislature has slashed the state’s general fund budget by roughly $1 billion since the 2015-2016 biennium budget.

Several House amendments made during the budget process to restore funding or positions to state agencies ended up not being adopted in the final report, including money for high-risk infant care.

Many lawmakers here have long advocated for a leaner government. Others worry the austerity measures will hurt already marginalized residents, especially as funding for essential public services disappear.

“These are real serious cuts,” Rep. Landon Brown, R-Cheyenne. “We’re cutting services, we’re cutting jobs; we’re taking money out of our economy that could be re-spent and we’re shoving money into savings.”

Suspect on the run in fatal shooting of 3 in Texas

Suspect on the run in fatal shooting of 3 in Texas

The Wyoming Senate passed the K-12 education funding bill with cuts but no revenue measures. The House now must vote to concur or reject the proposal.

The supplemental budget will carry Wyoming through June 2022 and includes approximately $430 million in cuts.

The Senate discusses a bill before voting March 1 during the first day of the 66th Wyoming Legislature inside the state Capitol. The Legislature came to a compromise this week over the state's supplemental budget.

Rep. Bob Nicholas (left), R-Cheyenne, stands and applauds March 1 during the first day of the 66th Wyoming Legislature inside the state Capitol. Nicholas presented an overview of the supplemental budget finalized by joint conference committees on Monday.