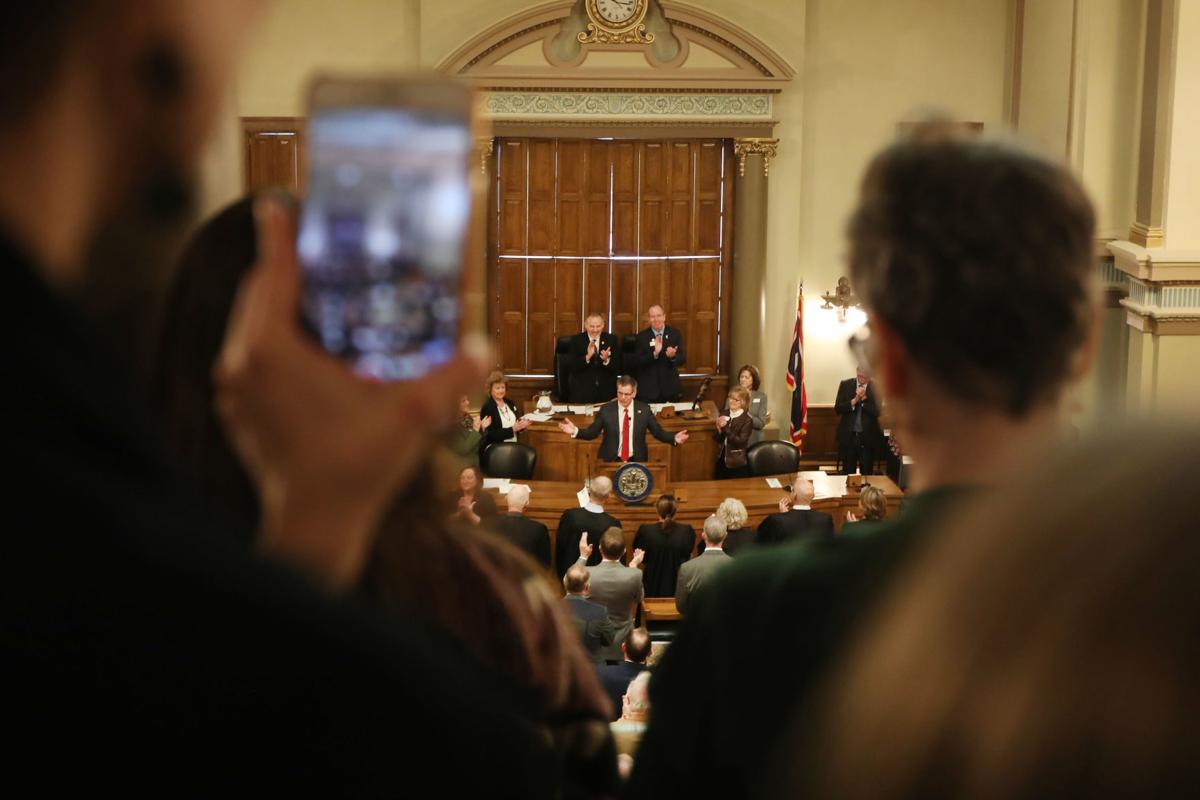 Gov. Mark Gordon takes to the podium amid standing applause to give the State of the State address Feb. 10 at the Capitol building in Cheyenne. The Legislature has voted to draft emergency bills to address the COVID-19 outbreak. 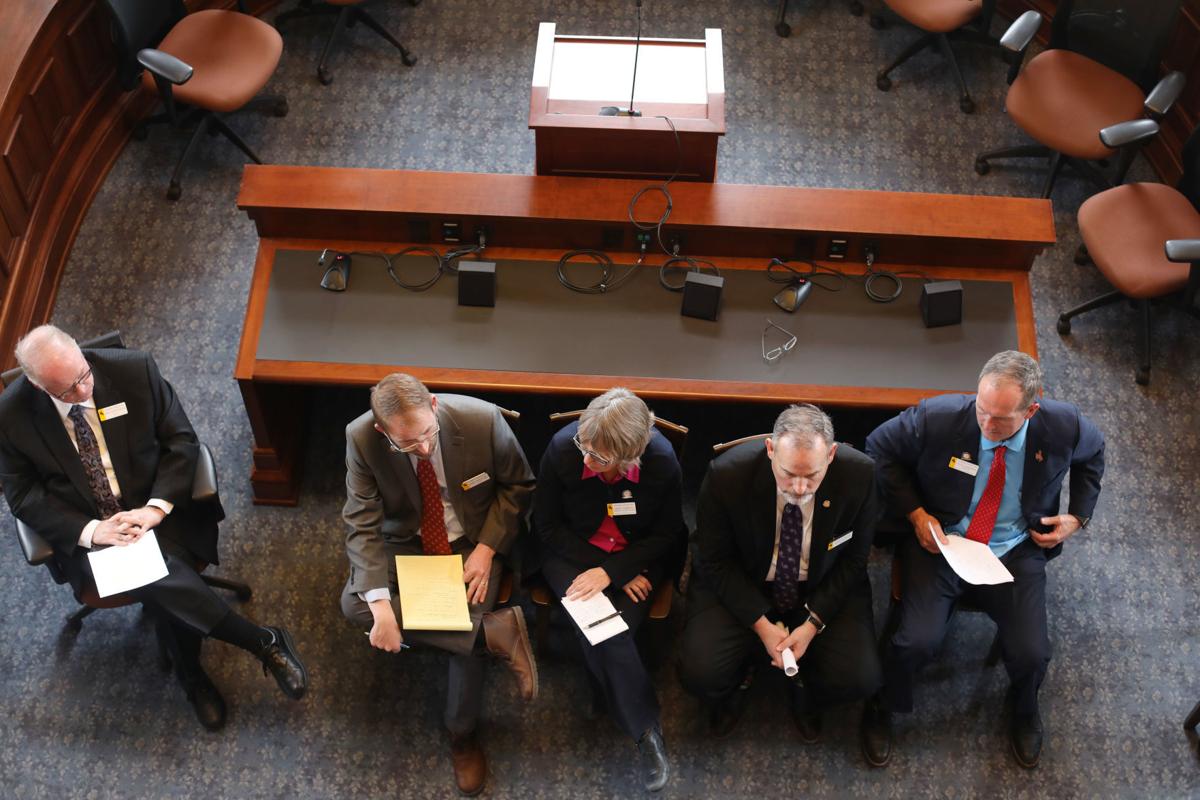 Leaders of the House and Senate gather in the Supreme Court Chamber at the Capitol in Cheyenne Feb. 10 for a briefing with the press.

Legislative leaders voted unanimously to pursue several pieces of emergency legislation on Thursday, all but guaranteeing the Wyoming Legislature will meet in its first special session since 2004.

In a conference call with Management Council on Thursday morning, Gov. Mark Gordon outlined a tentative agenda for state lawmakers in the coming months to begin to immediately stabilize the state’s economy – which is projected to experience revenue declines anywhere between $555 million and $2.8 billion due to COVID-19 and an overseas price war over oil – and begin the return to some semblance of normalcy.

That plan – which would be divided among the various legislative committees – includes the creation of several new programs as well as a number of potential changes to state statutes. The plan would address everything from small business and hospital funding mechanisms, moving to a mail-in ballot system and additional assistance for the state’s struggling oil and gas industry. It would also explore impacts to landlords and renters who, because of complications in financing programs under the federal coronavirus relief bill, have lacked a resolution that works for both sides.

Proposals could also include the completed construction of several key projects around the state like the Life Resource Center and the State Hospital – which could be supported by $1.25 billion in incoming aid from the federal government – emergency funding for hospitals and the creation of things like a work sharing program, a provision funded by the coronavirus relief bill that would allow workers with reduced hours to make up those wages with unemployment benefits.

Many of those recommendations, House Speaker Steve Harshman, R-Casper, said, could likely be addressed with a handful of uncomplicated, big-impact bills that could be introduced and passed in a one-day session in the coming weeks. More complicated, long-term fixes could be accomplished in a series of one-day sessions in the coming months, with the first likely focused on the key programs advocated for by the governor.

“The first list should be very narrow, limited to the items the governor talked about today,” Senate President Drew Perkins, R-Casper, said.

Those bills will likely be drafted in the coming weeks and distributed to the public before a special session is called and the bills are debated.

Gordon said he has begun looking at winding down several of his task forces created to address the impacts of the crisis in the coming weeks, noting his infrastructure and transportation task force has essentially “done its job” in ensuring truck traffic can continue through the state uninhibited. But other questions still remain: particularly, what reopening the economy actually looks like.

Gordon told lawmakers he has been in contact with governors in surrounding states to work with them in concert to craft a plan to “lift the economy up” without chancing another resurgence of the disease, building on comments made in a press conference Wednesday that any decision to reopen the economy would be based on data and would likely be gradual.

Much of this work, Gordon said, still depends on guidance from the federal government, which has yet to say how the $1.25 billion in aid can be spent.

The Legislature could meet in a special session as early as June to begin addressing COVID-19’s budget-related impacts to the state, Gordon said Thursday, though executive leadership is still waiting for more action from the federal government before rolling out any plans for mid-to-long range recovery.

While Gordon issued a directive to state agencies on Wednesday to begin finding reductions in their budgets, the ultimate implications for the state, and what actions the Legislature takes, could be defined by the amount of money coming from the federal government and the larger issues facing industries like oil and gas. While the dollars and cents impacts of the pandemic are still unknown, one thing is certain: the crisis has very likely fundamentally altered the state’s economy for months – if not years – into the future.

“Massive is the way I would tend to look at it,” Gordon said.

Twenty Wyoming nonprofits signed a letter to the governor and state auditor seeking the suspension, a group that included housing and homelessness advocacy organizations as well as the Wyoming Hospital Association and the Cheyenne Landlord Association.

Wyoming's unemployment fund is one of the nation's strongest. But maybe not as strong as thought

The latest: Coronavirus in Wyoming — April 16

The Star-Tribune will update this page throughout the day with the latest news regarding coronavirus in Wyoming.
307 Politics

The list, which was released by the Biden campaign Thursday morning, includes a number of current and former state lawmakers.

What does oil's negative price mean for Wyoming?

"Everybody in Wyoming should be concerned about this,” Gov. Mark Gordon said in a statement.

The decision leaves many states whose economies have effectively been shut down with major revenue shortfalls due to sales tax losses and diminished industrial activity.

The plans include money for hospital improvements, small business assistance and eviction protections for renters.

Cancellations and stymied business activity during the novel coronavirus pandemic have wreaked havoc on Casper's local economy. With low sales tax collections, the city is looking to cut more than $9 million in anticipated spending over the next year and a half.

Gov. Mark Gordon takes to the podium amid standing applause to give the State of the State address Feb. 10 at the Capitol building in Cheyenne. The Legislature has voted to draft emergency bills to address the COVID-19 outbreak.

Leaders of the House and Senate gather in the Supreme Court Chamber at the Capitol in Cheyenne Feb. 10 for a briefing with the press. 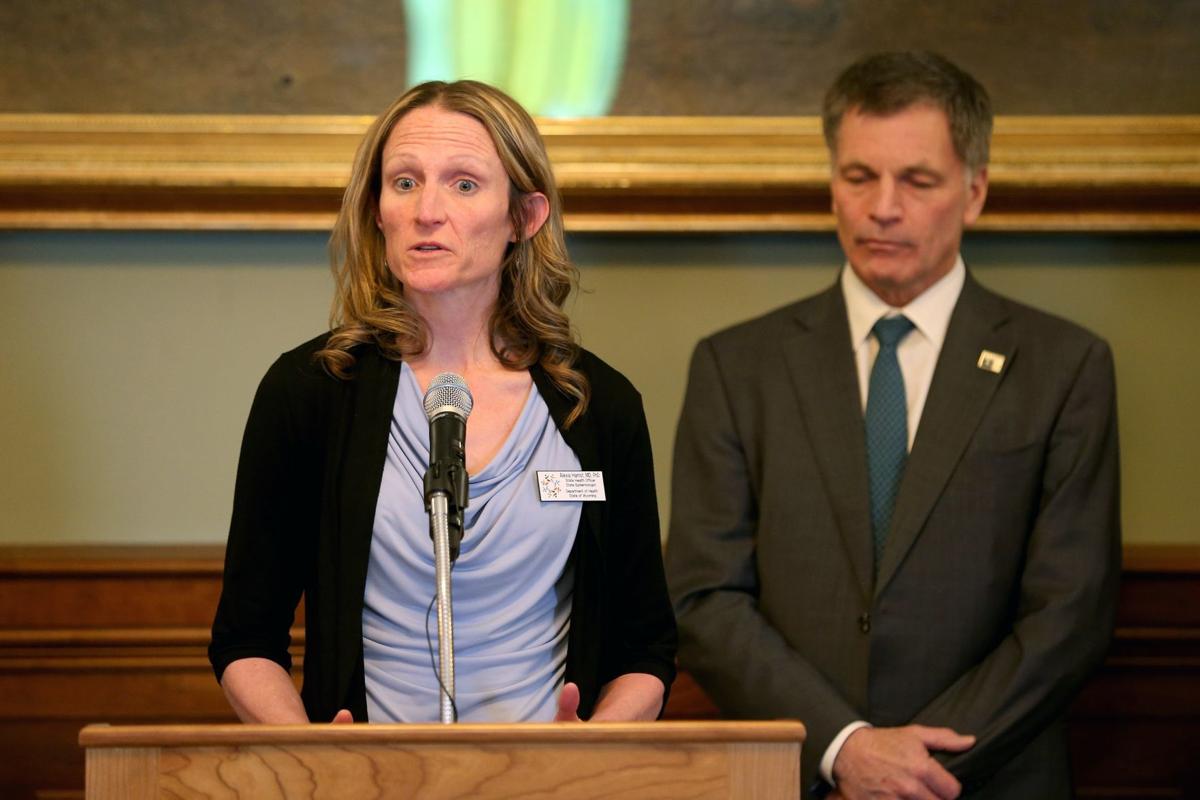 State Health Officer Dr. Alexia Harrist talks at a press conference in early March as Gov. Mark Gordon looks on. The Wyoming Department of Health announced the 1,000th case of the coronavirus Wednesday.