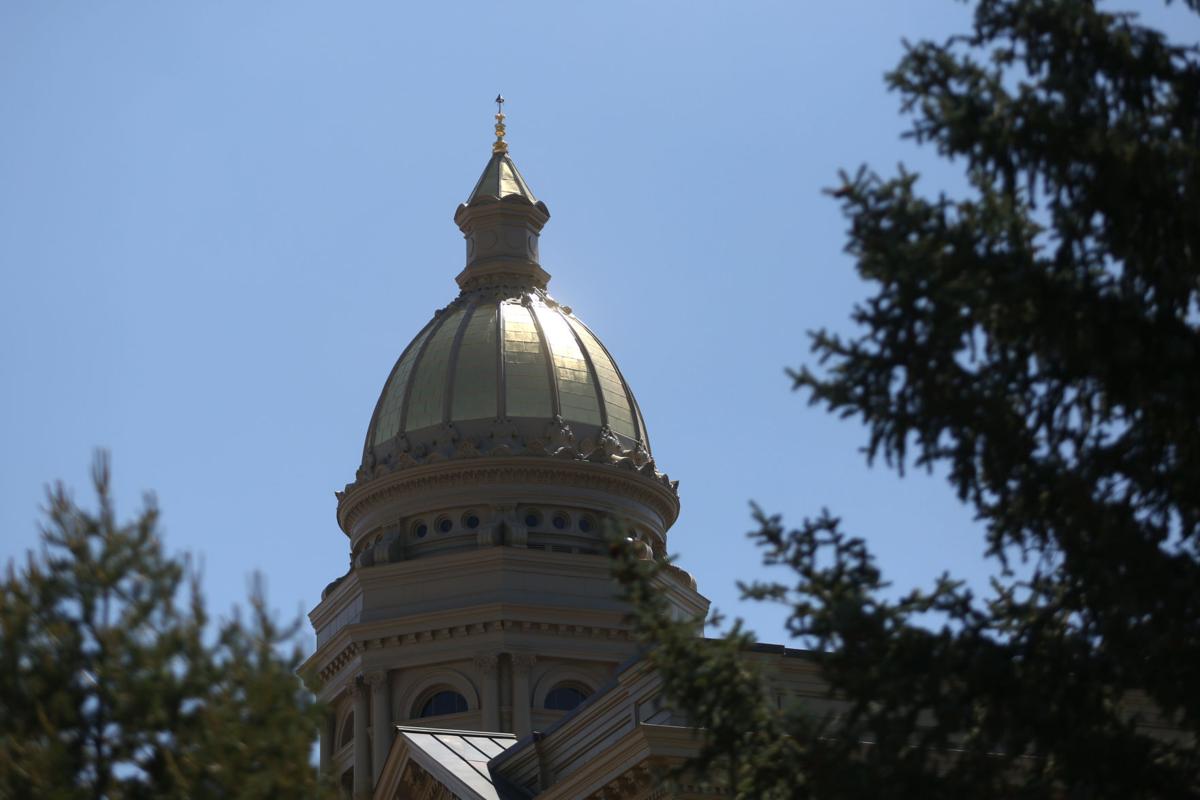 The roof of the Wyoming Capitol peeks through the trees July 10, 2019 in Cheyenne. 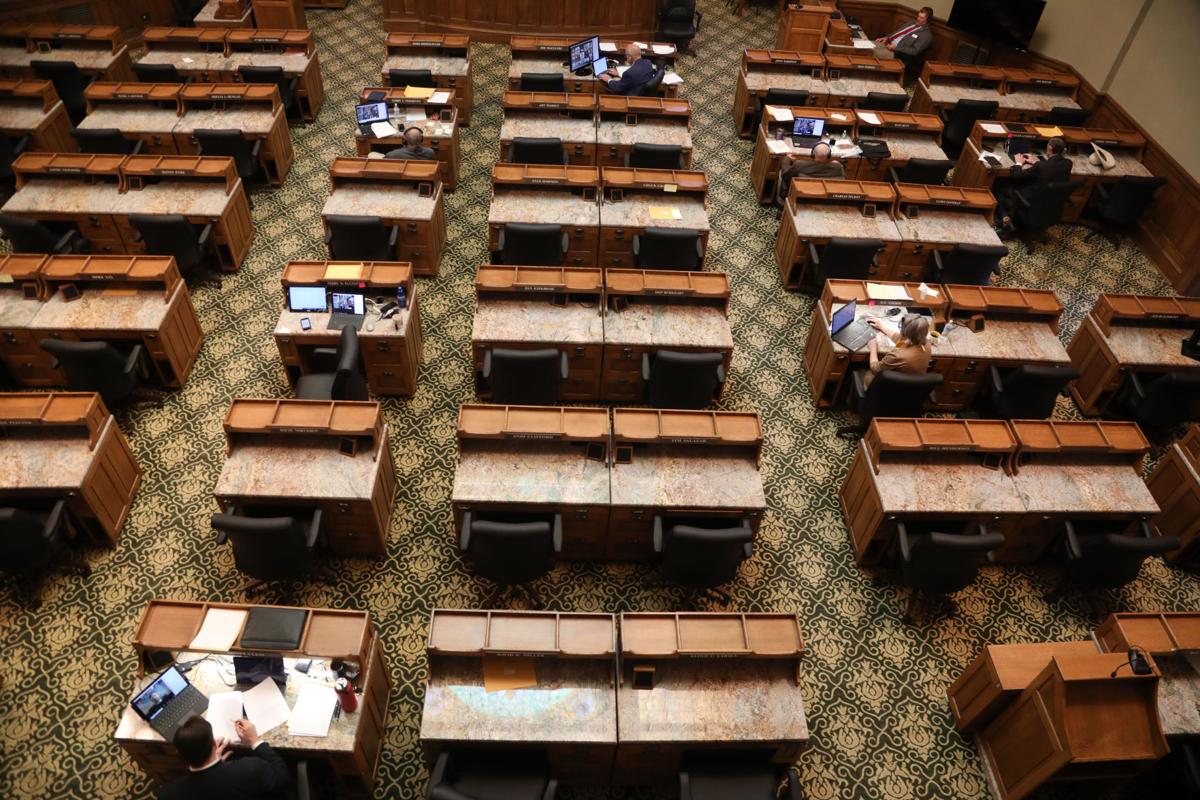 A limited number of representatives attend the special session in person at the House Chamber in the Capitol building in Cheyenne on May 15, 2020.

In an unexpected turn, there will not be a special legislative session in mid-July, Gov. Mark Gordon and statehouse leaders announced in a joint statement Friday.

Since the end of Wyoming’s formal legislative session in April, it was widely understood that there would be a special session this July, in large part to decide on how to distribute the latest round of federal relief money.

“I would’ve told you a week ago that we had to have it, and it was happening,” said Rep. Dan Zwonitzer, R-Cheyenne.

There is still a possibility that a session could happen later in the summer, but that doesn’t appear likely. Gordon and legislative leaders say relief spending decisions can be made through the normal budget process rather than in a lawmaking blitz.

“A product developed with months of deliberation will be significantly better than any legislation compiled in a few days of hearings and a week-long special session,” Senate President Dan Dockstader, R-Afton, said in a statement. “We can utilize our standard budget hearing and standing committee processes to allocate these funds in a conservative manner during the 2022 Budget Session.”

In order to hold a special session now, Wyoming’s Senate and House of Representatives would have to each vote and achieve a majority. The governor also has the ability to convene a special session.

“If it doesn’t happen in mid-July, I don’t think it’s likely there would be a special session,” said Matt Obrecht, director of the Legislative Services Office.

One of the most pressing topics the Legislature was expected to tackle in the special session was the distribution of money the state is getting from the American Rescue Plan Act. Lawmakers planned to discuss a broad range of issues tied to federal pandemic relief dollars during the July session.

No special session means a resolution to the state’s $300 million education funding shortfall won’t come soon. The House and Senate couldn’t agree on a bill to bridge that gap during the April session, leaving the issue unresolved. It’s unlikely lawmakers would have found a direct solution in July, but they had planned to rule on $120 million of the state’s more than $1 billion in relief money set to go to schools. That money can still be spent, but without legislative approval, the governor will be more limited in how.

While an overarching education bill was not a priority of the July session, some believed lawmakers would make progress on the issue.

“What’s unclear is will that (session) be simply the appropriation of these federal funds,” or will lawmakers attempt to address the larger deficit, Brian Farmer, director of the Wyoming School Board Association, told the Star-Tribune in April.

Gordon at that time said he felt the session should be solely dedicated to parsing out the federal aid.

Advocates also hoped a bill to expand Medicaid to more low-income adults in Wyoming — a proposal that for years has failed to garner enough support — would also be heard this summer.

The bill wasn’t guaranteed a hearing in July, but when the Joint Revenue Committee voted 9-5 to advance the legislation in early May, they added the caveat that it be considered either in the special session or the upcoming budget session in February.

If the governor wants to establish new programs with the incoming federal dollars, he would need the approval of the Legislature. But Gordon can act independently if he solely funnels the federal dollars into existing programs.

After Sept. 1, however, Gordon’s freedom and control over CARES money expands, at which point he can implement programs, according to Senate File 118.

Wyoming has received $534 million in American Rescue Plan money to date, with another $534 million anticipated to come next year. The state has until Dec. 31, 2026 to spend these funds, unlike CARES Act money that had to be spent by a much tighter deadline

“Governor Gordon expressed his commitment to a thoughtful, purposeful, transparent, and strategic approach to handling ARPA funds,” the statement said.

According to the announcement, the governor created a “strike team” to determine the areas that need the federal dollars funneled into them urgently and which ones to invest in long term.

“I still think it’s necessary to have some type of special session this summer to oversee federal financial distribution,” Zwonitzer said.

If they don’t squeeze in a special session this summer, lawmakers will have to wait until 2022 to convene in a budget session.

The bill would allow K-12 students to apply for waivers for vaccination requirements based on “personal objection” and forbid employers from requiring would-be employees to show proof of inoculation in most cases.

The roof of the Wyoming Capitol peeks through the trees July 10, 2019 in Cheyenne.

A limited number of representatives attend the special session in person at the House Chamber in the Capitol building in Cheyenne on May 15, 2020.