CHEYENNE – The clock in the Senate chamber stopped ticking last Monday morning – the 20th workday of the 2020 legislative session.

It seemed like the clock was stuck in a learned routine, ready to quit at the time it has grown accustomed to in its decades watching over the proceedings in the upper chamber. Normally, the 20th day – in a budget session – is the time to adjourn: a slow-moving coda to a high-speed, stressful affair that, at the end of the night, somehow always seems to end right on schedule.

Instead – because of a decision made by lawmakers last year to go four extra days this year – the session soldiered on, extending all the way into Thursday night.

By the end of the day Monday, most of the major battles had already been fought. A fight over the budget – drawn down to the wire the previous Friday – was reconciled in a list of recommendations to the governor left relatively unchanged from the budget that lawmakers began with, while the bills left to cover seemed all but decided.

Yet, with the luxury of time, further fights between the House and Senate continued unabated. A bill funding the state’s capital construction projects for the next two years went without a hearing until well into the final week of session, when deals were finally struck on a number of bills that had come to define this year’s conflicts between the House and Senate. Two distinct bills outlining the potential purchase of 5 million acres of land and mineral rights ended in a rather mundane compromise, a difference in opinion on dipping into the state’s rainy day fund settled on a $150 million cap and a guarantee to not hurt Wyoming’s credit rating.

A fight over school recalibration, and delving into the K-12 education system’s “basket of goods,” ended up in a vanilla bill lacking any of the provisions the Senate wanted, sold on the floor of the upper chamber Thursday night as a way for lawmakers to “keep a foot in the door” during recalibration discussions later this year.

Meanwhile, debates over the state’s $50 million capital construction bill and a $7 billion state budget – always big-ticket items in a budget session – eventually came to peaceful conclusions, with the final products closely resembling the positions the House and Senate arrived at prior to the session, the arguments largely revolving around philosophical points.

The end of another successful year.

As the final gavel fell on Thursday night, lawmakers left the capitol with dozens of new laws to their credit, passing everything from a new statewide gaming commission to major legislation regulating large-scale industrial solar installations. The Legislature even managed to pass a new tax through the House and Senate to help fund the state Department of Tourism, a significant achievement for a body that, for years, has been willing to exhaust any options beyond taxation to balance its budget.

“For our legislative session, we made significant and major steps forward in policy for the state of Wyoming,” Senate President Drew Perkins, R-Casper, told reporters late Thursday night.

However, state lawmakers left the building with the understanding that the state’s most fundamental problems – long-discussed and fretted over since the last bust in 2015 – will go unaddressed for another year. For some, another year might be one year too late, with a feeling among many members that the questions to be pondered this summer are ones that deserved answers much sooner.

On the heels of unprecedented coal bankruptcies in the Powder River Basin and in Kemmerer and a price war for oil that left the industry in panic, the Legislature responded to crisis with little urgency, taking little action to either cut spending or raise revenues in any meaningful way. Instead, the state redoubled its support of its longstanding, traditional revenue streams: minerals. Lawmakers passed numerous pieces of legislation to not only support the state’s coal industry, but to pursue even greater mineral production, chasing a massive land purchase from Occidental Petroleum some anticipate could be worth tens of millions of dollars in new revenues every year.

Add to that an unanticipated collapse in the price of oil last week and the unforeseeable impacts of a global coronavirus pandemic on the stock market, and some are unsure the state’s budget will even hold up for a number of months. Lawmakers such as Sen. Larry Hicks, R-Baggs – the presumptive chairman of the Senate Appropriations Committee next session – have suggested that the Legislature could very likely be reconvening in a special session later this year to rewrite the budget if current levels of economic downturn persist.

“If this had happened a month ago,” current Senate Appropriations Committee Chairman Eli Bebout, R-Riverton, said after oil prices fell below $30 a barrel Monday, “we might have had a whole different look on how we did things.”

Meanwhile, the state’s structural deficit – considered serious even before this year’s session began – could become even more dire, particularly as the state struggles to identify new areas to cut spending or broker solutions to finance other functions of government, like health insurance for state employees, without imposing a barrier to attracting talent. Though education funding would be an obvious target under future budgets, Gov. Mark Gordon vetoed a number of small, across-the-board reductions in spending and government staffing on Thursday night, saying that any cuts made would have to be methodical and programmatic.

While some progress was made – the passage of the first, true tax increase in years among them – the Legislature now enters an interim legislative session at a pivotal point in the state’s history, lacking much impetus to change course. Adding to the fire, the members of the 65th Wyoming Legislature now enter an election year, where political capital to make unpopular decisions – new taxes, major reforms, etc. – will likely be in short supply.

“Yes, we saw a few new taxes go through this year,” Rep. Landon Brown, R-Cheyenne, said in an interview Friday morning, noting the passage of a new lodging tax and the successful passage – and subsequent veto of – a new $5 surcharge on vehicle registrations in the budget bill. “I think there were plenty of attempts, and I think they were closer than ever before, but we’re in an election year. Nobody who plans on returning wants to go back to their constituents and say ‘I’ve raised taxes, now vote me back in – I want to do it again.’ I think that’s exactly what you saw.”

However, members of both chambers are beginning to come into agreement that some things will ultimately need to change. And while the policy decisions made by lawmakers this year didn’t offer any wholesale solutions to the looming fiscal crises ahead, they did offer some indication that the dialogue around the state’s future could finally be turning a corner.

Yet, at the same time, the Legislature did all it could to exhaust the remaining options it had to bolster the status quo for the state’s oil, gas and coal industries – which still remain the most critical sectors in the state’s economy. Severance tax breaks for oil and gas were passed, and tens of millions of dollars in spending and tax exemptions for coal – as well as legislation intended to help support the state’s first-in-the-nation carbon sequestration policy for coal-fired power plants.

“There’s a lot of jobs at stake,” Sen. Charlie Scott, R-Casper, said in an interview Thursday. “And the experts are increasingly thinking that they’ll need some of those [coal] plants for stability in the grid. It’s a stable power source to keep the grid going when the wind isn’t blowing and the sun isn’t shining.”

Those successes, however, cannot simply be seen as answers to the state’s problems. If anything, they may have simply helped to buy the state some time.

“Yes, some work was done,” said Cindy Delancey, the president of the Wyoming Business Alliance and a board member of Power Wyoming, a Gordon-appointed group focused on educating the citizens of Wyoming about the state’s tax structure. “But I think there is still more to come, and I’m just encouraging our elected officials to look to the future and maximize our options while we still have resources. Because once our resources are depleted, our options become that much more limited. From a business perspective, it feels like now is the time to have these conversations.”

But those conversations won’t be easy: On the morning oil prices collapsed and fears over pandemic in the United States truly exploded, Perkins seemed to foreshadow the struggle ahead as he offered his usual quote of the day – courtesy of former President Woodrow Wilson – to his fellow senators Monday morning.

“If you want to make enemies, try and change something,” Perkins said. “Said another way, I guess, the only thing people hate more than the way things are is change.”

The change is not anticipated to interfere with any of the traditional functions of the caucus itself.

The legislation would create criminal penalties for doctors and parents who decline to provide life-saving care to aborted infants born alive.

307 Politics: The legislative session is over. So what happens now?

The 2020 budget session was considered pivotal for Wyoming's future. What happens after an election this year?

Wyoming’s political parties have to grapple with a question going beyond who to vote for: how to run a caucus when nobody can get together in person.

“Do you bail on all the work that’s been done because the timing is weird?” Wallesch said of announcing her campaign during a pandemic. “Or do you say ‘You know, we’re asking people to have faith in you as a leader, so you have to show up in this moment, even if it’s not the way we planned to do it’?”

“The 32,000+ employees that comprise Wyoming’s hospitality and tourism industry are under extreme duress right now,” the executive director of the Wyoming Lodging and Restaurant Association said.

"This bill will harm people it never intended to harm - parents who want a child, but have received the devastating news that their pregnancy is not viable," the governor wrote. 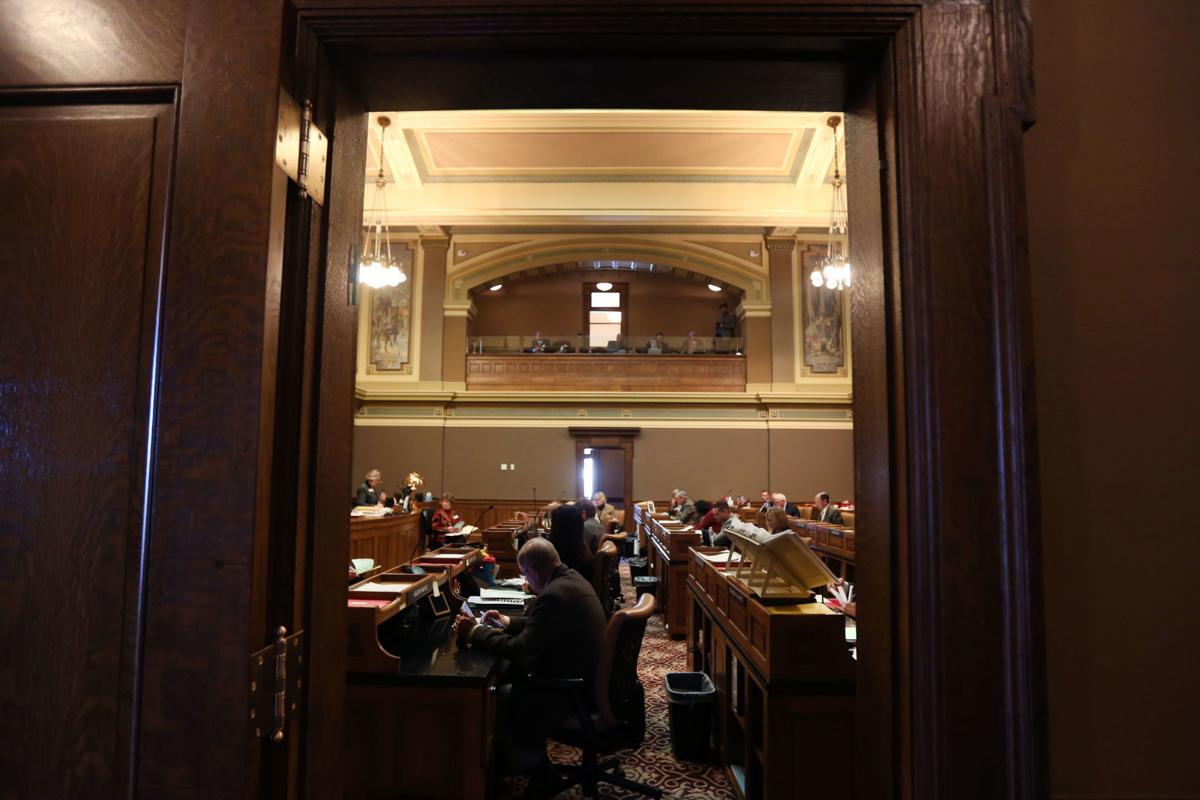 Senators work early in the 2020 Legislative session in Cheyenne. While lawmakers passed many bills, some of the state's biggest challenges remain unresolved. 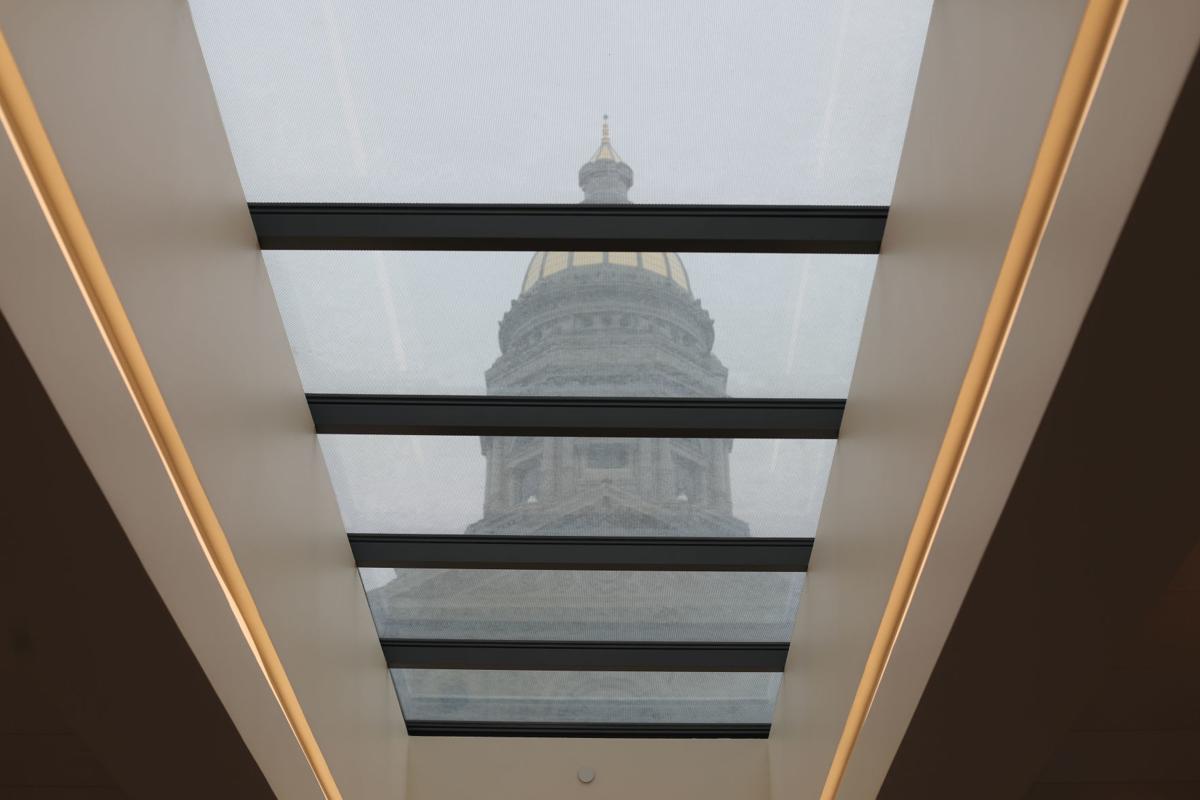 The Capitol rotunda is seen through skylights in the extension building on Feb. 10 in Cheyenne. During the just completed session, lawmakers adopted a budget and passed legislation that will allow the state to explore a massive land purchase.