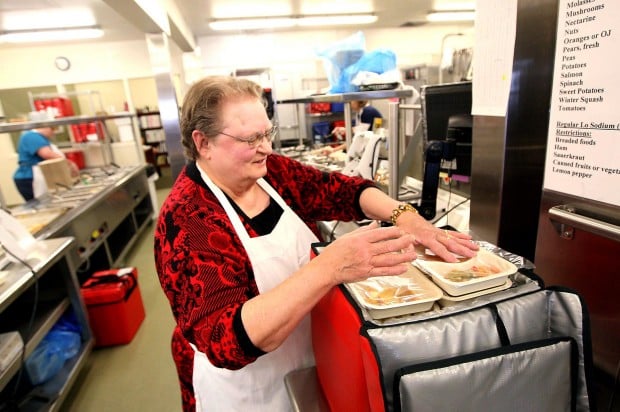 Norma Wolff packs hot meals at Meals on Wheels in March 2009 in Casper. A White House state-by-state ‘sequester’ impact report issued Monday said $205,000 in nutrition assistance programs for seniors in Wyoming would be on the chopping block. 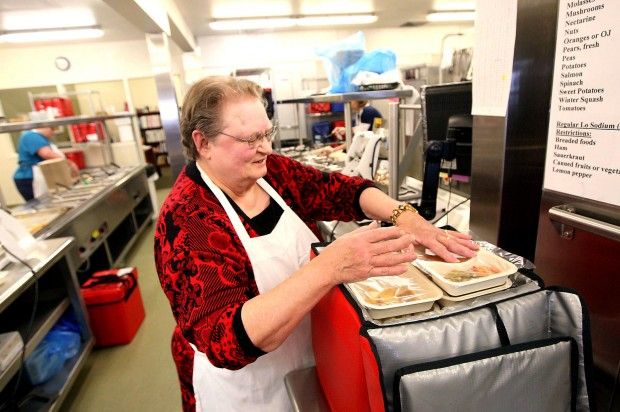 In an 11th-hour effort to avert automatic across-the-board federal budget cuts, the Obama administration released a state-by-state impact report on the $1.2 trillion “sequester” that has state officials scratching their heads.

The report issued Monday charges that the military and national parks are not the only agencies at risk in Wyoming. Funding for education, public health and programs for disadvantaged children in the state will take hits if the cuts go into effect, according to the report.

The impact report continues the blame game between the president and Republican leaders. The White House claims Republicans are forcing “children, seniors, troops, military families and the entire middle class to bear the burden of deficit reduction.”

The White House says it has a plan that would prevent the sequester from taking place March 1. It would reduce the deficit by $1.8 trillion in 10 years by chopping billions in discretionary funds and health care spending from the federal budget while closing more than $500 billion in tax loopholes for wealthy individuals and corporations. But the GOP refuses to raise taxes and wants to see deeper cuts than what’s outlined in the president’s plan.

Even though the White House released figures, state agencies are still unsure how much money will be cut if the sequester kicks in.

The Wyoming Department of Workforce Services has heard an array of numbers in the past couple of months, director Joan Evans said.

Even after seeing the White House numbers, Evans remained unsure.

“The numbers change frequently,” she said. “We won’t have much notice.”

Next to the military, the state Department of Education would take the biggest hit. More than $1.5 million in funding for teachers, aides and staff who help children with disabilities would be at risk. The cuts also threaten an additional $1.1 million for 20 teacher and aide jobs in the state.

“We’re as curious as anyone about the effects of this,” he said. “We’re in the same quandary as anyone applying for federal funding.”

Just because the White House outlines specific numbers, that doesn’t mean those are the cuts that have to be made, Rose said.

“This report is far from the last hand to be played,” he said. “Once we receive final directives and amounts, then it’s incumbent on our part to figure out the best way to mitigate the impact.”

The report said the Wyoming Department of Health would lose $352,000 for pandemics and natural disasters and $170,000 for substance abuse programs that help treat about 600 people per year. The White House also said a $38,000 loss in funding for free HIV tests would result in 1,000 less tests per year. Another $16,000 for childhood vaccinations would be lost, according to the report.

The health department doesn’t have specifics on the effects of the sequester, public information officer Kim Deti said in a statement to the Star-Tribune.

“Should this occur, as always, we will work to make the most of the funding we do have to minimize the effects on the clients of these programs,” she said.

The report also claims that $205,000 in nutrition assistance programs for seniors and $36,000 for law enforcement would go by the wayside.

The federal agencies in Wyoming are facing the same dilemma as statewide departments.

Hogan said the cuts could significantly reduce the amount of habitat the Fish and Wildlife Service is able to maintain.

For every dollar the service receives in federal funding, it gets more than $4 in return from other agencies and private donors, Hogan said.

“That’s where we will see the biggest impact,” he said.

The spending cuts could also limit the number of on-shore drilling permits issued to the Fish and Wildlife Service, spokesman Chris Tollefson said. The sequester could delay more than 300 permits for oil and gas leases, leaving Wyoming with less revenue from mineral royalties, he said.

The report also outlines a loss of $1.1 million in Environmental Protection Agency funding to help to “ensure clean water and air quality as well as pollution from pesticides and hazardous waste” in Wyoming.

“Unfortunately we’re not able to break down the numbers any further,” Andra Belknap, an EPA press secretary in Washington, said in a statement to the Star-Tribune.

Gov. Matt Mead believes the sequester will occur and is cognizant of its potential impacts, said Renny MacKay, Mead’s spokesman, in a statement to the Star-Tribune.

“The Governor’s focus is making sure that state government is run efficiently and has its fiscal house in order,” MacKay said. “State agencies have been preparing for necessary state budget cuts for the better part of a year so that the impact when the state spending reductions take effect on July 1st are minimized as much as possible.”

The Wyoming Democrats will be the 17th state party to unionize.

What happened to free airport parking in Wyoming?

Quietly, just before the pandemic panic of March 2020, free airport parking in Wyoming was taken away.

Banishing Cheney from the House Republican organization would threaten an end to her committee assignments. It would also deny her other normally routine privileges such as attending closed-door Republican strategy meetings.

A public ceremony to commemorate the life of former U.S. Sen. Mike Enzi will be held Aug. 6 at the Gillette College Pronghorn Center.

The Wyoming Department of Education has applied for a federal grant that would provide $9 million over five years for school districts in Evanston, Rock Springs and Rawlins to pilot a teletherapy program.

The public memorial is set for Aug. 6 in Gillette at 1 p.m.

Gov. Gordon announced Thursday that Wyoming has joined 24 other states in filing an amicus brief before the U.S. Supreme Court, arguing that states should be left to regulate elective abortions.

Does Wyoming have a hate-crimes law? It depends who you ask.

Wyoming is widely regarded as one of the last states without a hate crime law, but that assertion is not as straightforward as one might think.

Norma Wolff packs hot meals at Meals on Wheels in March 2009 in Casper. A White House state-by-state ‘sequester’ impact report issued Monday said $205,000 in nutrition assistance programs for seniors in Wyoming would be on the chopping block.