Wyoming’s governor said Thursday he supports — but will not join — a lawsuit Texas filed with the U.S. Supreme Court that attacks election procedures in the battleground states of Georgia, Michigan, Pennsylvania and Wisconsin. Seventeen Republican-led states have signed on to the suit.

Democratic President-elect Joe Biden prevailed in all four of the states in question, giving him the electoral votes necessary to win the November election.

“I strongly support the Supreme Court hearing the Constitutional issue of the Electors Clause raised by Texas in their petition,” Gov. Mark Gordon said of the case filed by Texas Attorney General Ken Paxton.

However, the governor said that Wyoming joining the brief could be a threat to states’ sovereignty.

The lawsuit has received considerable support from many Republicans and from President Donald Trump, who maintains — without evidence — that large-scale voter fraud occurred, masking what he says was a landslide reelection victory. However, his campaign and supporters have lost dozens of lawsuits challenging election results, some in courts presided over by judges he appointed.

On Thursday, 106 GOP representatives filed a motion with the Supreme Court in support of Texas’s suit. Wyoming’s lone congressperson, Rep. Liz Cheney, did not sign on. However, she did co-sponsor a resolution supporting “President Trump’s efforts to ensure that every legal vote is counted” in the presidential election and to prosecute election fraud.

Last month, Cheney called on the president to either present evidence of major voter fraud or respect the sanctity of the electoral process.

Gordon, meanwhile, did leave open the door for Wyoming’s participation at a later date.

“Should the Supreme Court grant Texas’s motion, we will weigh in a manner that is suitable and appropriate for the issues raised,” he said. “As always, I will make sure Wyoming’s interests are protected.”

On Wednesday, a group of 32 Wyoming lawmakers and lawmakers-elect signed a letter asking Gordon to join the case. Gordon responded that evening by asking Wyoming’s attorney general to look into the situation.

“I asked the Attorney General to look into the case and consider possible actions the State of Wyoming might take,” Gordon wrote Thursday. “General (Bridget) Hill did this, and after significant consideration we believe that the case could have unintended consequences relating to a constitutional principle that the State of Wyoming holds dear — that States are sovereign, free to govern themselves.”

The letter from Wyoming lawmakers and lawmakers-elect argues that the four battleground states “destroyed (Americans’ trust in election processes) and compromised the security and integrity of the 2020 election. The states violated statutes enacted by their duly elected legislatures, thereby violating the Constitution.”

Trump has repeatedly made unsupported claims of election fraud in battleground states. Paxton’s lawsuit repeats numerous false, disproven and unsupported allegations of illegal mail-in balloting and voting. Legal experts dismissed the challenge as frivolous, and officials in the four battleground states have rebuked it.

Biteman argues in the letter that “this case presents a question of law: Did the Defendant States violate the Electors Clause by taking non-legislative actions to change the election rules that would govern the appointment of presidential electors? These non-legislative changes to the Defendant States’ election laws facilitated the casting and counting of ballots in violation of state law.”

Legislators, legislators-elect who signed the letter

On Wednesday Gordon said in a statement he had asked Hill to “consider the matter and possible actions Wyoming could take.”

“The Texas lawsuit, if it is taken up by the Supreme Court, will provide the highest Court an opportunity to review concerns about the outcome of the election in four states,” that statement reads. “The Governor believes that fair and lawful elections are essential to our democracy, but it should be noted that this lawsuit is operating on a short timeline and Wyoming did not receive advance notice to be able to thoroughly review the filing before today.”

Like most Republicans, Gordon has avoided congratulating Biden on his victory. A week after the election, the governor tweeted that the country “should ensure that every legal vote is counted properly.”

“When a result is confirmed congratulations for the winner will be in order,” Gordon wrote.

In Wyoming’s recently completed congressional races, Gordon did not wait until the result was confirmed to congratulate Sen.-elect Cynthia Lummis or Cheney. In both races, he congratulated them within about a half hour of the polls closing when the race had been called by The Associated Press but most votes had yet to be counted.

President joins ‘the big one’

Trump said Wednesday that his campaign would join the case as he tried to look past the justices’ rejection of a last-gasp bid to reverse Pennsylvania’s certification of Biden’s victory.

Out of the roughly 50 lawsuits filed around the country contesting the Nov. 3 vote, Trump has lost more than 35 and the others are pending, according to an Associated Press tally.

The suit from the Texas attorney general demands that the 62 total Electoral College votes in Georgia, Michigan, Pennsylvania, and Wisconsin be invalidated. That’s enough, if set aside, to swing the election to Trump. Paxton’s suit repeats a litany of disproven and unsupported allegations about mail-in ballots and voting in the four battlegrounds.

“We will be INTERVENING in the Texas (plus many other states) case,” Trump said. “This is the big one. Our Country needs a victory!”

Legal experts dismissed Paxton’s filing as the latest and perhaps longest legal shot since Election Day, and officials in the four states sharply criticized Paxton. “I feel sorry for Texans that their tax dollars are being wasted on such a genuinely embarrassing lawsuit,” Wisconsin Attorney General Josh Kaul said.

On Thursday, Trump tweeted that “the Supreme Court has a chance to save our Country from the greatest Election abuse in the history of the United States.” Hours later, Trump held a meeting at the White House, scheduled before the suit was filed, with a dozen Republican attorneys general, including Paxton and several others who are backing the effort.

Still, some of the top state Republican prosecutors urging the Supreme Court to hear the case have acknowledged that the effort is a long shot and are seeking to distance themselves from Trump’s baseless allegations of fraud. North Dakota’s Wayne Stenehjem, among the 17 attorneys general supporting the case, said North Dakota is not alleging voter fraud in the four states at issue.

“We’re careful on that,” said Stenehjem, who noted that his office has received thousands of calls and emails from constituents asking the state to support the suit. “But it’s worth it for the Supreme Court to weigh in and settle it once and for all.”

Montana Attorney General Tim Fox called the lawsuit “belated” and said its chances “are slim at best.” But Fox joined the Texas suit he said the case raised “important constitutional questions about the separation of powers and the integrity of mail-in ballots in those defendant states.”

The Supreme Court, without comment Tuesday, refused to call into question the certification process in Pennsylvania. Democratic Gov. Tom Wolf already has certified Biden’s victory and the state’s 20 electors are to meet on Monday to cast their votes for the former vice president.

In any case, Biden won 306 electoral votes, so even if Pennsylvania’s results had been in doubt, he still would have more than the 270 electoral votes needed to become president.

A typically uncontroversial event, this year’s Electoral College vote was made significant by the president’s refusal to concede the election to President-elect Joe Biden.

Led by Texas Sen. Ted Cruz, the letter calls on members of the Republican-led Senate to reject the results of the election until a 10-day emergency audit can be conducted. 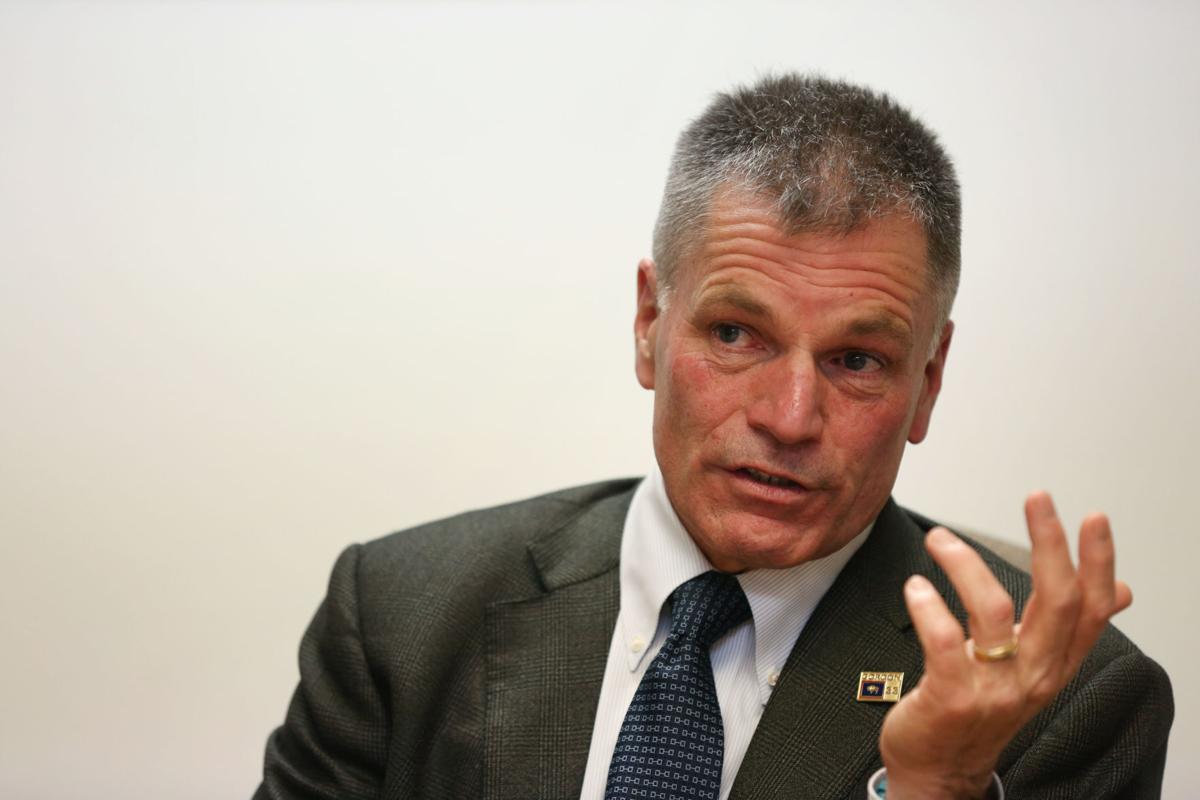 Gov. Mark Gordon sits down with the staff of the Casper Star-Tribune for an interview in December 2019 in Casper. 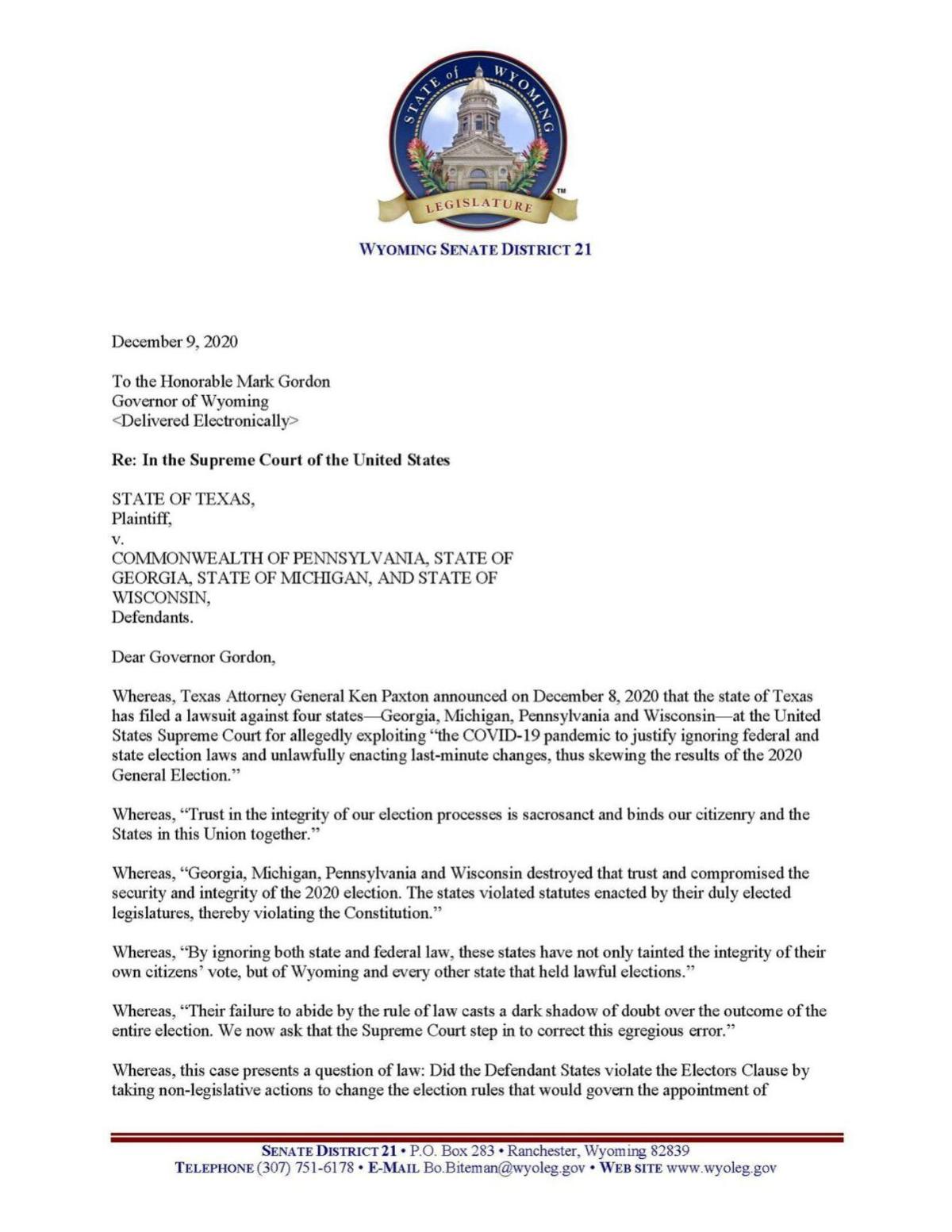 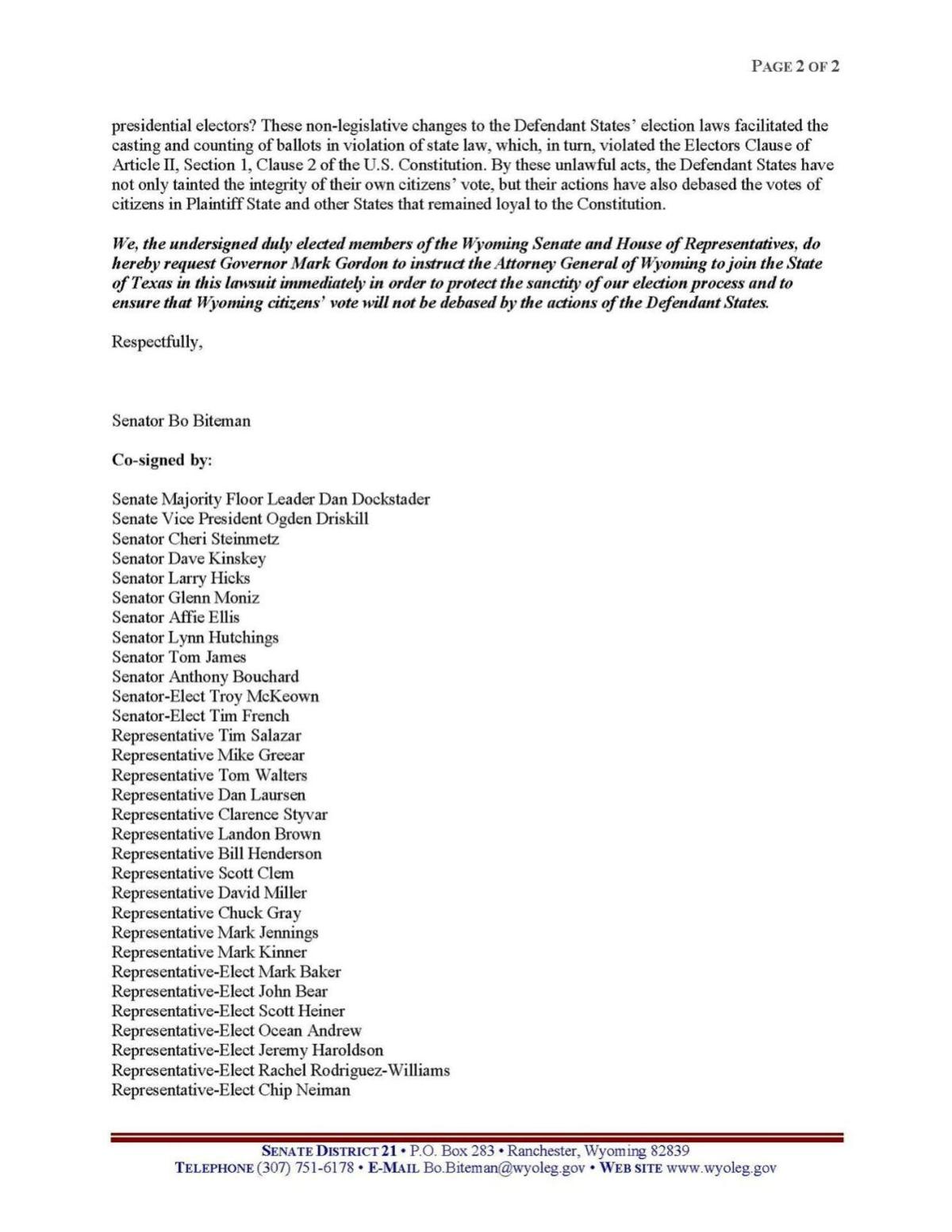