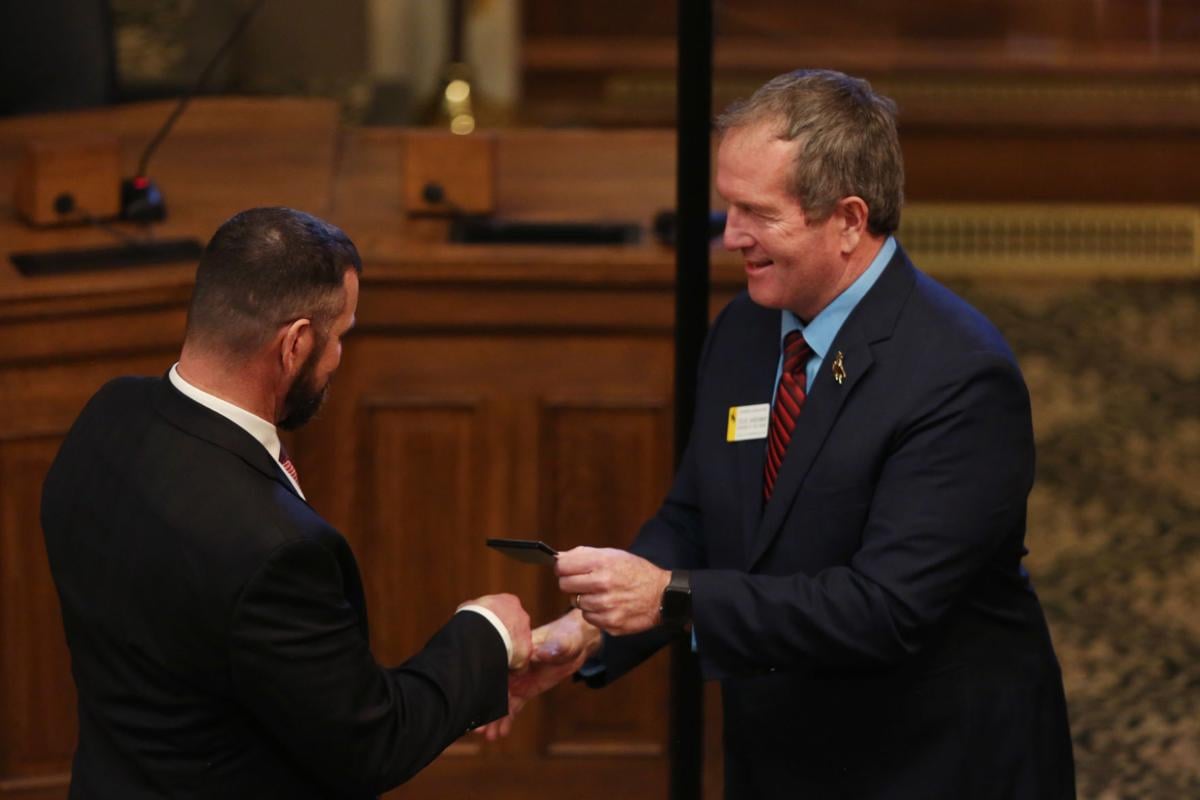 Rep. Steve Harshman passes the Speaker of the House badge to newly sworn-in Eric Barlow on Jan. 12 at the Wyoming state Capitol in Cheyenne. The Wyoming House of Representatives advanced a bill Monday that would expand Medicaid in the state. 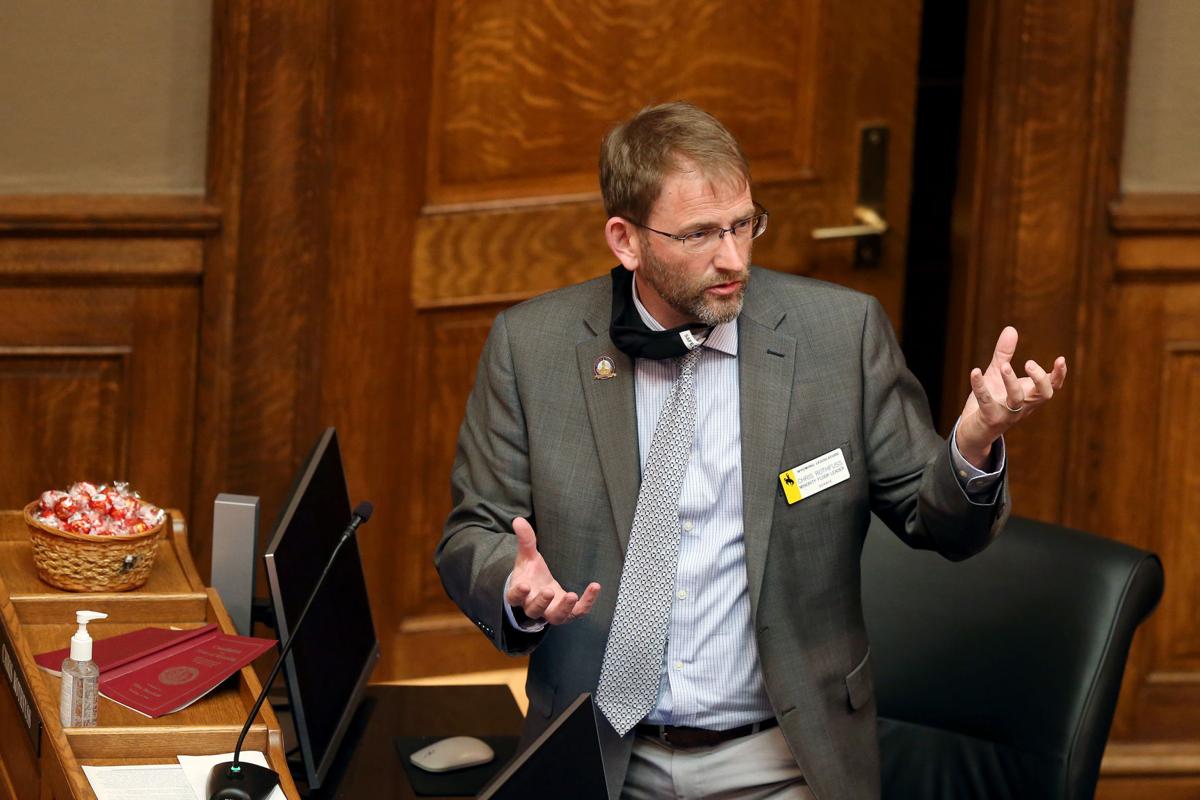 Sen. Chris Rothfuss, D-Laramie, speaks March 1 on a bill before a vote during the first day of the 66th Wyoming Legislature inside the state Capitol. The bill Rothfuss sponsored to expand Medicaid in Wyoming died Monday. A similar bill in the house was OK'd, however.

A House bill to expand Medicaid in Wyoming and give an estimated 25,000 additional residents health insurance passed an initial vote Monday after lawmakers in the Senate killed a similar proposal a few hours earlier.

As the evening wore on, it seemed the House would act as the Senate had and defeat the proposal by burying it under a procedural deadline. But leaders agreed to hear House Bill 162 as the last bill of the evening.

“It gives health care to people who don’t have it,” the bill’s sponsor, John Romero-Martinez, R-Cheyenne, said of the bill when introducing it to his fellow lawmakers.

Wyoming lawmakers have attempted to expand health insurance for low-income residents through Medicaid expansion for nearly a decade, and each attempt thus far has been defeated, often early in the legislative process.

House Bill 162 still requires two additional readings in the House before heading to the Senate. But several staunch opponents to expansion over the years are now in support of the effort. Those who have found themselves advocating for legislation they previously opposed include Rep. Steve Harshman, R-Casper.

“I’ve had kind of a change of heart, frankly,” he explained to his colleagues when presenting an amendment to rewrite Romero-Martinez’s bill to make it identical to the Senate file defeated earlier in the day.

“I voted no multiple times on this issue,” House Speaker Eric Barlow, R-Gillette, said. “I’m going to vote yes this time, because I haven’t seen any other solution. No one has brought anything forward, and I’ve looked myself.”

“I have to admit that although I’ve been one of the ones that have been resisting this, I have really given this some thought and I think it’s time.” Rep. Mark Kinner, R-Sheridan, said.

The federal government already guarantees it will cover 90% of costs for residents enrolled in expansion programs. For reference, those enrolled in the base program, without expansion, receive a roughly 50% federal match in Wyoming.

But additional residents covered by expanding eligibility are covered to a much higher degree by federal dollars.

Medicaid expansion widens the criteria for those eligible for the federal insurance program. Right now in Wyoming, eligibility is limited to low-income children, people with certain disabilities, pregnant women and some long-term care residents. As of Feb. 1, roughly 65,000 Wyomingites were covered by Medicaid, according to the state health department.

The expansion proposal would open eligibility to any “non-disabled childless adult” under 138% of the federal poverty level (an annual individual income of a little under $18,000). The Wyoming Department of Health says this could serve between 13,000 and 38,000 residents, but it’s likely the number of actual enrollees would fall somewhere in the middle; the health department estimates close to 25,000 people.

The bill put that 90% federal match into statute and ensured the state would withdraw from the federal program if the ratio were to decrease.

A similar bill in the Senate, sponsored by Sen. Chris Rothfuss, failed to advance Monday, defeated without a hearing by a procedural deadline. Supported by 12 bipartisan co-sponsors, the bill would have expanded Medicaid eligibility in Wyoming while locking in a federal cost-match to ensure the state never paid more than 10% of costs for residents enrolled in the expanded program.

“I’m very disappointed that we had no chance to hear or debate the bill. It’s really important for us to provide affordable health care to all citizens in Wyoming,” Rothfuss said. “This is the only possible vehicle to do that,” he said at the time.

He lamented that Senate Majority Floor Leader Ogden Driskill “buried” the bill, Rothfuss said, giving up the opportunity to at least have a debate on the floor. Not expanding Medicaid “is going to affect a lot of people in Wyoming,” he said.

The bill eked out an affirmative vote from the Senate’s Labor, Health and Social Services Committee earlier this month but required three readings by each legislative chamber and approval by the governor to become law. The bill did not get a debate beyond the committee room.

A previous version of this story incorrectly named the lawmaker who selects the order of bills for the committee of the whole. Senate Majority Floor Leader Ogden Driskill decided the order in which bills were introduced on Monday.

In order to get a debate, the Senate bill would have needed to be heard on the floor convened as the “committee of the whole” by Monday. However, Harshman’s amendment to rewrite the House Bill will give Rothfuss’ proposal new life. His name just won’t be on it.

Rothfuss gave an impassioned plea to advance the bill to allow for the discussion during that early March committee meeting. He faced skepticism from committee members about “socialized health care” and worries that the expansion wasn’t economically sound for the state. Rothfuss responded to those concerns by invoking the 25,000 people who could benefit from the coverage.

“Folks that are our working poor, the single moms we heard about with two kids, probably have to have two or three jobs, the mentally ill — those are the lives we’re playing with,” he continued. “And we’ve offered them nothing for the last decade.”

“These are 25,000 Wyomingites that we have failed to provide solutions for year in and year out since I’ve been in the Legislature” for more than a decade, he added. “It’s not as if there are alternatives on the table.”

The Wyoming Department of Health published a report Feb. 1 detailing what Medicaid expansion might offer the state. That report found expansion could cover 25,000 additional Wyomingites with Medicaid for $20 million a biennium.

The report also noted expansion would likely result in better outcomes for newly insured residents. Citing a Kaiser Family Foundation report, the health department noted more people on Medicaid are likely to report themselves in “good or excellent health” than those uninsured, and rates of depression tend to decrease.

The report also noted expansion could prevent early deaths, notably in aging residents who are not yet eligible for Medicare.

While the benefits to newly insured individuals is clear, the health department’s report explained expansion would not make Wyoming more money. It could, however, offset some of the state’s costs.

The bill, which passed the House of Representatives on third reading by a 32-28 margin, now advances to the Senate.

Number of significant bills fail without hearing in Wyoming Legislature

Over two dozen bills quietly died without a hearing on the House or Senate floor this week due to a procedural deadline.

Watch Now: What will it take to keep schools open?

As Omicron Spreads, Americans Are Going To Work Sick

As Omicron Spreads, Americans Are Going To Work Sick

Rep. Steve Harshman passes the Speaker of the House badge to newly sworn-in Eric Barlow on Jan. 12 at the Wyoming state Capitol in Cheyenne. The Wyoming House of Representatives advanced a bill Monday that would expand Medicaid in the state.

Sen. Chris Rothfuss, D-Laramie, speaks March 1 on a bill before a vote during the first day of the 66th Wyoming Legislature inside the state Capitol. The bill Rothfuss sponsored to expand Medicaid in Wyoming died Monday. A similar bill in the house was OK'd, however.