A new poll commissioned by four nonprofits shows significant support for Medicaid Expansion in Wyoming, a government health insurance assistance program for those who can’t afford insurance and aren’t offered it by their employer.

The results come one week before a special legislative session and six months after a proposal to expand the health insurance program died in a Senate committee after passing the state House for the first time after nearly a decade of lobbying.

This new poll did not specifically ask residents if they support Medicaid Expansion, but rather described a specific scenario and asked respondents if they would support or oppose that scenario.

“There could be a proposal in the state legislature that would expand Medicaid health care coverage to Wyoming residents who earn under eighteen thousand dollars per year for an individual or approximately thirty thousand dollars for a mother with two kids. The federal government will cover 90 percent of the costs, while the state covers the other 10 percent,” the survey states.

That scenario is what the nonprofits hope lawmakers will consider when debating a committee-sponsored bill advanced during the interim session in May. 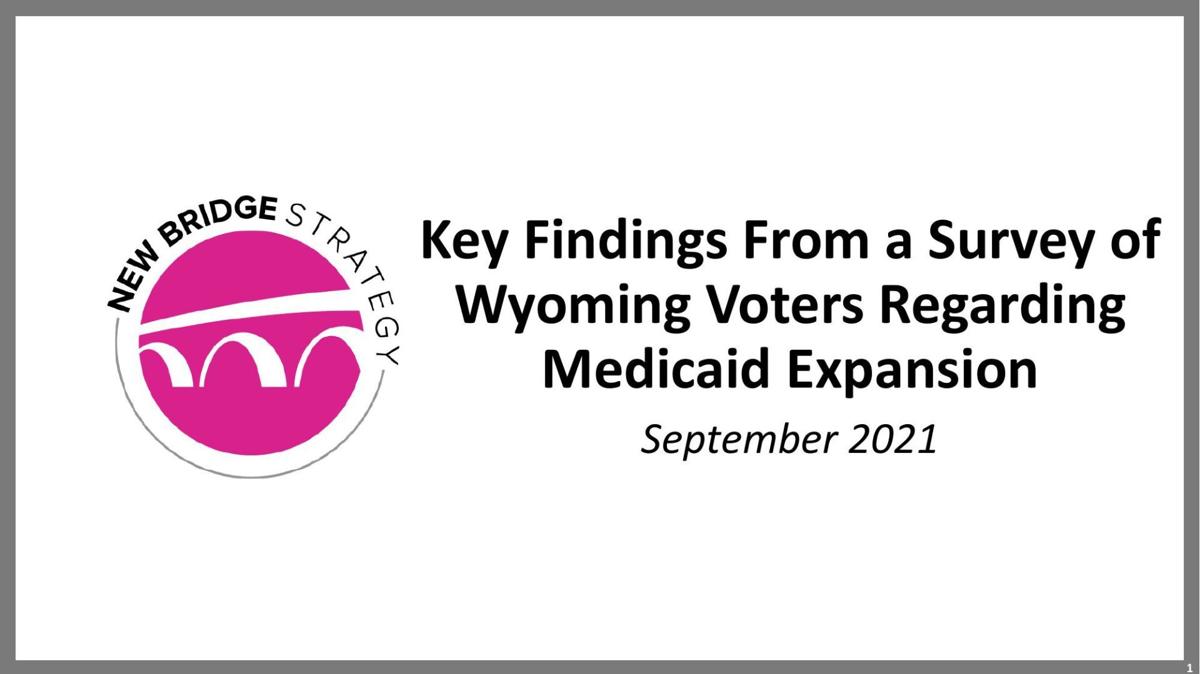 Asked if they would want their state lawmakers to support such a proposal, 65% said they would.

The poll was commissioned by the American Cancer Society Action Network, the American Heart Association, the American Lung Association and the AARP, and it was conducted by the Colorado-based firm New Bridge Strategy. It surveyed 500 residents across all Wyoming counties, a statistically sound figure for these types of polls. (The University of Wyoming’s Survey and Analysis Center often conducts state-level polls using roughly the same number of respondents.)

Lawmakers in one week will descend on the state capitol for a special legislative session geared toward opposing federal vaccine mandates. It’s unclear what legislation will be allowed on the floor for debate, and what will be barred from consideration until the normal budget session in February.

“We just think it’s important that the people of Wyoming have health coverage regardless of their economic situation as soon as they can get it. If the legislature would choose to act during this special session and pass it, so much the better for the people of Wyoming,” said R.J. Ours, one of the poll’s commissioners and government relations director for Wyoming’s American Cancer Society Action Network.

Medicaid is in effect a government assistance program for low-income residents who can’t afford health insurance on their own.

It’s sometimes confused with Medicare, which is a federal insurance option mostly for residents 65 years and older.

In the 12 states that have not voted to expand Medicaid, it’s a somewhat limited program for which eligibility can differ from state to state. In Wyoming, it supports low-income children, pregnant mothers and residents with certain disabilities, with a handful of other caveats.

In states where the program has been expanded, the insurance covers a broader swath of low-income residents who can’t afford private insurance plans and who aren’t offered that coverage by an employer.

For Wyoming, roughly 25,000 people fall into the latter category, but because the state’s program has not been expanded, that group doesn’t have access to health insurance at all.

Organizations like those that commissioned this newest poll have lobbied the Wyoming Legislature for nearly a decade to make the switch. The poll shows that the majority of Wyomingites want to see some form of action from their state leaders.

After the economy and jobs, concern over health care costs and access drew the most responses, with 32% of respondents saying that was the “most important” issue facing Wyoming.

Respondents also indicated that their own access to care might not be indicative of all Wyomingites’ experiences. More than half of respondents said the current system doesn’t meet the needs of “working people with lower-incomes,” though 70% said the system is currently meeting their own needs.

A new federal incentive led many lawmakers this spring to support expansion after having opposed it for years. But the momentum was short-lived.

Despite passing the House in March — the first time such a proposal made it through a legislative chamber in the near decade proponents have lobbied for it — the drama last session came to a head in a five-person committee hearing dominated by some of the most socially conservative lawmakers in the state.

There was uncertainty heading into the hearing — so much so that longtime House members Reps. Pat Sweeney and Steve Harshman, both of Casper, attempted to lobby the Senate committee themselves.

The pair asked the committee to give the bill a chance to be heard on the Senate floor, to allow for a greater debate among the entire body.

“I’ve always prided myself as the most pro-life speaker in the history of Wyoming,” Harshman said at the time. Of those who could benefit from expansion, he said, “These are lives too.”

Despite pleas to let it be debated by the whole Senate, the bill died 3-2, with Sens. Fred Baldwin and Dan. Furphy in favor.

Sen. Lynn Hutchings, a staunch opponent of expansion, asked Harshman and Sweeney before the vote if sending it to the floor would provide any more information.

“Should we send this to the floor to hear the same thing over and over again?” she asked before casting her “no” vote.

If lawmakers don’t take up the issue next week, Medicaid expansion will be an imminent conversation in February, Our said. But for that budget session, all bills will need support from two-thirds of all members in their respective chambers for legislation to even be considered.

Still, he hopes reluctant lawmakers listen to their constituents, who largely want to see Medicaid expanded. The pollster who organized the latest survey provided a regional and partisan breakdown of the responses that shows support is not factional.

The majority of respondents in each Wyoming region supported the scenario laid out above. When broken down by party, 58% of Republicans were in favor, as were 64% of independents and 98% of Democrats.

What do we know about the Omicron variant?