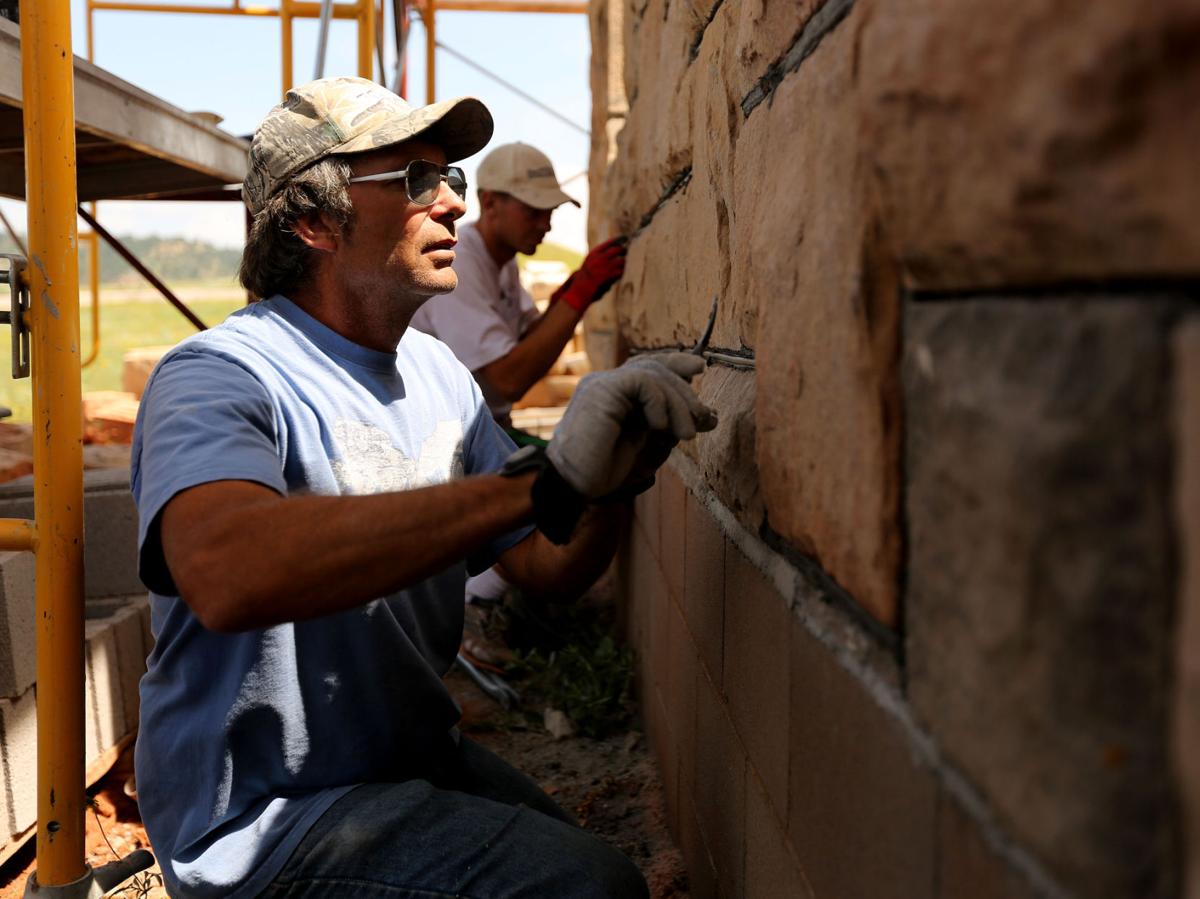 John Francis smooths mortar between stones while reassembling the Toomey’s Mills office building in Devils Tower recently. The building, which dates to the 1930s, was dismantled in Newcastle and moved to Devils Tower where it is being reconstructed stone by stone. 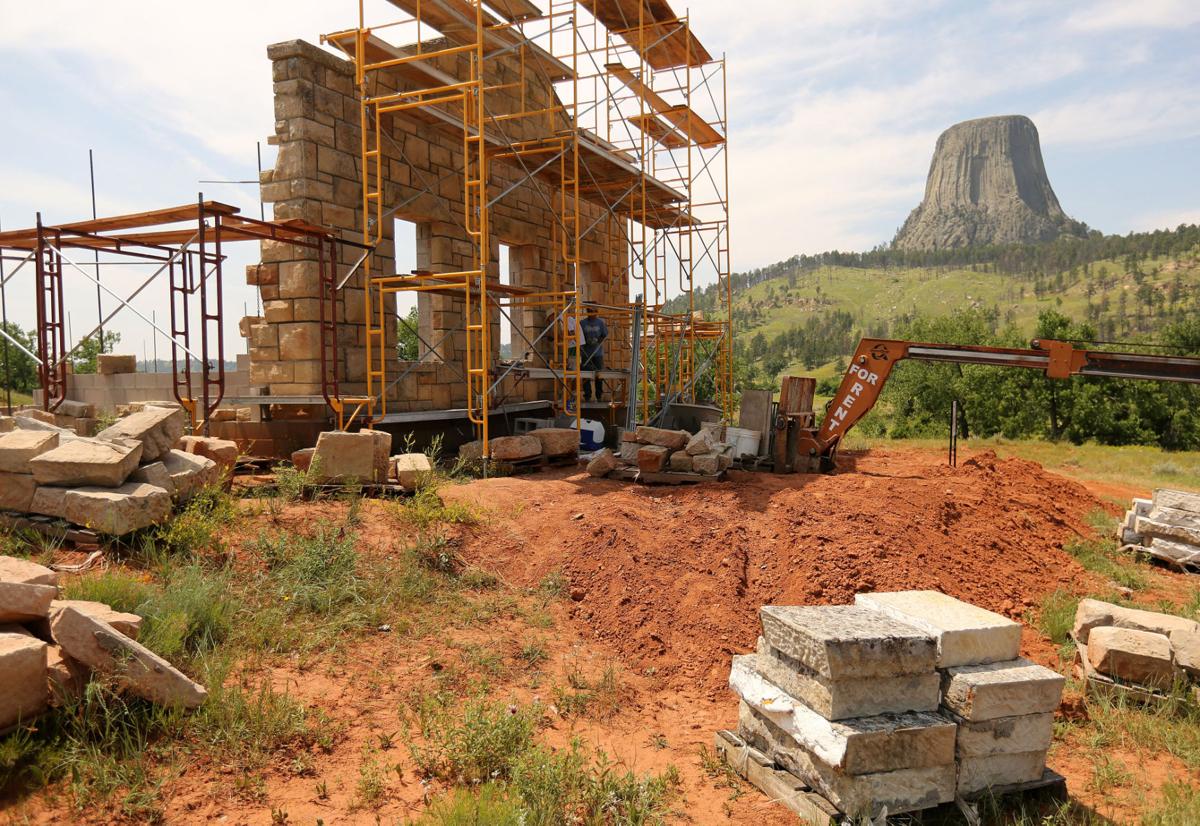 A former flour mill building from Newcastle is being reassembled in the shadow of Devils Tower National Monument. The historic structure was demolished in Newcastle to make way for a convenience store. 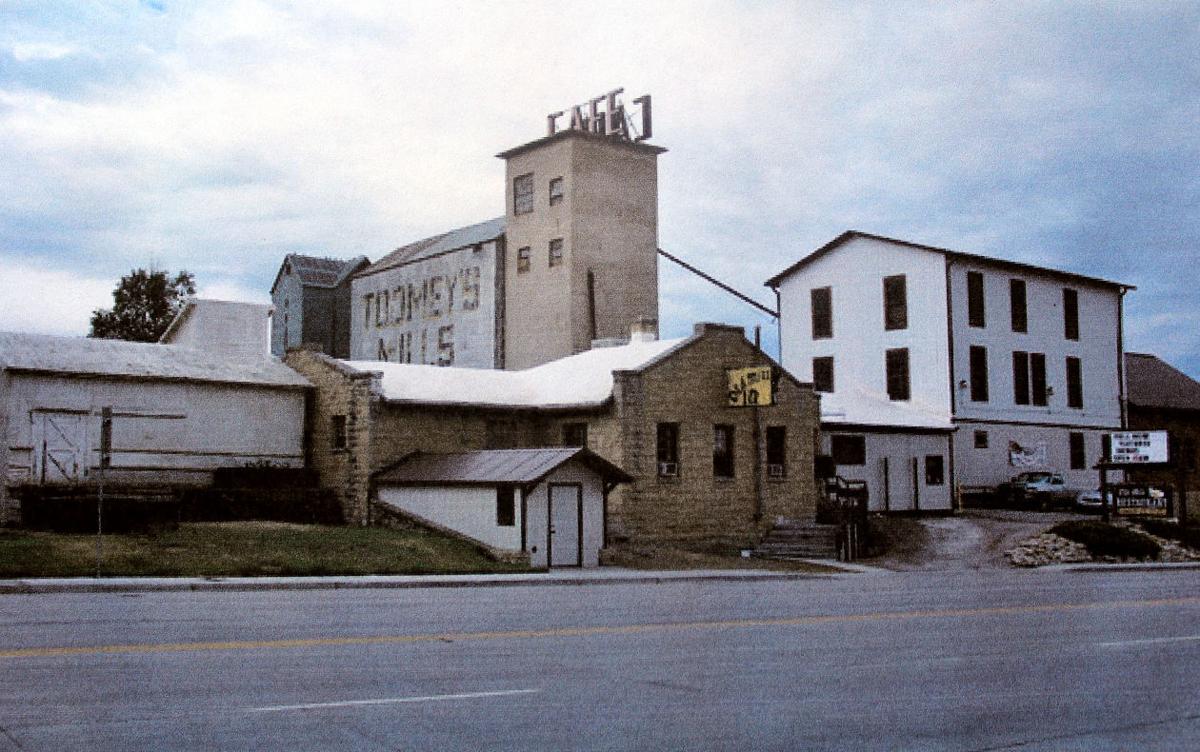 The "Old Mill" in Newcastle operated as a flour mill from 1905 to 1965 and housed various businesses until it was demolished in 2012.

DEVILS TOWER -- In the 1930s, masons constructed a building made of wheat-colored sandstone at Toomey’s Mills, a growing Newcastle flour company that needed new office space.

Decades later, with the flour mill long shuttered, the stones -- having darkened to a salmon hue with age -- are again being pasted together with mortar near the foot of Devils Tower National Monument.

Ogden Driskill, a state senator, rancher and business owner in the area, has commissioned Newcastle stone mason John Francis to reassemble the building.

It will be a hall for wedding receptions and other events. Depending on costs and weather, it may take three years to reconstruct.

Residents of northeastern Wyoming said they miss what had been called the Old Mill, now the site of a Maverick convenience store. But they're relieved the stone building is being restored.

“I’m happy he’s building it,” said Newcastle historian Leonard Cash. “Otherwise, it would have gone to the dump.”

The standstone used in the building was quarried near Newcastle. Each hand-cut stone still contains marks from a chisel, said Francis, the mason.

After Maverick purchased the Old Mill, as it was known locally, it sold all the equipment inside. Driskill drove to Newcastle to buy some of it. Maverick representatives told him the stones were for sale, too.

They were beautiful, he said. He purchased them and hoped his wife wouldn’t be too mad. She wasn’t.

“This is my midlife crisis,” he said.

Driskill hired Francis to begin reassembling the building this summer.

Each stone is shaped differently than the next. The stones perfectly fit the old building, and Francis had to reconstruct the building at the new site in the same pattern, Francis said.

Francis numbered each stone with a construction marker. He sketched the building and each numbered stone on a piece of paper, and saved it for reconstruction.

But the stones were stacked on wooden pallets and left outside at Driskill’s place.

When Francis noticed the elements had worn away many of the numbers, the sketch proved even more valuable, as he depended on it and old photographs posted on Facebook to piece together the building, Francis said.

In addition to the stone, old beams that held the building up from the basement are being repurposed to support the entrance door, Driskill said.

A wall that faces Devils Tower will be glass to provide a view. Other walls will be made from prefabricated stone that looks like the sandstone, Driskill said.

“Long term, there will be another building that goes off to the side,” Driskill said.

The original buildings at the mill were constructed in 1905, and dubbed Newcastle Roller Mills. It was once the largest flour mill in the state, said Cash, the local historian.

The mill ground flour mostly grown by farmers north of town. It produced biscuit mixes, flour of a better quality than Pillsbury and Betty Crocker and Toomey's Flapjack Flour. The flapjack mix was sold in the Midwest and along the West Coast, he said.

“People would say if (the pancakes) weren’t Toomey’s, they weren’t worth eating,” he said.

The mill closed in 1965 after one of the owners died.

Throughout the years, people owned the Old Mill and operated businesses out of it. Doug Brown bought it in 1995 and ran it for 13 years, using the different buildings as a coffee shop, restaurant, drive-up liquor store and lounge.

“We kind of had it all, but I guess the most revenue-generating times for the building were in the early morning,” he said. “We’d serve one heck of a breakfast over there. It opened at 5. We served a Dave’s Potato Omelet. He was one of our cooks, our main cook. He did an omelet and hash browns on the outside and he fried the whole thing.”

Brown and his wife sold the business -- he said the constant work took its toll -- to another owner. It was closed within years. He said he hopes new life will be breathed into the stone building.

“It was one of the prettiest buildings in town,” he said. “I really hated to see it go.”

John Francis smooths mortar between stones while reassembling the Toomey’s Mills office building in Devils Tower recently. The building, which dates to the 1930s, was dismantled in Newcastle and moved to Devils Tower where it is being reconstructed stone by stone.

A former flour mill building from Newcastle is being reassembled in the shadow of Devils Tower National Monument. The historic structure was demolished in Newcastle to make way for a convenience store.

The "Old Mill" in Newcastle operated as a flour mill from 1905 to 1965 and housed various businesses until it was demolished in 2012.