Hot Springs School District 1 will move to virtual classes for the next two weeks, superintendent Dustin Hunt announced in a letter Tuesday.

“It is disappointing to be in a digital instruction period this early in the school year, but unfortunately numbers of students and staff infected with COVID 19, or under quarantine orders has reached the threshold of needed separation,” Hunt wrote. 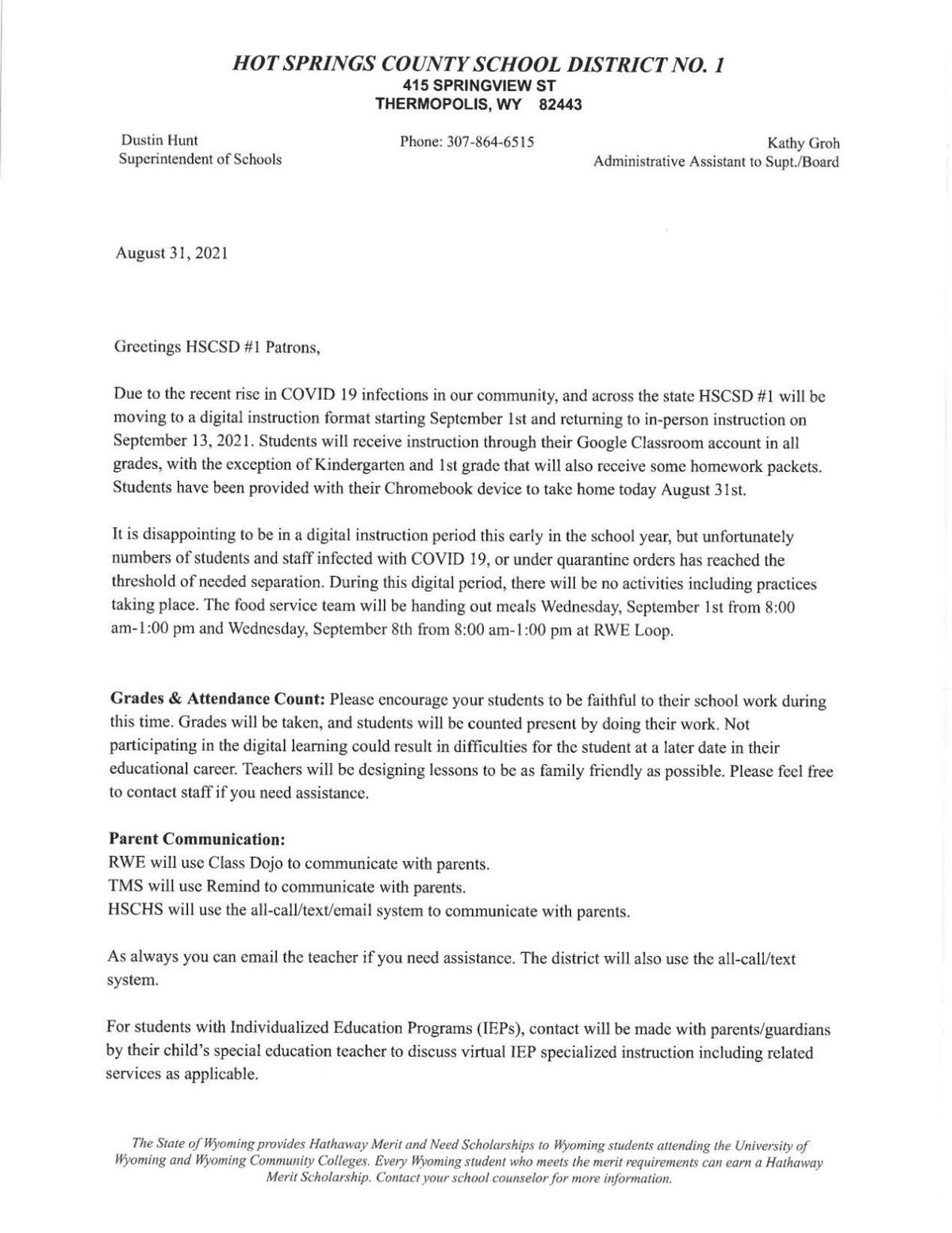 The announcement comes as several districts have already begun an in-person academic year, and as all others prepare for classes to begin this week.

When students do return to the classroom, face masks will continue to be optional — as is the case for the majority of Wyoming’s 48 school districts.

“Currently there is no state or county order for masking in place and vaccination is also a personal choice,” Hunt wrote. “The district is not inclined to make these decision for families at this time, but reminds families that masking and vaccination are the recommendations from the Centers for Disease Control.”

Hot Springs is among the smaller districts in the state, serving fewer than 700 students last year.

Wyoming succeeded in having the highest proportion of in-person learners in the nation during the 2020-2021 school year, and no school or district reported having to close due to a virus outbreak, according to the Wyoming Department of Education.

State and local health officials have attributed that success to a K-12 mask requirement in all Wyoming public schools.

Gov. Mark Gordon in early August announced that policy would not carry over into the new school year, and that no K-12 mask mandate would come from his office.

In a later press briefing, he acknowledged that he is concerned for those under 12 years old, who have not yet been approved to receive any COVID-19 vaccine.

“I am concerned about kids under 12,” Gordon said at the time. “I have grandchildren all under 12, and that is a concern. But we have been able to hold back the virus up until more recently and I think that means we can do it again. And I think it behooves all of us to protect our children.”

He added, “We know that there’s value to masks and we recommend those masks ... We also know that people have very strong concerns about masks. Some people feel a certain sense of disquiet with them.”

School districts for the 2020-2021 academic year were required to submit “Smart Start” plans to the Wyoming Department of Education detailing how they would respond to virus outbreaks and other pandemic-related situations.

The state did not require the same reports this year, department spokesperson Linda Finnerty said via email.

COVID-19 infections and hospitalizations are on the rise in Wyoming, with 195 patients being treated for the virus Monday. The figure is nearing the state’s peak of 247 patients in late November.

The delta variant of SARS-CoV-2 is considered 60% more contagious than the already more transmissible alpha variant. And evidence is emerging that children are more susceptible to illness from this variant.

In the last seven days, the number of people 17 and younger in the hospital nationally for COVID-19 has grown nearly 10%.

Natrona County School District employees will not get special leave if they need to quarantine after being exposed to or testing positive for COVID-19. Instead, they will need to use their standard allotment of sick days and other paid time off.

"On COVID let me be clear that we are not going to issue any mandates, no mandates will come from this office. No face masks, no vaccination mandates,” Gordon said.