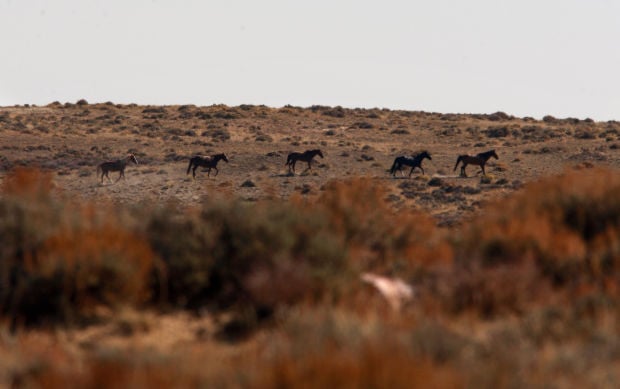 Wild horses trot along the prairie in September 2014 in Sweetwater County. 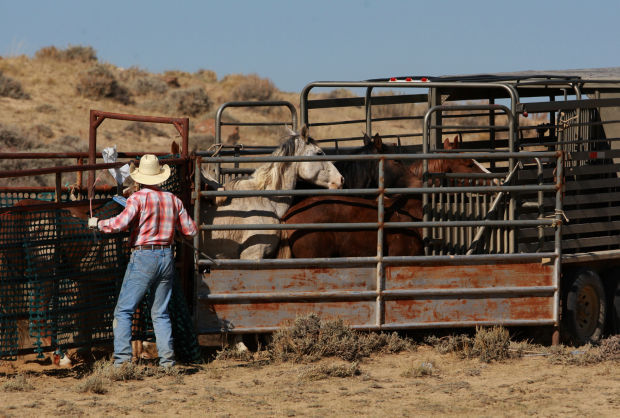 Roundup contractor Troy Cattoor loads wild horses onto a trailer for transport to a temporary holding facility in September 2014 in Sweetwater County. 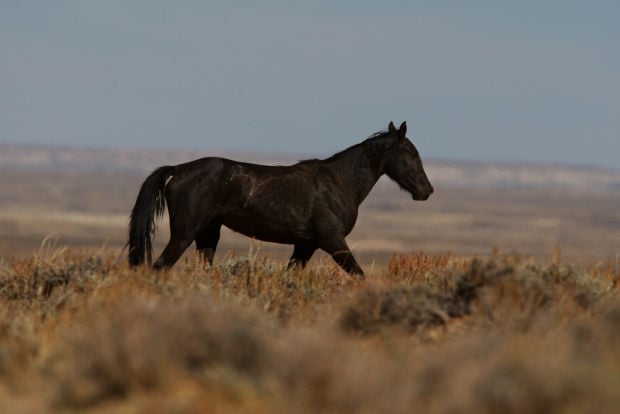 A young wild horse that escaped a roundup trots across the prairie in September 2014 in Sweetwater County.

A federal court battle over the fate of wild horses in Wyoming’s high desert could have implications for the management of public lands across the American West.

Wild horse advocates claim the Bureau of Land Management has ceded control over public lands near Rock Springs to local landowners. The federal agency claims it is only trying to fulfill its legal obligations to keep the horses off private grazing areas.

Underpinning the dispute are lofty notions of the American mustang as a symbol of the country’s pioneer spirit facing off against ranchers who claim wild horses are feral nuisances, an invasive species competing with productive livestock for precious resources in the arid west.

The debate centers on about 2 million acres of “checkerboard” land just east of Rock Springs. Created in 1862 as part of negotiations with the Union Pacific Railroad, odd-numbered blocks of public land were sold while the even-numbered blocks were retained by the federal government.

Today, the Rock Springs Grazing Association owns the private blocks and uses the entire checkerboard area to graze sheep. With wild horses on grazing association land exceeding the numbers set by federal policies, the group sued the BLM in 2011, demanding that the bureau remove all horses from private land. The two parties settled in 2013, and the BLM recently announced plans to remove all horses from the private and public lands within the checkerboard area. The first roundup occurred in 2014.

“It’s an impossible task for BLM to remove just from the private lands within the checkerboard area,” the bureau’s Rock Springs field manager Kimberlee Foster said. “It’s not fenced, the horses move freely … they might be on private land and half an hour later they’re on public land.”

But under the Wild Horses and Burros Act of 1971, Congress stipulated distinct procedures for removing horses from private and public lands. The BLM argued — and a U.S. District Court agreed — that the bureau could treat the entire checkerboard area as private land for the purpose of removing horses.

A group of wild horse advocates is now appealing that decision and argued before the 10th Circuit Court of Appeals in Denver this week.

Bill Eubanks, an attorney representing the horse groups, said that while he understands the challenge of managing the combination of public and private lands in the checkerboard, the BLM is still obligated to protect wild horses on public lands.

“The one thing you cannot do as an agency charged with implementing … the Wild Horses Act is to throw up your hands and say we’re just going to violate the statutes,” Eubanks said.

If the BLM is allowed to treat public land interspersed with private holdings under the laws governing private land, there could be repercussions for federal land management across the country, Eubanks said. He said there were 20 checkerboard parcels of land across the country with wild horses; many other public lands with wild horses are adjacent to or surrounded by private land.

“I’ve honestly never seen an agency treat public land as private,” Eubanks said. “If BLM can do this here, it’s a practice and approach that can be used everywhere across the country.”

Foster, the BLM field director, disputes the notion that the Wyoming fight will have any broader application. The Rock Springs grazers initially allowed some wild horses on their land before revoking their consent — a situation Foster called “extremely rare.”

Eubanks said that the bureau’s obligation under the Wild Horses Act should never have been affected by an agreement — or lack thereof — with private landowners and that Foster’s contention that the Rock Springs situation is unique “is from an objective standpoint completely false.”

The Rock Springs Grazing Association did not respond to a request for comment. However, attorneys for the association argued in a court brief that the BLM should be allowed no discretion in removing all horses from the checkerboard area.

“[T]he only way any wild horses can be maintained on the Checkerboard is with RSGA’s consent,” the brief argues.

The case is wrapped in acronyms, lengthy environmental reviews and legal precedents. The Rock Springs case centers on three “herd management areas” known as Divide Basin, Salt Wells Creek and Adobe Town. About half the area of those three pieces of land is taken up by the checkerboard.

The BLM is obligated to set a range for the number of horses that each area can support. While the number of wild horses is not supposed to exceed that range, the bureau is also charged with ensuring the population does not fall below the range.

Foster acknowledges that relocating all wild horses within the checkerboard area to off-site holding corrals may bring the horse populations in the three areas below their appropriate range.

“It just depends where the horses are,” Foster said.

“This is a resolvable situation,” Roy said.

But Foster argues that because the population ranges were set based on the assumption that horses would be allowed to roam on the checkerboard land, once the district court ordered the BLM to remove all horses from that area, the remaining public land can no longer support the original population range.

U.S. District Judge Nancy D. Freudenthal agreed, writing in her 2015 decision that moving the horses to the public land outside the checkerboard would only lead to them quickly returning to private land.

“This becomes a never-ending cycle of moving horses which roam or stray back,” Freudenthal wrote.

Foster said the Rock Springs BLM unit is revising its resource management plans and is looking at setting the appropriate population ranges for the checkerboard at zero to eliminate future debates of this sort. But a draft of the new plan won’t be ready until summer 2017.

The 10th Circuit of Appeals could release its ruling on the case within the next few weeks or months. In the meantime, the bureau is moving ahead with plans to remove the horses sometime after Oct. 15.

Foster said the roundup is taking place in October because that’s when new annual funding becomes available for federal agencies, not to squeeze it in before the court rules.

But Roy remains skeptical of the agency’s motives and adamant that the BLM’s agreement with the Rock Springs Grazing Association is nothing less than abandonment of its stewardship duties.

“The BLM, especially in Wyoming, is an agency that’s run by and for the livestock industry,” Roy said.

Since only 27 percent of BLM land in the state used for grazing had wild horses on it, there was no need for a showdown between horses and livestock, she added.

“Sometimes it sounds like wild horses are overrunning the West,” Roy said. “In reality they’re really on a small piece of the public pie.”

As for why Wyomingites should care about how the BLM treats wild horses, Roy said that congressional protection for the animals means it’s not a fight she needs to wage in the public arena — and she argues public support for the animals is a given.

“I don’t have to tell people to care about wild horses,” Roy said. “The fact these wild horses are still out there running unbridled and free on our public lands in the West is an important thing to many people.”

Wild horse advocates filed a lawsuit against the Bureau of Land Management this week, seeking to block a horse roundup this month in the 2 mil…

Federal authorities broke the law when they removed wild horses from Wyoming’s checkerboard region in 2014, the 10th Circuit Court of Appeals …

The Bureau of Land Management may not treat public lands as private out of practical considerations, a federal appeals court wrote in an opini…

U.S. Rep. Liz Cheney of Wyoming is backing the Trump administration’s request to allow the slaughtering of wild horses for meat in order to co…

Wild horses trot along the prairie in September 2014 in Sweetwater County.

Roundup contractor Troy Cattoor loads wild horses onto a trailer for transport to a temporary holding facility in September 2014 in Sweetwater County.

A young wild horse that escaped a roundup trots across the prairie in September 2014 in Sweetwater County.