Customers wait in line for rental cars in May at Jackson Hole Airport. Wyoming's most used airport will close temporarily in the spring for a construction project. 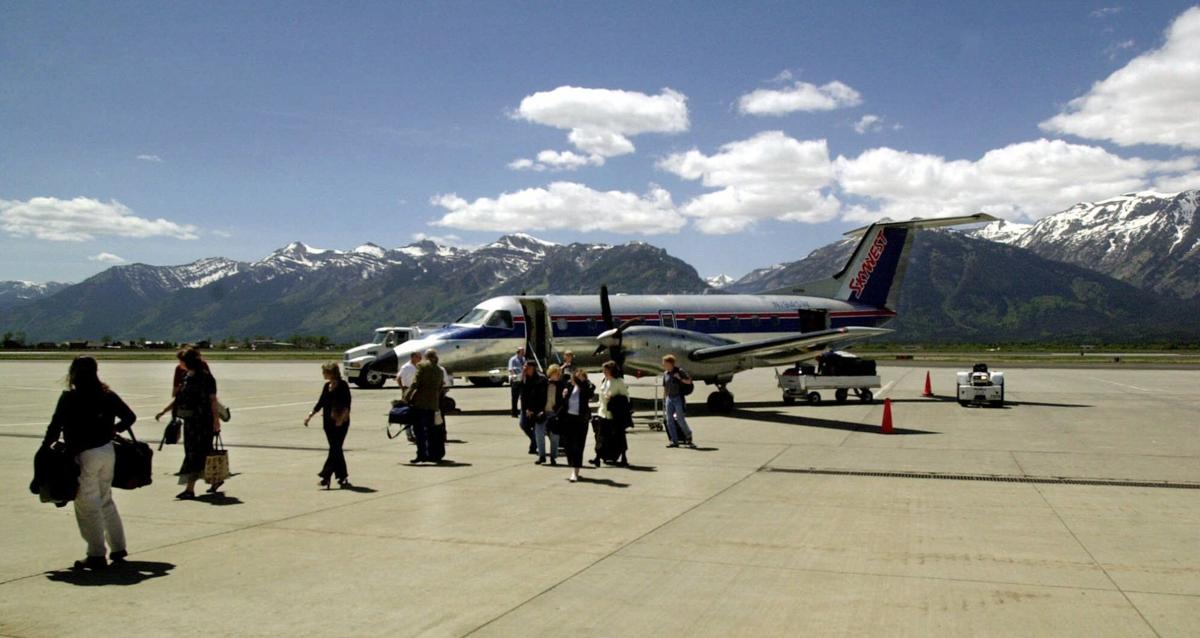 Passengers deplane at Jackson Hole Airport in 2001 in Grand Teton National Park. Wyoming's most used airport will close temporarily in the spring for a construction project.

Jackson Hole Airport, which accounts for the majority of air travel to Wyoming, will be closed for 78 days starting in mid-April due to a major construction project.

The airport’s single runway will undergo “complete reconstruction,” with a price tag of roughly $42 million, according to Jim Elwood, the facility’s executive director. Runways have to undergo major repairs every 30 years or so, he explained.

“This runway work is certainly the most expensive in 50 years,” he said.

While the airport is closed, there will also be a new storm water collection drainage and filtration system installed, which airport staff believe is the first in the nation.

The terminal building will also undergo repairs and upgrades during the closure.

The project comes at a time of increasing tourist interest in northwest Wyoming. The closest airport to Jackson is in Idaho, but Elwood “certainly hope[s] that they’ll choose to use Wyoming airports.” Airlines have entertained the idea of adding flights to Casper and Rock Springs during the closure, he added.

The construction will be paid for with federal money through the Airport Improvement Program.

State lawmakers on the Joint Transportation, Highways & Military Affairs Committee received an update on the airport construction project Monday during a broader review of air travel in Wyoming.

“At least it will be after the ski season and slightly before the big rush,” committee chairman Sen. Bill Landen, R-Casper, said of the project.

This year, air travel in Wyoming “heavily favors leisure markets,” with passengers flying into Sheridan and Jackson. Business traffic, on the other hand, has been slower to recover following the pandemic, which harms Casper, Gillette and Rock Springs.

Jackson accounted for almost 70% of air travel to the state in 2020, with Casper trailing far behind at 11.5%.

Demand for travel in northwest Wyoming remains high. The region experienced a record-breaking boom in visitors to the Yellowstone and Grand Teton National Parks this year.

Yellowstone, for example, has already set a new record for annual visitation with two months to spare, the Billings Gazette reported.

It welcomed 4.78 million visitors through October, shattering the previous annual high of 4.25 million.

Visitors to the park are a huge source of revenue for the state, too.

Teton County, which is home to the two parks, recorded the second highest increase in taxable sales from quarter one of 2020 to 2021, at 32.2%. Dr. Wenlin Liu, the state’s chief economist, mostly attributed the increase to tourism revenue, specifically from lodging and sales tax on entities like restaurants and gas.

“Grand Teton National Park and Yellowstone National Park are economic drivers throughout the Mountain West,” said Diane Shober, executive director for the Wyoming Office of Tourism. “The tourism is such an important part of Wyoming’s economic health and well being,” she added.

Cheyenne’s runway will also experience repairs starting soon, but this construction is not expected to shut down all traffic.

The Teton County Sheriff’s Office is investigating a Jan. 3 collision at Grand Targhee Resort that allegedly left a 64-year-old skier in critical condition.

Hageman's new fundraising committees are the latest sign of how unprecedented the race is for Wyoming's lone House seat.

Teton County’s mean, or average, adjusted gross income was $312,442. Not only was that the highest mean AGI in the nation for that year, it was also the first time any county had eclipsed $300,000 in mean AGI in history.

Coast Guard rescues kayaker off the coast of Louisiana

Coast Guard rescues kayaker off the coast of Louisiana

Customers wait in line for rental cars in May at Jackson Hole Airport. Wyoming's most used airport will close temporarily in the spring for a construction project.

Passengers deplane at Jackson Hole Airport in 2001 in Grand Teton National Park. Wyoming's most used airport will close temporarily in the spring for a construction project.