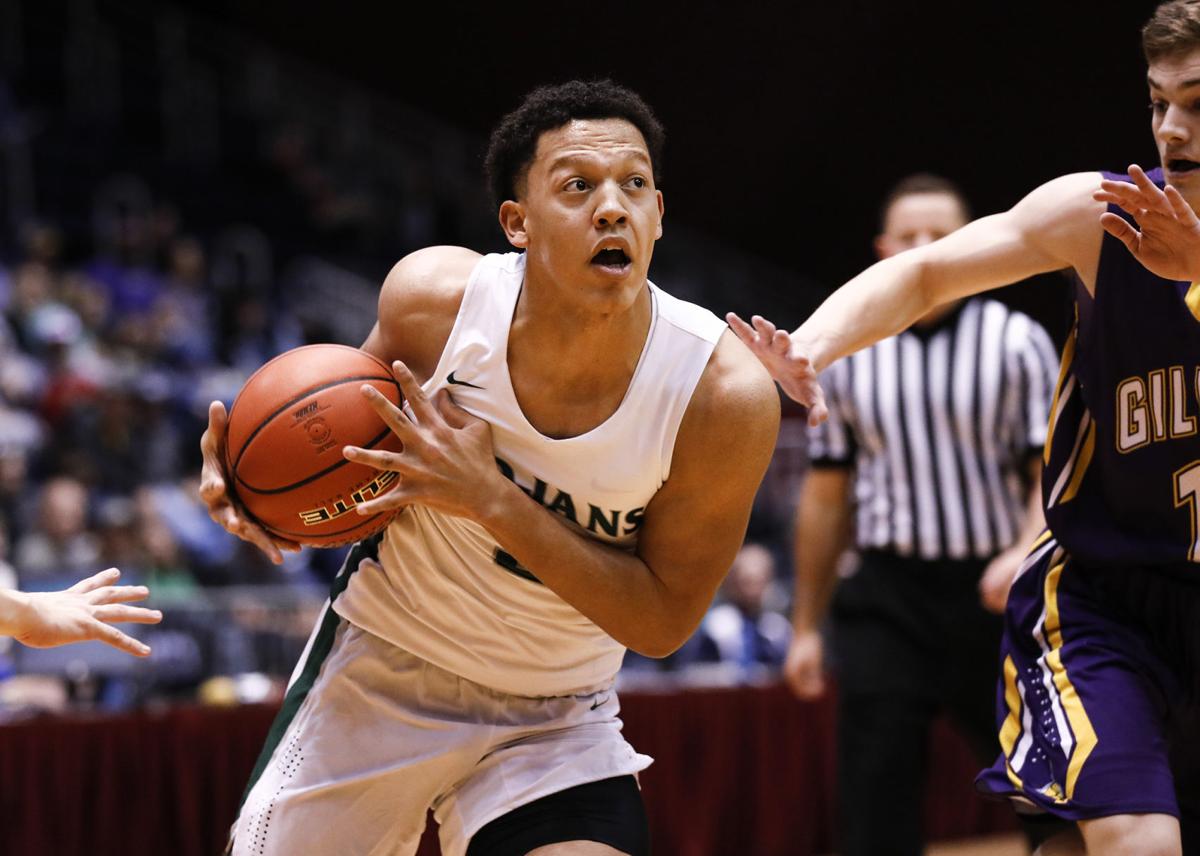 Kelly Walsh's Davion McAdam drives to the basket against Gillette in the title game of the Wyoming State High School Class 4A Boys Basketball Championships on March 9, 2019 at the Casper Events Center. McAdam had signed to play at Gillette College this fall, but the school eliminated its basketball program due to a financial crisis. 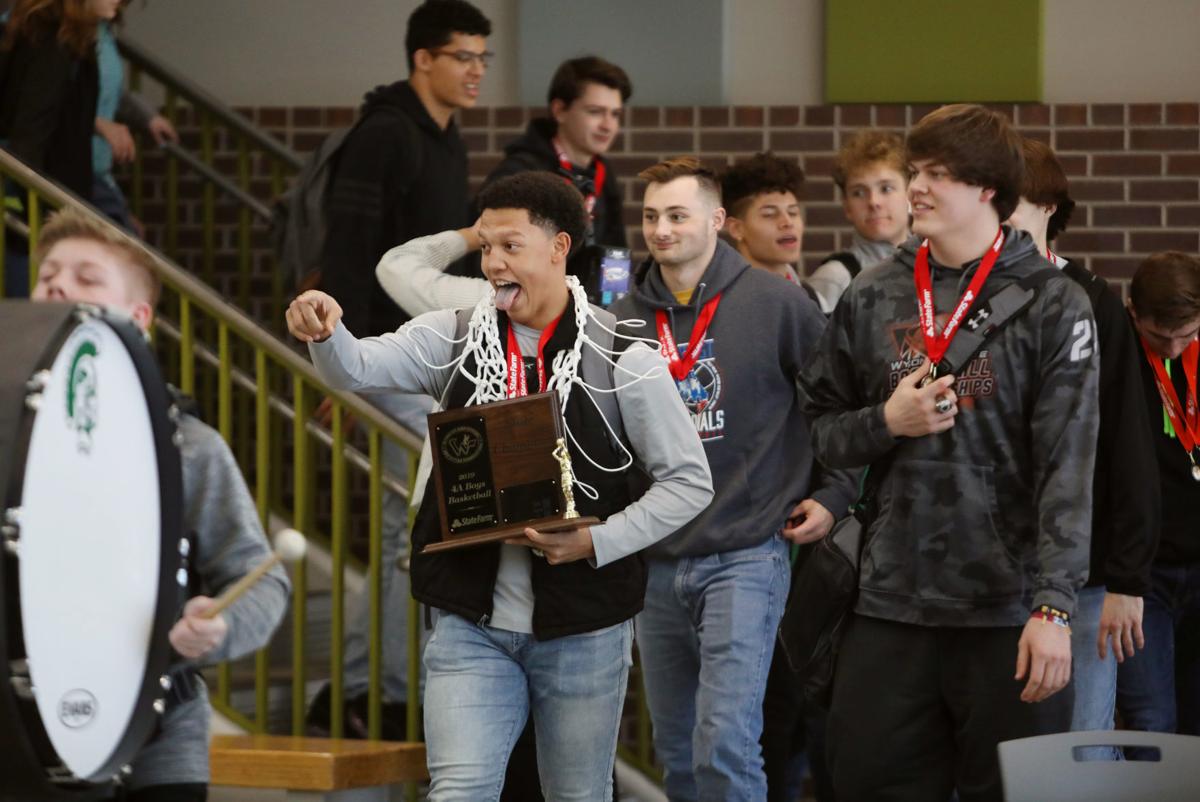 Davion McAdam points to someone in the crowd while parading through Kelly Walsh High School with the rest of the state championship basketball team on March 11, 2019.

Vijay Pitter was in a group chat with some friends Thursday morning when he got a text message that set his world spinning. Pitter, a recent graduate of Campbell County High School in Gillette, had months earlier signed to play soccer at Gillette College beginning this fall.

"I got a text from Coach Saber (Garcia) that the season wasn’t looking too well," Pitter said in a phone interview Friday. "So we were worried and started making some calls. We were trying to figure stuff out for a good 35-40 minutes until we put things together and figured out the season was going to be canceled."

Pitter was one of more than a hundred student-athletes at Gillette College and Sheridan College who found out the schools, which comprise the Northern Wyoming Community College District, were eliminating their athletic programs due to a fiscal emergency brought on by the coronavirus pandemic and state revenue losses.

There was no warning that cuts were coming. Athletes, coaches, trainers, boosters and fans from both schools were in the dark until the college administrators made it official.

Davion McAdam, who graduated from Kelly Walsh High School in 2019 and signed to play basketball at Gillette College, where he sat out last year as a redshirt, was still trying to piece things together Friday afternoon.

"I was just hanging out with a couple friends when we started getting texts about what was going on," he said. "And then we found out it was true.

"It's crazy because literally the day before I was talking with my family about the upcoming year and my plans and goals. So this really caught me off guard."

In a statement released late Thursday afternoon, the NWCCD said cutting most of the athletic programs at both schools was part of a larger, nearly $4 million reduction prompted by the COVID-19 pandemic and imminent cuts from the state of Wyoming, which is facing a dramatic decline in revenue.

Eliminating the sports programs -- four at Gillette College and five at Sheridan College -- is expected to save the district $2.8 million. Officials said the cost of the programs compared with the revenue they generate made them unsustainable amid a financial crisis.

“This decision was far from easy and definitely not something we wanted to take away from our student-athletes," college district president Walter Tribley said in a statement. "However, we simply cannot maintain a vision that includes full-time coaches, full-ride athletic scholarships coming from our general fund, and expensive recruitment and travel."

Thursday's decision not only brought an end to most of the two school's athletic programs -- the rodeo programs were saved, albeit with smaller budgets -- it reverberated throughout the state.

University of Wyoming women's assistant basketball coach Fallon Lewis has a special attachment to Sheridan College. A former all-state player at Tongue River High School in Dayton, which is less than 20 miles from Sheridan, Lewis played two years at Sheridan College before transferring to UW.

"I definitely call Sheridan College my home," Lewis said. "I made lifelong friends and developed lifelong relationships there, so it’s sad for me to realize there are student-athletes now who won’t get to experience that at Sheridan College.

"I was recruited by other colleges, but Sheridan was my home and my community."

Gillette College and Sheridan College are two of eight junior colleges in Wyoming, the only state with just one public four-year university.

University of Wyoming athletic director Tom Burman told the Star-Tribune earlier this month that even though UW was continuing to make reductions because of the coronavirus pandemic, he didn't expect the university to have to cut any sports programs.

Wyoming still has no plans to cut sports amid revenue loss

"We’re in the midst of finalizing our return-to-competition plan and moving forward with that," LCCC athletic director Dr. Cindy Henning said. "We totally have the expectation that we will be competing, albeit in a new normal, this fall. Our coaches have been part of that process and they have been engaging with the senior leadership on our campus and the (National Junior College Athletics Association).

"I really feel for those coaches and programs and their student-athletes," she added. "But as for LCCC, we’re continuing to move forward and anticipate having a final ‘plan’ to our department and to the senior leadership on our campus the early part of next week. We will have a final plan, but it’s got to be flexible so we can adjust as new directives come out from either local, county or state officials."

The same holds true at Casper College, where longtime volleyball coach Angel Sharman is currently entering her third year as the Thunderbirds' AD.

"We're going ahead as normal," she said. "We got reassurance from our president that we are going forward as planned. It’s unfortunate that we had teams in our region drop out, but we don’t have control over that. We do have control over ourselves and that’s what we’re going to focus on."

Vijay Pitter and Davion McAdam both had options other than Gillette College coming out of high school. Pitter was an all-state football player and an all-conference performer in both soccer and track for the Camels while McAdam helped lead the Kelly Walsh basketball team to the 2019 Class 4A state title. But there was something about Gillette College that resonated with both of them.

"I liked Coach Neary’s honesty and how he built the program from the ground up and had a lot of success," McAdam said in reference to Pronghorns men's basketball coach Shawn Neary. "That success, and how the program was looked at on a national level, really made me want to be a part of something special."

For Pitter, it was more about staying close to his family while still playing at the next level.

"I was looking forward to watching my little brother play football on Friday nights," he admitted.

Those opportunities are now gone. And even though they will retain their athletic scholarships if they decide to return to Gillette College in the fall, they aren't ready to have their athletic careers come to an end.

Pitter and McAdam have both reached out to schools that previously recruited them to see if they still had interest. Unfortunately, with just two months before the 2020-21 school year begins, most schools have already filled their allotted scholarships.

"It's tough," McAdam said. "Now I’m back in the recruiting process and I have to figure out what school is going to be best for me and my family."

The lawmaker said he shot the dog after it attacked one of his milking goats through a fence.

Upcoming state budget cuts could eliminate services for children and the elderly while reducing funding for mental health programs.

Kelly Walsh's Davion McAdam drives to the basket against Gillette in the title game of the Wyoming State High School Class 4A Boys Basketball Championships on March 9, 2019 at the Casper Events Center. McAdam had signed to play at Gillette College this fall, but the school eliminated its basketball program due to a financial crisis. 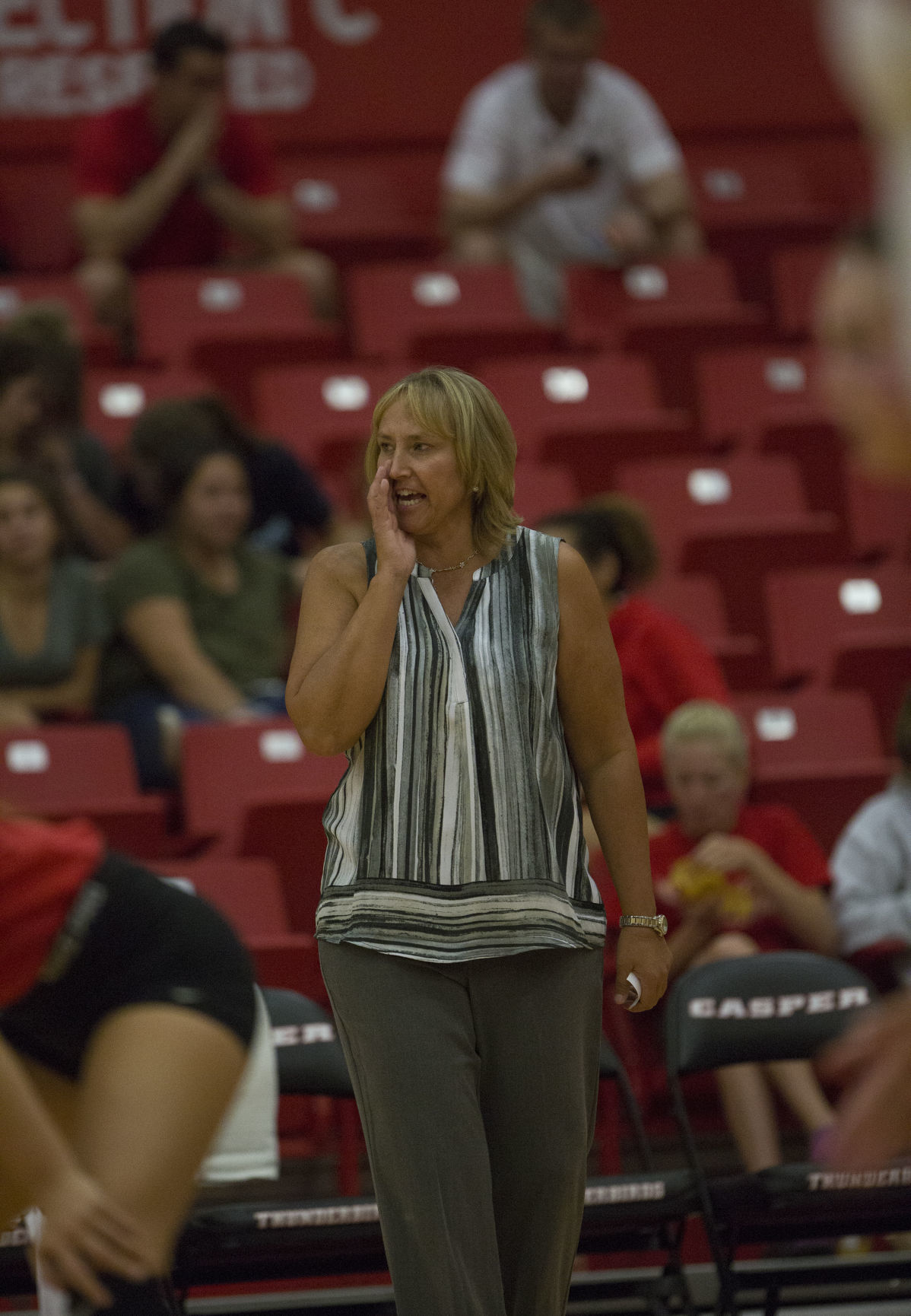 Casper College volleyball coach Angel Sharman talks with her players from the sideline during a game in 2017 at Swede Erickson Thunderbird Gym in Casper. Sharman is also Casper College's athletics director.

Davion McAdam points to someone in the crowd while parading through Kelly Walsh High School with the rest of the state championship basketball team on March 11, 2019. 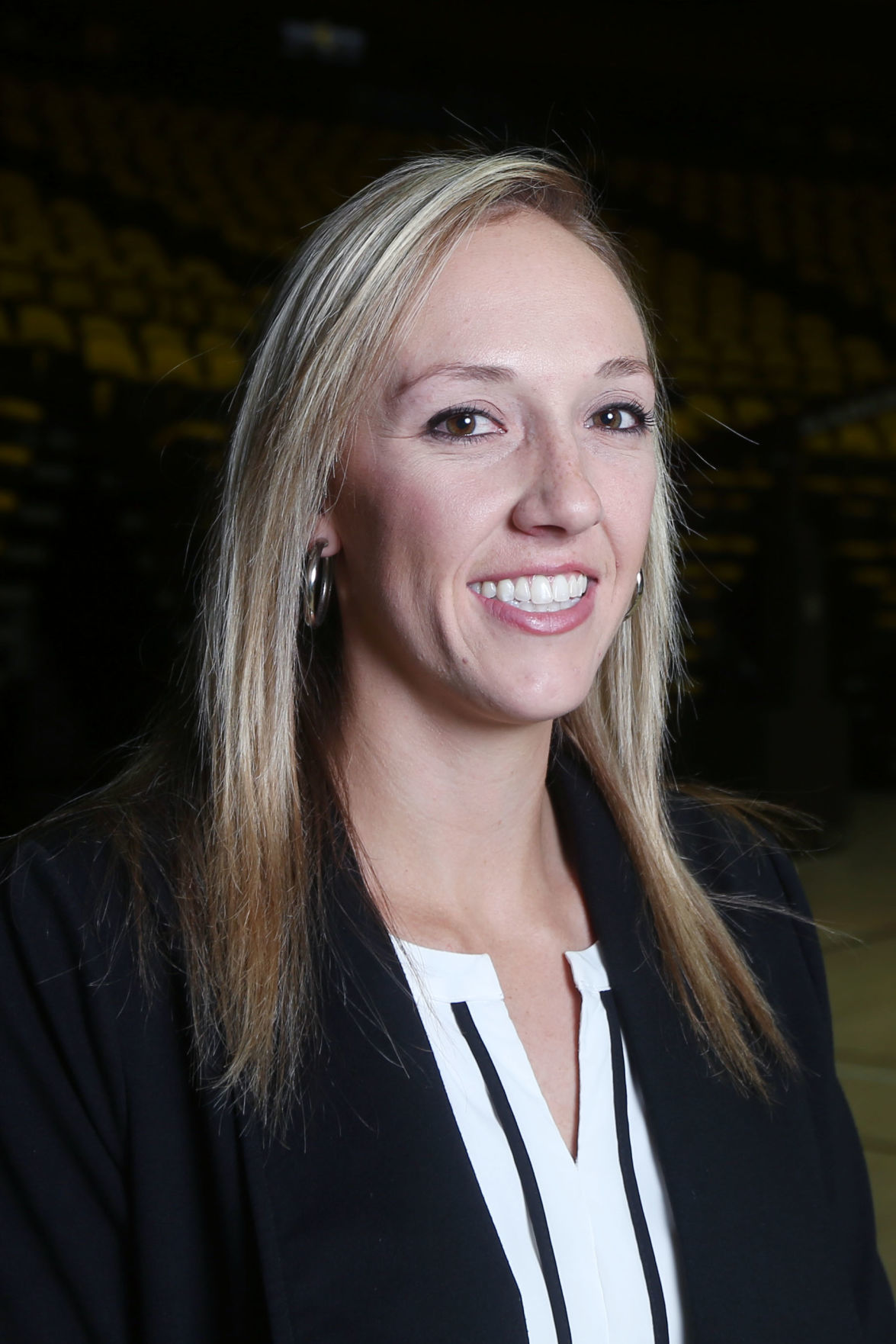 University of Wyoming women's basketball assistant coach Fallon Lewis poses for a portrait during media day on Oct. 10, 2019 at the Arena-Auditorium in Laramie.