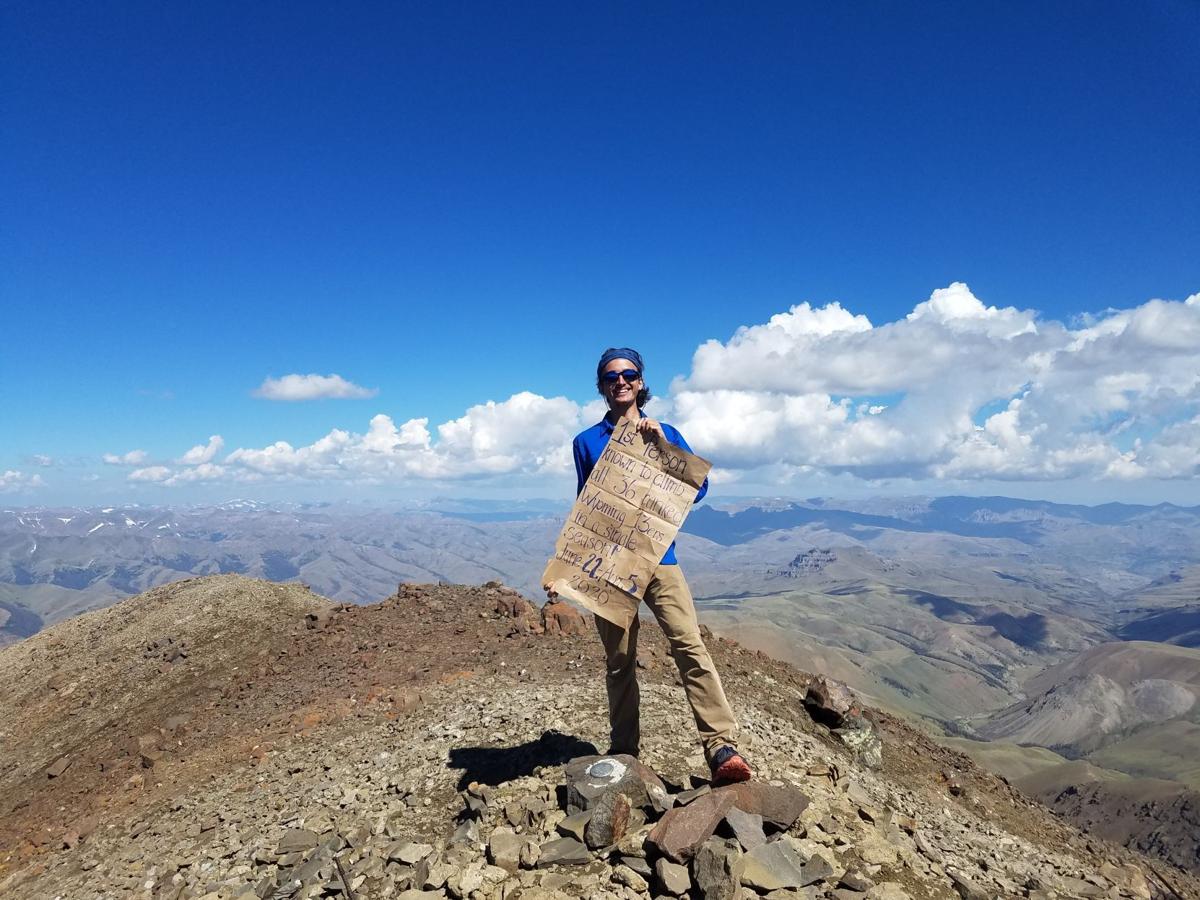 On the summit of Francs Peak, Eli Boardman, age 19, held the sign brought to the summit by his parents to commemorate the completion of his summer of climbing. 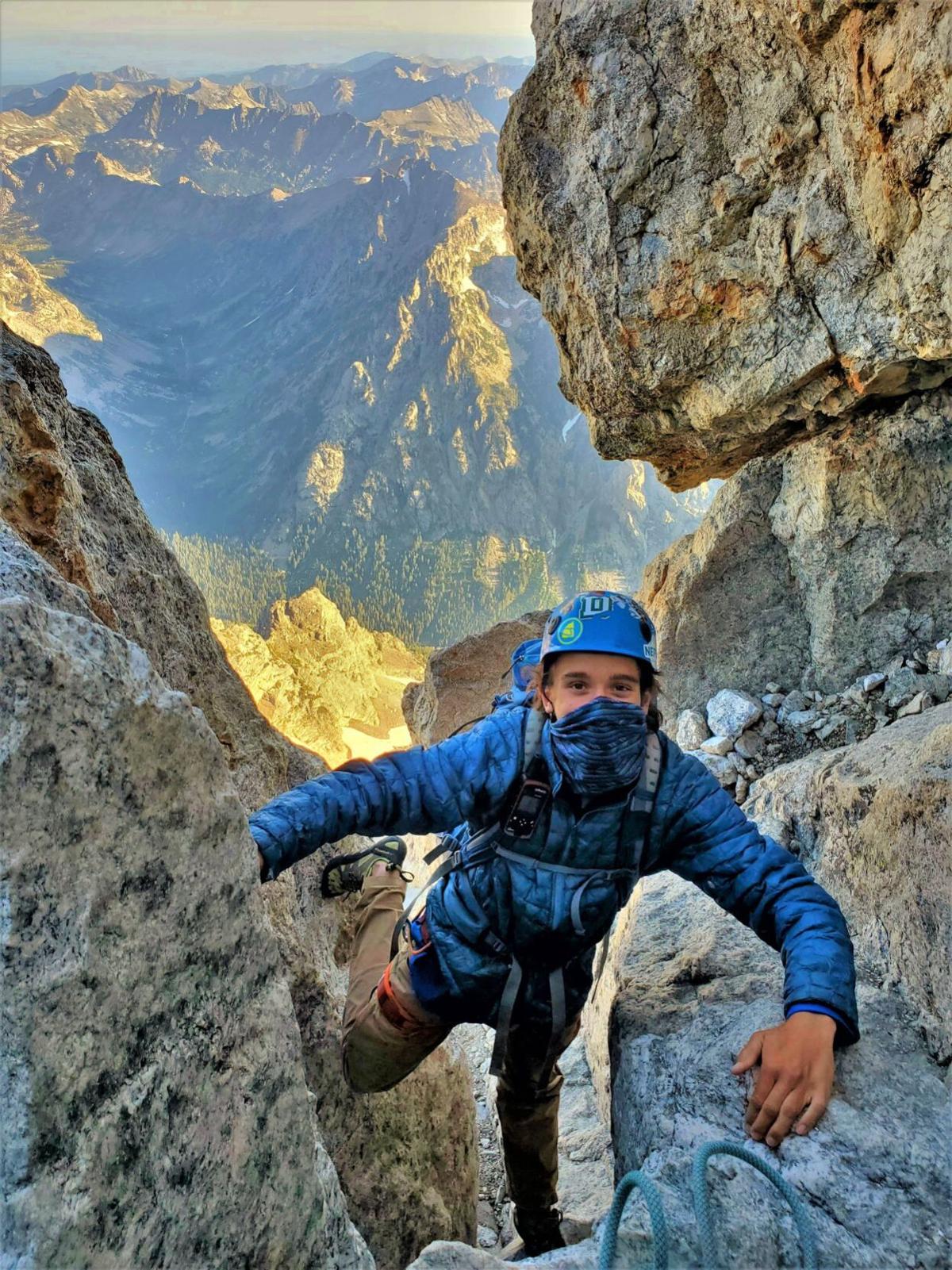 Climbing solo just below the summit of the class 5.4 Grand Teton – one of the hardest 13ers in Wyoming – Eli Boardman summited August 2. “It was exposed and somewhat challenging, but by far not the most dangerous. It was a good feeling to solo the Grand in just under 10 hours.”

DUBOIS — Sarah Meiser and Teresa Gergen completed climbing all 36 peaks in Wyoming above 13,000 feet in 2015.

It took Meiser and Gergen many years to complete; it took Boardman 45 days.

Born in Boulder, Colo., Eli has spent a lot of time in Dubois through his family’s connection to the Diamond A Ranch at Torrey Lake, which his great-great-grandfather homesteaded in early the 1900s.

The family visited the ranch almost every year, spending the time completing the usual chores and repairs associated with ranch life – and hiking.

In 2014, at age 13, Eli hiked the Glacier Trail for the first time with his family, where he “fell more and more in love with the Wind Rivers.”

The 26-day trip took them up most every major basin, and followed the spine of the range back to Whiskey Basin.

Eli was familiar with the Wyoming 13ers – those who climb all 36 Wyoming peaks above 13,000 feet elevation with at least 300 feet of optimistic prominence.

It was during the Gannett summit that Eli realized becoming one of the few who had attained the goal was a project he wanted to pursue at some point, but the idea stagnated for a few years as he helped build a cabin on the ranch with his dad, and a myriad of other tasks took a front seat.

Growing up in the midst of most of the peaks on the list – 31 are in the northern Wind Rivers – Eli thought “it would be cool to do them in all in one year.”

Entering his sophomore year at Dartmouth College, Eli was required to enroll for a summer term, but due to the coronavirus pandemic, classes were delivered remotely, which meant the family could live at the ranch all summer.

With weekends more or less free, this summer lined up as the perfect time for Eli to undertake the challenge.

He posted a thread to a Colorado mountaineering forum announcing his intentions, where he also discovered that two Washington climbers were also attempting the same feat.

Thirty-six peaks sounds daunting to a non-climber – and maybe even to a climber – but when compared to Colorado, which has over 500 peaks above 13,000 feet, Wyoming’s list – and Eli’s goal – seemed reachable.

“The consensus among climbers is that Wyoming has the best alpine climbing peaks in the lower 48,” Eli says. “It comes from a combination of the remoteness, the glacier architecture – which is superb, the concentration of the peaks all together and because you can climb one, but you can see 25 others.”

Defining which peaks make the list comes down to “how you tell a mountain from a rock,” Eli says.

Optimistic prominence is a measure of how much a summit rises above the highest saddle connecting it to a taller peak.

“It’s a way of objectively defining a peak – how independent it has to be,” he explains. “Is the continuum between Gannett obvious, or is it some little bump next to it? Is it its own thing or just a sub-summit?”

The quest itself began on June 22 at Elkhart Park, the main northwest trailhead near Pinedale, which would take him to Mount Woodrow Wilson and the Sphinx.

Eli backpacked in solo, believing it wouldn’t be too snowy, but it was, leading to 10 miles of postholing – falling through the snow to mid-calf or more, creating a hole which is the shape dug when setting a post with a posthole digger.

“It was bad,” he says, of the conditions, combined with carrying his climbing and overnight gear.

Heading out in the dark at about 2 a.m. from the Titcomb Basin camp was a climb up snow with crampons – spiked metal plates fastened on boots to prevent slipping – with more than 45-degree steep snow slopes up to the summit.

“It was a little sketchier than I was hoping,” Eli says, but from that vantage point, he watched the sunrise across Gannett Peak.

Other than a route and a destination, each climb offered opportunities to figure out what was in his comfort zone and “improvise the best way out when necessary.”

The trips settled into a pattern of climbing in the morning, rolling back into camp by late morning or early afternoon, packing up camp and driving back home.

Planning came down to location, weather and timing.

Eli had previously summited nine of the peaks on the list.

“I spent so many years memorizing features and routes, I would pick a group (of peaks) I knew could be done all together,” he says.

Once a forecast was in hand, it was a matter of determining whether the window allowed for a full day or a short day of hiking.

On June 27, Eli tagged eight peaks in one day, which he thinks might be its own record.

With what he thought was a good forecast for the entire day, Eli set out to reach all the peaks north of Gannett, with high plateaus, which could be traversed.

He was also feeling pressed to get ahead of the Washington climbers.

Backpacking into Gannett Creek one day, he began the next day by climbing Koven, “one of the hardest – steep snow and rock climbing.”

Summiting the final peak – Downs Mountain at the head of Torrey Valley – at 6 p.m., he began the descent to the east, when “a massive, ominous storm appeared out of nowhere over the Divide.”

“You can’t outrun a storm,” he says. “It was the most dangerous part of the quest, which is sad because I wasn’t even climbing.”

The last “big” day, July 27, was climbing Gannett Peak, on which his dad, Joe, accompanied him.

His mom, Karen Lee, backpacked along a portion of the climb.

“I’m so thankful for their support,” Eli says of his parents. “They were integral to my success. They gave moral support.”

They also received “pings” every 10 minutes from his satellite texting device, marking Eli’s progress and location.

“I couldn’t have done it without that,” he says. “All of that solo without any link to the outside world is too risky.”

The longest mileage day was climbing Wind River Peak, on July 31, which was a day with only one peak on the agenda, and although it had less elevation gain, it was a 30-mile trek.

Not only were his climbs marking a record, Eli was marking his own name in a few summit registers that hadn’t been signed in decades.

At Speerhead Pinnacle, “a really obscure peak south of Gannett,” on July 12, Eli was the first person in 10 years to summit the peak, according to the registry.

At Twin Peaks on July 20, he was struck by the history in the register that showed the signatures of climbers dating as far back as the peak’s ascent in 1930.

“There was 90 years of everyone signing it...” he says. “I was signing in the same books these people were pioneering.”

After six one- or two-night backpacking trips into the Winds, Eli had four peaks left; those left “stranded” out there on their own, having been unable to attach them into previous groupings – Grand Teton (which he soloed in just under 10 hours), Cloud Peak, Blacktooth Mountain and Francs Peak.

The last days trips were “just go get them done,” he says.

He was motivated not only by his own desire, but by the fact that there were others closing in on his aspiration.

Eli had completed two-thirds of the climbs when the Washington team started the same adventure. But Eli had college courses and exams to attend to, while they had wide open days with no other commitments but to climb, so they could make one continuous push.

Eli chose to skip two days of classes to finish the last three peaks – Cloud, Blacktooth and Francs, which was fortuitous because it all came down to those two days.

On Aug. 5, his parents and the family dog accompanied him to Francs Peak in the northern Absarokas.

“It’s the only one that is an actually easy mountain, which is why I saved it for last – the road was the most intense part of the whole thing.”

On that day, Eli summited the final peak, accomplishing his quest in 44 days, 5 hours and 22 minutes, earning him the honor of being the first person to climb all 13,000-foot peaks in one year, the youngest person – at age 19 – and the fourth to summit all the peaks.

Eric Gilbertson, one of the Washington climbers, finished on Aug. 7, in 16 days, 17 hours and 42 minutes.

“Congratulations to him, too, but I was first,” Eli laughs. “I didn’t need to be fastest...I just wanted to be some weird asterisk in some Wyoming history books.”

There have now been 49 recorded deaths of Wyoming coronavirus patients, including 12 announced this month — the most in a single month since the coronavirus began.

No staff members or teachers within the district have tested positive.

On the summit of Francs Peak, Eli Boardman, age 19, held the sign brought to the summit by his parents to commemorate the completion of his summer of climbing.

Climbing solo just below the summit of the class 5.4 Grand Teton – one of the hardest 13ers in Wyoming – Eli Boardman summited August 2. “It was exposed and somewhat challenging, but by far not the most dangerous. It was a good feeling to solo the Grand in just under 10 hours.”