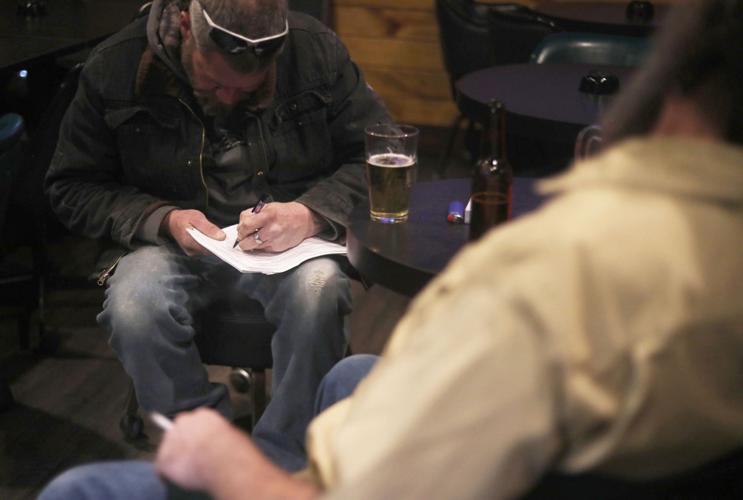 A man signs petitions to legalize medical marijuana and to decriminalize it statewide at Butch's Bar on Wednesday. According to a University of Wyoming study from a year ago, more than half of residents support legalizing marijuana for recreational use, and 85% are in favor of legalizing medical use. 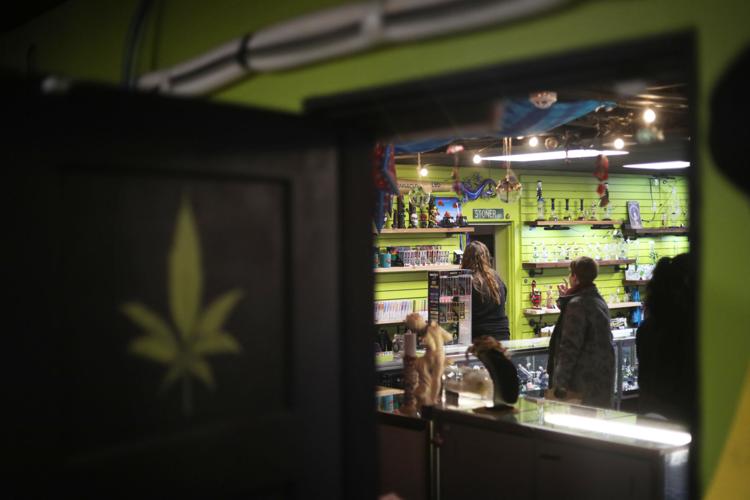 Customers shop for a variety of CBD, Delta-8, accessories and other items at Platte Hemp Co. on Wednesday. Owner Sam Watt is one of the key people leading the charge in legalizing medical marijuana and decriminalizing it in the state. 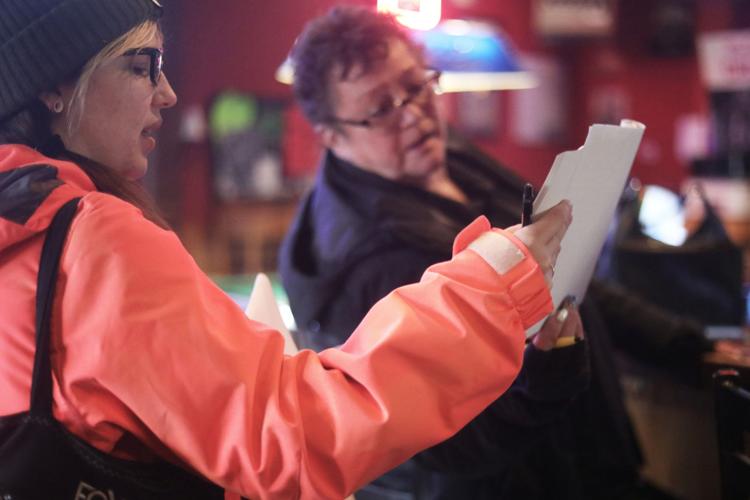 Keri Cantrell, who works at Platte Hemp Co., gathers signatures from Linda Sharp at Butch's Bar on Wednesday for petitions to legalize medical marijuana and to decriminalize it statewide. Sam Watt, the owner of Platte Hemp Co., sends his employees around Casper to gather signatures when it's slow in the store.

Two people bundled for the winter winds hurry into the neon green-walled back office of Platte Hemp, tossing thick paper packets into an open safe in the corner before rushing back out again. They’re going to The Fort Saloon next on this Wednesday afternoon, then they’ll head over to Butch’s Bar in Evansville after that.

The packets contain signatures collected for a pair of petitions, one to reduce penalties for marijuana-related crimes and another to legalize the drug for medical use. There are also copies on a table inside the entrance of the hemp store, with signs asking anyone who enters to add their name.

The petition carriers, who each have to be certified by the Secretary of State, have been gathering support for the initiatives since September. Sam Watt, owner of Platte Hemp, says he spends around $2,000 a month out of his own pockets — not the business’ — to employ a small team of people trying to get as many Hancocks on the petitions as possible.

According to a University of Wyoming study from a year ago, more than half of residents in the state support legalizing marijuana for recreational use, and 85% are in favor of legalizing medical use.

Wyoming is one of about a dozen remaining states where marijuana use and possession, besides low-THC hemp and CBD, are still entirely illegal.

But with several recent marijuana bills dying in the state legislature, organizers say that sending the matter to a public vote may be their best shot.

To get a measure on the ballot, Wyoming requires organizers to gather the number of signatures equal to 15% of votes cast in the last general election. Voter turnout was especially high in 2020 because of the contentious presidential election.

The signature requirement of 15% of the previous election’s votes is the highest in the country, according to Ballotpedia. And petitioners also need to secure signatures of 15% of the qualified voters in at least two-thirds, or 16, of Wyoming’s 23 counties.

Roughly 278,000 people voted in Wyoming’s 2020 general election, which means that the initiatives would need more than 41,000 signatures each.

Apollo Pazell, chief strategist for the national Libertarian Party, says they’re at roughly 30% of that number as the year comes to a close.

“Everything seems to be on pace,” Pazell said.

The approval process for the petition took longer than expected, he says, pushing their start to the fall and missing the lucrative summer season with its county fairs and myriad events.

They’re too far behind the goal to get the measures onto the 2022 ballot, Pazell said, so they’re aiming for the 2024 election. So far, the national Libertarian Party has spent around $20,000 on organizing the initiatives.

The tall hurdles that need to be cleared to get a ballot initiative passed in Wyoming make them an infrequent way of lawmaking.

“The ballot initiatives are not as common here as they are in other states,” said Ryan Frost, public information officer for the Legislative Service Office.

Number of significant bills fail without hearing in Wyoming Legislature

An 18-month window to collect signatures gives organizers until January 2023, before the start of that year’s legislative session, to gather support.

Once the signatures are collected, they have to be turned in to the secretary of state, whose office verifies each person and their address against the most recent voter logs. Signees must be Wyoming residents registered to vote with a current address.

Around 80% of the signatures collected by paid carriers so far are verified, Pazell said. The rate is slightly lower among volunteer carriers.

Most attempted ballot initiatives in recent history have failed, a report from the secretary of state shows. In 2016, Wyoming NORML spearheaded a medical cannabis legalization initiative that eventually fell short of the ballot.

Wyoming has not successfully passed a ballot initiative since 1991. In the years since, most attempts have failed to earn enough signatures. Those that were sent to the ballot failed, even when more people voted yes than no, since initiatives require a majority of the total votes cast in the election to pass.

But there’s not a total opposition to increasing leniency when it comes to marijuana in Wyoming. In 2015, the Legislature passed a bill that provided for deferred prosecution for first offenses of using or being under the influence of controlled substances, including marijuana.

The reception on the ground has been surprisingly positive, organizer Mario Presutti said, especially in smaller, more rural counties.

In Hot Springs County, it took them three days to collect the nearly 400 signatures needed. Kirby, a town of 76 in the county with 40 registered voters, has the highest signing rate yet. Sweetwater County has also hit its goal of 2,505, and counties including Uinta and Carbon are nearing completion according to Pazell.

Around 65% of Republicans asked have added their names to the petition, Presutti said.

This rate among Republicans “exceeded” their expectations, and Pazell partially attributed their success with Republicans to the medical freedom debate, a concept recently popularized thanks to the COVID-19 vaccine.

Many of the Republicans Presutti encountered reportedly said that limiting access to marijuana as a treatment is also seen as infringement on medical freedom, in the same way they think about COVID-19 vaccine mandates.

Support is even higher among those who self-identify as veterans, reportedly between 80 and 90% according to Pazell. Many of them are in favor of medical marijuana as a treatment for conditions including PTSD.

And while WASCOP, or the Wyoming Association of Sheriffs and Chiefs of Police, has lobbied against attempts to pass legalization in the legislature, Pazell says he’s spoken to individual officers that are in favor of at least decriminalizing the drug. Many of them decline to sign the petition even if they support it, Pazell said, because they’re worried about their employers finding out.

Watt said that some customers in his shop are also wary of signing for the same reason, though NORML intends to keep the signatures it collects confidential.

In Fremont County, Pazell said that concerns over jurisdiction, as both the Eastern Shoshone and Northern Arapaho tribes have made moves towards decriminalization, also gave signees a reason to support laws that would make enforcement more uniform across the state.

Most people sign both petitions, Presutti said, but they prioritize the medical initiative if needed. It has around 5% more signatures than the one aimed at reducing criminal penalties, according to Pazell.

“We think that the patients need to be first,” Pazell said. “This has proven to be an invaluable medication for so many patients…that is being withheld for political reasons.”

Decriminalizing or legalizing marijuana is not required to be a ballot initiative. If lawmakers choose, it could also be enacted by the Legislature.

During the 2021 legislative session, a pair of bipartisan bills — one that would have authorized a study on medical marijuana and another aimed at full legalization — died without a hearing in the House. Both passed out of the House Judiciary Committee by a 6-3 vote.

Advocates spoke of the millions in tax revenue that could be earned through legalization, hundreds of added jobs and the medical benefits of cannabis. The regulation that comes with it would also ensure people who did choose to use marijuana were using a safe product, they argued.

On the other side, opponents of both measures cited the continued criminalization of cannabis at the federal level, high costs of necessary infrastructure and concerns about the effects of THC especially in young people.

“We would prefer a legislative process,” Pazell said.

“The fundamentalist candidates have consistently taken a position against cannabis,” he said. “[There are] many more fundamentalist legislators in there now than there used to be.”

As surrounding states have legalized marijuana, Wyoming is becoming an island. Colorado has sold legal weed for nearly a decade, and Montana opened dispensaries to recreational customers on Jan. 1.

Watt said that most Wyoming residents he knows who buy marijuana are going out of state to do it, rather than taking their chances with local dealers. The regulation comes with standards for purity and a guarantee of safety, Watt said, and it’s generally easy to access just over the border.

But with those dollars going in other states’ pockets, Wyoming is losing the tax revenue from those purchases.

The 2021 general session bill that aimed to legalize marijuana proposed that a 30% excise tax be levied on the sale of retail marijuana and marijuana products as well as license fees associated with marijuana. Rep. Jared Olsen, R-Cheyenne, who sponsored that bill, estimated the state would earn around $50 million in taxes in its first year of legalization. It died in the first chamber.

Demand for legal hemp and CBD products is also high in the state — since opening Platte Hemp in Casper last year, Watt and his wife, Alicia, have expanded to three more locations in Rawlins, Gillette, and Sheridan (opening soon).

Most of their customers are in their forties or older, Watt said, and looking primarily for pain relief. If medical marijuana was legalized in Wyoming, he said their storefronts would look to start selling it.

New legislation would remove criminal penalties for most marijuana use or possession charges, and allow Wyomingites to grow a limited amount.

The bill would allow Wyoming doctors to recommend marijuana as treatment and would task the state’s liquor division with regulating its distribution.

CVS and Walgreens plan to offer the abortion pill

CVS and Walgreens plan to offer the abortion pill

Top 10 reasons drivers get pulled over

Top 10 reasons drivers get pulled over

Through the horror and desperation, rare scenes of redemption in Syria and Turkey

Through the horror and desperation, rare scenes of redemption in Syria and Turkey

A man signs petitions to legalize medical marijuana and to decriminalize it statewide at Butch's Bar on Wednesday. According to a University of Wyoming study from a year ago, more than half of residents support legalizing marijuana for recreational use, and 85% are in favor of legalizing medical use.

Customers shop for a variety of CBD, Delta-8, accessories and other items at Platte Hemp Co. on Wednesday. Owner Sam Watt is one of the key people leading the charge in legalizing medical marijuana and decriminalizing it in the state.

Keri Cantrell, who works at Platte Hemp Co., gathers signatures from Linda Sharp at Butch's Bar on Wednesday for petitions to legalize medical marijuana and to decriminalize it statewide. Sam Watt, the owner of Platte Hemp Co., sends his employees around Casper to gather signatures when it's slow in the store.