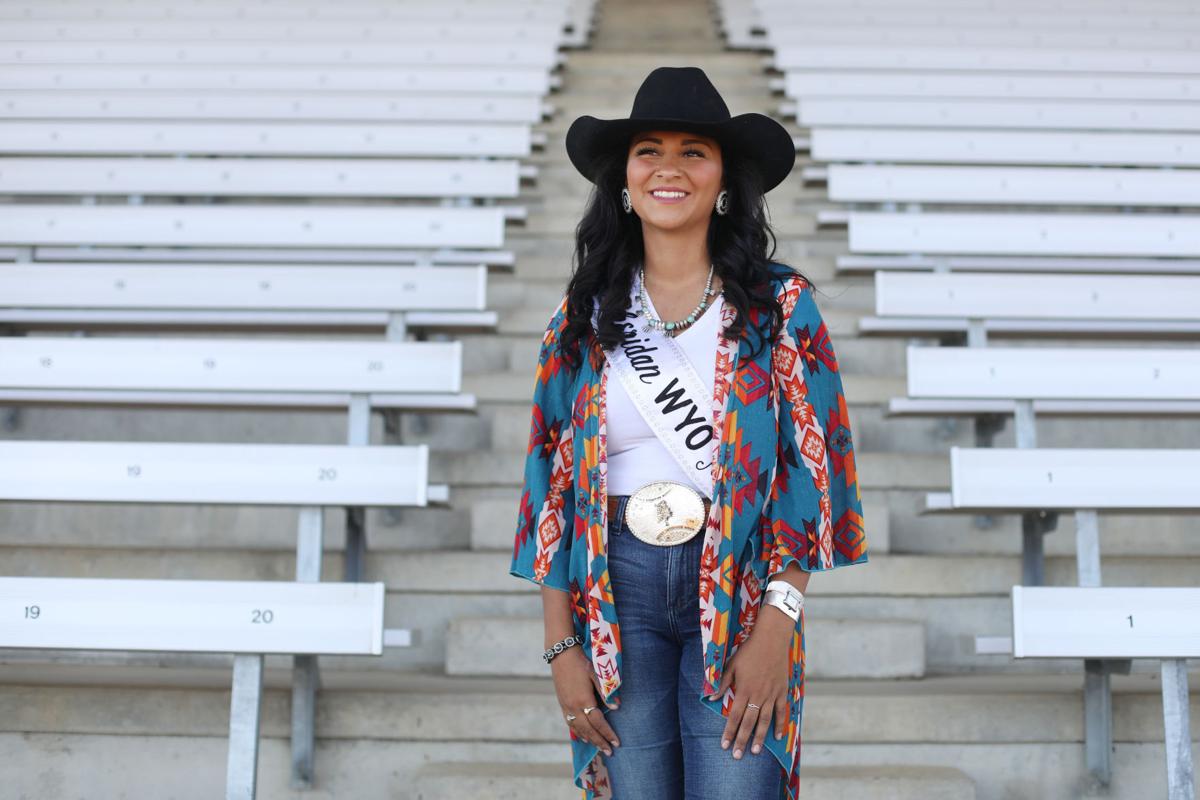 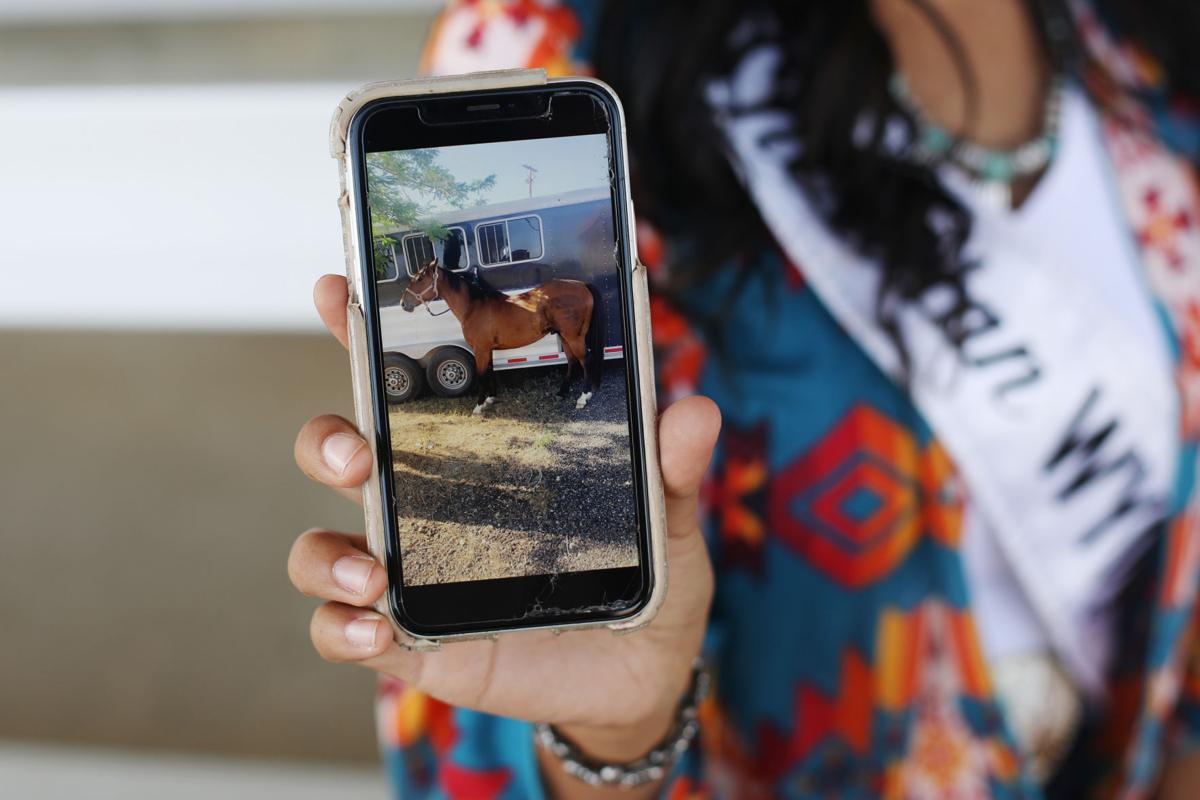 Shayla Conner holds up her phone with a photo of her horse Amos "Rango" at the Sheridan County Fairgounds Tuesday Sept. 7, 2021. 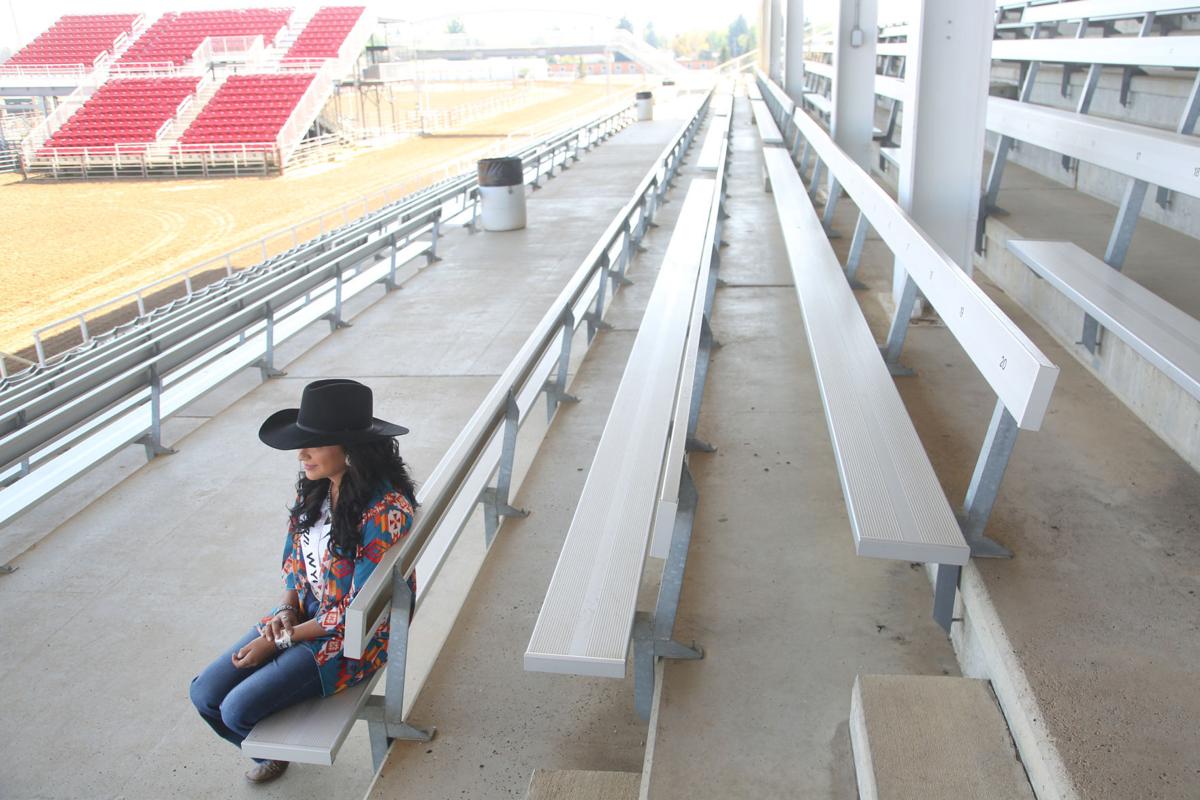 Shayla Conner sits in the stadium at the Sheridan County Fairgrounds Tuesday Sept. 7, 2021.

Conner, an enrolled member of the Northern Cheyenne Tribe, her family and the community mobilized. They marched, visited the Capital and strategized at family dinners.

After six years of lobbying, former Montana Gov. Steve Bullock signed Hanna’s Act into law in 2019, speeding up investigations and searches on the reservation with funding from the state’s justice department.

Conner, who now lives in Greybull, learned firsthand that raising awareness can lead to change. So when she decided to compete for Miss Sheridan WYO Rodeo Queen, she knew she wanted to advocate for missing and murdered Indigenous people.

And in a fate-sealing way, she earned the rodeo queen crown in 2019 — 61 years after her grandmother Carolyn Small Martin won the title, marking the third time an Indigenous woman has received the honor.

“My grandma ran in 1958, and they had an applause meter (to decide the winner),” Conner said. “You rode your horse, looked good, and if the crowd loves you, you got it. But nowadays, it’s more of a pageant-style. You have your speech, your interview, modeling and, of course, your talent and your horsemanship.”

But Conner has taken a different path than other rodeo queens. She chose to use her platform to bring attention to a difficult subject laced with uncomfortable truths: that Indigenous people go missing, and are murdered, at higher rates than the rest of the population, but often with considerably less attention.

“Wherever I went, I’d always put red handprints on (both) of my horses shoulders, then people would come up to me and ask ‘why did you put a red handprint on your horse?’” Conner said. “The red handprint symbolizes the missing and murdered Indigenous women. And I’m representing them by getting my story out, so people can hear what’s happening in my community.”

As the face of rodeo, queens are expected to interact and educate fans on all aspects of the sport. Looks are a part, but a queen isn’t afraid to get her hands dirty. Most importantly, the queen is a stellar representative of the city and Western culture overall.

“The pageant consists of modeling two outfits,” Conner said. “Elegant and then a classic or fashion forward. Then you do horsemanship as your talent. So you do a reining pattern, and then, for Sheridan, I did a freestyle pattern, meaning whatever I wanted to do.”

Judges and board members ask a range of questions: How many bones does a horse have? Who is the president of the Professional Rodeo Cowboys Association? What’s your stance on COVID-19?

There is a common misconception when it comes to rodeo competition, said Kerri Parr, president of the Sheridan Wyo Rodeo Royalty Board. From the outside, it appears the women are competing against one another. But in reality, they are really competing against the idea in each judge’s mind of what a rodeo queen actually is.

“And so it’s kind of impossible because you don’t know what’s in their mind,” Parr said.

While winning a rodeo pageantry is hard enough, queening itself, some say, is even more challenging. For Conner, even making time to get off her horse to drink water is challenging on rodeo nights.

Conner’s rodeo day might start between 4 a.m. and 6 a.m. with feeding and watering four different horses. She competes in slack, goes home, cleans up and gets dressed for the rodeo. She returns to the rodeo around 4 p.m., three hours before the evening portion kicks off.

“I get my horses saddled and paint (a red hand print on them to show solidarity with missing and murdered Indigenous peoples.) I go into the arena to do my flag sponsorship, leave the arena, and put my flag away, and I go back into the arena and do my queen wave.”

On top of that she has to return to the arena, retrieve her flag and stand in for Indian relays. She drops her flag off and clears up cattle. The rodeo ends around 10 p.m., but her day still isn’t over. She has to gather her horses and put them in the barn. By the time she gets to bed it’s 1 a.m.

Native Americans have a long history of participating in the Sheridan rodeo. The Crow and the Northern Cheyenne participated in Native American pageants, but were later relegated to vaudevillian acts. It wasn’t until 1951 that a Crow Tribal member, Lucy Yellow Mule, was selected as rodeo queen.

She was the first Ingigenous person to earn the honor. Connor’s grandmother was the second. And now Conner holds the title.

Parr has been involved with competitions long enough to know when a competitor has something special about them. Conner is a confident speaker, comfortable on stage and can ride, Parr noted.

“She’s very much a rodeo Queen with a lot of substance,” Parr said. “And when she came to us with the idea of raising awareness for missing and murdered Indigenous people — because it was very personal to her and her tribe — we were like, ‘That is perfect.’”

The rodeo community has embraced her as well. Over the summer, the Sheridan Rodeo dedicated Saturday night to raising awareness for missing and murdered Indigenous people.

“The flag girls helped me by putting red handprints on their horses; it was really sweet,” Conner said. “But in the past two years, being Miss Sheridan, I’ve seen a lot of change. More people of color coming into the higher level (Professional Rodeo Cowboys Association.)”

In Wyoming, Indigenous people make up 3% of the state’s population. But they account for 14% of missing persons and 21% of total homicide victims in the state, according to a January report by the Wyoming Missing and Murdered Indigenous Persons Task Force.

In Montana, nearly 6,000 Indigenous people were reported missing between 2017 — 2019, and nearly 80% were under the age of 18, according to a Montana Department of Justice analysis.

“This report was really eye-opening, but I think it confirmed what a lot of us knew already that was happening out there,” Sen. Affie Ellis — a Cheyenne Republican, citizen of the Navajo Nation and co-chair of the Legislature’s Select Committee on Tribal Affairs — said at the time.

And that issue has been clearly apparent with the recent disappearance and murder of Gabby Petito, a white woman from Florida. Petito went missing at Grand Teton National Park while on a road trip with her boyfriend, touching off a social media frenzy and extensive media coverage. In the aftermath, commentators noted that more than 700 Indigenous women had gone missing in Wyoming over the past decade while receiving only a fraction of the attention.

The issue is a longstanding one, dating back to first-contact with Europeans. And many argue that pop culture and a dated sense of history, portraying the lives of Sacagewa or Pocahontas as joyful or filled with love, give air to the belief that Indigenous lives don’t matter.

Conner believes using her platform to talk about missing and murdered Indigenous people can lead to something bigger.

“Just by being Miss Sheridan, I’ve seen a lot of change in the past two years,” Conner said. “There’s been more people of color coming into the higher ranks of the PRCA and that’s been super fun to (experience), and I get to talk to them about it.”

And the tide has been slowly turning in the rodeo queen world. In 2016, two Indigenous women won rodeo titles in South Dakota, Soni Clifford and Staci Trehern, in New Mexico. Now, Parr and Conner hope the trend keeps on going.

Conner placed second runner-up for Miss Rodeo Wyoming earlier this summer, and she plans to now take a break from competing in the pageantry circuit. But rodeo and raising awareness for the Missing and Murdered Indigenous Peoples movement is still in her future. So is diversifying the rodeo and pageantry ranks.

The largest living thing on earth is edible and underground

The largest living thing on earth is edible and underground

An anti-mandate bill proposed by Rep. Chuck Gray, R-Casper, would include civil fines of $500,000 and criminal penalties.

Rep. Liz Cheney raised $1.7 million this summer, exceeded only by the $1.9 million she collected in the previous quarter.

Some of Trump's biggest donors have started to give to Hageman including Wyoming businessman Timothy Mellon. 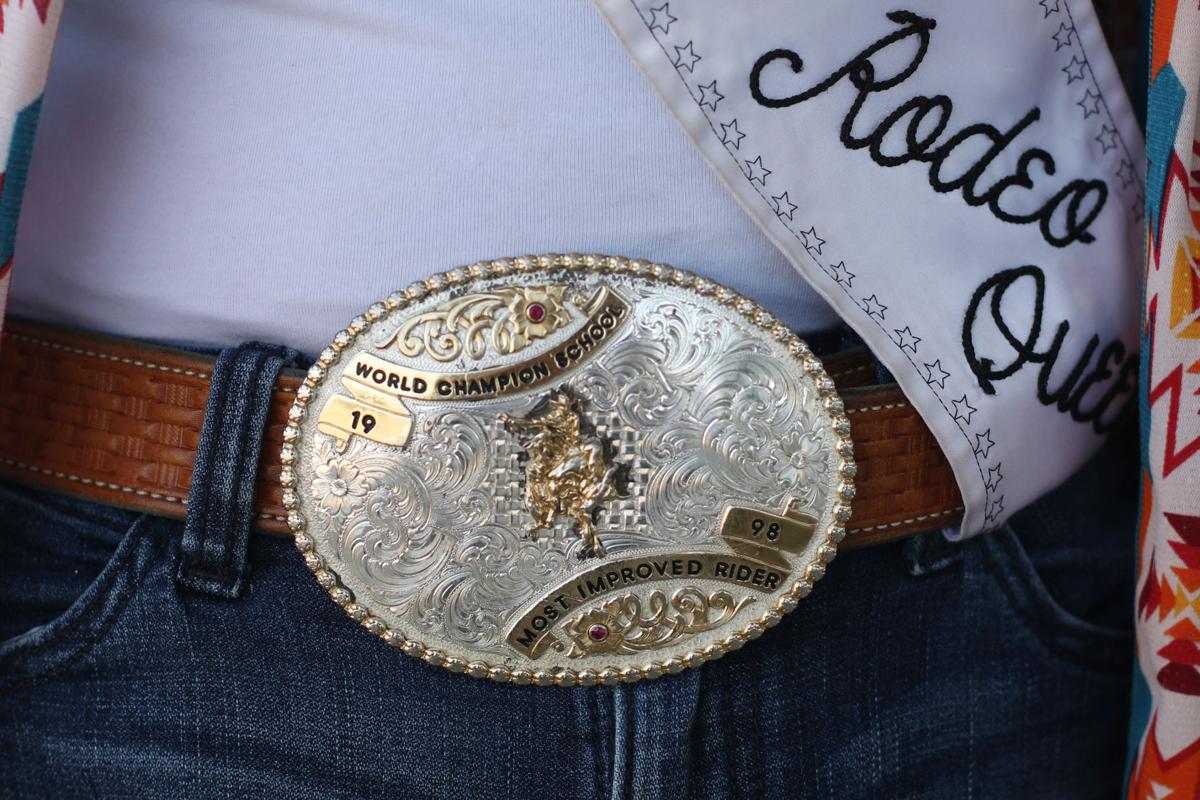 Shayla Conner wears her father's 1998 belt buckle from his time competing in roughstock. Conner has a deep family history with rodeo: Her grandmother is also a former rodeo queen. 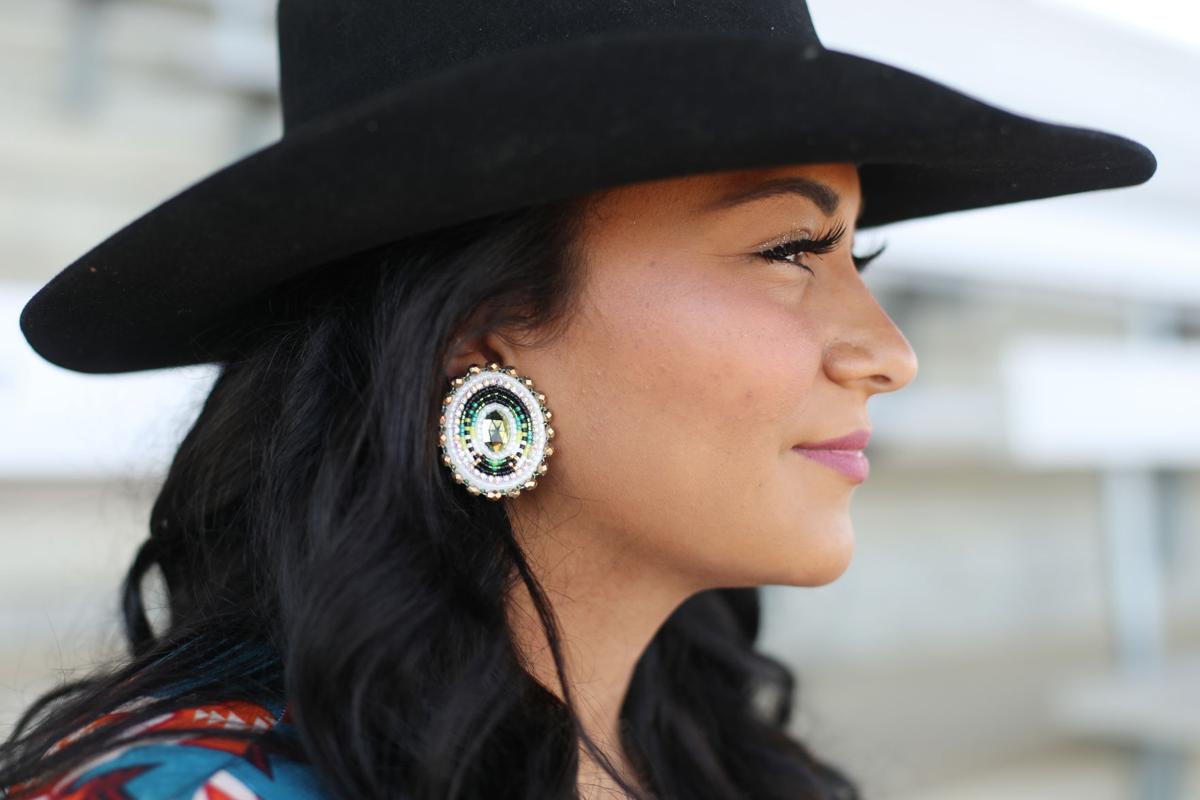 Shayla Conner wears beaded earrings made by her aunt on Sept. 7 in Sheridan. Conner is an enrolled member of the Northern Cheyenne Tribe. 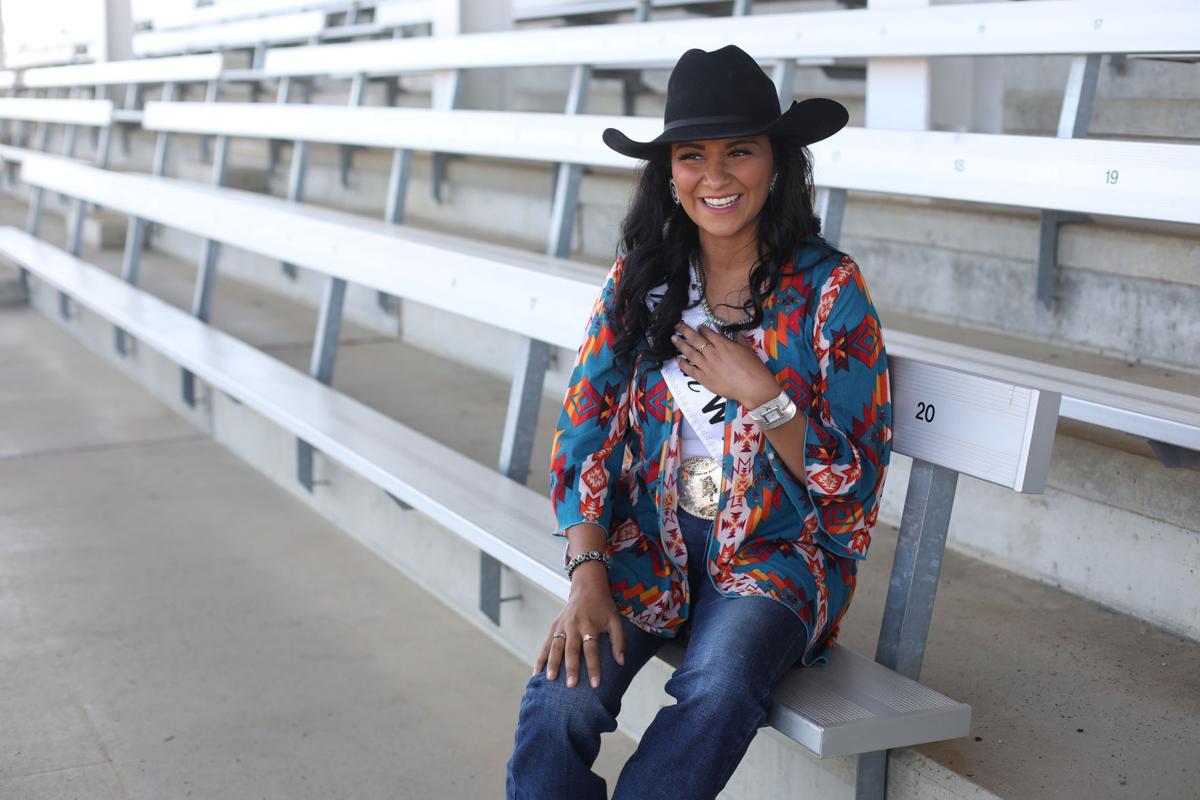 Shayla Conner laughs as she remembers a time competing in the rodeo pageant at the Sheridan County Fairgrounds. Conner became rodeo queen 62 years after her grandmother held the title.

Shayla Conner holds up her phone with a photo of her horse Amos "Rango" at the Sheridan County Fairgounds Tuesday Sept. 7, 2021.

Shayla Conner sits in the stadium at the Sheridan County Fairgrounds Tuesday Sept. 7, 2021.