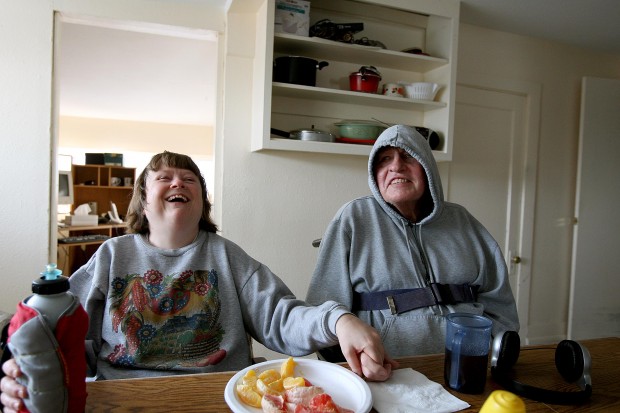 Abbie and Bill Taylor laugh recently in their Sheridan home while discussing their marriage and Abbie’s new poetry book, ‘How to Build a Better Mousetrap.’ The book addresses Abbie’s role as Bill’s caregiver since Bill suffered two strokes in 2006 and 2007. 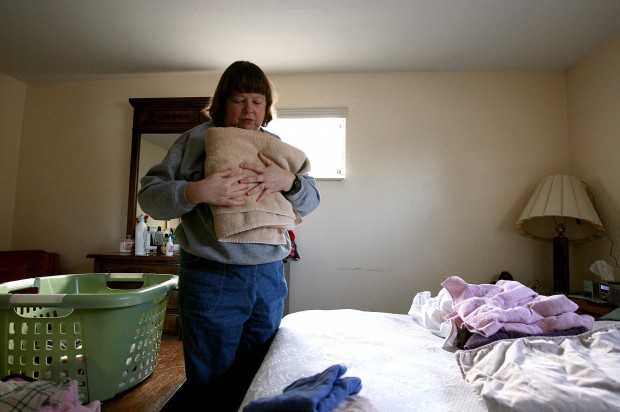 Abbie Taylor folds laundry recently in her Sheridan home. Since her husband’s strokes in 2006 and 2007, Abbie has taken over the family chores. 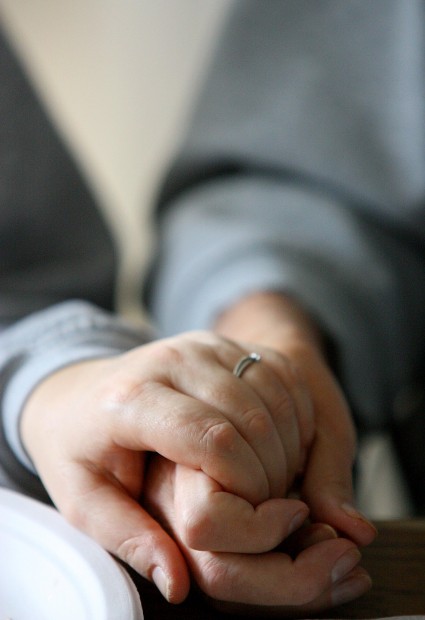 Abbie and Bill Taylor hold hands. The two married in 2005 in the backyard of Abbie’s grandmother’s house. 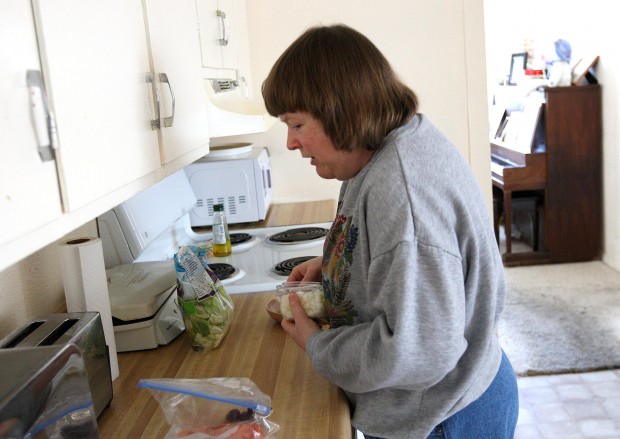 Abbie Taylor prepares lunch for her husband, Bill, recently in their Sheridan home.

he’s still the man I love.

— Abbie Johnson Taylor, “How to Build a Better Mousetrap: Recollections and Reflections of a Family Caregiver”

They met through Newsreel Magazine, an audio cassette publication for the blind and visually impaired.

Subscribers use the magazine as a forum to share ideas, and one day Abbie Johnson posted a question about computers. Bill Taylor, who owned a computer store in Fowler, Colo., responded.

They emailed back and forth daily. Bill sent Abbie a cassette of love songs and another that included different versions of his favorite tune, “Stormy Weather.” She mailed him tapes of herself singing.

“He likes to say he fell in love with my voice,” Abbie said.

Abbie’s 50, a full-time writer in Sheridan. She used to work as an activities assistant in a nursing home. Bill’s 69, retired. He’s the subject of Abbie’s new book, “How to Build a Better Mousetrap.”

She wrote the poems because Bill was all she could think about after his stroke. She published them because that’s all he wanted for Christmas.

The book’s title came from a senior center caseworker. Caregiving was like building a better mousetrap, she said, always searching for a different way to do things. In the six years Abbie has cared for Bill, that’s been their life: finding new solutions to what were once everyday tasks.

Abbie and Bill met in person for the first time in April 2004, two years after they started talking. Abbie and her dad were driving to New Mexico to visit Abbie’s brother. Fowler wasn’t too far out of the way.

They met again at Christmastime. When Abbie’s dad was in the bathroom, Bill asked Abbie for a kiss under the mistletoe. She thought he was joking and said no.

Later, Abbie’s dad told her he thought Bill was interested in marrying her. No way, she said.

Legally blind since birth, she could see people, but not their facial expressions. She couldn’t see the way Bill was looking at her the way her father had.

“I didn’t listen to him,” she said. “People who can see can pick up on how other people look at you. If somebody looks at you with love, you can tell.”

A month later, Bill wrote Abbie a letter in braille, asking for her hand.

She was so shocked she threw it away. How could she leave her home, where she lived for decades, to be with a man she met twice in a place she didn’t know?

“[It] was just totally too scary,” Abbie said.

Bill persisted. He said he’d move to Sheridan for her and came to visit. He formally proposed at a dinner with family and friends.

When Bill left to go back home, they kissed in the rain. Abbie hoped the bus would leave without him, leaving him with her for good.

One September day in 2005, Abbie walked down the aisle in her grandmother’s backyard. A violinist and cellist played. Bill held out his hand.

They promised to love each other, in good times and bad.

Abbie spent the first months of their marriage writing thank-you cards. Bill, who lost his vision completely eight years ago, would sit at the computer in the dining room and listen for Abbie. He’d grab her when she came by and pull her onto his lap. He’d kiss her earlobes and serenade her.

Three months after the wedding, Abbie came home to find Bill on the dining room floor. A fallen chair lay on top of him. His arm reached out for the telephone. Bill was conscious, but Abbie couldn’t understand what he was saying.

Doctors life-flighted Bill to Billings, Mont., for surgery. A cerebral hemorrhage on the right side of his brain caused a stroke.

Abbie felt optimistic. At first doctors said Bill could participate in a rehabilitation program. But he was too weak and went to a Sheridan nursing home for nine months instead.

He cried to Abbie: “I owe you a million kisses.”

Abbie tried to occupy herself. She went to a birthday party for a friend’s little girl. As the girl opened presents, Abbie tried not to cry.

A speech therapist told Abbie to sing with Bill, to help improve his speech. She’d done that with the residents in the nursing home before.

“But it’s harder with somebody you love,” Abbie said. “It was hard hearing him try to intone the words to his favorite songs.”

Abbie started taking a writing class the week Bill came home. She needed an outlet, something to take her mind off things.

She wrote poems about the stroke, how much she missed Bill when he was at the nursing home, waking at 3 a.m. to help him go to the bathroom.

Then, a year later, a second cerebral bleed.

I believe that some day, you’ll walk through the door,

take me in your arms, hold me.

I’ll live for that day.

Bill did not recover from his second stroke, and therapy was discontinued. Today Bill is paralyzed on his left side and uses a wheelchair.

An occupational therapist taught Bill what he could do to maintain the strength he had. She came to the house and showed Abbie how to get Bill dressed and transfer him from place to place.

A carpenter widened the bathroom door so Bill could wheel inside and put up metal poles in the bathroom, bedroom and living room for Bill to hold on to.

Because Abbie can’t see, she uses her hands to line up Bill’s wheelchair with the bed or an easy chair. She helps him stand, then Bill grabs the pole and Abbie helps him swivel.

In the beginning, Abbie sometimes misjudged the distance between bed and chair, and Bill would fall. The paramedics would have to come and lift him from the floor.

“This stuff is easier when you have two good eyes,” she said.

Someone from the senior center comes three times a week to help Bill bathe. Bill used to be the cook of the family. Now Abbie does it. She does the laundry, too.

“It’s got to be frustrating for him to only be able to do a few things,” Abbie said. “He’s always saying, ‘I wish I could help, I wish I could do the cooking.’”

Bill reached out for her hand.

“She’s a wonderful girl,” he said.

Through everything, Abbie wrote.

She’d been trying to get a publisher to pick up her poems with no luck when Bill said he wanted her book as a Christmas gift.

She self-published her poetry and put a text-to-speech version on Bill’s reading device so he could listen.

Abbie’s poems tell stories of family caregiving, aging, childhood memories, her relationship with Bill. With her book, Abbie wants other caregivers to know they’re not alone.

At times, I ask myself, “Why am I doing this?

“Why don’t I put him in a home and go about my business?”

In answer, he tells me he loves me,

fails to kiss me again through his laughter.

Our lives are still worthwhile.

Abbie said she’s lucky. There are others in much worse condition — loved ones who wander, confused, who don’t know who they are. Bill is still Bill. He can’t cook, but he can use his hand to wipe the table after dinner.

He can’t pull her onto his lap and kiss her ears.

Now, I hold him in the darkness of our bedroom and whisper, “I’ve got a man.”

Sheridan author Abbie Johnson Taylor will read from her poetry book, "How to Build a Better Mousetrap: Recollections and Reflections of a Family Caregiver," noon to 2 p.m. Feb. 12 at the Sheridan County Fulmer Public Library's Inner Circle.

For more on Abbie, visit www.abbiejohnsontaylor.com.

Teachers lead talks on Floyd case in US classrooms

Teachers lead talks on Floyd case in US classrooms

The mauling victim had been recovering from surgery at the Eastern Idaho Regional Medical Center in Idaho Falls when he suffered a massive stroke and died.

From now until the end of the year, Wiggins Construction is offering a free AR-15 rifle with every new home or commercial roof.

After conviction in Minnesota, Wyoming activists say there's more work to be done

“The verdict still means that George Floyd was murdered,” said Illyanna Saucedo of the Laramie Human Rights Network. “It’s better than Chauvin being acquitted, but that is a pretty low bar for seeking justice.”

With Monday's update, there are fewer than 200 active confirmed cases in Wyoming for the first time since June 17.

Community members are speaking out after a Wyoming school board voted to defy state public health orders mandating masks in schools.

Abbie and Bill Taylor laugh recently in their Sheridan home while discussing their marriage and Abbie’s new poetry book, ‘How to Build a Better Mousetrap.’ The book addresses Abbie’s role as Bill’s caregiver since Bill suffered two strokes in 2006 and 2007.

Abbie Taylor folds laundry recently in her Sheridan home. Since her husband’s strokes in 2006 and 2007, Abbie has taken over the family chores.

Abbie and Bill Taylor hold hands. The two married in 2005 in the backyard of Abbie’s grandmother’s house.

Abbie Taylor prepares lunch for her husband, Bill, recently in their Sheridan home.