Wildfire in southern Wyoming swells to estimated 80,000 acres, though officials expect Laramie to be safe
View Comments
Share this
{{featured_button_text}}
1 of 2 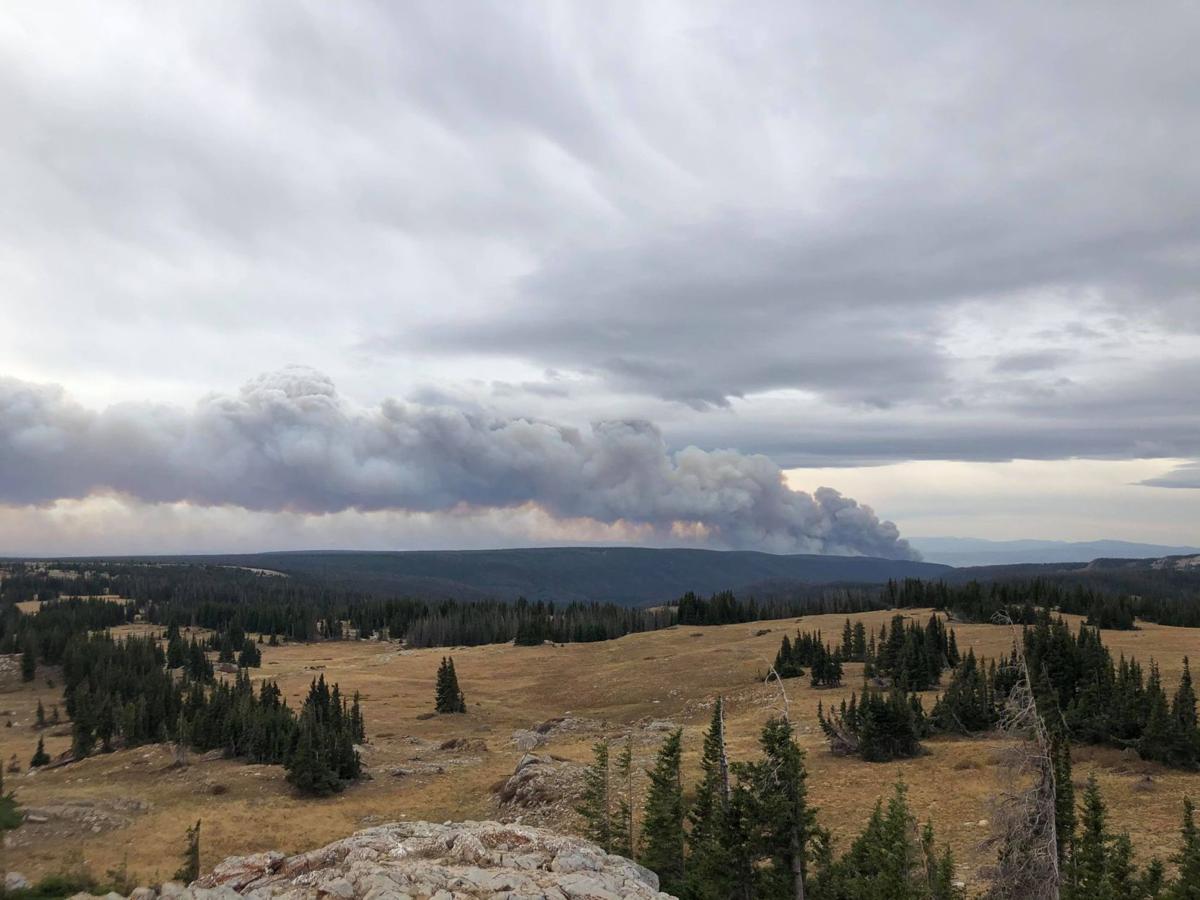 The Mullen Fire is seen Saturday afternoon from near Highway 130. 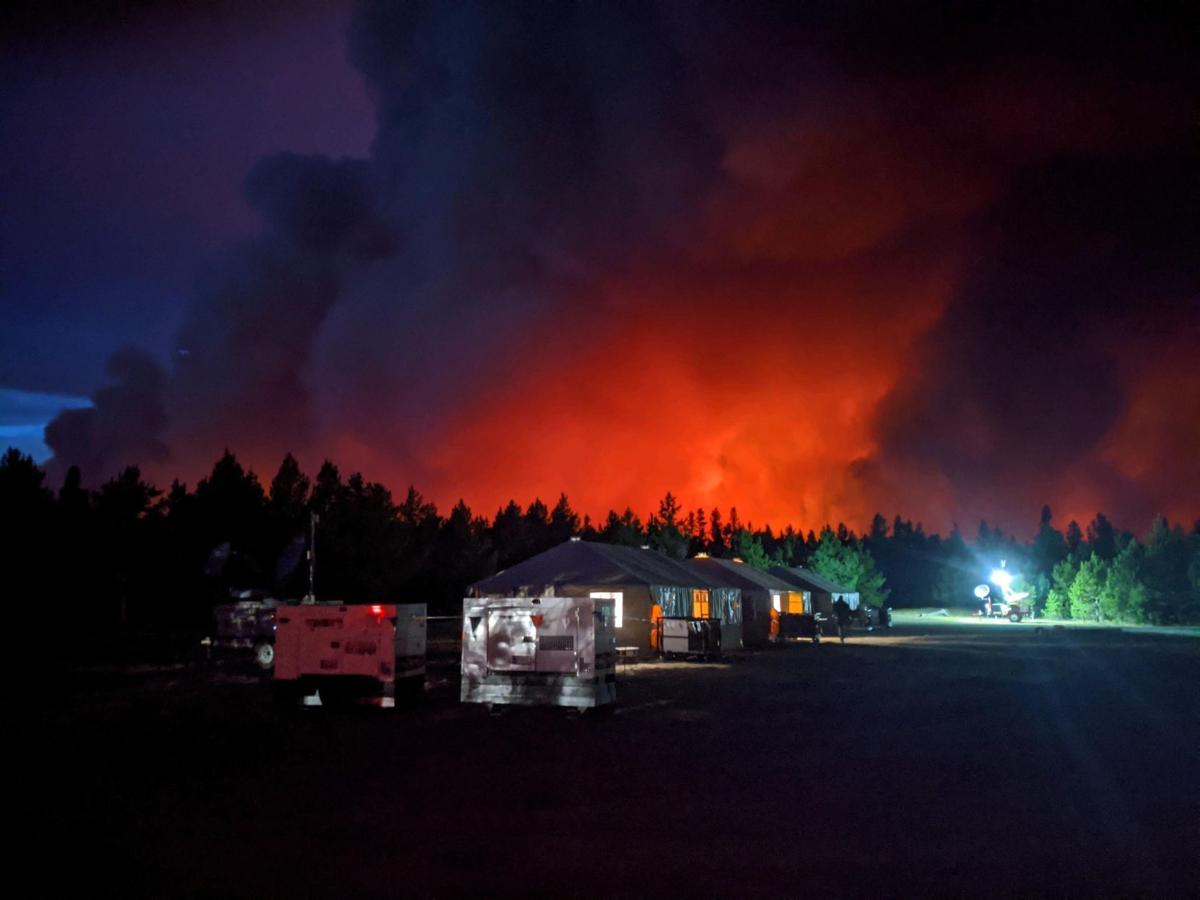 The Mullen Fire has grown to an estimated 80,000 acres — more than twice the size reported Friday night — as of Saturday afternoon, Gov. Mark Gordon tweeted.

Strong winds helped to spread the swelling wildfire in southern Wyoming as authorities ordered new evacuations and closures. Gordon said there had not yet been any confirmed structure losses.

In a community Q&A held virtually Saturday evening, Rocky Mountain Incident Management Team officials said the fire was at 69,138 acres according to their most recent perimeter map but that the fire had grown substantially since then. No firefighters have yet been injured.

“All bets are off with this fire,” Operations Section Chief Chris Zoller said. “People ask all the time, ‘Is Laramie safe?’ Yes, I believe Laramie is safe. But will this fire travel out into the prairie and sage brush? Definitely. You put 70 mph behind any kind of fire, it’s going to eat anything that it can and continue to move across that landscape.”

Zoller said officials didn’t have enough manpower yet to begin evaluating specific subdivisions. He did say conditions looked good over the next few days for the town of Centennial to avoid the fire, though it is “not out of the woods” yet, he said.

He said the recent growth has stretched the fire teams’ resources “extremely thin.”

Officials said they expect the fire to be a long-term problem, calling to mind the Beaver Creek Fire in 2016 and the Ryan Fire in 2018.

“We’re, unfortunately, going to have to prepare for this Mullen Fire to be a similar situation,” Forest Supervisor Russ Bacon said.

A mandatory full evacuation is in place for areas near Sheep Mountain to Lake Hattie Reservoir and north of Highway 230, the National Weather Service in Cheyenne tweeted Saturday afternoon. Evacuees should take Highway 230 and travel east or take Big Hollow Road to Highway 130 and go east. The Albany County Sheriff’s Office announced evacuations Saturday for those on Highway 11 along Sheep Mountain, from Fox Creek Road north to Hecht Creek, as well as the Wold, Beehive, Graham, Mountain Home and adjacent areas.

The fire had reached almost 36,000 acres on Friday amid winds that reached speeds of 50 mph, according to a Rocky Mountain Incident Management Team statement.

“Conditions have limited aircraft use in the area, and high winds and poor visibility are expected to limit aerial operations again today,” Gordon said in his tweet.

The Mullen Fire is now estimated at more than 80,000 acres. The red dots on the attached map are thermal hot spots detected by satellite. Conditions have limited aircraft use in the area, and high winds and poor visibility are expected to limit aerial operations again today. pic.twitter.com/ZOzXwX1lwM

More than 450 personnel have been assigned to the fire, the governor said, including air tankers, two Super Scooper aircraft and six helicopters.

Gordon said that Woods Landing and Jelm are still the areas of critical concern, and evacuations are in place for everything from Albany south to Fox Park.

Rep. Liz Cheney also tweeted Saturday afternoon that the fire was estimated to be 80,000 acres.

The national fire database InciWeb had not yet updated its acreage Saturday as of 6 p.m.

Temperatures in the area are expected to fall Sunday, and humidity is expected to rise as well. However, more dry, warm and windy weather is forecast for next week, with the humidity potentially dropping back into the teens on Tuesday.

Across Wyoming’s southern border, the Larimer County Sheriff’s Office issued a voluntary evacuation order Saturday for the northwest part of the county.

Zoller, the operations section chief, said he didn’t expect the fire to connect with the Cameron Peak fire burning in northern Colorado.

“That would be quite a big fire,” he said. “but I’m not going to rule anything out of possibility. I don’t think it will get out there, but 70 mph winds is a lot of winds.”

Due to #MullenFire_WY evacuations, the following highways are closed:
WYO 11 between the WYO 130 interchange and the town of Albany.
WYO 230 between the Colorado state line and Woods Landing
More information about evacuations can be found here: https://t.co/vzXSalsH1U #wyoroad pic.twitter.com/owcis6EKHG

“The subdivisions of Keystone and Lake Creek were impacted by the fire,” the statement said. “Firefighters were able to access areas after the flaming front passed and continued to perform structure protection actions.”

No information about damage was available. Fire officials said crews were aggressively working to protect structures.

Powerful winds continued to blow on Saturday, causing the blaze to spread again. Meanwhile, hazy conditions were reported in Laramie and Cheyenne due to the smoke plume, and smoke has reportedly spread to Colorado and Nebraska.

The fire was 2% contained as of Saturday morning. Authorities suspect humans caused it.

The Mullen Fire is seen Saturday afternoon from near Highway 130.