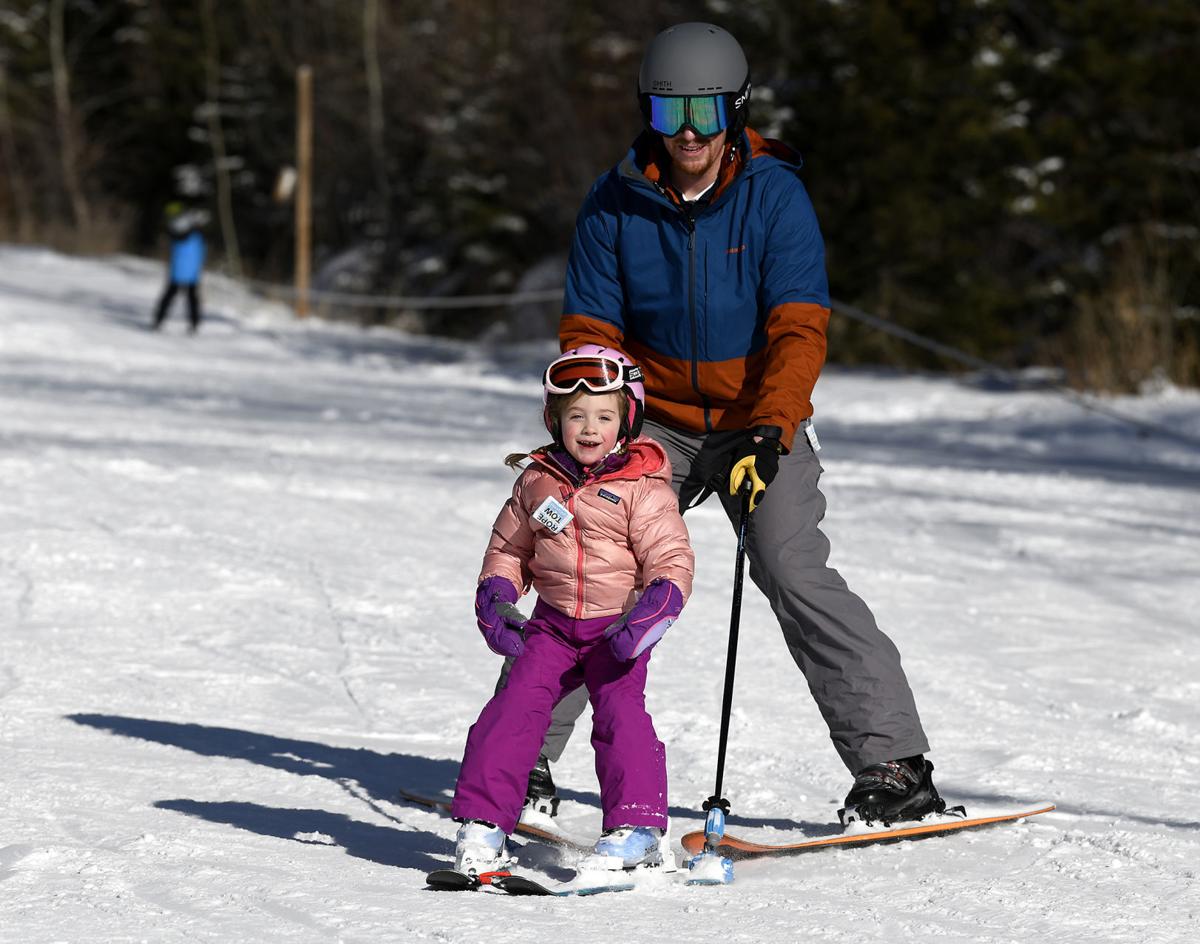 Ty Owens helps his 3-year-old daughter Natalie down the beginners' slope at Snowbowl on Thursday. Owens said it was his daughter's second year on skis. 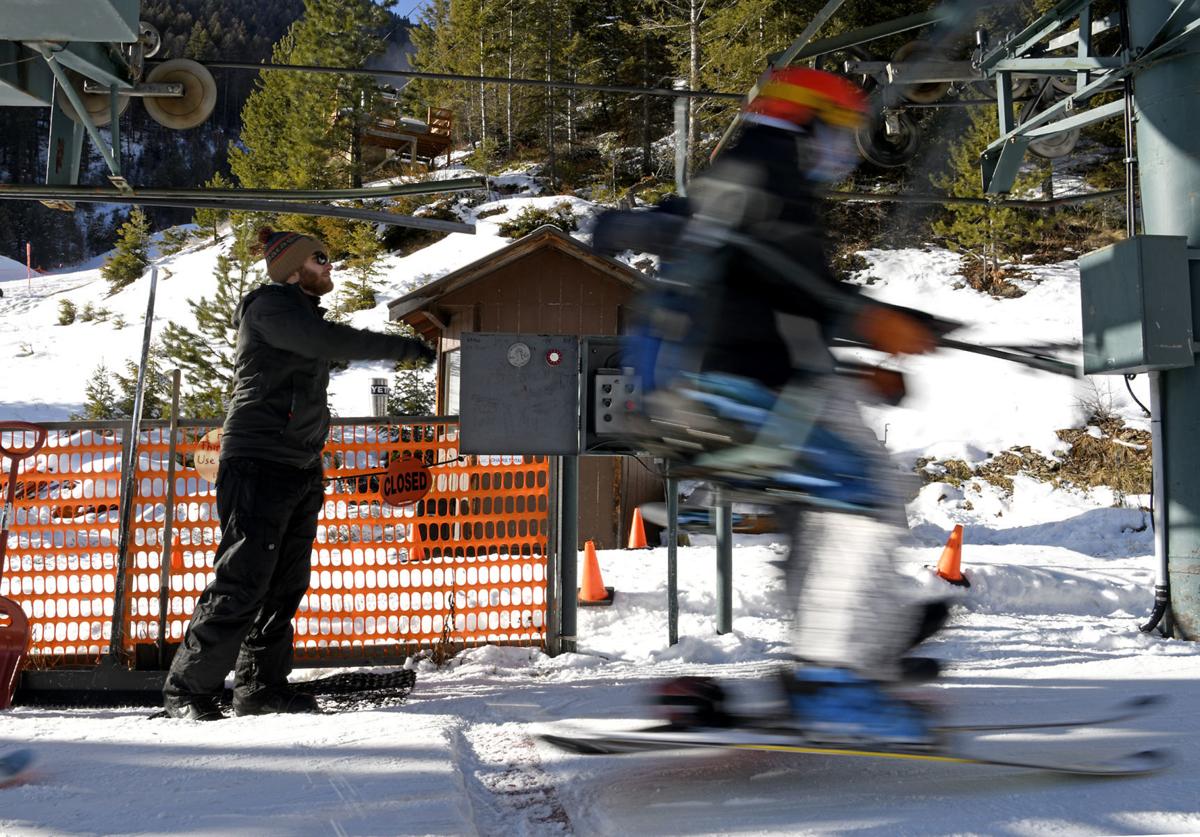 Paul Hawkins loads skiers onto the Grizzly Chair at Snowbowl on Thursday. Ski areas around western Montana have opened, but most are still needing a good storm to cover all their terrain.

At Snowbowl just outside Missoula, only 45 percent of the mountain’s terrain was open one day after Christmas. The top of the mountain is on a good pace for the year with 38 inches of snow, but the coverage thins out quickly en route to the base lodge.

“The snow was really nice up top,” said Andrew Hagameier while standing in the chair lift line. “It’s a little sparse on the way down but I’ve been coming up here for a long, long time — it’s been worse.”

Hagameier’s optimism is very much shared by others on the hill who hope the turn of the New Year will bring some much-needed powder. Andy Morris, whose family owns Snowbowl, said Thursday the mountain has had its share of challenges so far this year, including a lightning strike in the fall that hurt operators’ ability to get the snow-making machines running early.

“Somewhere along the power lines or something, we had a lightning event,” he said. “It toasted the drive for the Grizzly lift, so we had to replace that this fall.”

The lightning strike also zapped two water pumps, one at the base of the mountain that feeds runoff to an upper reservoir, and another one at the upper reservoir that pumps it up near the Spartan run. The Snowbowl operators had to replace the motor and the drive for the lower pump and repair some electrical issues.

“That was a setback for us as far as our snow making,” he said. “It’s been a challenge for us this year, but we’ve got everything going now.”

Snowbowl isn’t alone in its limitations. Discovery Ski Area near Philipsburg had opened 30 percent of its terrain on Thursday, while Lost Trail Ski Area south of Hamilton was 35 percent open. Lookout Pass on the Idaho border off Interstate 90 had three of its four lifts running on Thursday, but the mountain hasn’t seen any new snow in a few days.

“It’s not a typical start. It was late to get going,” said Lookout marketing director Matt Sawyer. “But the slopes are in pretty good condition. People are happy with the groomers.”

The National Weather Service is calling for a few inches of fresh snow to fall at Lookout in the coming week. Lookout does not use snow-making machines, so Sawyer hopes the new layer will land in time for the Torchlight Parade on New Year’s Eve.

“We’re ready … ,” he said in a phone interview on Thursday. “Old Man Winter just has to wake up.”

At Snowbowl, Morris agrees: It feels like the mountain is just one big storm away from better coverage all around the terrain. For right now, “early season” skiing is just the hand that’s been dealt.

“Early season, you’re really getting the die-hards picking up their passes, taking some runs and hitting the bar,” Morris said. “We’ll see how the rest of this Christmas week goes. It doesn’t take much, just a little snow and we can start shaping things up.”

Principals at all Douglas schools have been calling the parents direct and certified letters are sent out to parents who have balances of $75 or higher.

Michael Wilder, 51, died of cardiac arrest at the scene of a fatal vehicle crash in Sweetwater County.

Authorities say Akin surrendered to police in Powell, and officers found Rivera dead in the trunk of his car.

The loss of mining jobs contributed to a 10.3 percent decrease in weekly earnings for Cheyenne’s private sector employees.

At the age of 20, Casper’s Kevin Millburn will be prowling the halls of the Wyoming Capitol for a cause he strongly supports: access to higher education.

Ty Owens helps his 3-year-old daughter Natalie down the beginners' slope at Snowbowl on Thursday. Owens said it was his daughter's second year on skis.

Paul Hawkins loads skiers onto the Grizzly Chair at Snowbowl on Thursday. Ski areas around western Montana have opened, but most are still needing a good storm to cover all their terrain.