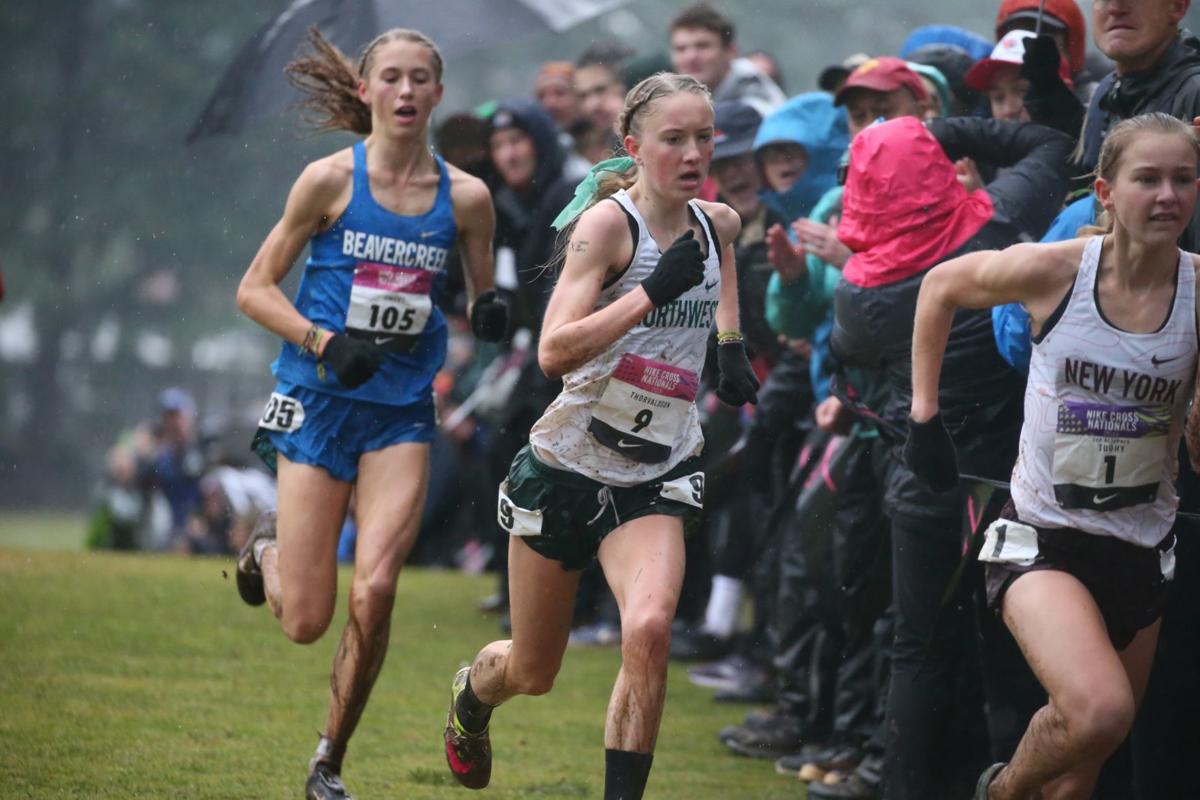 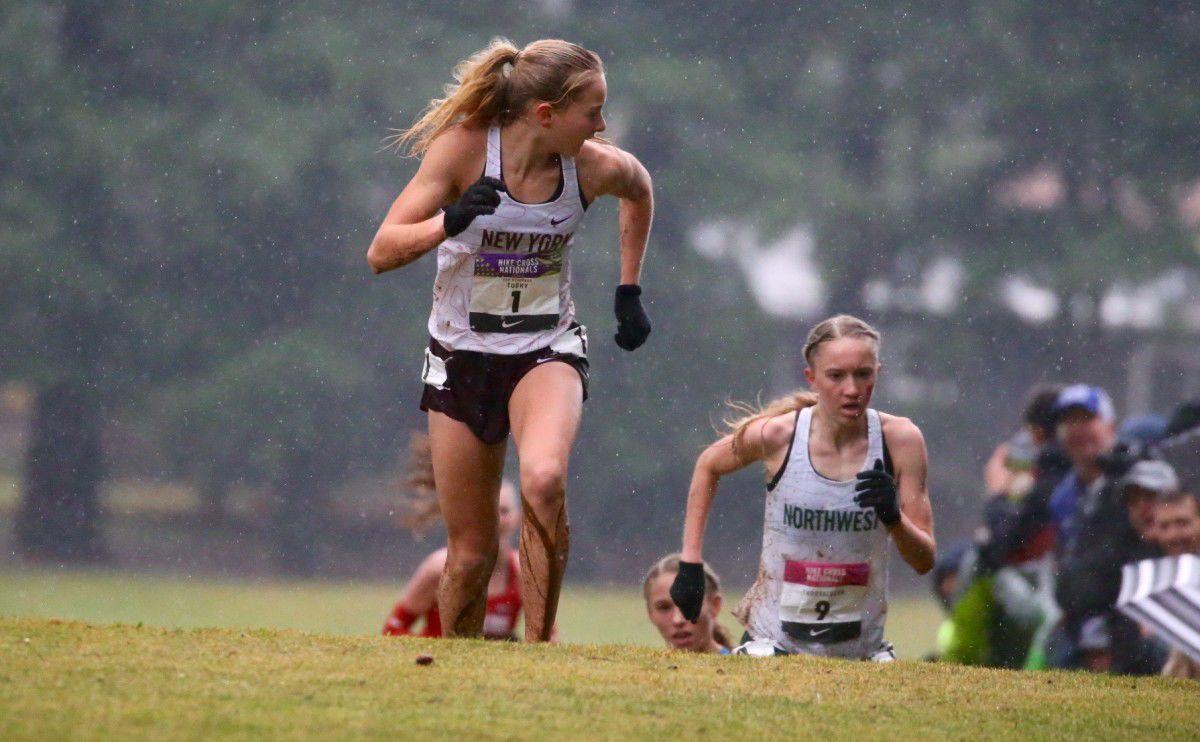 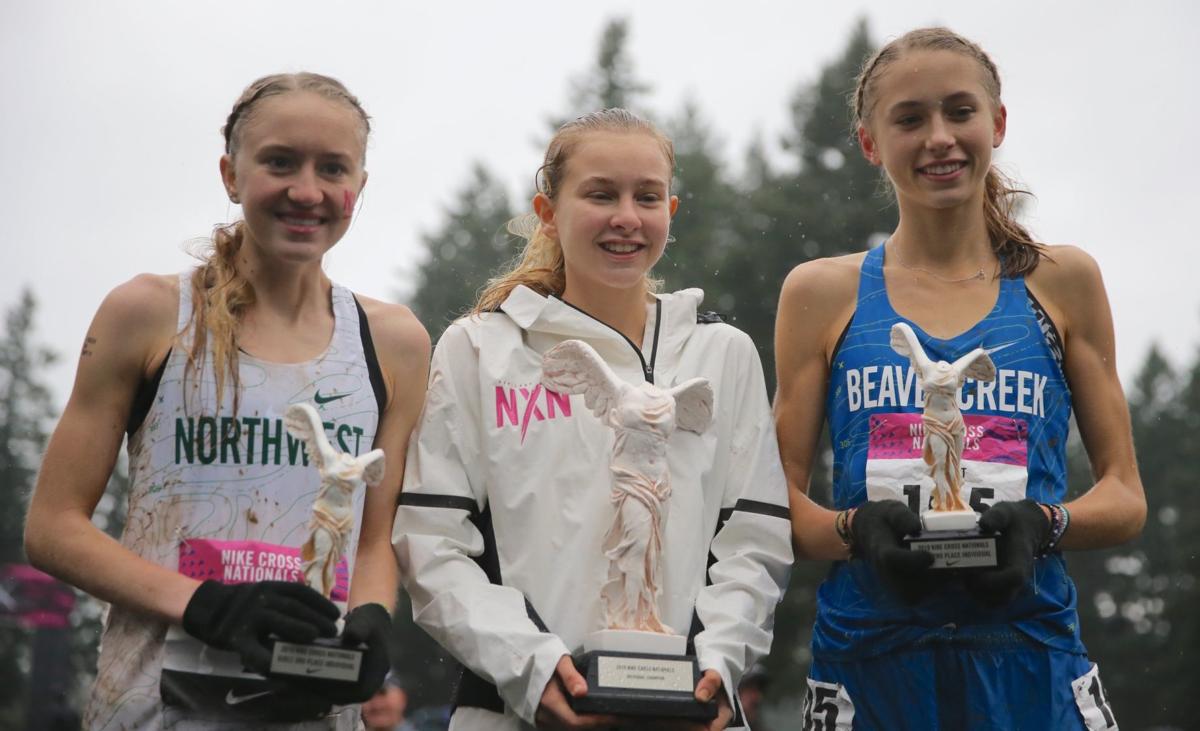 Sydney Thorvaldson nearly did it. After four kilometers of steady pace and settling in the leading pack, she kicked and forced defending national champion Katelyn Tuohy to turn around.

In the final 100 meters Tuohy held on with the Rawlins junior hot on her heels.

Thorvaldson completed Saturday afternoon’s Nike Cross Nationals race at the sopping-wet Glendoveer Golf Course in Portland, Oregon in 17 minutes, 19.37 seconds. That was good enough for third, just 0.32 seconds behind second-place Taylor Ewert of Ohio and a second away from a national championship. Tuohy crossed in 17:18.36 to become the first ever three-time Nike Cross Nationals Champion. Thorvaldson’s third-place finish is the best by a Wyomingite at the national race.

The three-time Wyoming state champion ran out into the lead pack behind Tuohy and remained in her shadow for the first kilometer. With rain still pouring down onto a course that was already full of sitting water puddles, Thorvaldson continued course just a second behind the leader for the first mile.

“In the beginning there was that whole group swarmed, and I felt super strong running with them so I pulled ahead,” Thorvaldson said. “Then me and Taylor stuck with it and I actually felt really good.”

Tuohy then built separation. Thorvaldson fell from second to as far back as fourth before increasing her pace and overtaking the runners directly in her proximity. They ran together, essentially, through the two-mile mark where the top five runners all ran sub-11 minute splits. Thorvaldson disclosed there were a few risky spots throughout the race due to conditions, with one runner slipping to the ground in the first mile that caused issues for a pack running behind the leaders.

Entering the final mile it appeared Tuohy had the race sealed — then came the charge. Thorvaldson and Ewert gained ground at a noticeable pace, causing Tuohy to look back during the final uphill stretch. Thorvaldson remained in second through that stretch and closed the gap to nearly pull even with Tuohy going into the final 150 meters.

“On that final hill I thought ‘OK, if I’m going to catch her, here’s where it could happen,’” Thorvaldson said. “I knew Taylor was right there and I knew one of us was going to be national champion. It could have been any of us, really.

“Katelyn looked back at me and picked it up quite a bit. I kind of wish I’d picked it up with her because she kind of seemed to fade at the end as well, I think that would have been better. But when she left I thought I didn’t have that much kick left.”

Tuohy then pulled away at the slightest in the final 30 meters, shortly before Ewert pulled ahead of Thorvaldson. All three gasped for air and smiled together, finishing nearly 10 seconds ahead of the competition.

Thorvaldson told race organizers beforehand that she felt great, much better than last year when she ran sick and finished 13th (17:29.1). She finished ninth at Nike Cross Nationals as a freshman.

CLOSE: Thorvaldson nearly over-took now-three-time defending national champion Katelyn Tuohy of New York in the final stretch and finished one second out of the championships.

SHE SAID IT: "I think this year I have a lot more confidence and I'm a lot more prepared for anyway the race goes," Thorvaldson told race organizers beforehand.

The stories that captivated Wyoming high school sports in 2019

That was a strange, eventful year. So much happened across Wyoming high school sports, from state champions crowned to gut-wrenching heartache…