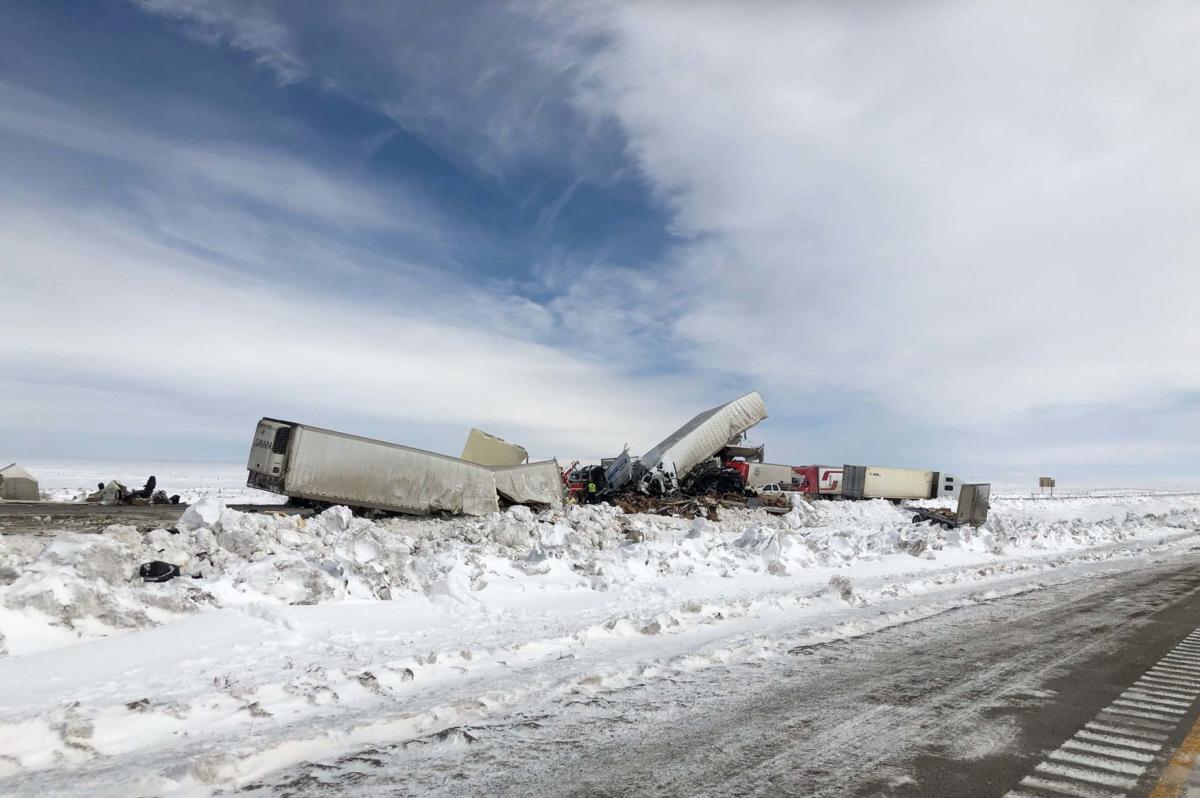 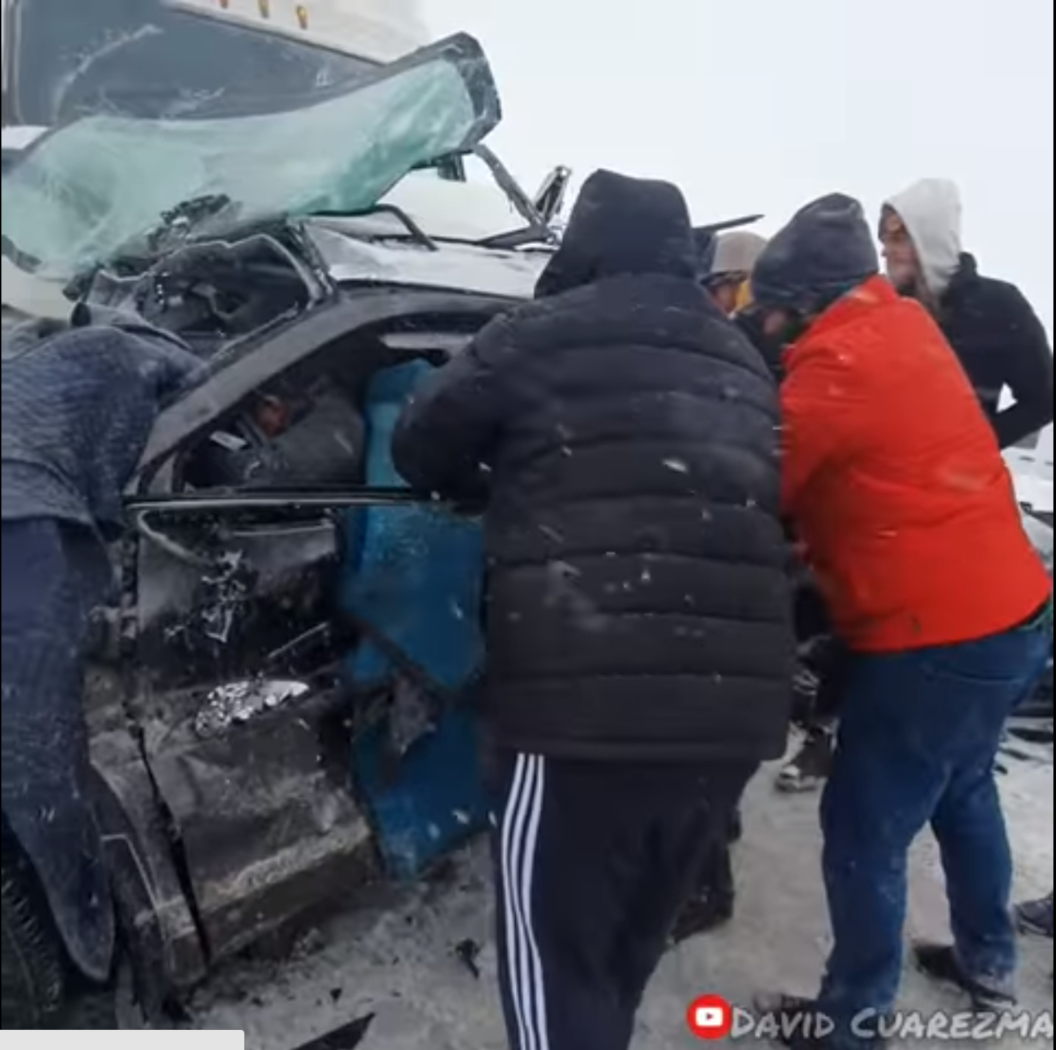 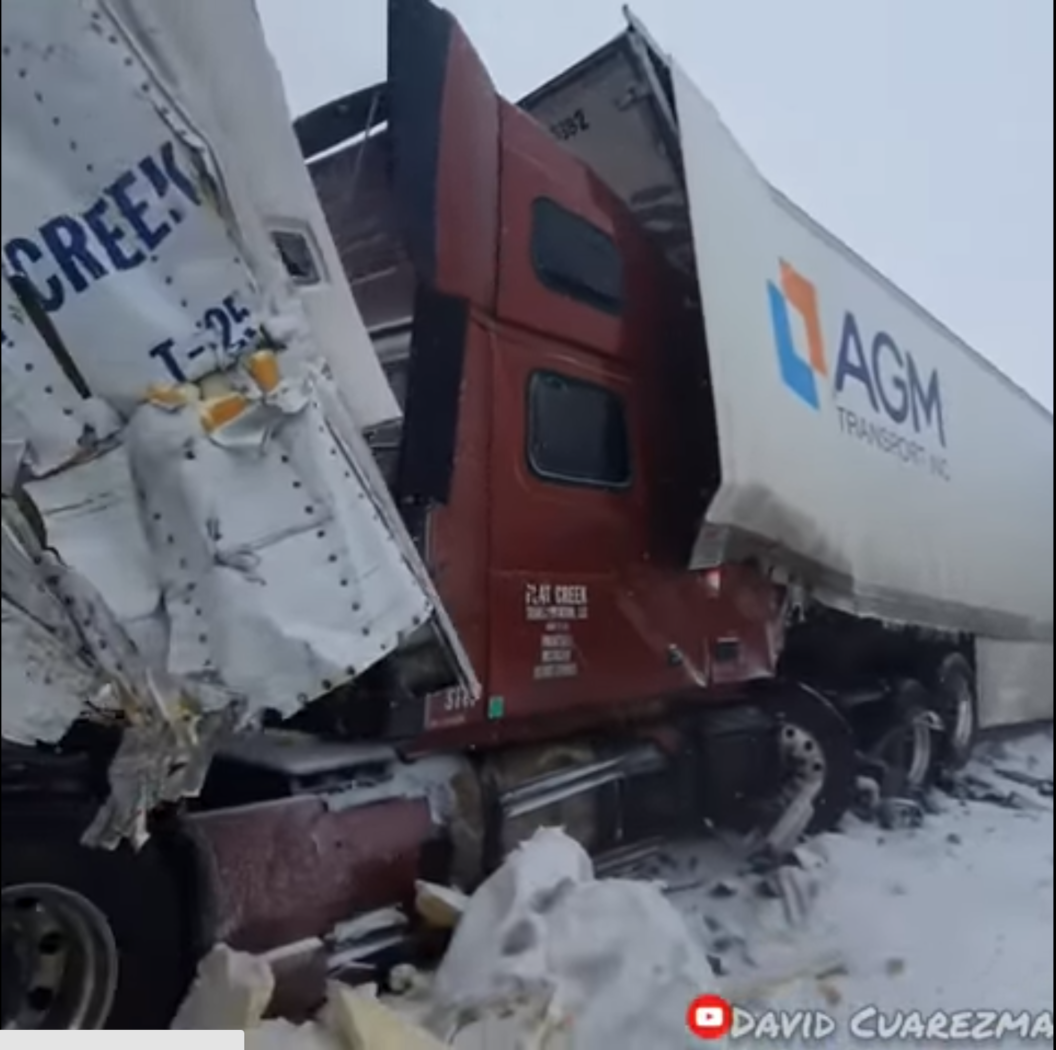 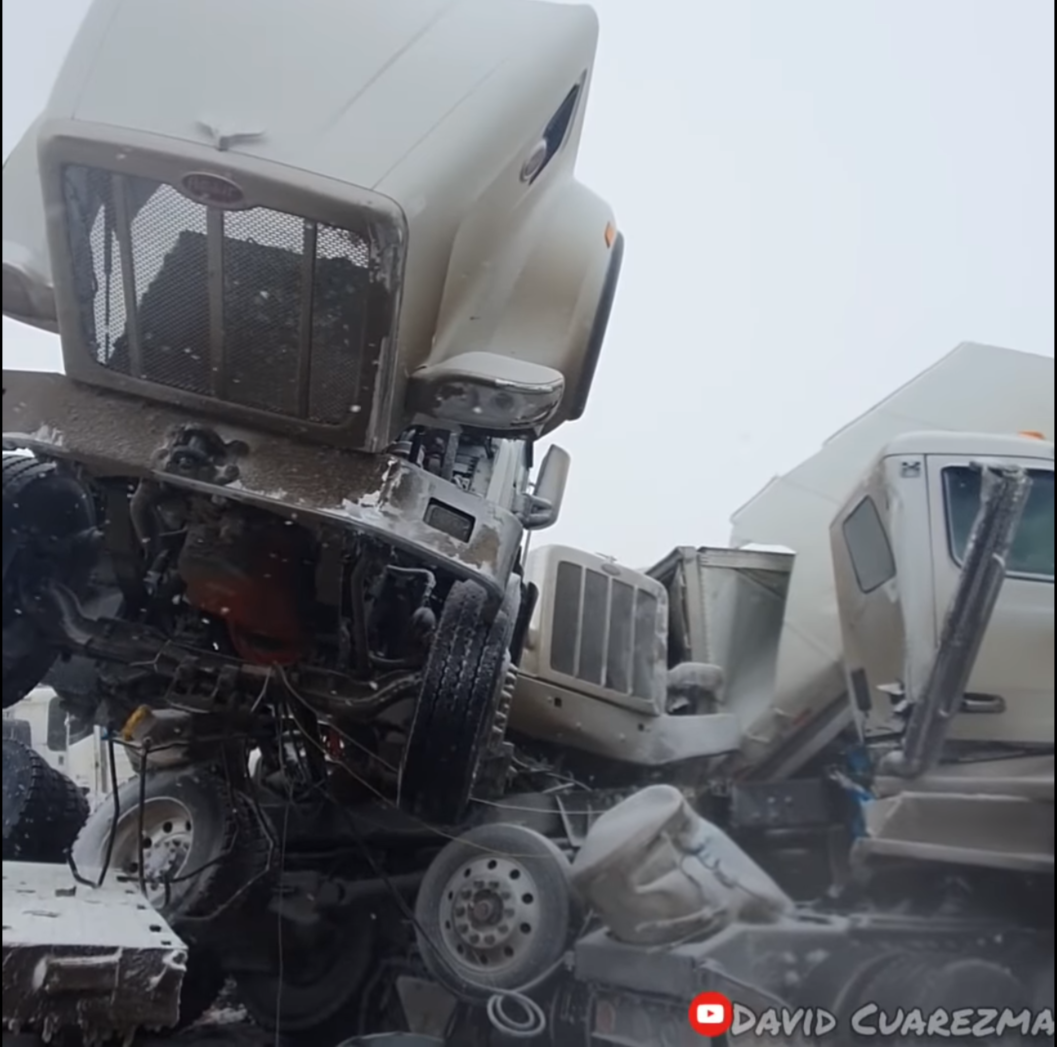 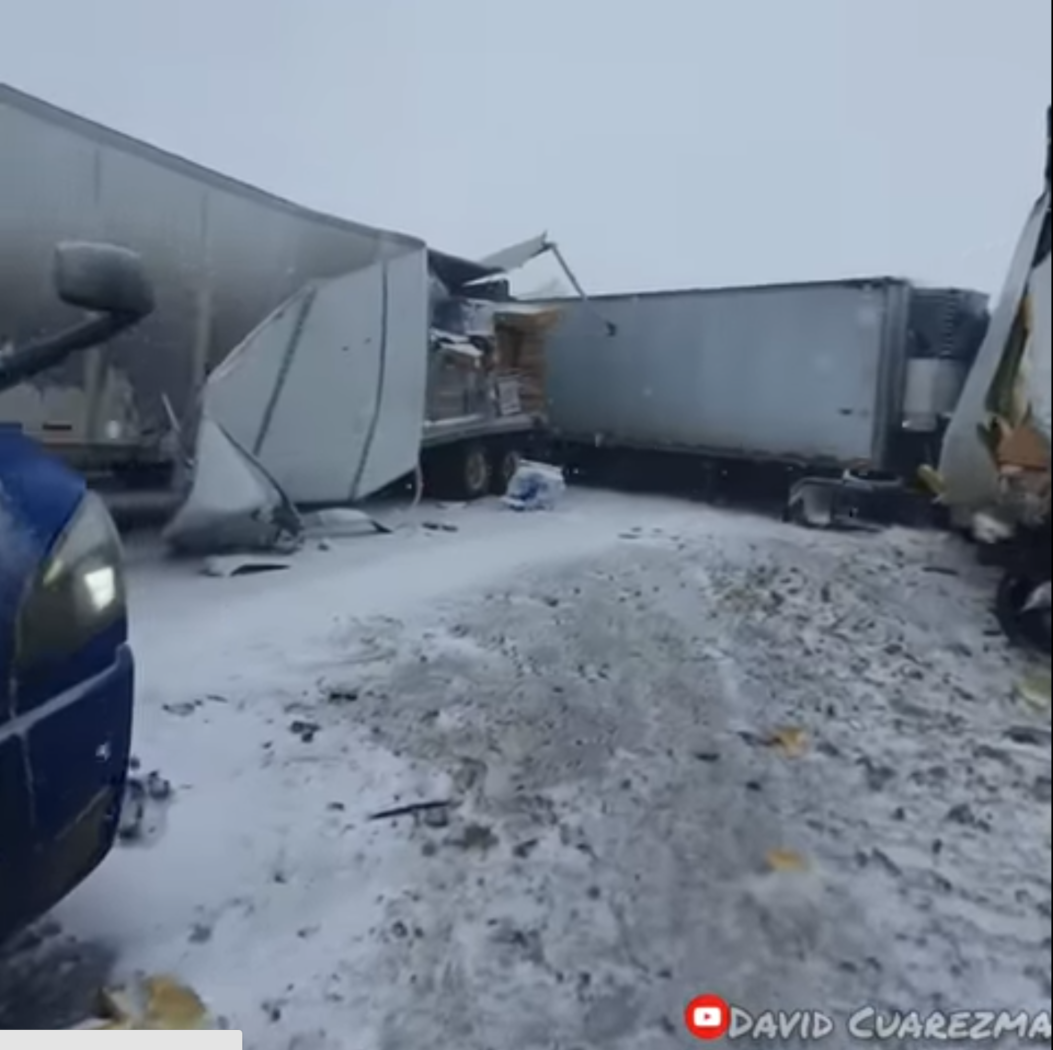 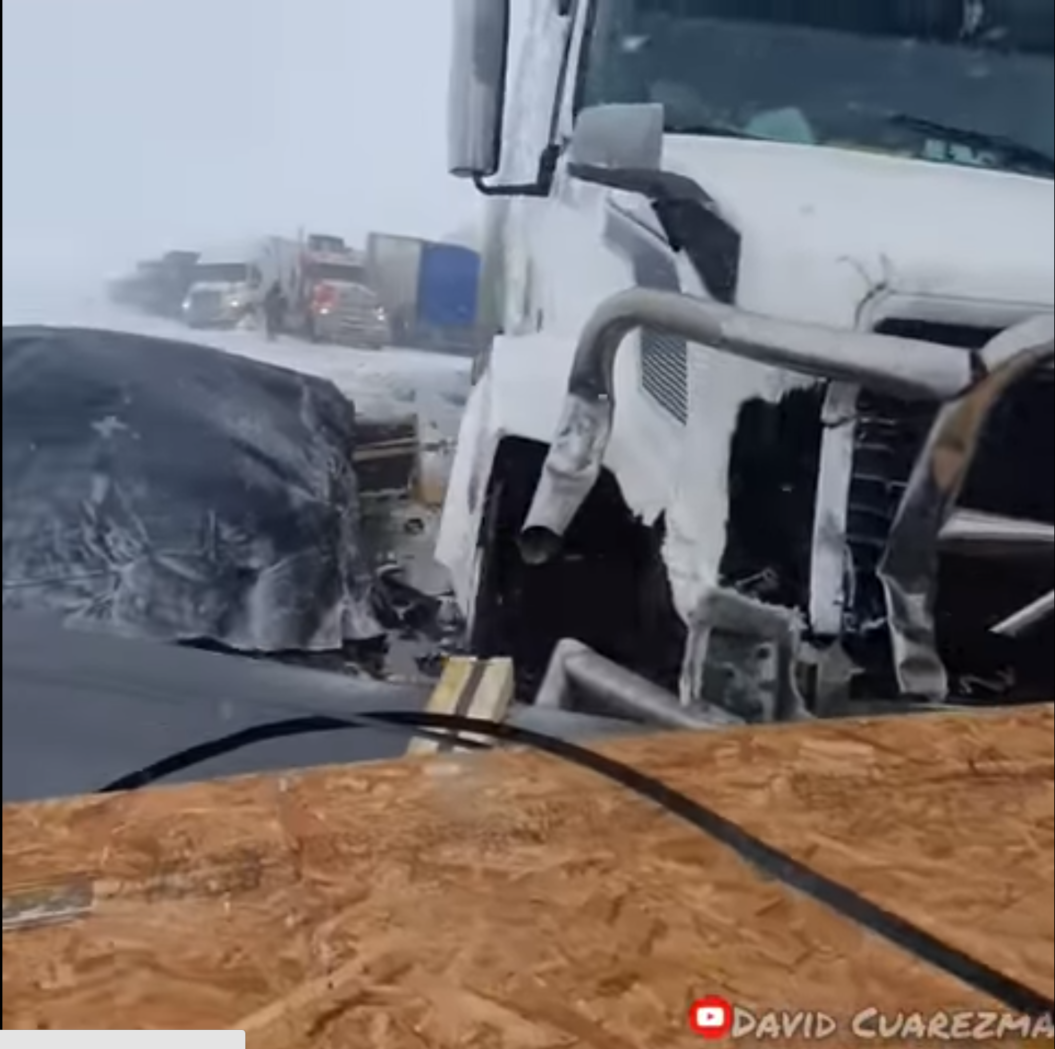 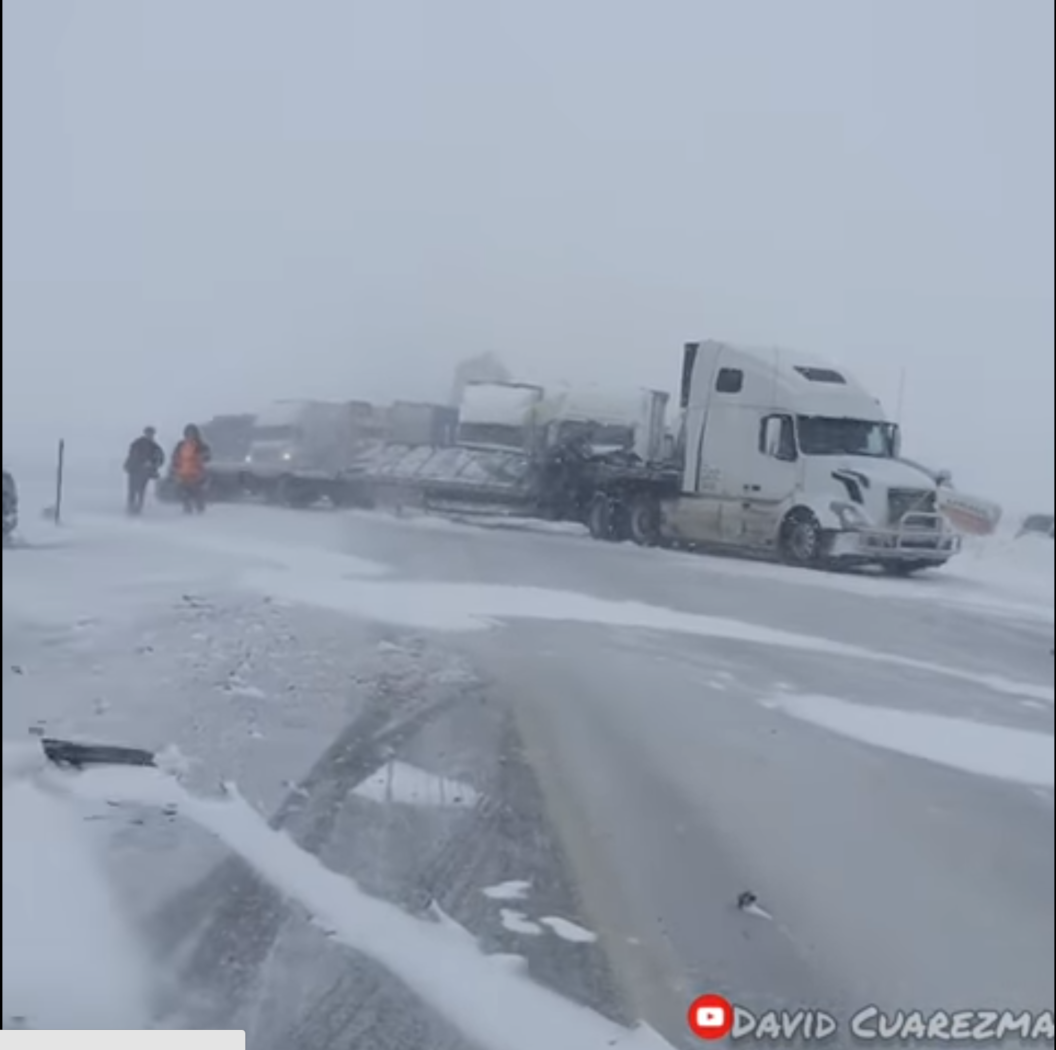 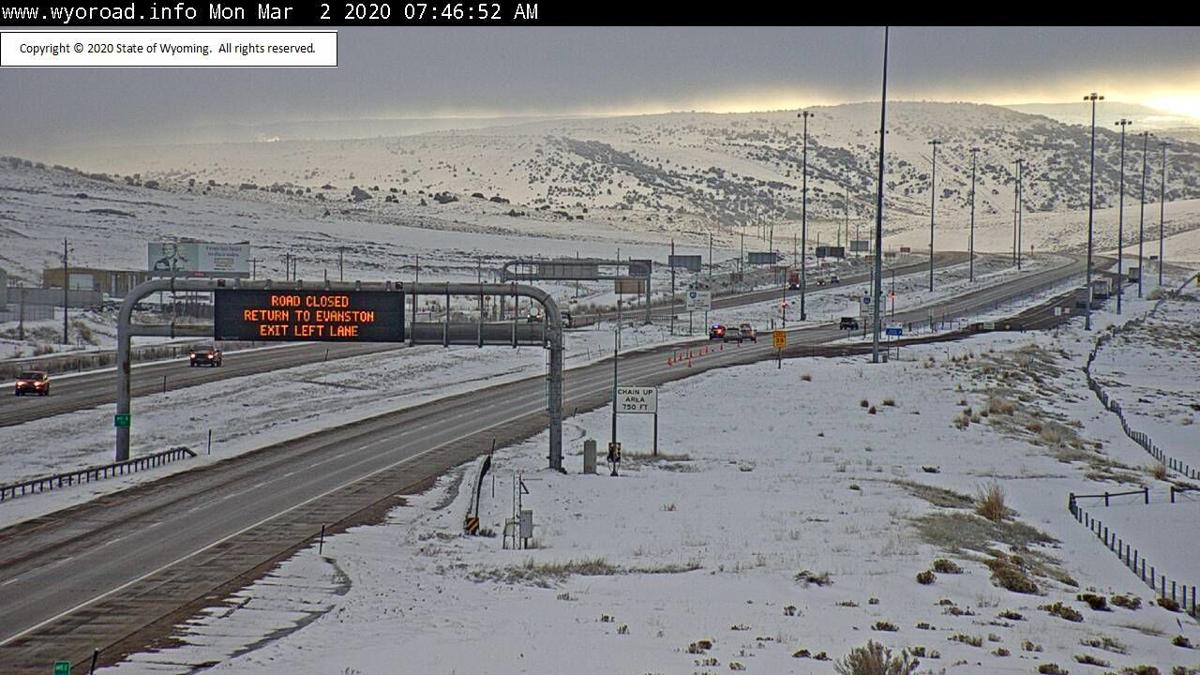 At least three people died in a wreck involving 80-100 vehicles Sunday on Interstate 80, while a second crash on I-80 involving at least 30-40 vehicles occurred around the same time, just miles away.

The larger crash came amid winter conditions on westbound I-80 at milepost 184 near Creston Junction. Videos posted to social media depict a chain-reaction wreck involving cars, trucks and tractor-trailers on icy roads with poor visibility.

Three people are known to have died from that crash, Sgt. Jeremy Beck of Wyoming Highway Patrol said Monday. Officials had previously said four people died, but the highway patrol, the primary agency dealing with the crashes, said the number was three as of Monday morning.

Beck said there was some miscommunication regarding the number, which led to a delay in the patrol putting out its first official statement on the wrecks at 11:19 a.m. Monday.

“Of course that number could increase,” Beck said of the fatalities, “but that’s the number (three) we’re being told.”

“Any further details are pending next-of-kin notifications,” Deputy Jason Mower, public relations officer at the Sweetwater County Sheriff’s Office, said in a statement to the Star-Tribune in which he corrected the number.

Beck also clarified that the number of vehicles involved in the bigger crash was currently estimated at 80-100. However, the patrol did not yet have an exact count, and that number was likely to increase.

The sergeant said he did not know whether a pileup of over 100 vehicles had ever happened on a Wyoming highway before.

The second crash on eastbound I-80 happened around milepost 181 and involved 30-40 vehicles, Beck said. There were no known fatalities in the crash, but one person was left in critical condition, and at least seven were taken to the hospital. Most vehicles from that crash have been cleared to the side of the road.

Officials were still working to clear the scene of the bigger pileup as of 10 a.m. Monday. Wyoming Highway Patrol said that roads were expected to reopen between noon and 4 p.m. Tuesday. The interstate remained closed eastbound from Evanston to Laramie and westbound from Cheyenne to Rawlins on Monday afternoon.

Beck said around 4:30 p.m. Monday that the highway patrol didn’t have any updated information on the wrecks.

Troopers first were notified of the crashes around 3:39 p.m. Sunday, according to the highway patrol announcement. Other than the influence of weather, Beck was not able to provide specifics about what initially caused the crashes, as the agency continues to investigate them.

The fact that two crashes of such significance happened at the same time “is just a disaster,” said Mower of the Sweetwater County Sheriff’s Office.

“It required a huge response,” he said.

Beginning at 3:30 p.m., patients from the crash began arriving at Memorial Hospital of Carbon County in Rawlins, according to Stephanie Hinkle, the hospital’s marketing and communications director. There were 30 people taken to the emergency room, Hinkle said Monday morning. Two patients were admitted to the hospital.

The 25-bed hospital set up a temporary holding area in the cafeteria to deal with all of the patients. Three additional doctors came in to assist the two emergency room physicians who were on duty at the time.

“We were completely full,” Hinkle said.

After patients were discharged, EMTs from the hospital drove them to area hotels.

“Our staff really went above and beyond to help those individuals,” she said.

A Department of Corrections spokesman said Monday morning that about a dozen people involved in the wreck were sheltering in the agency’s Rawlins training center.

A video posted to Facebook by David Cuarezma, a trucker out of Miami, shows wreckage from the crash, including footage of people trying to cut open mangled vehicles in an attempt to rescue others. Jordan Achs, public relations specialist at the Wyoming Department of Transportation, confirmed that the video was from Sunday’s crash.

Cuarezma later shared a longer video on YouTube, during which his truck gets hit and the sound of other crashes can be heard in the distance.

Achs said around 9:30 a.m. Monday it would still be several more hours before the wreckage would all be cleared. She said the Department of Transportation was primarily focused on clearing the roads so that wreckers could get through to clean up.

Visibility was a significant concern Sunday, Achs said, and that remained the case Monday morning as snow continued to blow.

WYDOT confirmed in a social media post that a multi-vehicle wreck had occurred on Interstate 80 amid winter conditions on Sunday but did not describe the circumstances of the wreck. The department shared a media outlet’s story that included a photo of the wreck from afar, which was posted to Facebook.

Additionally, a WYDOT plow was rear-ended Sunday by a semitruck driving eastbound on I-80 near Elk Mountain. There were no injuries, according to a social media post from the department. It was the 10th plow hit in District 1 this winter.

One of our plows was rear ended today by a semi-truck driving eastbound on I-80 near Elk Mountain (mm 255.) There were no injuries.This is District 1's 10th plow hit so far this winter.
Please slow down and give the plows plenty of space so they can work to clear the roads! pic.twitter.com/EHbuEBuZRP

I-80 closed Sunday night around 7 p.m. between Rock Springs and Wamsutter.

At the time, it was expected to remain closed for 14 to 16 hours, WYDOT said.

Interstate 80 closure at crash site could extend into Tuesday evening

The stretch of highway where the crash took place is not estimated to open until at least 10 p.m. Tuesday.

WYDOT still warns of strong — and in certain parts dangerous — winds on various stretches of the interstate.

Authorities are investigating driving too fast for the conditions and following too closely as the causes for a multi-vehicle crash on Interstate 80 that killed three people.

A collision between two semi-trucks led one to jackknife across Interstate 80's westbound lanes, beginning a pileup that killed three people. 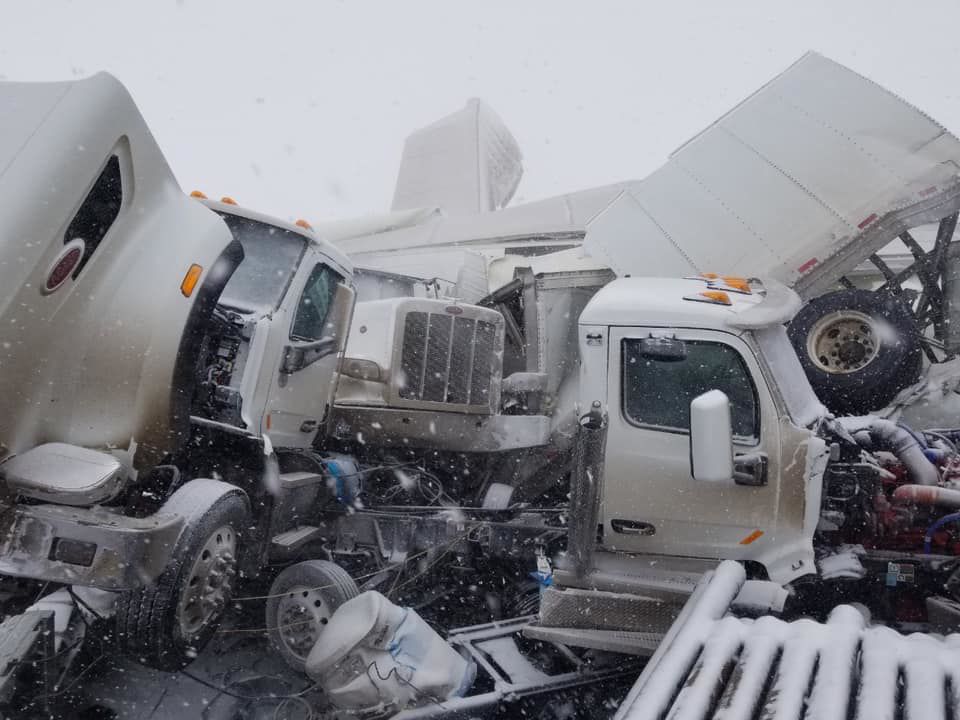