Three Wyoming gun shops say their businesses have seen an uptick over the past week, mirroring a national trend fueled by the spread of the novel coronavirus continuing across Wyoming and the nation.

“It’s borne out of fear that people are going to go crazy,” said Larry Frandson of Cody Wyoming Guns and Ammo, adding that he had seen at least a three-fold boost in his business.

“Have you seen it everywhere else? Yeah, it’s definitely up,” said a man at Frontier Arms in Cheyenne who did not give his name. “Just like everywhere else. It’s an uptick. People are freaking out.”

People have been rushing to stores everywhere to buy up supplies amid fears of how much havoc the coronavirus will wreak. Toilet paper and hand sanitizer quickly became a scarcity in Casper, as did bleach and other cleaning products. While state officials haven’t mentioned firearms, they have urged people not to hoard supplies they don’t need.

Lines snaking out of firearm dealers across the country have become common sights on newscasts and in newspapers. Sales of ammunition from one supplier in Florida were up 235 percent compared to February.

Jeremy Scribner of Wyoming Gun Company in Casper said the store saw an increase of gun and ammo sales last week. He said the store has shut down its firing range “because it was more for entertainment purposes.”

“I’d say 50 percent of firearms we’ve sold in the last 10 days has been new shooters,” he said, adding that wasn’t typical.

He said some customers have been open about their firearm purchase being tied to the pandemic.

“Just concerns of protecting their homes and their food and everything else, everybody’s buying everything up so that makes people nervous,” Scribner said.

Frandson in Cody said he’s seen three to five times the normal sales. He said a woman had come into his shop Wednesday who lived with her grandson and wanted a 9 mm pistol to protect herself, should anyone break in during the pandemic.

“I assured that I didn’t think so, but she wanted to buy a 9 mm pistol anyway and so she did,” he said.

He said 9 mm ammunition, common in pistols but also usable in rifles, and .222 ammo, for assault rifle-type weapons, had been selling rapidly. His suppliers are running dry, too.

“Several warehouses that I work with, about 16 of them, they’re out of tons of stuff,” he said. “They only have a couple of cases of ammo. Just nothing much, they usually get pallet loads.”

Calls placed to two other gun shops were either not answered or those who answered the phone declined to answer.

Shops across Wyoming have posted to their social media pages about their inventory. Triggers, a store in Mills, posted to its Facebook about delays and needing to shorten hours to process more deliveries. Rocky Mountain Gun Trader in Cheyenne posted about “increased traffic within the store” and staff “already push(ing)” themselves “to their limits with in-store customers.”

With the likelihood of schools reopening April 6 looking slim, educators are actively working to continue educating students however they can.

Pharmacy board: Providers may be writing prescriptions for potential COVID-19 drugs for themselves, relatives

"The Board of Pharmacy has heard from several pharmacists in Wyoming specifically about practitioners writing prescriptions for medications that may anecdotally treat COVID-19 for themselves and family members," the Wyoming pharmacy board's executive director told the Star-Tribune.

There are now 34 cases in Wyoming.

As long-term care facilities tighten visitation, a daughter waves to her mother through the window

Ann Rochelle has a standing Sunday lunch date with her mother every week at Meadow Wind Assisted Living. That changed this month, when the novel coronavirus swept across the globe.

The latest: Coronavirus in Wyoming — March 23

Looking for medical resources in Casper? Find a list of them here.

Gov. Mark Gordon acknowledged that testing limitations are likely contributing to an undercount in the number of coronavirus cases as the official total reached 28, with new cases in Carbon and Laramie counties.

The staff at the temporary Wyoming Medical Center clinic have been working 12- to 13-hour days seven days a week.

"Wyoming, we have a tendency to just kind of pooh-pooh things and blow it off," the head of the state's hospital association said, "but this thing’s here, it’s at our doorsteps, and we can control our own destiny if we do the right thing."

A psychiatrist explains how to talk to your kids about coronavirus

Wondering how best to discuss the virus with your kids? A Casper psychiatrist offers some tips.

More than a week after the first Wyoming coronavirus case, health officials confirmed Friday that Natrona County has its first case.

Lander woman infected with coronavirus had to wait days for test

The woman is a resident of a Lander assisted-living center where several others have been sickened.

"It's hard to determine who's got COVID that's mild and who doesn't," one doctor said. "That's the worry."

There are now 21 identified cases of COVID-19 in Wyoming.

The hospital aims to use telehealth to help address the volume of people concerned they may have the respiratory infection.

The latest patient was a man who was over the age of 60 and living in Teton County.

As more tests are performed, the number of cases in Wyoming continues to grow.

More than 400 Fremont County residents with symptoms associated with COVID-19 are in self-isolation, with an additional 23 quarantined.

The action comes days after the state's pharmacy board said they'd heard reports of physicians writing prescriptions for medications — normally used to treat malaria, lupus and arthritis but now touted as potential COVID-19 medications — for their families and friends.

As coronavirus cases ramp up, officials say increase is a mixture of more disease and more testing

Coronavirus cases in Wyoming have spiked. Health experts say there's more than one reason for that.

The masks are being manufactured from plastic within the university's maker space lab.

More than half of people in Wyoming say they or their immediate family have had their hours or pay cut.

The number of coronavirus cases associated with the facility has more than doubled.

Health Officer Dr. Mark Dowell says he'd like to avoid issuing a local shelter-in-place order but may have to if Gov. Mark Gordon doesn't.

University of Wyoming says its spring commencement ceremonies will be virtual

The University of Wyoming will move its spring commencement and graduation ceremonies to virtual formats, its latest effort to slow the spread…

The guidance mirrors the recommendation from the CDC to wear face masks or coverings when in public. 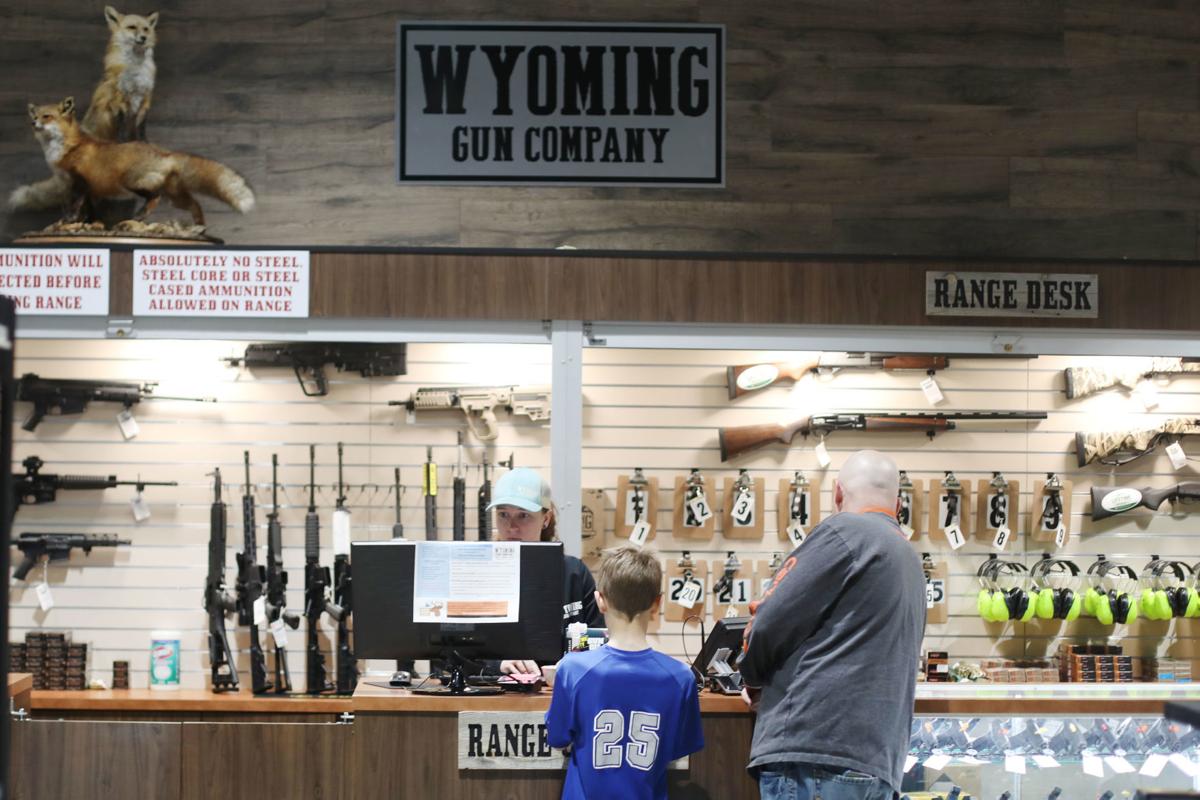 Leah Hayes aids a customer in purchasing a Beretta handgun and an AR-15 on Thursday at Wyoming Gun Company in Casper. The store has implemented new rules closing down the shooting range and limiting nine customers in the store at a time to comply with health restrictions to limit the spread of COVID-19. 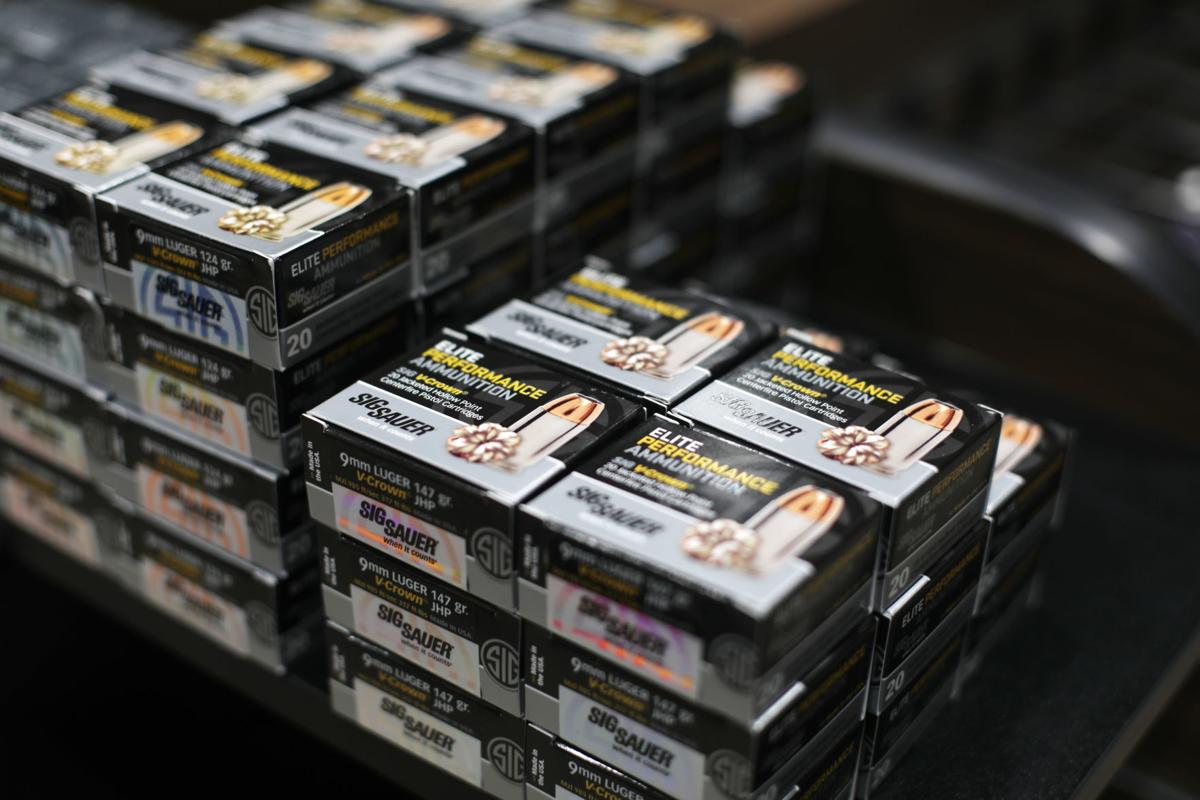 Boxes of ammunition sit on a display Thursday at Wyoming Gun Company in Casper.