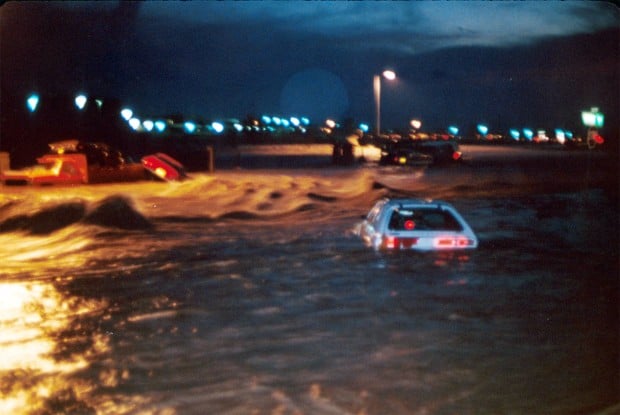 Cars float down the street during the height of the flooding in Cheyenne on Aug. 1, 1985. (AP Photo/The Wyoming Tribune Eagle file) 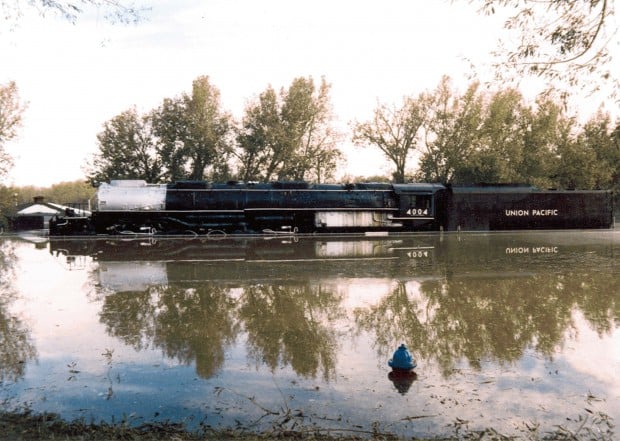 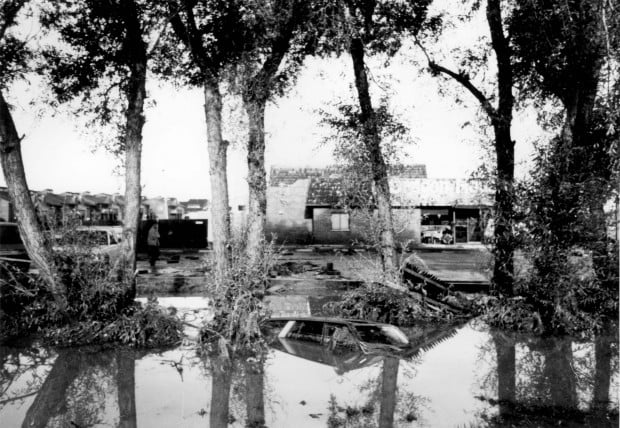 CHEYENNE -- When Dave Gill left for work the evening of Aug. 1, 1985, he had a vague feeling that something wasn't right.

"My wife even said to me, 'You're uneasy tonight,'" said Gill, then the director of the Laramie County Emergency Management Agency. "And I said, 'Well, I just got a feeling that things are going to be different tonight.'"

During the next several hours, a massive thundercloud parked over Cheyenne, dumping a record 6 inches of rain in less than four hours and sending walls of water up to 5 feet high rushing through the city.

Twelve people died, almost all of them drowned in floodwaters. Damage totals exceeded $61 million, from flooded businesses and collapsed houses to cars buried in 6-foot-high drifts of hail.

Twenty-five years after the worst flash flood in Cheyenne's history, the city has taken steps to ensure such a disaster doesn't happen again. Flood channels have been diverted, new construction in flood plains is regulated by the city, and massive retention ponds dot neighborhoods.

But even with the changes, what will always remain are the memories of those who survived that summer night in 1985.

"The bottom line is that you always remember August 1, 1985," said Jonathan Downing, the executive vice president of the Wyoming Contractors Association who as an 11-year-old sat out the flood in his parents' basement.

While no one could have predicted the devastation that would take place the night of Aug. 1, that afternoon anyone looking at the sky to the west could see trouble was coming.

"The thunderhead that it came out of was just astounding," said Byron Rookstool, who was Cheyenne's police chief at the time. "I mean, it was huge, and when it started raining, it just kept going."

And when it reached Cheyenne, the storm stopped in place, thanks to an unusual atmospheric condition.

Dry and Crow creeks, on the north and south ends of town, respectively, turned into rivers. Any part of town on low ground – downtown, Holiday Park, the Dell Range flood plain – quickly filled with several feet of storm water.

With the rain came the tornado sirens, and residents headed down into their basements and storm shelters.

But as people huddled down below, the waters kept rising. Alice Paulsen, 73, was later found dead by divers in the basement of her Seventh Avenue home; she wasn't able to escape before floodwaters poured into her house.

Meanwhile the usually aptly named Dry Creek turned into a raging torrent, washing away cars – along with their drivers – who tried to cross the channel on bridges in north Cheyenne.

Two teenagers, James Jenkins and Joelle Pando, were in the back seat of a friend's car on College Avenue when the water swept over and into the car. The two people in the front seat escaped; Jenkins and Pando didn't.

"They couldn't get out," said Leo Pando, Joelle's father. "It just swept them right off into that ditch. That was an ugly, ugly night."

Deputy Sheriff Robert Van Alyne tied a rope to himself and dove into the swift-moving water to save a little girl; both drowned.

Emergency authorities quickly found themselves overwhelmed. The basement of the Cheyenne Police Department filled with water, knocking out the city's 911 system.

A new impromptu operations center was hastily set up in a Winnebago on higher ground.

"If you have an operations center, you have a pretty good chance of getting your operation under hand and being able to direct emergency services to where the needs are," Gill said. "But when you lose your center, it takes some time to re-establish that network."

By the morning of Aug. 2, the waters began to recede, and residents emerged from their homes to a new and chaotic world.

Muck was piled up on downtown sidewalks. Cars were floating around in the water and, in a couple of cases, had drifted into nearby buildings.

By Carey Junior High School, the water had collected hailstones in huge, lava-like mounds, with the rear ends of submerged cars sticking out of them.

When Gill surveyed the damage that morning, he saw damaged houses and wreckage everywhere.

"Some (people) were sitting out on their front porch – their basement was completely full of water," he said.

But Gill also saw people start to rebuild almost as soon as the storm was over – both their property and their friends and neighbors.

"You felt a great sense of pride that this community tried to take care of each other," Gill said.

At the request of Gov. Ed Herschler, musician Neil Young headlined a flood benefit concert less than a month after the storm, raising more than $136,000 for relief efforts.

And in the years after the flood, the city took measures to ensure such a disaster would never happen again – though today, those efforts are only partially completed.

Using millions in federal grant money, the city launched a series of flood control projects. The Dry Creek channel was rerouted around the areas that suffered the most damage in the flood. Culverts that trapped floodwaters were replaced with bridges. The City Council passed new regulations controlling where new buildings could be constructed in flood plains.

Today, a number of water detention ponds pockmark the city – including one in the middle of town called Pando's Pond, after Leo Pando, who was elected mayor of Cheyenne in 1992.

Pando himself pushed for any new city developments to have retention ponds built nearby.

"Personally, I knew what the other 11 families went through with losing their loved ones," Pando said. "Something had to be done."

However, Cheyenne city engineer Doug Vetter said while the flood control efforts have gone a long way in making the city safer from flash floods, there hasn't been enough money to be able to completely prevent another flooding disaster in the future.

The areas around downtown Cheyenne and Holiday Park, for example, are still not completely safe, Vetter said. But projects to make them safe, he said, would cost millions of dollars – and the city doesn't have that kind of money.

"We've been kind of picking away at the problem for the last 25 years," he said. "I think we've taken care of a lot of the greatest risks, but certainly we haven't caught them all."

"These are things that will be with these people forever," Gill said. "So 25 years – it doesn't seem possible that it's been 25 years since we had that flash flood, and we lost as many people as we did."

Police say the protester, who was uninjured, complied with an officer's attempt to get him out of the street, but a separate law enforcement agency later cited him in connection with the incident.

Cars float down the street during the height of the flooding in Cheyenne on Aug. 1, 1985. (AP Photo/The Wyoming Tribune Eagle file)