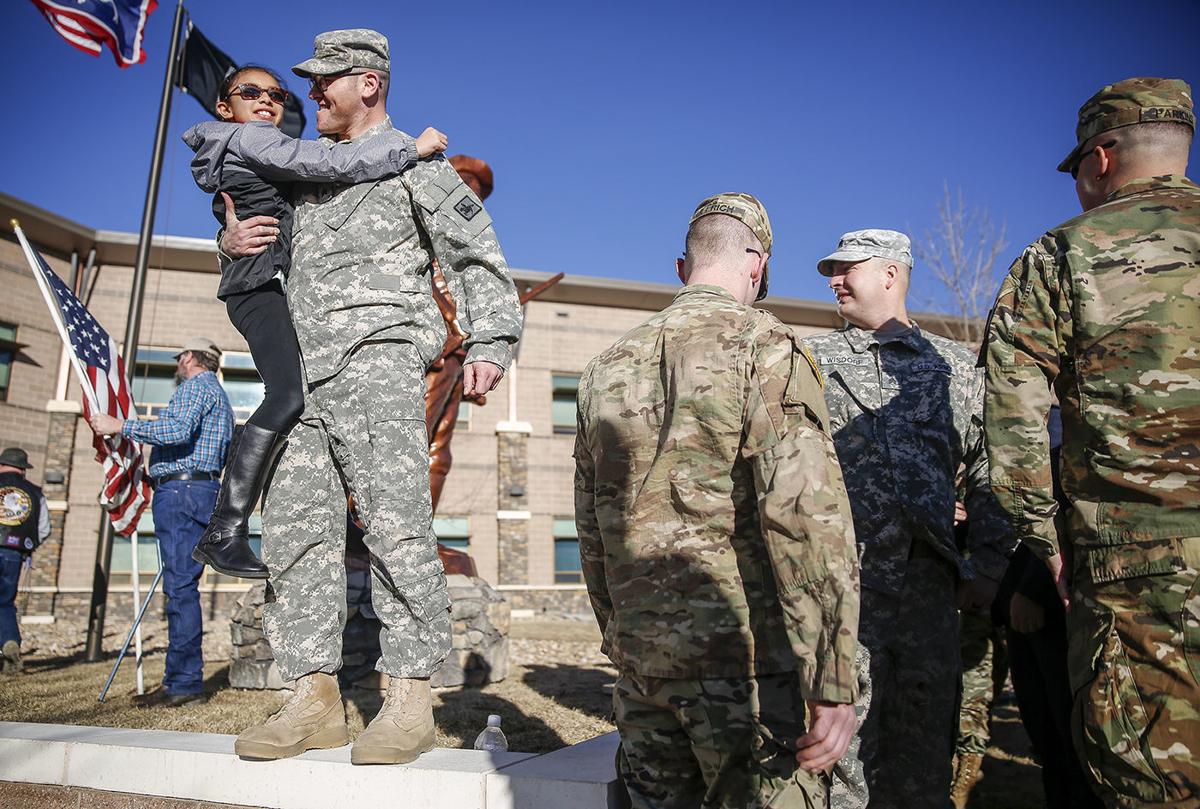 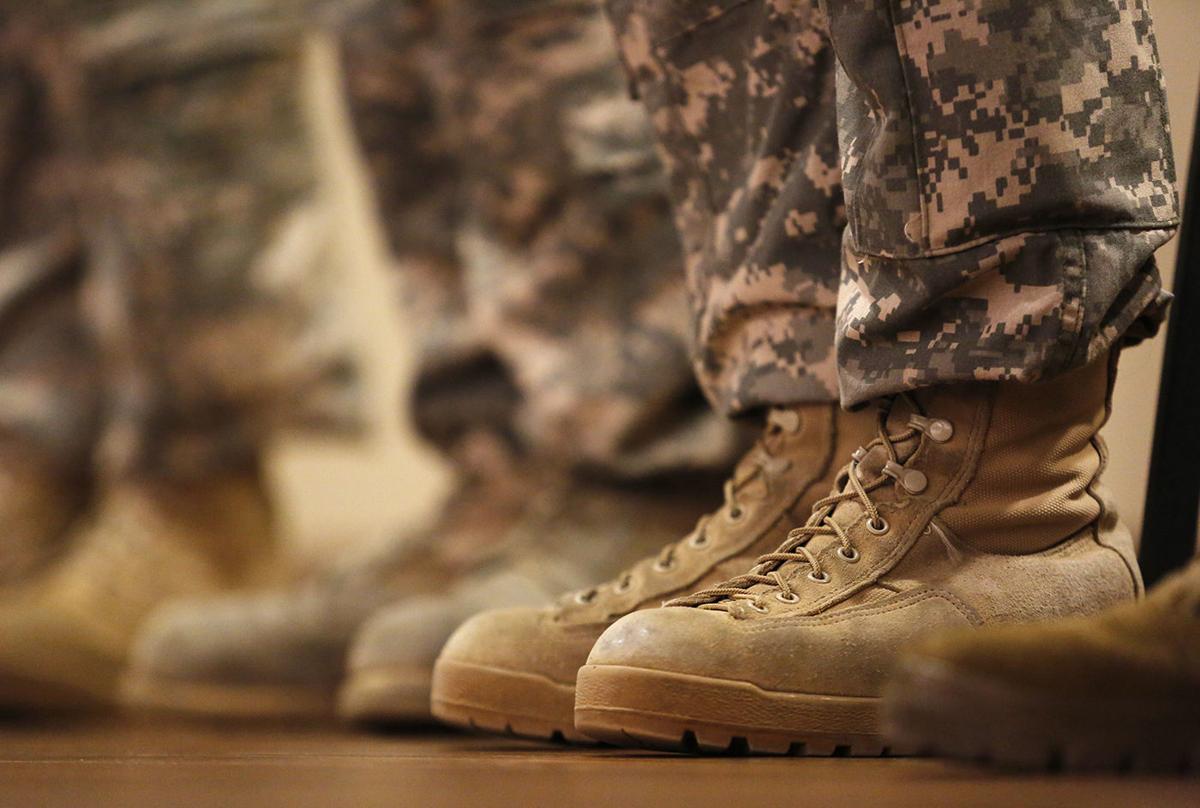 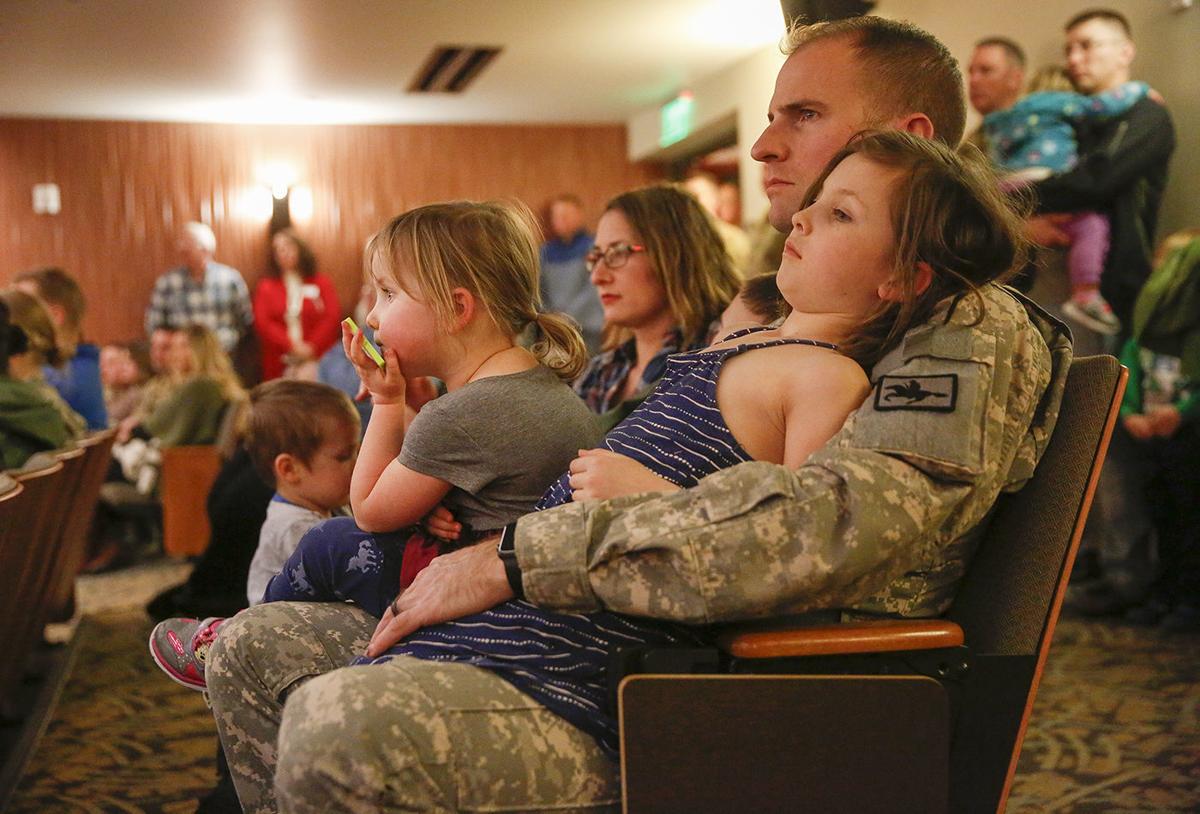 CHEYENNE — Throughout the ceremony to send off 29 Wyoming Army National Guard aviators to Afghanistan, there was the unmistakable sound of children.

After the Thornton Fire Department opened the proceedings with bagpipes and drums, a child cried out, “Yay!”

As Gov. Matt Mead — in his last speech as commander in chief of Wyoming — and Maj. Gen. Luke Reiner spoke, children’s voices cut the air. At one point during Mead’s speech, what sounded like a small toy car escaping its owner and fleeing down the auditorium’s concrete floor underwrote the governor’s voice.

“To the families, we can’t thank you enough,” Reiner told the packed auditorium Friday. “You are absolutely the rock that your soldier relies on, and I know that you will miss him or her dearly.”

Those soldiers, parents and aunts and uncles and sons and daughters, aviators with the 2nd Battalion of the 211th Aviation, will be gone for nine months, the first step in a wave of deployments of Wyoming units to the Middle East. In all, the units will constitute the largest deployment of soldiers from the Equality State to the Middle East since before Mead was governor.

It is this unit’s sixth deployment since Sept. 11, 2001 — and on that day, the unit was preparing for a mission to Bosnia.

The 29 soldiers will leave Wyoming over the coming days. On Saturday, some will fly the unit’s UH-60 Black Hawk helicopters to Fort Bliss, Texas, where the unit will continue training before deploying to Afghanistan. The rest of the company will fly commercially to Texas on Sunday, a spokeswoman said.

They will go from saving lost hikers and inner tubers in Wyoming’s wilderness — efforts that earned several soldiers recognition during the ceremony — to evacuating wounded fighters in America’s longest-running war.

“It’s not lost on me that today, we carry on a long tradition ... of sons and daughters of Wyoming who deploy to a combat zone to save lives,” Reiner said, “to ensure that those injured on the battlefield, to ensure that those wounded in action are given that gift of receiving the best medical care in the world, and it all starts with a ride on your helicopter during that golden hour, the hour of life, the hour that makes a difference, the hour that will bring that man or woman back to their families that they love.”

This unit — Golf Company — will join other detachments from New York, New Jersey and Mississippi. They take with them a white road sign — “Entering Wyoming” — and a state flag, given from Mead to Lt. Logan Koerwitz.

Over the next eight months, more than 250 more Wyoming soldiers will deploy to the Middle East.

“I guess I would just ask one thing,” Capt. Eric Becker, the company commander who will be staying in Wyoming, told the soldiers. “Stay focused on the mission, stay in your training ... and take care of one another. That last one’s the most important. Make sure the guy sitting to your left and to your right is OK.”

He told the assembled families, as a child babbled somewhere in the audience, to call him if they needed anything. His attention turned back to the 29 soldiers leaving those families.

“God bless you all, Godspeed, and I’ll see you in nine months.”

Roughly 300 soldiers from six Wyoming Army National Guard units will deploy to the Middle East between January and September 2019, the state a…

A Wyoming Army National Guard unit will have a sending-off ceremony on Friday as it prepares to deploy to the Middle East, the first in a wave…

One-hundred and thirty Wyoming Army National Guardsmen will fly to Texas ahead of a nine-month deployment to the Middle East, with Gov. Mark G…

Sgt. Derek Walker lifts his 1-year-old son Beau into the air, balancing the blond boy on one hand. Over and over again, Walker thrusts Beau in…

The two units still overseas were set to return to the United States in the coming months. But their return will likely be delayed by 60 days because travel restrictions related to the virus have blocked units traveling to replace them.