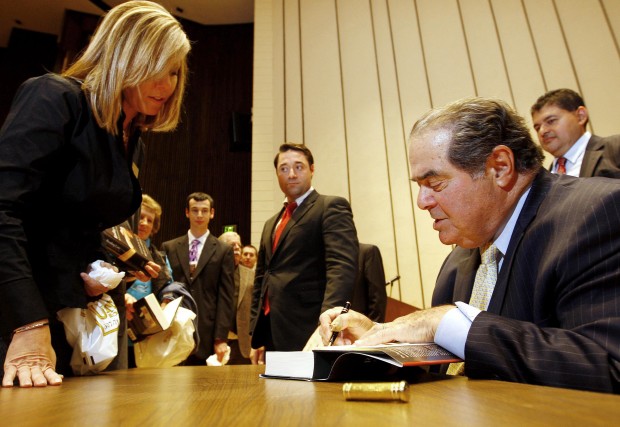 U.S. Supreme Court Justice Antonin Scalia signs copies of his book after speaking at the University of Wyoming Fine Arts Center on Thursday in Laramie. 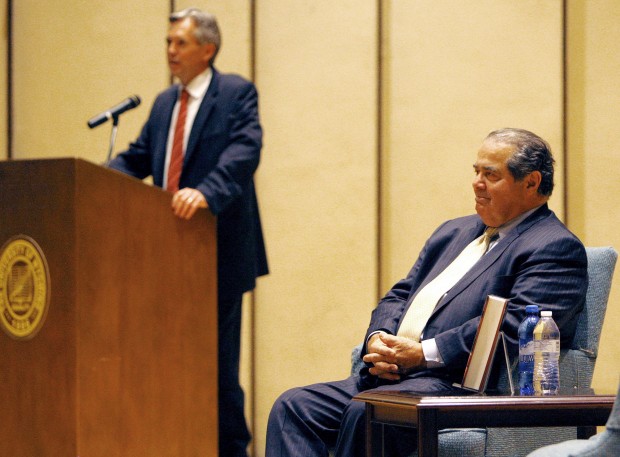 U.S. Supreme Court Justice Antonin Scalia listens as he is introduced by University of Wyoming College of Law Dean Steve Easton at the UW Fine Arts Center on Thursday afternoon in Laramie.

LARAMIE — What do Elvis and U.S. Supreme Court Justice Antonin Scalia have in common? The chance of getting them to come to Wyoming is slim to none, said Caitlin Wallace, a third-year University of Wyoming law student and a member of the Federalist Society.

Pictures of the king of rock ‘n’ roll and the king of the U.S. Constitution hang next to each other at the society’s office in Washington, D.C.

Wallace wrote the justice a letter, begging him to come to the university after she saw the photos in the office at a society convention. The U.S. Supreme Court’s longest-serving justice, appointed by President Ronald Reagan in 1986, agreed to make a stop in Laramie to coincide with an antelope hunt.

“You guys don’t get to see Supreme Court justices,” Scalia said Thursday to a packed audience at the UW Fine Arts Center that included U.S. Sen. John Barrasso, R-Wyo., and all members of the Wyoming Supreme Court.

Scalia last visited the state in September 2008 when he spoke before the Wyoming State Bar in Cheyenne.

The hard-boiled constitutional “originalist” known for his linguistic austerity showed his lighter side on Thursday. He was less a strident observer of the law and more of an entertainer, resembling Jackie Gleason with his jokes, slicked-back hair, baby-faced smile and New York attitude. Like any good performer, his campy side didn’t overshadow his message: the enormity of a “living Constitution.”

Scalia’s ethos is that of many Wyomingites. The originalist moniker represents someone who believes the Constitution is an enduring document — not a flexible, living one that evolves with the standards of society.

The founding fathers feared a future generation that would misinterpret the Bill of Rights and wanted to restrain future societies from misconstruing the document, he said.

“A constitution that evolves isn’t worth a whole lot,” he said.

The Constitution is not something applicable to “whatever you care passionately about,” he said with a sardonic grin. A judge who believes in the living Constitution is a happy fellow, he said, because he goes home and tells his wife, “The Constitution means exactly what I thought I wanted it to be.”

Scalia denied his approach always leads to the most conservative decisions. For example, he said he sided with the court majority in ruling that it’s constitutional to allow burning of the U.S. flag. “If I were king,” he said, “I’d throw that bearded, sandal-wearing weirdo in jail.”

Scalia used the Eight Amendment, which prohibits cruel and unusual punishments, as an example of the malleability some of the nation’s judges, lawyers and justices have applied to the Constitution.

The death penalty survived for 200 years without prior objection by states. But because of the flexible Constitution and its “evolving standards that mark the progress of a maturing society,” lawyers are turning the courts into legislators, he said.

The court is not an enforcer of the law and needs to abide by precedents, not by society’s interpretations, he said. A common misnomer, he said, is that a living Constitution gives people more freedoms.

He referred to the confrontation clause in the Sixth Amendment that had at one time taken the “right of confrontation away” from citizens. He helped to restore that right when he ruled in Crawford vs. Washington that statements from unavailable witnesses were not to be used in court.

Twenty years prior to the decision, it wasn’t heresy for testimony from an unavailable witness to be used in court, which prevented the accused from confronting the witness in a cross examination.

Scalia said adherence to the originalist philosophy is what helped overturn the flawed application of the Sixth Amendment that had ignored hundreds of years of precedent.

“The Constitution will someday, at the end of the road, be destructed,” he said.

The Supreme Court is revising the Constitution “term by term,” and without an originalist philosophy, “what are you going to use?” he said.

He hinted that people would suggest “natural law” or the moralist ideals of John Rawles.

“Give me a break,” Scalia said.

Failing to stick to the original meaning of the Constitution only invites judges to decide on their own how to warp its meaning to fit their own reading, Scalia said. He said that explains the increasingly bitter contests over confirming Supreme Court justices, because senators all want one they believe will rule their way on hot-button issues.

“It’s crazy, it’s like a mini constitutional convention every time we confirm a new Supreme Court justice,” Scalia said. He said he was unanimously confirmed with only two senators absent, but likely couldn’t get 60 votes today.

Scalia’s views resonate across the state, Barrasso said. “He is a traditionalist and originalist and he made that very clear today,” the senator said.

Steve Easton, the dean of UW’s law school, had Scalia as a visiting professor at Stanford in 1981.

“He was probably the most entertaining professor I ever had,” he said. “He’s very open and up front about what he thinks. He’s willing to be liked or unliked.”

Easton said many of his Stanford classmates disagreed with Scalia, but their ideas were always up for discussion.

“Wyoming has what the justice talks about,” Wallace said. “We need to get back to where the founding fathers came from. The justice’s and our state’s ideas mesh.”

In response to Wallace’s question about the single best piece of advice Scalia would give to law students, he advised them not to waste their time taking “frill courses.”

“Professors like certain subjects that they’re writing a book on, so they teach a course in that subject,” he said, adding that students who take the course get to do the research for the book.

“Because there are so many professors teaching their hobbies, the rudimentary courses are not taught with the frequency necessary for everybody to take them,” Scalia said.

Rain turns to snow in Casper

A former Cheyenne counselor convicted of sexually assaulting a patient and defrauding Medicaid received three to five years in prison.

The BLM began operations on Oct. 7 and had gathered 285 wild horses — 138 mares, 63 foals and 84 stallions — as of Sunday. Four fatalities were recorded during that period.

U.S. Supreme Court Justice Antonin Scalia signs copies of his book after speaking at the University of Wyoming Fine Arts Center on Thursday in Laramie.

U.S. Supreme Court Justice Antonin Scalia listens as he is introduced by University of Wyoming College of Law Dean Steve Easton at the UW Fine Arts Center on Thursday afternoon in Laramie.