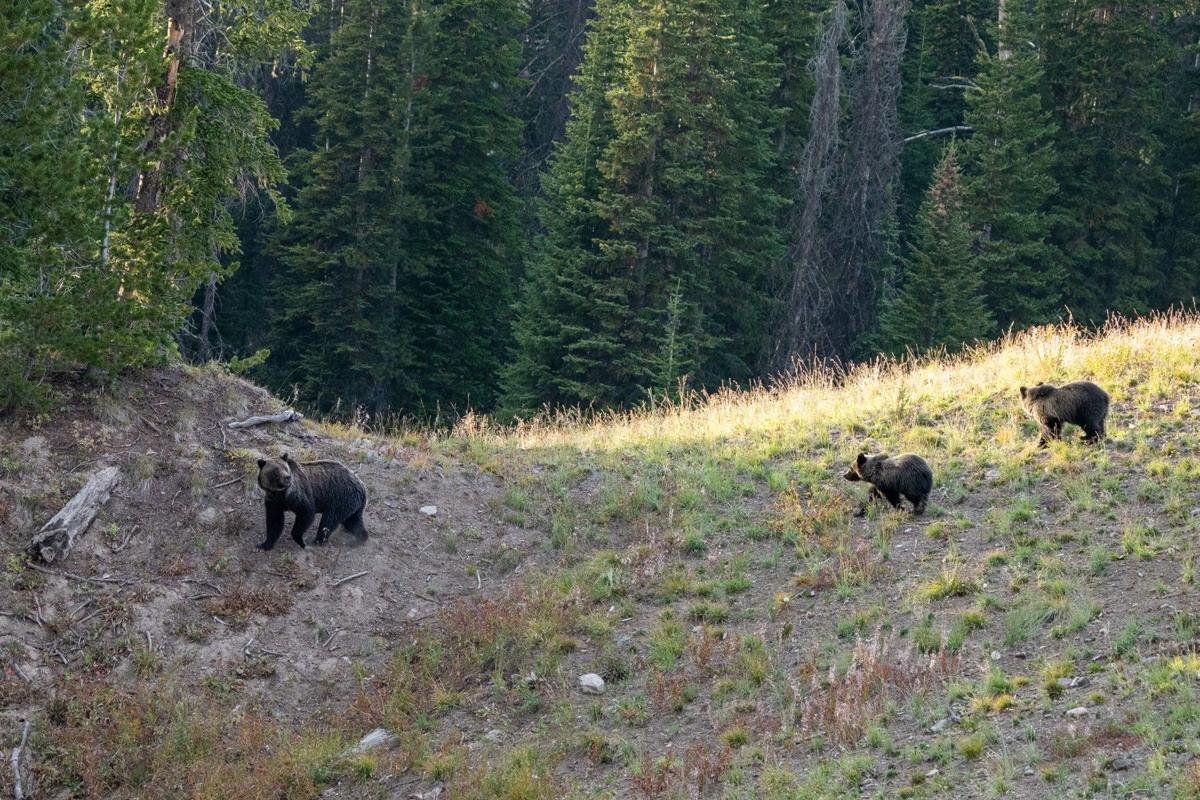 Grizzly 863, more famously known as Felicia, is pictured earlier this month. Nearly four months after Felicia fled a barrage of rubber bullets, beanbags and noisemakers, the bear has maintained her distance from roads, vehicles and people, and has kept her cubs by her side. 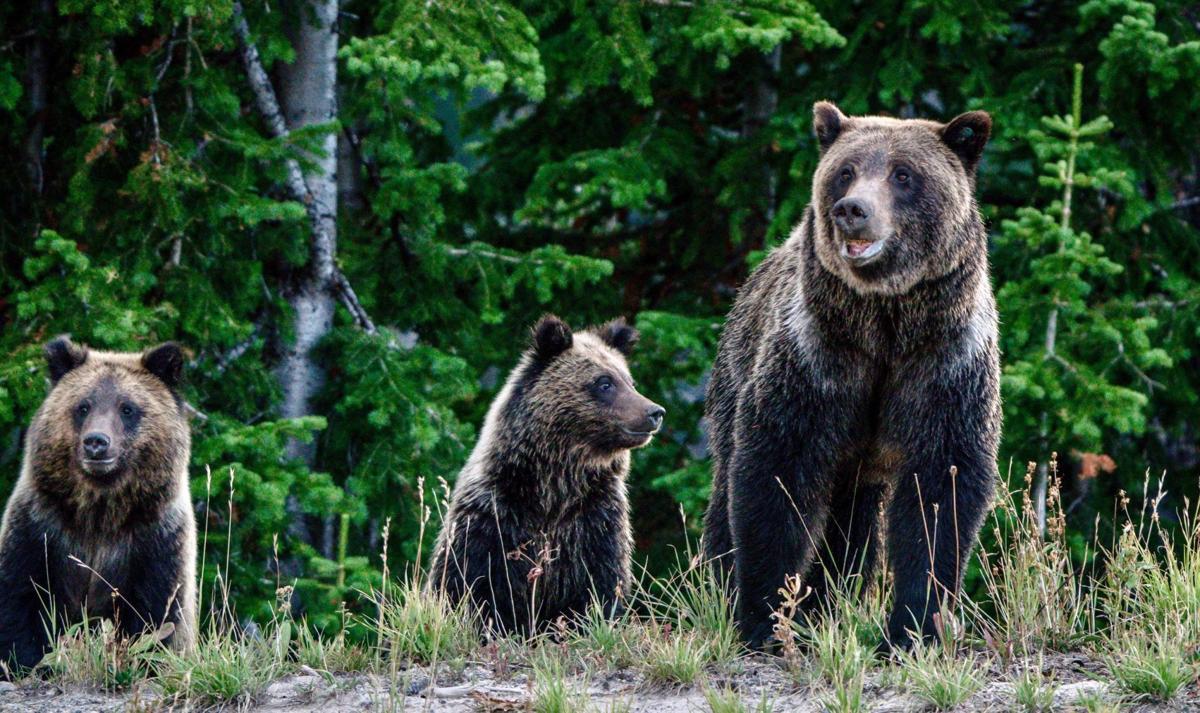 Famed grizzly Felicia and her cubs are pictured Aug. 12 in a remote area. The bear stayed reclusive after being hazed from Togwotee Pass.

Felicia, the mama grizzly bear whose troubles won the hearts of the Internet, has successfully shepherded her cubs through a perilous summer.

Her fans miss seeing the little bear family grazing and frolicking along Togwotee Pass. But they hope, for Felicia’s sake, that she’ll stay out of sight.

This spring, record numbers of tourists were already clogging the roads around Wyoming’s national parks when Felicia emerged from hibernation with two fuzzy, bumbling, roly-poly cubs, and established herself by the side of the highway. Passersby were mesmerized. Bear jams proliferated.

The congestion wasn’t just a nuisance, however. Too many drivers were spotting Felicia and her cubs, swerving to the side of a 55-mile-per-hour highway and leaving their cars to approach the bears — in violation of posted signs that forbade exactly that.

None of the human recklessness was Felicia’s fault. But three different government agencies oversaw Felicia, the highway and the land she inhabited. Those agencies lacked the resources to continually enforce parking laws or uphold the protections that grizzlies, a threatened species, are afforded under the Endangered Species Act. So rather than attempt to manage the people, officials managed the bear.

Rangers typically use pain and noise to train bears to fear undesirable locations. That strategy, known as hazing, separated Felicia from her surviving cub for a month in 2019. Though the two ultimately reunited, the cub didn’t survive the following winter.

When the U.S. Fish and Wildlife Service and the Wyoming Game and Fish Department announced on June 11 that they intended to haze Felicia away from the road, her fanbase panicked.

A single sentence from the press release fueled the outcry: “If hazing does not resolve conflicts on Togwotee Pass, escalating management options include relocation and possibly euthanasia.”

The bear’s supporters got #SaveFelicia trending on Twitter. They started a petition that eventually amassed more than 76,000 signatures. They advocated for an “ambassador” program to let her stay where she was. And they wrestled with their own attachment to Felicia: They wanted to keep seeing her, but they didn’t want to put her at risk.

Amid the backlash, the agency backpedaled on its earlier statement and said that it was not considering euthanasia for Felicia. The clarification didn’t do much to mollify her fans.

Hazing, though less risky than relocation, isn’t a perfect solution. It can cause bears to act erratically around roads, increasing the risk of collisions. It can separate mothers from their cubs — sometimes temporarily, like with Felicia in 2019, and sometimes permanently. But it can also work. In Felicia’s case, hazing has been effective.

Nearly four months after Felicia — known to rangers as grizzly 863 — fled a barrage of rubber bullets, beanbags and noisemakers, the bear has maintained her distance from roads, vehicles and people, and has kept her cubs by her side.

“The hazing and monitoring efforts for grizzly bear #863 on Togwotee Pass have had positive results so far,” the Fish and Wildlife Service said in an emailed statement. “The Service continues to staff the area with biologists who are monitoring #863 and cubs, and hazing when needed. Those monitoring have seen bear #863 less frequently, likely due to the hazing efforts and shifting food sources.”

Felicia and her cubs, though scarce, are doing well, said Tom Mangelsen, a wildlife photographer who spotted — and photographed — the bears during a visit to the Continental Divide last week.

“I just looked down the valley, and there she was about 300 yards away, going up this valley to the east,” he said. “And then she came up to a hillside, and there’s a forest service guy there.”

According to Mangelsen, the ranger wasn’t carrying any hazing equipment. Instead, he just shouted at Felicia and the cubs.

“She obviously was scared,” he said. “And she moved off into the woods and disappeared.”

Rain turns to snow in Casper

Felicia the grizzly draws a crowd. A long-term solution for keeping her and the public safe is proving elusive.

One of Wyoming's famous bears is being hazed to keep her away from spectators along a busy highway. But that effort won't work forever, and a long-term fix has yet to be found.

The controversial hazing of Felicia the grizzly bear along Togwotee Pass has seen initial success and will continue intermittently.

Grizzly 863, more famously known as Felicia, is pictured earlier this month. Nearly four months after Felicia fled a barrage of rubber bullets, beanbags and noisemakers, the bear has maintained her distance from roads, vehicles and people, and has kept her cubs by her side.

Famed grizzly Felicia and her cubs are pictured Aug. 12 in a remote area. The bear stayed reclusive after being hazed from Togwotee Pass.