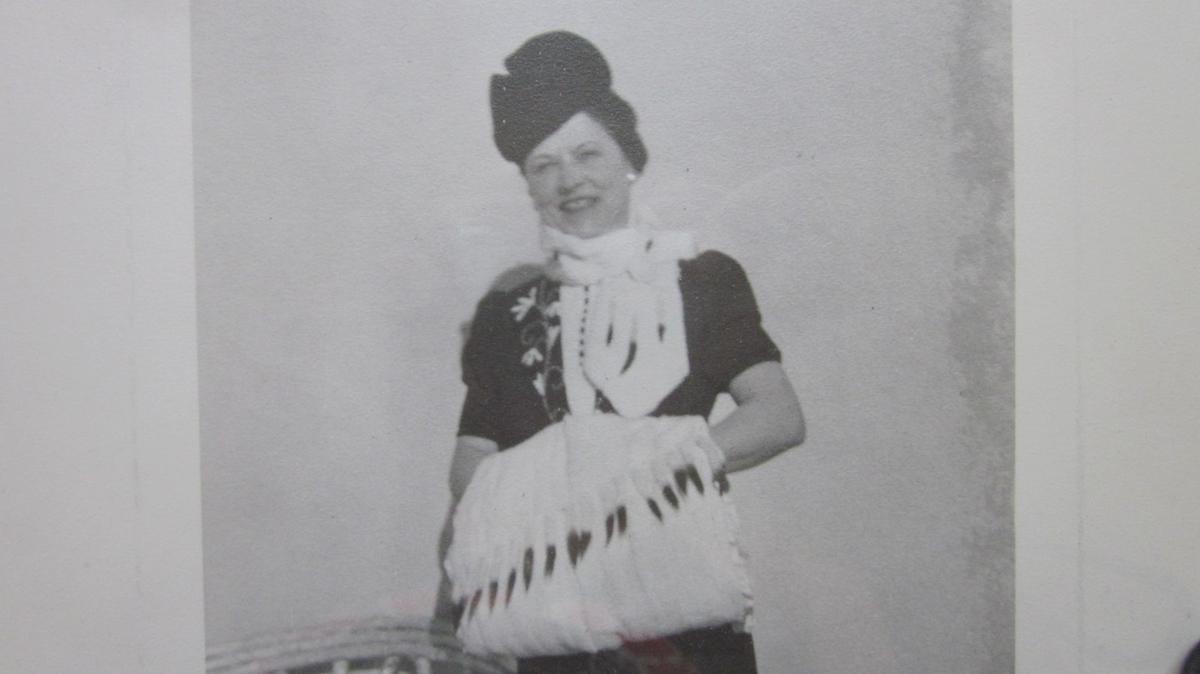 Dell Burke ran her Yellow Hotel brothel in downtown Lusk for six decades. She's remembered most for her business savvy and philanthropy. 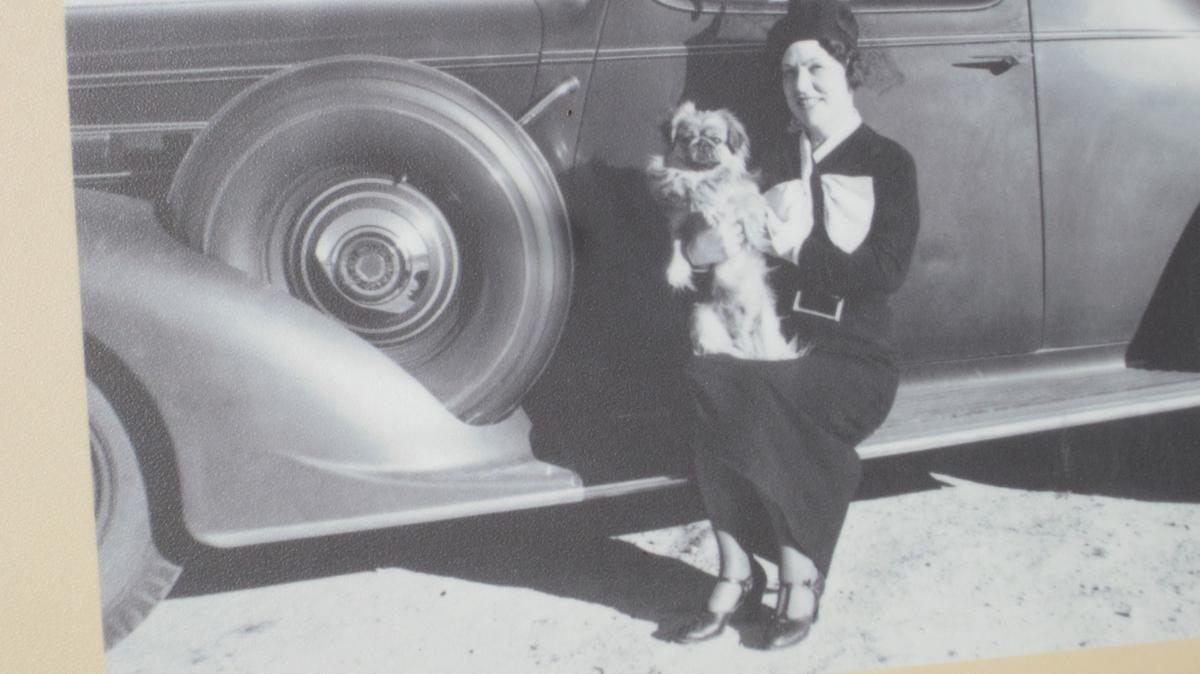 Dell Burke moved to Lusk in 1919 and ran the Yellow Hotel brothel there for 60 years. She was known for her business skill and philanthropy in Lusk, including sending young people to college. She's pictured here with one of her beloved Pekinese dogs.

Dell Burke would stand on the porch of her Yellow Hotel across the street from Lusk’s downtown train depot at 5 p.m. She’d ring a little brass bell to let everyone know her business was open.

Traveling women off the train often mistook the business for a hotel, Burke’s hairdresser Mary Engebretsen said, relaying the story she’d always heard around Lusk in the 2018 documentary “Dell Burke & Her Yellow Hotel.”

“And she would just very pleasantly tell them that they’d be happier if they went up and stayed at one of the other places that was there,” she said in the film.

Burke successfully ran her brothel on Lusk’s main street for six decades. What she’s remembered for most is her business savvy and philanthropy.

Burke loaned money to the town of Lusk during the Great Depression, footed college tuition for locals and gave to charities and churches, according to a 2018 Star-Tribune story about Dennis Rollins‘ 2018 documentary.

“Bordellos existed across the frontier throughout the rough and tumble days of settling the Old West,” the narrator says. “But one of the most famous of them all, the Yellow Hotel in Lusk, operated openly on the main street until 1978.”

Burke was a woman far ahead of her time, Rollins told the Star-Tribune on Wednesday.

“She was a very astute and very tough business person,” he said. “But the thing is, she also had that other side where she was always helping people.”

In 1919, Burke arrived in Lusk with a business partner after stints in Alaska and Casper, according to the documentary.

“They pitched a tent across from the railroad station and announced that they were open for business,” the narrator says. “With the nearby Lance Creek oil boom in full swing, business was good indeed.”

On the same spot, Burke soon opened her Yellow Hotel, according to the documentary.

“She did scholarships, she was very charitable, she gave to all different kinds of organizations, belonged to the farm bureau and the chamber of commerce,” Engebretsen said in the film. “She made sure that there was donations given to all of the churches. She made sure there was no activity at her place on Sunday. It was closed, so that nobody could ever say she kept anybody from going to church. She was a very smart businesswoman. We all know that she was over a millionaire when she left. And it wasn’t because of Dell’s hotel. It was her smart business sense and the way she invested her money.”

Author June Read wrote “Frontier Madam: The Life of Dell Burke, Lady of Lusk“ and was interviewed for the film. Word was that Burke, during the Great Depression, helped the town with crucial repairs for the water and power plant, Read said in the film. She’d recently met a witness of a meeting where Burke helped pay for the town’s power and light.

His account backs up a comment Burke made in answer to talk of her brothel needing to be run out: “Well, you shut me down, I’ll shut down the lights.”

Glenna Madden in the documentary recalled Burke didn’t initiate conversations around town; others had to speak to her first. Hugo Lenz in the film recalled Burke “was quite a lady” and would simply smile and wink as she passed on a street.

She required the same discretion — as well as class in dress and conduct — from all “her girls,” people from Lusk recalled in the film.

In the film Read told a story of one employee who greeted a local by name: “And the wife was standing next to him and looked at Dell and looked at her, and the young lady in question was on the bus very, very soon.”

When two employees returned after a night out of drinking and had tried to seduce young men, Burke met them with their suitcases and took them to the bus station.

Burke asked hairdresser Engebretsen if she was comfortable with serving her or her employees and whether they should come in the back door of her shop. Engebretsen told her to come in like any other customer, and Burke treated her better than some clients who would cross the street if the Yellow Hotel owner happened to be out there, Engebretsen said in the film.

Despite keeping a low profile, Burke had subtle ways of advertising. She’d send new employees out to shop for a small item at a store while carrying her dog, Read said in the film.

“And the men all knew that this meant there was a new girl over at Dell’s hotel.”

Burke traveled often, including with a friend turned into a fiancé, Engebretsen said in the film. Right before they planned to be married, Jerry Dull died suddenly.

“And I thought, how sad, that she finally had found someone and they couldn’t have spent more time together and continued their life,” she said. “Because at that time, Dell didn’t need to run the hotel. She had enough money. She just could have retired and traveled. But without Jerry to travel with, then she just stayed there in Lusk and lived out the rest of her life.”

Rollins has continued to come across people with more stories about Burke since releasing his documentary. One told him of a relative who was a foreman at the Lance Creek oilfield and would bring his crew into town for a nice dinner and drinks. He wasn’t welcome in Lusk’s restaurants because he was Native American, Rollins said. The man went to the Yellow Hotel instead, though not for its famous pleasures.

“But Dell would invite him in, and he would just sit in the parlor and smoke a cigar, drink some coffee, maybe have a bowl of soup and visit with Dell or whoever was in there,” Rollins said. “… And his wife actually went to Dell Burke and personally thanked her for being kind to her husband when other people in town wouldn’t.”

Denver Post reporter Red Fenwick wrote a column about Burke shortly after her death in 1981, describing his friend of more than 25 years as one of the wealthiest women in Wyoming and “certainly one of the most charitable,” Engebretsen relayed in the film. His column included his inscription to Burke in her copy of his book: “To a lovely little lady in red velvet, who perhaps more eloquently than any other woman can testify to the the masculinity of a true masculine state, Wyoming.”

In Fenwick’s eulogy column, she said, he hailed Dell Burke as “a living legend.”

December marked the 150th anniversary of women's suffrage in Wyoming — a first in the United States. To mark this historic event, the Star-Tribune is publishing 40 profiles over the course of a year of women, both historic and contemporary, who've left their mark on our state. The series will not only examine the contributions these women made to Wyoming, but also the personal characteristics that helped them succeed. Look for it on the front pages of our Sunday editions and online at Trib.com.

Watch Now: Trump goes to court to get his Twitter back

There was no back door on Lusk’s old Yellow Hotel when Dennis Rollins decided to take a look. There wasn’t a “no trespassing” sign either, so …

Story of Wyoming madam in song

Musician Cory McDaniel tells the story of Wyoming madam Dell Burke through story and song in his upcoming show. Costumed cast members from the…

The first thing Dennis Rollins does when he’s putting together a show for Casper’s public access channel is set the scene.

By starting small, Wyoming communities are building a future beyond the boom and bust

It began as a small — but booming — cattle town, the playground of big-time rancher Frank S. Lusk and a prominent stop on the Wyoming Central …

Dell Burke ran her Yellow Hotel brothel in downtown Lusk for six decades. She's remembered most for her business savvy and philanthropy.

Dell Burke moved to Lusk in 1919 and ran the Yellow Hotel brothel there for 60 years. She was known for her business skill and philanthropy in Lusk, including sending young people to college. She's pictured here with one of her beloved Pekinese dogs.