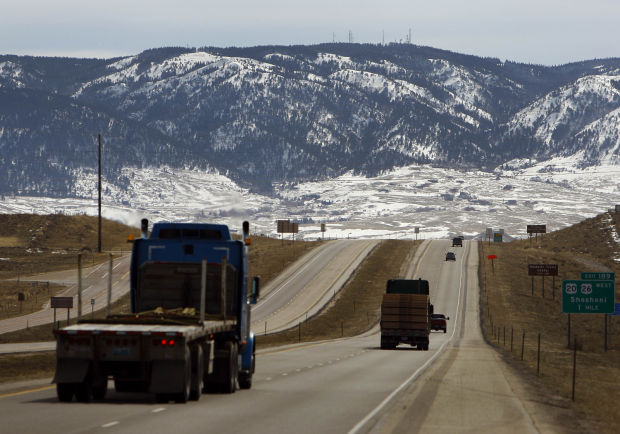 Traffic moves on southbound Interstate 25 just outside Casper on Thursday afternoon. The Wyoming Highway Patrol issued more speeding citations to out-of-state drivers in both 2011 and 2012. 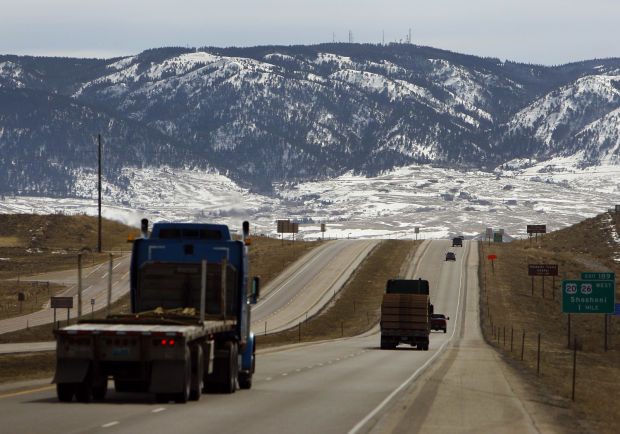 Traffic moves on southbound Interstate 25 just outside Casper on March 20, 2014. A report suggested Wyoming is falling behind in adopting key safety laws for highways. 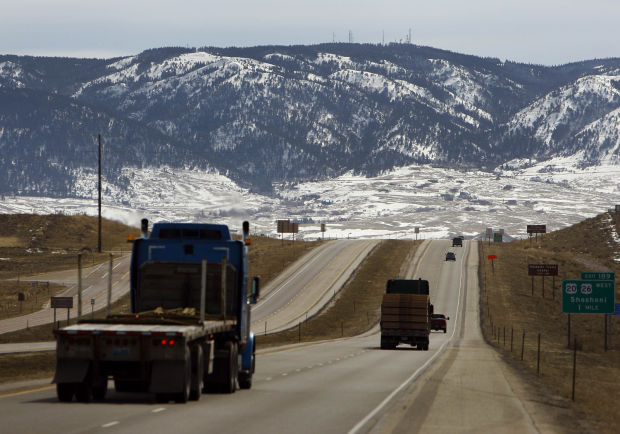 just outside Casper in 2014. Wyoming ranks last in the nation for response times for road emergencies, according to a recent study.

We’ve all been there. A drive on the wide-open interstate is interrupted by flashing red lights and the blare of a siren.

A quick look at the speedometer confirms one thing: the likelihood of a speeding ticket.

Whether the run-in occurs in Wyoming or another state, it feels similar to a punch in the gut.

And an analysis shows that drivers whose license plates aren’t adorned with the Tetons and the bucking horse are bearing the brunt of speeding citations issued by the Wyoming Highway Patrol.

Wyoming drivers do tally more tickets per capita than their counterparts in any other state or territory in North America. But the preponderance of tickets issued by the Highway Patrol here go to out-of-state drivers.

In 2012, it was more of the same. Wyoming drivers received 21,225 speeding tickets, compared with 39,596 for drivers from other places in North America.

“We don’t base our enforcement action on what (the) plate (is) and where the people are from,” he said.

Butler said tourists who get nabbed for their heavy feet sometimes complain and vow never to return to the state.

“Any time you’re driving outside of your home state, you need to be careful for aggressive law enforcement,” said John Bowman, spokesman for the Wisconsin-based National Motorists Association. “It doesn’t surprise me that Wyoming issues more tickets to out-of-state than in-state drivers. It comes down to practicality.”

Bowman said drivers traveling outside their home state are easy pickings for law enforcement because they are less likely to contest a speeding ticket in court. It’s a “slam dunk,” he said.

“If I am a Wisconsin driver and get ticketed in Wyoming, most likely I won’t be traveling back to the state for a court appearance to contest the ticket,” Bowman said.

The states that tallied the most tickets in Wyoming were Colorado, Utah, California, Montana, Idaho and Texas.

Among Wyoming drivers, it’s well known that the sight of Colorado and Utah plates proves worrisome.

“If you don’t keep up with the traffic in Denver, you will get run over,” Butler said.

Even though Colorado earned the most out-of-state tickets, Butler said Utah drivers tend to be even wilder on the road.

“They tend to think it’s OK to drive five or 10 miles an hour over the limit,” he said. “I don’t know what it is with them.”

A quick Google search for “Wyoming speeding tickets” speaks to the multitude of out-of-state drivers ticketed in the confines of the state. One of the top questions is whether points and fines will transfer from one state to another.

Fortunately for those drivers with a tendency to put the pedal to the floor, Wyoming doesn't have a point system, said Jeff Goetz, a spokesman for the Wyoming Department of Transportation.

But Wyoming does have a driver’s license compact with 44 other states (the exceptions are Wisconsin, Tennessee, Michigan, Massachusetts and Georgia). The agreement calls for states to notify one another when law enforcement tickets a driver.

States that participate in the compact will suspend drivers' privileges in their home state if the person is cited in another state and fails to appear in court or pay a fine.

The infraction will appear on the driving history in the state in which they were cited, not on their home state's driving record, said Sgt. John Townsend, spokesman for the Highway Patrol.

Butler’s advice for those who like to hightail it on the open road is simple: Follow the law.

He and his colleagues have heard a litany of excuses in their combined years on the job. So many, he said, the patrol “should write a book.”

He doesn’t recommend the hospital excuse. If someone says he or she is in a hurry to make it there, the patrol calls medical officials to verify.

The bathroom excuse doesn’t work, either, he said. And he added: “I’ve seen people get out of their car and go after we pull them over.”

Traffic moves on southbound Interstate 25 just outside Casper on Thursday afternoon. The Wyoming Highway Patrol issued more speeding citations to out-of-state drivers in both 2011 and 2012.

Traffic moves on southbound Interstate 25 just outside Casper on March 20, 2014. A report suggested Wyoming is falling behind in adopting key safety laws for highways.

just outside Casper in 2014. Wyoming ranks last in the nation for response times for road emergencies, according to a recent study.