The Wyoming Legislature still doesn’t have a date for a special session planned for later this spring to respond to COVID-19 and its economic fallout. Lawmakers still don’t have a true agreement with Gov. Mark Gordon on how to spend more than a billion dollars in emergency funding before it expires on Dec. 30. And they haven’t figured out a means of expanding access to health care for thousands of uninsured Wyomingites.

But as of Friday, they do have a starting point.

As the week ended, members of legislative leadership put their stamp of approval on a wide-ranging plan to help mitigate the worst impacts of the COVID-19 crisis. The multi-bill package – which will be voted on in the special session – will direct $1.25 billion in emergency funding provided under the federal coronavirus relief act to multiple programs intended to address the economic implications of the COVID-19 pandemic.

Provisions covered by the bills include language to establish an eviction avoidance program under the Wyoming Community Development Authority and millions of dollars in spending for state capital construction, expanded worker’s compensation and unemployment benefits. There are also significant dollars to assist communities, nonprofits and other agencies to help offset COVID-related expenses stemming from the state’s public health orders to contain the virus.

That plan, introduced by Gordon for the first time Friday morning, proposes three targeted phases of funding, with the first covering everything from food banks to the eviction avoidance program.

While lawmakers seemed wary of the program at their initial meeting on April 24, the legislative and executive branches appear to be close on a deal to get money flowing to the state’s small business sector through a number of targeted grants. However, the two sides still remain distant on a number of key issues, including the amount of money involved and the businesses that could potentially qualify for funding from the state.

Under Gordon’s plan, $575 million of that federal relief funding would have been unleashed immediately, with $350 million committed to assisting small businesses of 50 employees or fewer, including $225 million in the first few months and $125 million coming later in the summer. However lawmakers, without an understanding of the amount of demand the program could attract, seemed unwilling to commit to such a large appropriation right out of the gate.

There could also be some hangups with the businesses Gordon wants covered under the program. That funding pool, he said, could potentially include some segments of the energy sector – particularly mining operations – whose financial situations were precarious even before the COVID-19 outbreak.

Gordon said his program – which is currently under development with the Wyoming Business Council – would closely track the funding to ensure oversight. The governor stressed to lawmakers that while all businesses were vital to the state, he had some concern with “bailing out large companies” that may not necessarily need funding. That proposal, he told lawmakers, was intended to try and keep skilled workers from leaving Wyoming, potentially putting the state in a better position for recovery.

“We don’t want to lose our mining communities,” Gordon said in a press conference on Friday afternoon. “We want to make sure our oil field service people are still in business. We want to make sure that our tourism industry still has people that work there.”

However, state lawmakers chose to remove mining operations from coverage under their initial phase one funding plan, saying that money could eventually be weighted in during later meetings, and could likely be used only for expenses directly related to containing the coronavirus, including the cost of personal protection equipment and other measures for improving workforce safety.

That decision, it seemed, was a continuation of the more moderate spending proposals favored in early discussions by state lawmakers. While Gordon stressed that his spending recommendations were merely starting points, his suggestion to significantly front-load emergency spending with $575 million was greatly tempered by members of Management Council in the final version of their spending bill draft released Friday, which back a more moderate, $450 million spending package in phase one.

It has been a recurring theme for lawmakers over the past several weeks, who have openly acknowledged a natural tension between the two branches of government that has arisen throughout the process.

“We’re under a state of emergency, we have the money in hand and the governor has the ability to act in a state of emergency,” House Minority Leader Cathy Connolly, D-Laramie, told the Star-Tribune earlier this week. “We’re glad about that. If there’s a flood or a tornado or something like that, of course we want the governor to act and use the resources he has available. But we also understand and expect that we as a Legislature are responsible for appropriations, for standing up programs and for funding those programs.”

While the process could potentially serve to stymie the distribution of much-needed emergency funding, Gordon said the interplay between the executive and legislative branches of government was critical to the response to the crisis.

“I don’t believe there’s ever been a greater need for us to work together or in a way that perhaps none of us anticipated we ever would have to,” Gordon told lawmakers Friday morning. “But I do believe if we do, we can remain nimble, targeted, responsible, trackable and make a huge difference for our citizens.”

Access to health care, meanwhile, remains a question mark. Gordon said he would be unwilling to make any unilateral policy decisions regarding health care. At the same time, he told reporters that at this point, all options – Medicaid expansion included – “are on the table.”

However, he urged caution in any solution that might come up, stressing that responding to an emergency scenario should not leave the state on the hook for bills it could not afford to pay long-term.

“At this point, we want to make sure that our Wyoming citizens get the chance to get the health care they need,” he said. “I’ve certainly said before, and will say again, that my concern is that we not build in an escalator that we cannot afford over time. So in talking with our legislators and talking with our programs, I think there is a menu of choices.”

Eviction assistance is coming for Wyoming renters. Here’s what the plan could look like.

The state is working on a plan that would compensate landlords whose tenants can't make rent -- provided they don't evict them.

The plans include money for hospital improvements, small business assistance and eviction protections for renters.

The decision leaves many states whose economies have effectively been shut down with major revenue shortfalls due to sales tax losses and diminished industrial activity.

UW to get $6.6 million in student aid from federal government as school prepares to cut budget

The university is also examining its options for the fall, which might include moving large lectures online and boarding one student to a dorm room.

The latest: Coronavirus in Wyoming

The Star-Tribune will update this page throughout the weekend with the latest news regarding coronavirus in Wyoming.
Wyoming News

The special session will convene May 15. Lawmakers will consider how to spend money provided to the state through the federal coronavirus relief act.

If approved, the COVID-19 business relief bill would create three programs to supply Wyoming businesses with money to survive during the economic downturn.

Lawmakers will gather Friday to decide how to spend $1.25 billion. Some worry the public will have difficulty participating in the process. 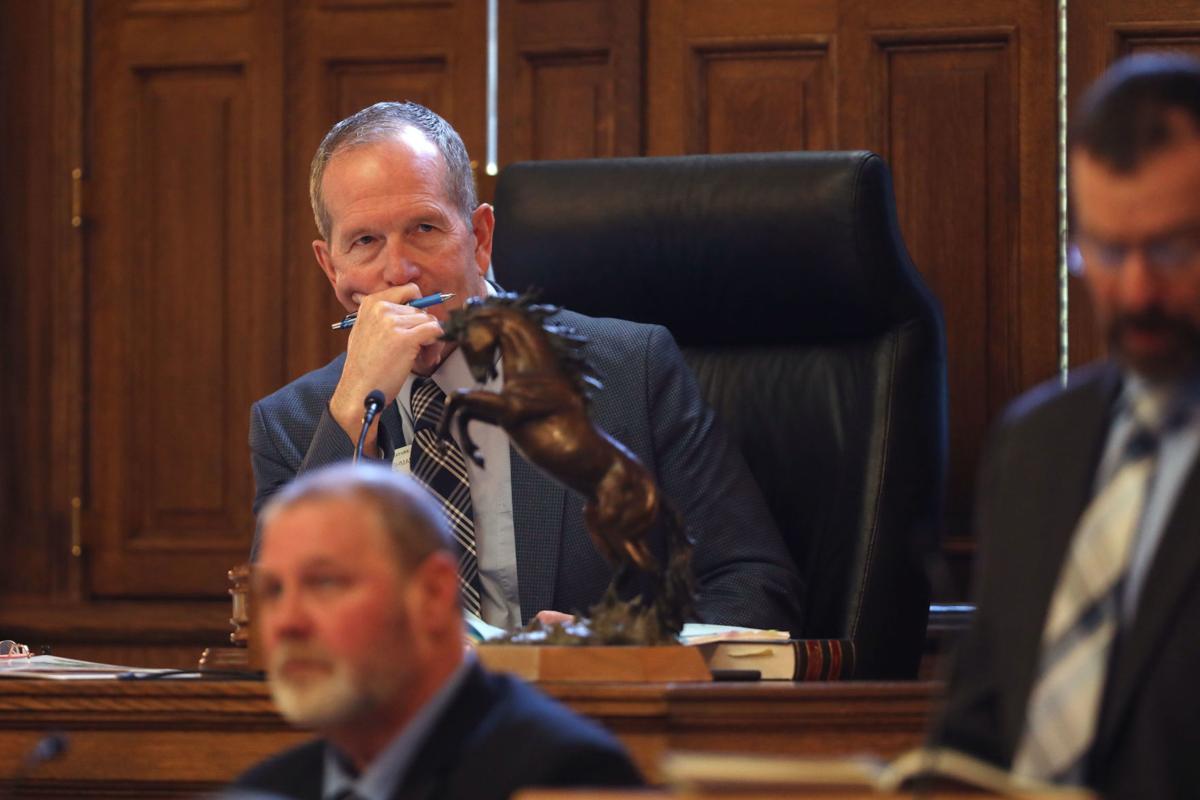 Speaker of the House Steve Harshman presides over a Feb. 11 legislative session in Cheyenne. State legislators have approved a draft COVID-19 response plan. 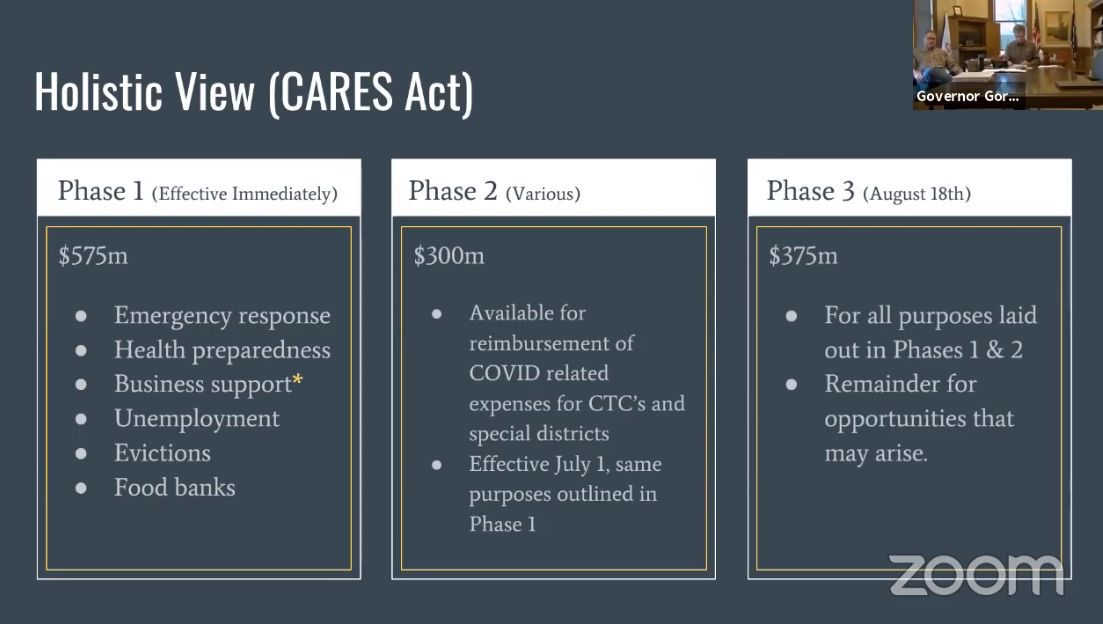 Gov. Mark Gordon's three-phase plan to implement $1.25 billion in emergency CARES Act funding throughout the state. While the Legislature favored most of the proposals included in the plan, it still remained fairly distant from the governor's positions on Friday afternoon.