Marilyn Kite was living in Jackson, working as an attorney and raising her son when she got the call.

Justice Richard Macy was retiring. The Wyoming Supreme Court would have an opening. Would she consider it?

It felt impractical. Her family had just moved to Jackson and settled into a new home and jobs. Her 6-year-old son was in school. She couldn’t move everyone back to Cheyenne.

But a woman had never sat on the Wyoming Supreme Court. It was time.

So she applied, went through a series of interviews, explained that she would commute the 450 miles from Jackson to Cheyenne once a month to hear cases. Then in 2000, Kite became Wyoming’s first female supreme court justice.

For her, requiring or pressuring justices to move to Cheyenne embodies what has kept women from rising into senior positions in so many fields.

“I have told governors and commission members since then that it discourages women,” she said. “It’s usually harder for women to get the rest of the family to move than it is for men.”

But it was her presence, her willingness to apply, and her doggedness in her career that helped pave the way for countless other women in Wyoming’s judicial system. Ultimately, she said, that matters most because it allows those appearing before the court to see more of themselves in the people making decisions on their lives.

“No one starts out (on a court) thinking they’re going to save the day for women, and you better not start out that way, but as you wrestle with difficult questions and societal issues, it’s important you have different perspectives,” she said.

In 2020, Kite’s path may seem pre-ordained. The court was ready for a woman to serve, and she was the logical choice. But when she started law school at the University of Wyoming in 1971, a woman lawyer was anything but normal.

“Our law school class was extra big for that time,” Kite said. “They ended up with 125 freshman and only about six of us were women. You stuck out.”

In fact, of all the attorneys in the Wyoming State Bar, she counted only five or six who were women.

Kite was born in Laramie in 1947, the daughter of a dentist and housewife. Her father’s mother came to Hanna in 1902. Her mother’s mother homesteaded in a town outside Daniel around that same time.

She went to UW to study international affairs, but then realized most jobs in that field would require moving from Wyoming. Her Wyoming roots ran too deep. She couldn’t leave. So she interviewed with an oil and gas company and a landman there suggested she go to law school.

“I couldn’t visualize that,” she said, mostly because she hadn’t seen female attorneys. “But I remember going to my college political science adviser and asked if it was something I could consider, and he was furious with me. ‘Of course it was,’ he said, ‘and of course you should.’”

Her older brother applied the same time after several years in Vietnam and the two joined the freshman class.

“I never had anything but encouragement from the faculty and the students, and I didn’t feel any discouraging feeling or unwelcome feeling,” she said. “I did feel like we were an oddity, not a lot of us in the picture.”

From there she went to the attorney general’s office and, in retrospect, got lucky. Wyoming’s Environmental Quality Act had just been passed and no one was versed in that kind of law, and Kite was assigned to the job.

“I joked it was a place I could do the least damage,” she said. “But that was a real godsend because it allowed me to become an instant expert and that led me to a really wonderful career in something I enjoyed.”

She left the attorney general’s office then for a position with Holland and Hart, a regional law firm expanding into Wyoming. And there she stayed for more than 20 years until she got the call.

Retired Supreme Court Justice Bill Hill was one of the people who encouraged her to apply. They met in high school on their respective student councils (he from Riverton, Kite from Laramie). They went to UW undergraduate school together and were in the same class at law school. They even commuted from Laramie to the attorney general’s office in Cheyenne together.

Their friendship didn’t mean they always agreed, but they held the same mutual respect.

“It seemed to me history was about to be made,” Hill said. “And I thought truly she was the one to make it.”

Kite rarely faced discrimination for being a woman. During her 26 years before joining the bench, she occasionally had people assume she was there to fetch coffee, not to sort out a complicated legal issue.

She would have to readjust meetings with clients because some lunch clubs would only allow men.

But for the most part, she was treated with respect and sometimes as a novelty.

And now most law schools are split evenly between men and women — some even have more women enrolled. The Wyoming Supreme Court has three female justices and two male.

The same cannot be said for other branches of Wyoming’s government. The Wyoming Legislature has very few women serving and county commissions are even worse. Even department heads in state government are largely men.

She blames some of the disparity on societal expectations of women that make it harder to rise through ranks, like difficulty with child care or even difficulty moving a family for a woman’s career.

Some of those issues may never go away. But Wyoming is making strides in creating groups to support women, organizations like CLIMB Wyoming, Leap Into Leadership or even the Wyoming Women’s Antelope Hunt, which Kite helped form. 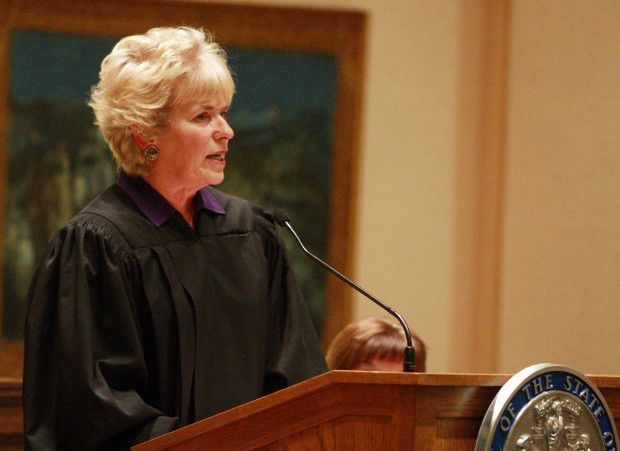 Wyoming Supreme Court Chief Justice Marilyn Kite addresses a joint session of the Wyoming Legislature in 2013 in Cheyenne. Kite was the first woman to serve on the state's highest court.